Twitch has once again found itself at the center of several sexual harassment allegations after multiple high-profile streamers have been accused of sexual misconduct. What started with an accusation against Lono “SayNoToRage” from streamer JewelsVerne has led to an outpouring of support and similar accusations against Lono. Other popular streamers have had similar accusations arise since JewelsVerne shared her story, leading to Twitch making a public statement addressing the harassment occurring on its platform.

Lono and the apology video

Lono, who does not share his full name online, has since apologized for his actions in a video released on his YouTube channel. That video replaced a now-deleted video Lono shared on Twitter after he decided it felt “insincere” and appeared to make him a “victim.” Streamer SheSnaps had a similar story with Lono, where after dinner and drinks with a group during a convention, alleged harassment and unwanted advances from Lono occurred.

In his video, titled “An Apology,” Lono detailed the events of the alleged encounter with SheSnaps. “To me, I think it’s important to distinguish this category that I went to these events and (behaved) a way that is indefensible. But I did not, in my recollection of these events, and in my memory, I did not harass and seek out and persist in unwanted advances.”

Lono then stated that he does not believe that his actions qualify as harassment after giving his story of the night and the actions that he made. Lono’s defense of his actions boiled down to being “far too comfortable and intimate with my conversations and statements.” SheSnaps stated on Twitter that Lono’s video was “quite a non-apology” and the video was just “fake tears and entitlement.”

How can Twitch work to create a safer environment for streamers?

In response to the accusations against Lono and the numerous other streamers and industry members, Twitch released a fairly tepid announcement. 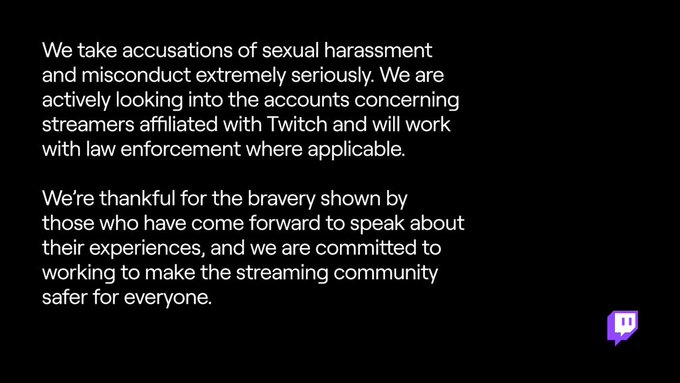 The stance Twitch is taking is good; however, many are not buying it.

Music streamer YourStarling claimed that in an all-hands meeting with Twitch a year ago, CEO Emmett Shear was flippant when the topic of sexual abuse came up. When Shear was asked specifically about YourStarling and her alleged abuse, he allegedly responded with, “Wow, the things that go on on our platform, can’t really comment,” before moving on. The information reportedly came from someone at Twitch who risked violating an NDA by sharing it. YourStarling accused Twitch and Shear of being aware of a system of abuse at Twitch but chose to ignore it.

Former vice president of community and partnerships Justin Wong corroborated this system of compliance for abusers at Twitch:

I was a VP at Twitch and I reported this to the relationship-owning VP, the head of HR, and the CEO. All assured me it would be handled. Next year he was in the same VIP space at the same Twitch event. I was told he was the VP’s uncle and an “important” initiative launch partner. https://twitter.com/sampai/status/1274910389138935808 …

These are empty words considering you, as a company, minimized and dismissed my sexual harassment and continued to let the predator attend your events and gave him live segments at E3 on your official channel. https://twitter.com/Twitch/status/1274900083369115649 …

What steps Twitch will take next are unknown. In 2018, in response to user demands for clearer and stricter community guidelines, Twitch released a series of updates to better protect its users. These updates were focused on bringing more attention to Twitch’s anti-harassment and sexual content policies. Twitch even told one user to “Please watch us closely and hold us accountable.”

Now is the time to hold Twitch accountable.

Related posts:
06/24/2020 eSports Comments Off on After multiple harassment allegations, Twitch needs to do better
Hot News
Nvidia GeForce Ampere may arrive on August 31, tweet suggests
6 Personal Injuries That Require You to Hire a Lawyer
Dirt 5 Pre-Order Guide: New Release Date, Next-Gen Upgrade Details, Bonuses, And More
New Animal Crossing Summer Items Available For A Limited Time
FFXIV 5.3 Update Is Live With Free Trial, Revamped Questlines, Job Changes, Nier Automata Raid
Recent Posts
This website uses cookies to improve your user experience and to provide you with advertisements that are relevant to your interests. By continuing to browse the site you are agreeing to our use of cookies.Ok