Apex Legends broke a new record over the weekend, as its concurrent player count on Steam was the highest it’s ever been. In the weeks leading up to Season 8, players are hopping on the battle royale more than ever. However, it’s on Steam that sees the higher player count, which is quite surprising given how new the game is to the platform. Of course, it’s well-documented most players like the Valve-owned platform more so than others. Still, this bodes well for the launch of Season 8, which could see a new all-time player count when it launches on February 2.

Perhaps players are merely excited about the new season or want to get as much content as they can out of Season 7. The spike in Steam players started around January 15 and has been climbing ever since. Most days, the highest concurrent player count reaches well over 100,000.

For what some consider to be a “dead game,” that player count is extremely strong. Although, players could just be watching the trailers for Season 8 and getting hyped to play Apex Legends again. In the weeks following the arrival of a new season, the player count does begin to dip slightly as the excitement wears off.

However, Apex Legends has never seen this amount of players online before. Steam Charts is perhaps the best measurement for how “alive” a game is and according to it, the EA battle royale is alive and well. 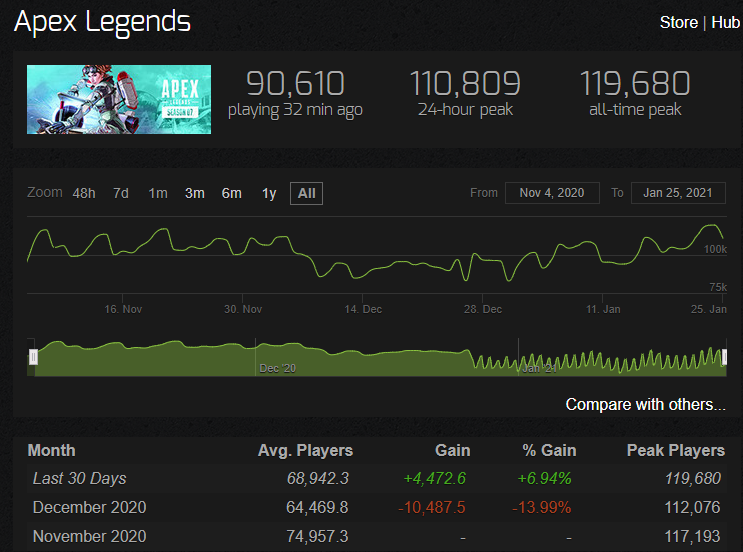 On Sunday, Jan. 24, Apex Legends saw 119,680 concurrent players at one point. That broke the previous record by several thousand and just proves that the BR still has a devoted fan base. It will be interesting to see if the new record is once again broken when Season 8 launches. If players are this excited now, imagine how excited they’ll be when they get their hands on the new content.

Make sure to keep up with Daily Esports for all Apex Legends news.