The Fortnite Champion Series continues in week two, we take a look at who qualified for round three in all competitive regions.

Week two of the Duos Fortnite Champion Series is in full swing as the world’s best attempt to claim a chance to participate in the FNCS finals. Several highly regarded duos managed to secure a qualification last week but will continue to perfect their game nonetheless. Despite some unfair tactics out of NA East last week, the competition rolls on as we approach the halfway point of this FNCS season. The semi-finals this week produced some massive lobbies with talented players from top to bottom. Check last week’s article to see who qualified for heats. Let’s take a look at how the landscape looks across all seven regions heading into the week two Fortnite Champion Series final.

The ever-improving duo of FaZe Mongraal and NRG benjyfishy claimed first place in the European FNCS week two semi-finals. They managed a ground-breaking 67 eliminations over nine matches with three Victory Royales. Benjy and Mongraal continue to improve and are still seeking their first win, which could very well come tomorrow in the week two finals.

MCES Andilex and LeStream Nayte continued their impressive gameplay with yet another top finish in the European region. They’ve been dominating seemingly all areas in the newly introduced Daily Duo Cups and fell only two points short of first place in the semi-finals. 100T MrSavage and IDrop 74 also made a top-four appearance and will play in the finals for the second consecutive week. 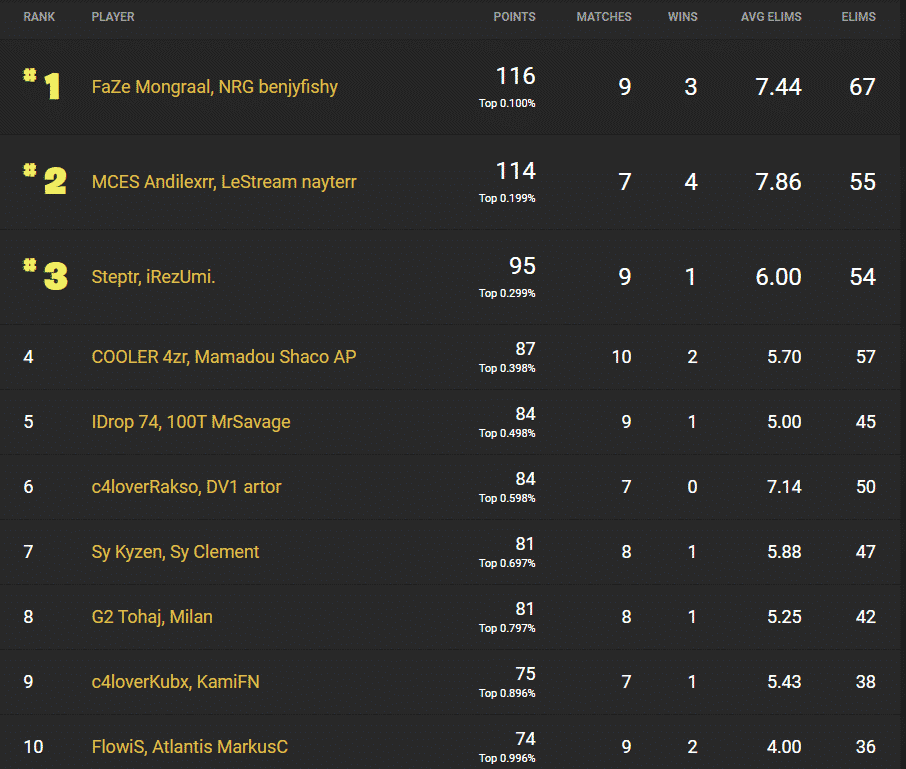 Cheech and cheech, also known as Innocents and Ajerss racked up 106 points en route to a semi-final victory. This controller tandem put up 63 eliminations across eight matches, reminding us of their Winter Royale performance from last year. NRG Unknown and BBG Ronaldo followed Innocents and Ajerss with 101 points and two Victory Royales.

MSF Clix and Vanguard Calc made their first leaderboard appearance this season with 88 points and three Victory Royales. There is a slew of talented teams who will duke it out in the finals tomorrow. Another twenty duos will find their way into NA East heats in April. 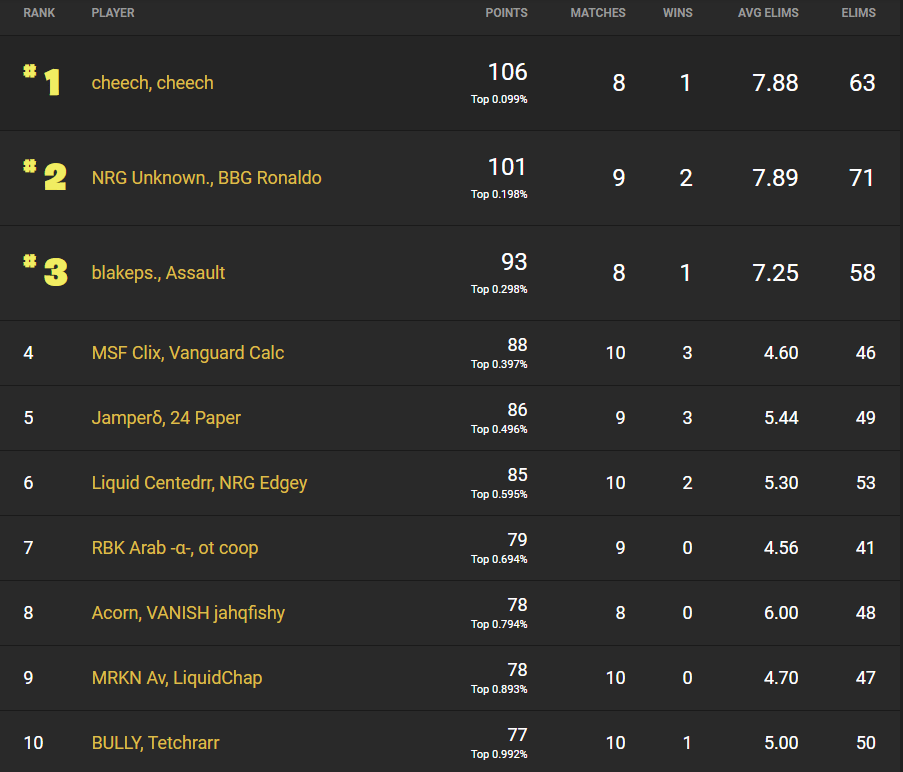 The Fortnite Champion Series week two semi-finals saw 100T Kyzui and Hokage Domi take first place. The two earned 103 points with four Victory Royales and 63 eliminations. After a quiet week one, these two made a statement heading into session three. The controller duo of Thomuss and wavyjacob achieved another high placement in NA West with 93 points and 66 eliminations. 100 Thieves’ players Arkhram and Rehx finished top-ten with their respective duos. 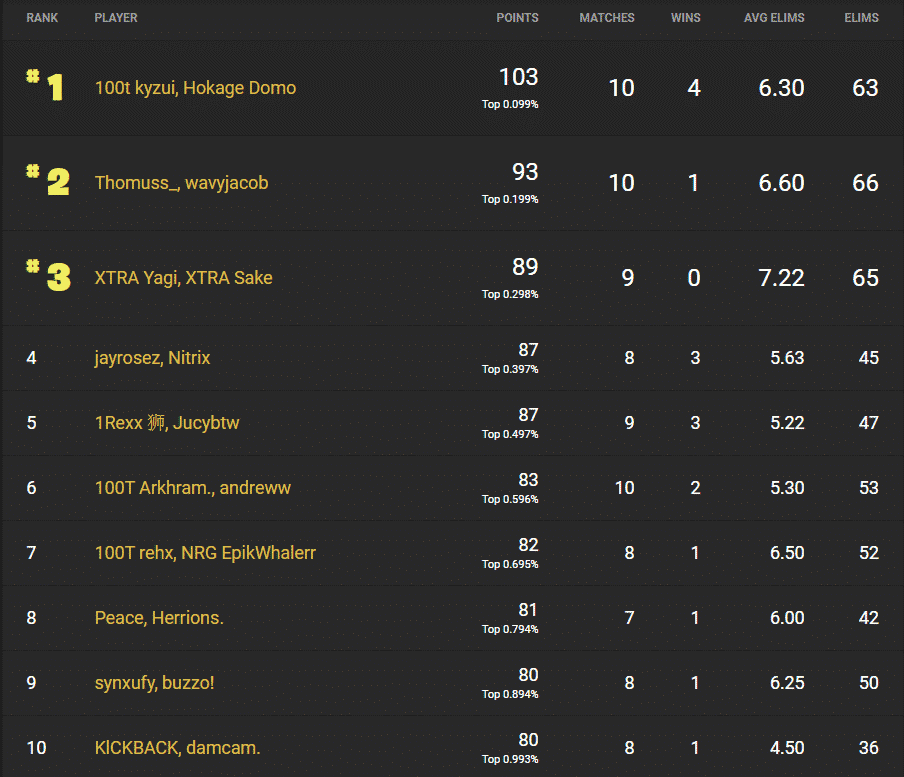 Tired and jhk earned 107 points in the OCE FNCS semi-finals and finished in first place. This duo won four matches overall, which no other team could rival in week two. Caryion and Volx managed another high finish as well after taking third in the finals last week. The top Oceania teams will engage in yet another pulse-pounding finish tomorrow when we see the next round of qualifiers. 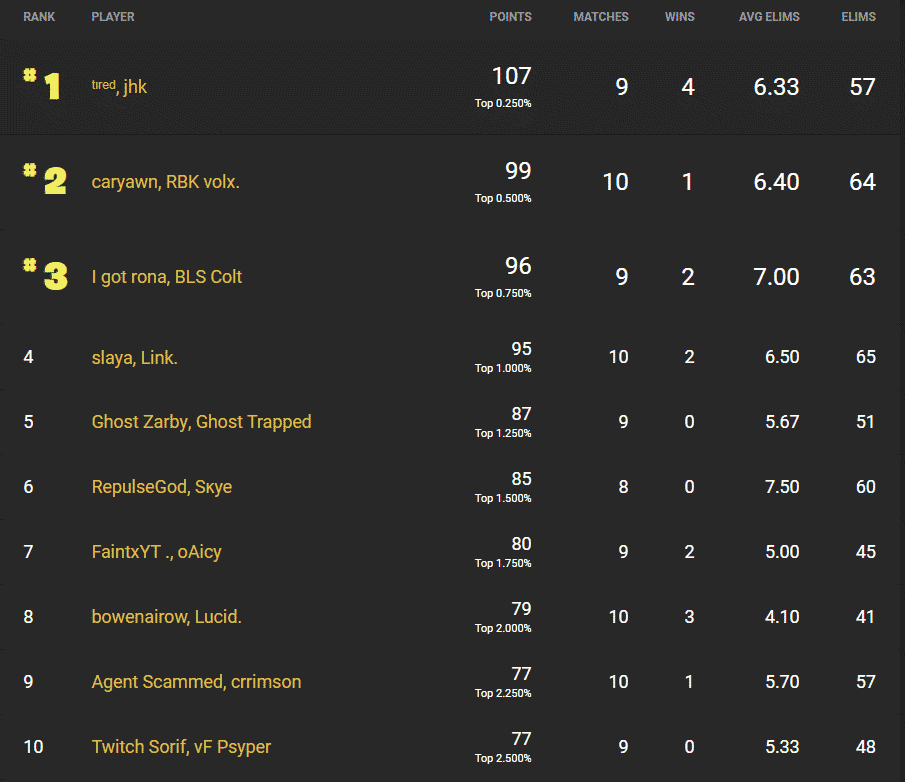 Week two of the Brazil FNCS semi-finals saw a two-way tie at 87 points. DC MysticK and DC OPai ultimately took first place due to their four Victory Royales in the tie-breaker. They had ten fewer eliminations than second place, but victories made the difference here. Lekmaluco and washed came up just short of first, but points will only matter in the finals as 20 more duos will punch their ticket to the FNCS heats. Fortnite World Cup standout, king and duo partner rustyk, managed a third-place finish in semi-finals. 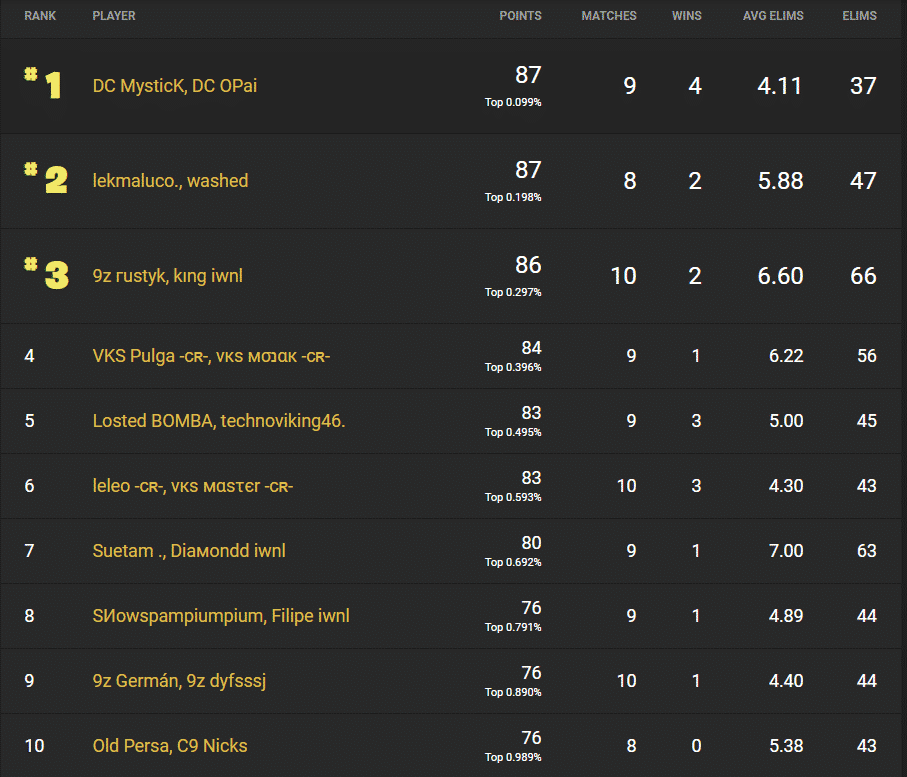 !ettuce and GW Hamuppi secured themselves a spot in finals with a 95-point performance in the week two semi-finals. These two played only seven out of ten matches but grabbed two Victory Royales and 51 eliminations overall. This duo took third in finals last week and is looking for a strong finish yet again tomorrow in finals. The top ten from this region will earn a chance to play in heats to conclude the FNCS next month. 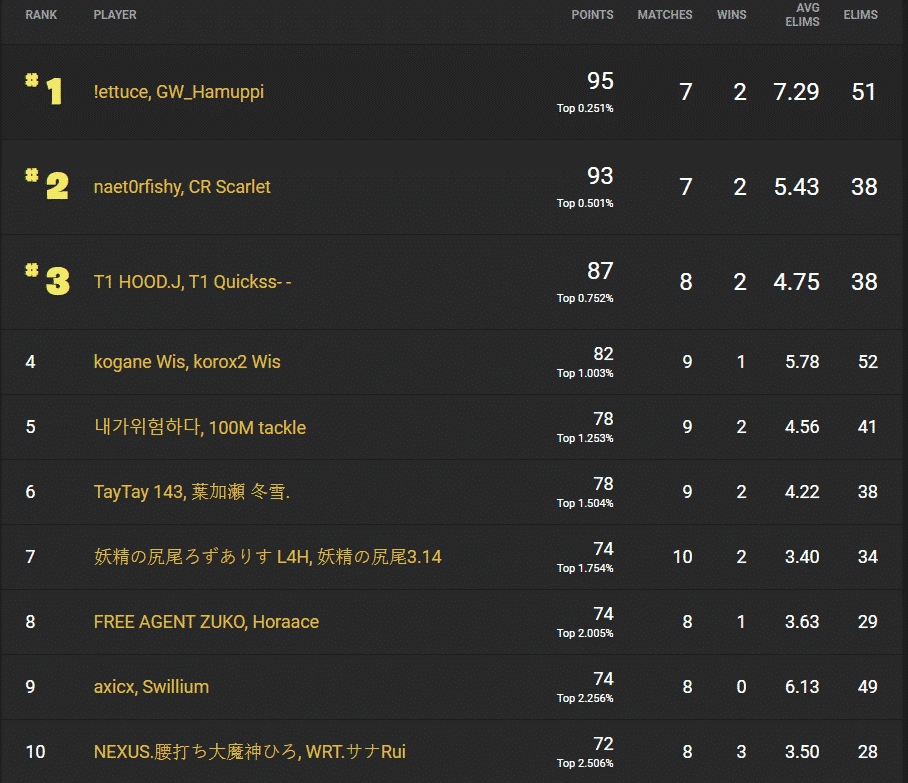 SAQR QnDx and SAQR Njby earned themselves a position in the Middle East FNCS heats and $565 USD each after an intense week two effort. This consistent duo put up 55 points over six matches and 25 total eliminations. QnDx and Njby also won half of their round three games superbly. The top ten duos below will participate in the Middle East FNCS heats. 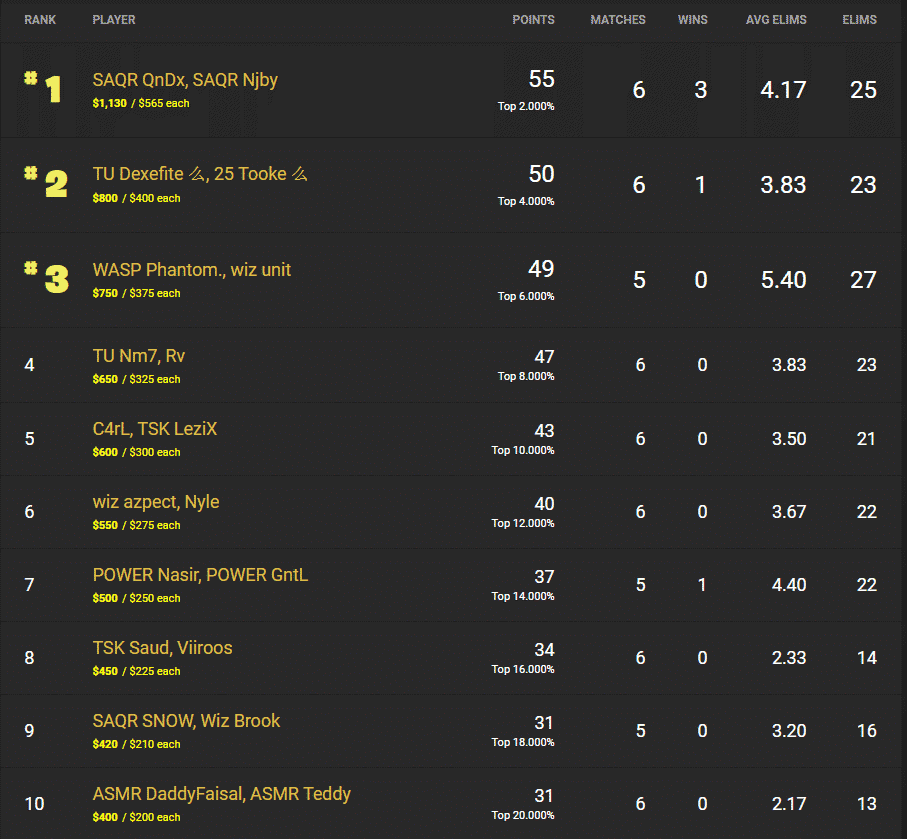 Tune in tomorrow to see who makes the final cut in all seven regions in competitive Fortnite. ESTNN has you covered with all results.