Only 100 players remain after two intense days of competition at the DreamHack Anaheim Fortnite Open. 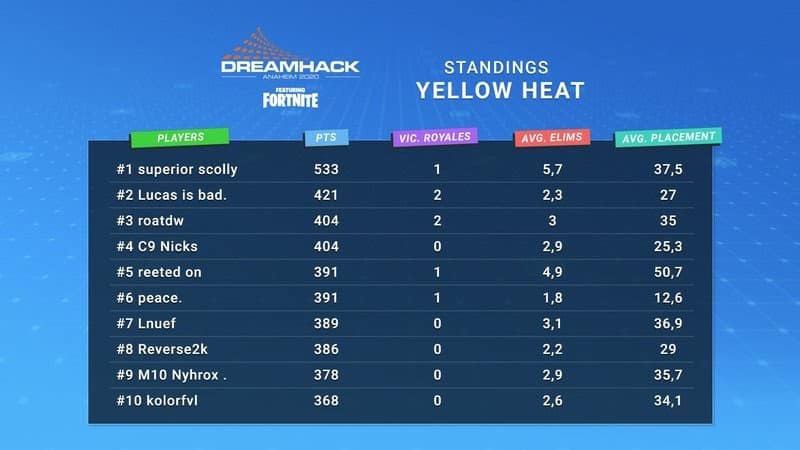 It was do or die time for the remaining players who did not qualify through the blue heat. Superior scolly of England broke the DreamHack Fortnite point record with 533. Some other notable names inside the top ten included C9 Nicks of Brazil, Reverse2k and Duo World Cup Champion, nyhrox. These players clutched up when it mattered most, but still had one more grueling round to get through. Along with 190 others, the top ten shown above made it through to the semifinals. Grand finals saw 400 of the best Fortnite players across several regions narrow themselves down to 100. 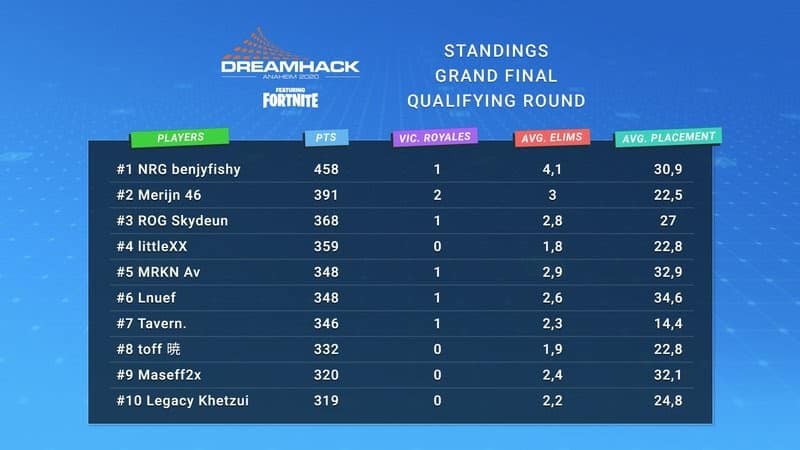 Benjyfishy of NRG stole the show in the semifinals. He started slow, but rallied back over the ensuing games and put up 458 points. Benjy managed one Victory Royale and mixed placement with eliminations to reach the number one spot. Tomorrow is Benjy’s opportunity to earn his first major LAN victory in Fortnite.

DreamHack Winter Champion, Merijn, rallied back in both the yellow heat and the semifinals. He finished slightly below benjyfishy in points but achieved two Victory Royales. Merijn journeyed from the Netherlands and will be looking to repeat as back-to-back DreamHack Fortnite Champion.

Toff, littleXX and Tavern all represented the NA West region and found themselves in the top ten of the semi-finals. MRKN Av and Maseff2x, both of NA East, finished in fifth and ninth, respectively. These ten players, along with 90 others, will compete for $250K USD tomorrow in the grand finals. Here are some other players who finished inside the top 100 and will compete in the finals.

Overall it was a tough semi-final for those who could not make the top 100. Notable names like Clix, MackWood, Calculator, Saf, Elevate, Bucke, Nyhrox and Dubs are just a few of the 300 semifinalists that are packing their bags and heading home. Many of these players missed qualification by only a few points and won’t have the opportunity to compete for the $30K USD grand prize.

What to Expect on Day Three

Fortnite tournaments often produce unforeseen results due to the randomness within the game. Competitors often can’t catch a break, and many players will suffer this same fate in the Grand Finals. The top names to keep an eye out for are former teammates and duo partners, MrSavage and Benjyfishy. These two European’s journeyed from their respective countries to not only compete but win DreamHack Anaheim.

We cannot, however, overlook the amount of talent in the top 100. In reality, all of these players possess the ability to win as long as they execute their game plan and remain focused. Fortnite can often cripple players mentally if each match does not play out as intended. It’s almost impossible to predict a winner, but we can be sure that someone will make history when the final leaderboard populates on day three of DreamHack Anaheim.