Ian “Enable” Wyatt has made an official return to the starting roster of the Seattle Surge. His poor performance at both Minnesota and London was what initially sent him to the bench. Enable even admitted on the Codcast with Anthony “NAMELESS” Wheeler and Jonathan “Pacman” Tucker that he wasn’t giving 100% in scrims. However, fans believed that he wasn’t given enough time to improve after two events.

Casey “Pandur” Romano originally moved up from substitute to take Enable’s place as a flex. Pandur played the last three events with the Surge, but the team continued to struggle. In the last several events that Seattle has attended, they have only managed to beat one team – the Los Angeles Guerrillas. They have defeated the Guerrillas a total of four times, which has earned them forty Call of Duty League points. Since the Surge has only beaten one team, yet another change was needed.

After nearly four months on the bench, Enable finally made an announcement on Twitter. He posted a picture of a statement from his management that simply said: “I’m back.” On March 18, 1995, Michael Jordan made an announcement in a similar fashion when he announced his return to basketball. While Enable had the ability to share his return through Twitter, Jordan only had a fax machine at his disposal. Even so, Enable couldn’t have made a better announcement for his return to Call of Duty then by copying the king himself. 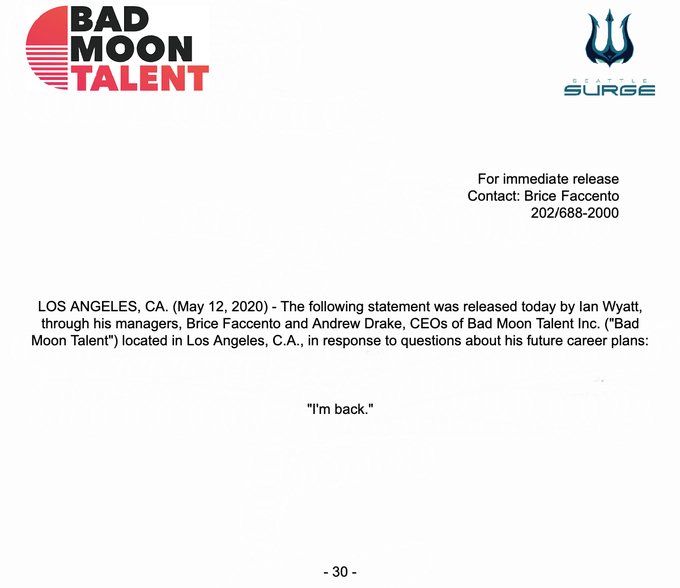 Enable will return just in time for the Seattle home series, which takes place May 22-24. After only finishing in top 3-4 at the last event in Chicago, the Surge hopes to bounce back in a big way. London Royal Ravens, New York Subliners, and Los Angeles Guerrillas accompany the Surge in Group A. While New York has made an impressive turnaround in the last two events, Los Angeles and London have fallen flat. This is Seattle’s chance to make their first finals appearance. What better time to do it than at their own home series?

Disclaimer: The Seattle Surge is owned and operated in part by Enthusiast Gaming, the parent company of Daily Esports.