Riot Games has given players their first look at the mobile version of its flagship MOBA, League of Legends: Wild Rift. As part of the Summer Game Fest, Riot Games released an in-depth video detailing the work that developers have gone through to ensure that the game feels as much like the PC version as possible. While the game will launch with a limited roster and only in two regions, it is an impressive look into the alpha build of Wild Rift.

In the video, executive producer Michael “Riot Paladin” Chow reveals the details of the alpha release. League of Legends: Wild Rift will begin alpha testing with randomly selected players who pre-registered during the 10-year anniversary in Brazil and the Philippines. Riot Games will take the feedback it receives from this time before opening the alpha up to more regions. Specifically, Chow is looking for feedback on how the dual-stick controls feel and how to optimize the user experience. 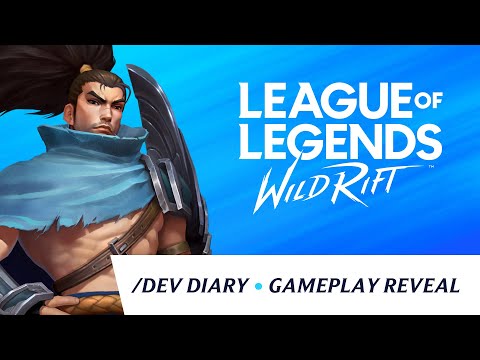 One of the immediate things players will note from the video is a lot of the information that League players rely on isn’t as readily available. Champion stats, timer, minion kills, and more are no longer displayed. Instead, skills and abilities, as well as certain items, appear on the bottom left corner of the screen. It does make sense given the much smaller screen size mobile gamers will play on. Notably absent too is the mini-map from the player’s screen, unless they are back at their nexus.

Wild Rift will launch with one initial map, also called Wild Rift. It looks a lot like Summoner’s Rift, with some changes. The biggest change seems to be that the Nexus will not have turrets protecting them. Players can also only have one active item at a time, which is a major change from the PC version of the game.

The Champions of Wild Rift

When the alpha build launches, it will come with a limited roster. David “Papa Smoothie” Xu detailed the champions coming to Wild Rift and how Riot is working to make them feel like the champion from the PC version of the game.

“We want to maintain the feel of your favorite champions so they are authentic to what you know from League,” said Xu. “We only look for changes where it makes sense, like to accommodate Wild Rift‘s faster game pacing, our slightly smaller map, or to adjust for the dual-stick controls.”

Certain champions will receive minor adjustments in Wild Rift to make them feel just as powerful as their PC counterparts. Nasus’ Siphoning Strike scales faster, making him gain stacks faster. Twisted Fate’s Stack Deck gets additional attack speed thanks to his passive now. Meanwhile, Riot will change Miss Fortune’s Double Up to a skill shot ability. Shyvana gains unique abilities in her dragon form depending on which dragon she has killed.

Riot wrapped up the video with product lead Christina Wun discussing how Wild Rift will handle champion skins and other cosmetics. Wild Rift will handle purchasing champions similar to League of Legends. Players can earn in-game currency and purchase new champions. They need not worry about certain champions being locked behind a paywall.

League of Legends: Wild Rift will be available for select players in Brazil and the Philippines starting next week. From there, Riot Games will slowly start to roll out in more regions. However, it did not detail how that release would look. Make sure to follow Daily Esports for all your Wild Rift news, updates, and more.

Related posts:
05/29/2020 eSports Comments Off on League of Legends: Wild Rift first look and details on limited alpha release
Hot News
CS:GO port to Source 2 "not happening" according to Valve News Network owner
The Biggest Esports of H1 2020 by Total Prize Pool
Iron Man VR Tips, Tricks And Things To Know Before You Start
EVO 2020 cancelled following sexual misconduct allegations against CEO
Budget Cuts for PlayStation VR has now Been Delayed to September
Recent Posts
This website uses cookies to improve your user experience and to provide you with advertisements that are relevant to your interests. By continuing to browse the site you are agreeing to our use of cookies.Ok