PUBG MOBILE has announced that its amateur and semi-pro tournament, the PUBG MOBILE Club Open (PMCO), will feature a $600,000 (~£457,400) total prize pool for its Spring split.

Registration for the event officially opened today and will conclude on April 13th. Following PUBG MOBILE’s competitive changes, the title will no longer have country-level leagues, with 170 countries now being represented across six regions. 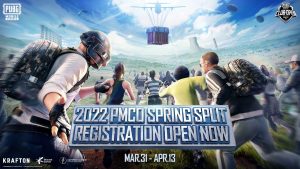 RELATED: Gillette teams up with 7Sea to launch $20,000 BGMI tournament

The six regions include North America, South America, Africa, the Middle East, Asia and Europe, with the prize pool split across each league.

Due to the competition’s shift to amateur and semi-pro teams, the PMCO will no longer grant promotion directly to PUBG MOBILE Pro Leagues. Teams will not compete through PUBG MOBILE National Championship or PMNC Regional Cups in order to reach PMPL in 2023.

Despite registration for the competitions being officially open, PUBG Mobile has yet to reveal when the 2022 PMCO Spring season will officially commence.

In an interview with Esports Insider last year, PUBG Mobile’s Director James Yang highlighted that in 2022 the mobile esports title would put a greater emphasis on its regional leagues.

The announcement by PUBG MOBILE follows on from the title securing a partnership with Sony Xperia earlier this month for its global events.

Esports Insider says: Given PUBG MOBILE’s announcement that it would transition the PMCO to focus on amateur and semi-pro teams, there was a concern as to how much attention the leagues would get. This has somewhat quelled those doubts with the season featuring an impressive $600,000 total prize pool. This is the first step in PUB MOBILE’s new esports ecosystem, so it’ll be interesting to see what the turnout is like and whether the system can help develop promising talent.