Riot Games, the massive studio responsible for League of Legends, Teamfight Tactics, and Legends of Runeterra, has kept information about its new “Project A” FPS title secret in the months after its announcement on the League of Legends 10th anniversary celebration stream along with a slew of other games. However, a series of leaks have revealed a wealth of information about the studio’s ambitious new FPS project, which is allegedly now called Valorant.

Project A is named Valorant?

Everything revolving around ‘Project A’ has referred to it as “Code name: Project A”

Riot Games has recently registered a trademark for the name ‘VALORANT’

Could this be the official name of Project A? 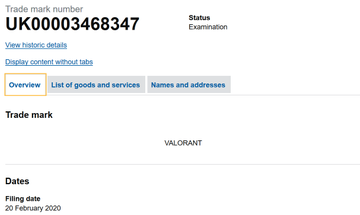 A fan Twitter account, @ProjectAOnline, connected the dots based on a recent Riot Games trademark and a dormant “PlayValorant” Twitter account that Valorant could be the official name for Project A, after the discovery of a dormant twitter account named “PlayValorant.” This name could reference Valoran, the northern continent in League of Legends‘ fictional world of Runeterra.

Most parts of this #ProjectA screenshot have been shared on various pages, here is the the full image in the highest resolution we could find!
L: Three character names [Brimstone; Sage; Viper], type [support; defense; offense?]
B: Chat and avatars
R: Sage‘s ability descriptions

Another fan account, @ValorantTheGame, released an alleged in-game screenshot that appears to be a character selection pregame lobby like in Overwatch. Team composition is displayed on the left, the player’s selected character and their abilities on the center and right, and a chatbox with social features on the bottom. The selected character is named Sage, while two other characters locked in on the left side bear the names “Brimstone” and “Viper.” More unidentified characters are visible as available for selection in the center bottom of the user interface.

Sage’s four displayed abilities, Barrier Orb, Slow Orb, Healing Orb and Ressurection, seem to indicate she is a support character. Given the character model and ability descriptions, eagle-eyed fans believe that Sage’s gameplay was already seen in Project A’s announcement trailer back in October of 2019. The Project A trailer shows famous CSGO professional player Volcano, one of the designers of Valorant, piloting Sage. Volcano watches an ally, playing the unknown masked character, die in a gunfight. He then summons a wall to provide temporary cover and buy time to revive her dead teammate before the Barrier Orb wall’s center breaks, and he kills an enemy on the other side with a semi-automatic.

The same Project A announcement trailer also reveals what we can expect from the leaked character, Viper. The character profile art for Viper, a woman with sheer black hair and a green face cover reminiscent of a surgical mask, matches the art displayed in the kill feed of a gameplay excerpt from the trailer. In the clip, Viper summons a wall of green smoke before throwing a grenade that deploys an opaque wall of what appears to be poisonous gas. In this clip, Viper is wielding a pump-action shotgun.

As we move further into 2020, more Valorant / Project A news is sure to follow. Stay tuned to Daily Esports for all the latest developments.