French esports organisation Team Vitality has teamed up with global sportswear brand adidas for the League of Legends Open Tour 2022.

As part of the deal, Team Vitality will launch a semi-pro team called Yellow Stripes to compete in the tournament. Yellow Stripes will benefit from both companies’ performance infrastructure, moreover, adidas will provide a professional mentor for the team and design its jersey. 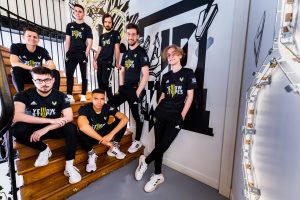 Yellow Stripes marks the latest collaboration from Team Vitality and adidas. Since first teaming up in 2017, the two entities have collaborated on an esports sneaker, the VIT.01 and the organisation’s esports jersey.

Fabien ‘Neo’ Devide, Co-Founder and Esports Director at Team Vitality, commented: “This project is a unique opportunity for these young players to learn and grow into what we hope will be a great sporting career in the future.

“They have challenges ahead of them, but we have every ambition to get them to the final of the Open Tour. We’re delighted to have a partner in adidas who is not just interested in having their brand represented on the biggest stages in esports, but are committed to helping develop and support the pros of tomorrow.”

Yellow Stripes will be coached by Benjamin ‘Fara’ Stoffel, meanwhile, LoL caster and content creator Martin ‘Krok’ Berthelot will act as team manager. The team will also have full access to Team Vitality’s performance facilities including V.Hive and V.Performance in the Stade de France and the Berlin coaching house.

Additionally, to capture the progress of Yellow Stripes, both brands will collaborate on an eight-episode documentary series following the team’s progress in the Open Tour.

Sylvain Bouches, VP Director Brand for adidas France, added: “True to our belief that through sport we have the power to change lives, we are very proud to participate to this programme.

“adidas supports all athletes who want to make a difference in the way they play, regardless of their sports. Launching ‘Yellow Stripes’ initiative with Team Vitality is rooted in our brand DNA and in the way we want to challenge sports industry codes.”

Esports Insider says: adidas seems committed to further increasing its presence in esports and has chosen a trusted partner to do so. Alongside the sportswear brand, Team Vitality has decided to create its semi-pro team Yellow Stripes to nourish ‘the pros of tomorrow’, providing them with immense mental and practical support.