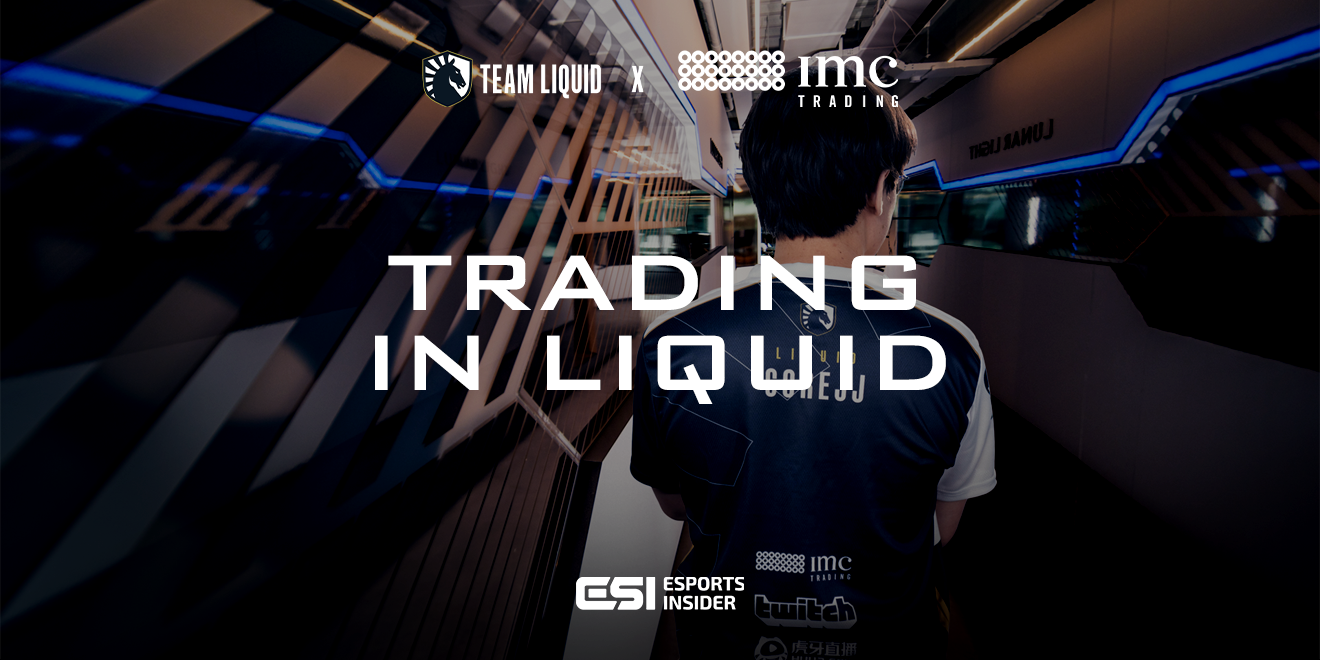 From his top floor office in the former Dutch ING Bank headquarters, Steven Biester was strategising, as he often did. The Global Head of Marketing & Communication at IMC Trading was trying to make sense of the company’s latest employee survey results — over 90 percent of new hires had listed gaming as a personal hobby.

Biester didn’t find this a cause for concern, but rather identified an opportunity. If such an overwhelming majority of successful recruits were tapped into gaming, could that mean that gamers make good traders? And if their current traders were also into gaming, could the firm somehow get involved in gaming, investing where their employees were already personally invested?

Biester peered out from the Infinity Building, overlooking Amsterdam’s Zuidas business district. What could a world-class, global, electronic market maker contribute to the gaming space that would be received as meaningful? Biester already knew how unforgiving gamers-as-an-audience could be — he’d seen the reports.

In a meeting later with the firm’s media agency, Biester mentioned IMC was looking into esports sponsorships. The agency’s SEO specialist mentioned he went to college with ‘a guy who now works for Team Liquid’.

That ‘guy’ was Marcel Schakenraad, Partnership Manager at Team Liquid. For those keeping score, Schakenraad was also the connector between Team Liquid and architecture firm AHH, which designed the Team Liquid Alienware Training Facility in Utrecht. They booked a meeting.

Before even sitting down, the two companies already shared a lot on paper. Both have deep Dutch roots, operate at a global scale, and are driven to be at the forefront of individual performance — plus, both are passionate about delivering on their values of giving back and working to improve society.

“Before we knew it, we had a contract on the table in a month-and-a-half or two months,” Schakenraad told Esports Insider.

In February this year, Team Liquid publicly announced a partnership with the market maker.  IMC’s logo found its place on jerseys across all of Team Liquid’s rosters and the same jerseys found their way into the wardrobes of each IMC employee. Each new employee gets a full Team Liquid kit: mousepad, apparel, mug, et cetera — by repping Team Liquid, they’re repping IMC.

The unlikely couple was cooking with gas while the ink was still drying. Team Liquid hosted an internal esports competition for IMC employees, complete with multiple titles and shoutcasters. Liquid’s Schakenraad recalled, “we gave them basically an entire esports experience. They loved it.”

But the goal of the agreement wasn’t to make esports fans of IMC employees, nor was it to piggyback the firm into the space to more ‘authentically’ market to its desirable target audience and their disposable incomes. IMC’s Biester and the team saw further potential for the audience: the skills and competencies that earn their livings. Not everyone goes on to be a pro gamer, some go on to be programmers. IMC wants more to go on to be market makers.

According to IMC’s website: “A market maker stands ready to buy or sell financial products at any time, facilitating the transfer of risk for market participants.” The explainer video on the firm’s YouTube channel helps explain the concept. It’s worth the two minutes.

Simply put, market makers buy (bid) and sell (ask) securities, guiding the flow — or liquidity — of the financial markets they operate within. Complex algorithms organise incredible amounts of information displayed on the quad-screen setups seen on trading room floors. Disciplined traders make split-second decisions to capitalise on shifts in the market, attempting to make profits on the difference between the price they paid for the securities and the price they sell it for, or the bid-ask spread. That’s just scratching the surface.

Similar levels of complexity face anyone trying to spell out the strategy behind an 1000IQ esports play to a newcomer — one of the many similarities IMC sees between esports and trading.

High-level trading performance isn’t too far away from high-level esports performance. The ability to predict dynamic outcomes, the discipline to execute precise inputs, and following a strategy under pressure demands similar skill sets. It’s not just market makers or esports orgs that are after these skill sets. Dozens of other industries are also competing for highly-skilled technical workers all over the world.

In May, IMC College Clash engaged students and near-graduates in global Team Fight Tactics and League of Legends tournaments hosted by Team Liquid. After the tournament, IMC saw an influx in applications for its global internships and graduate traineeships. The partnership was already paying off. 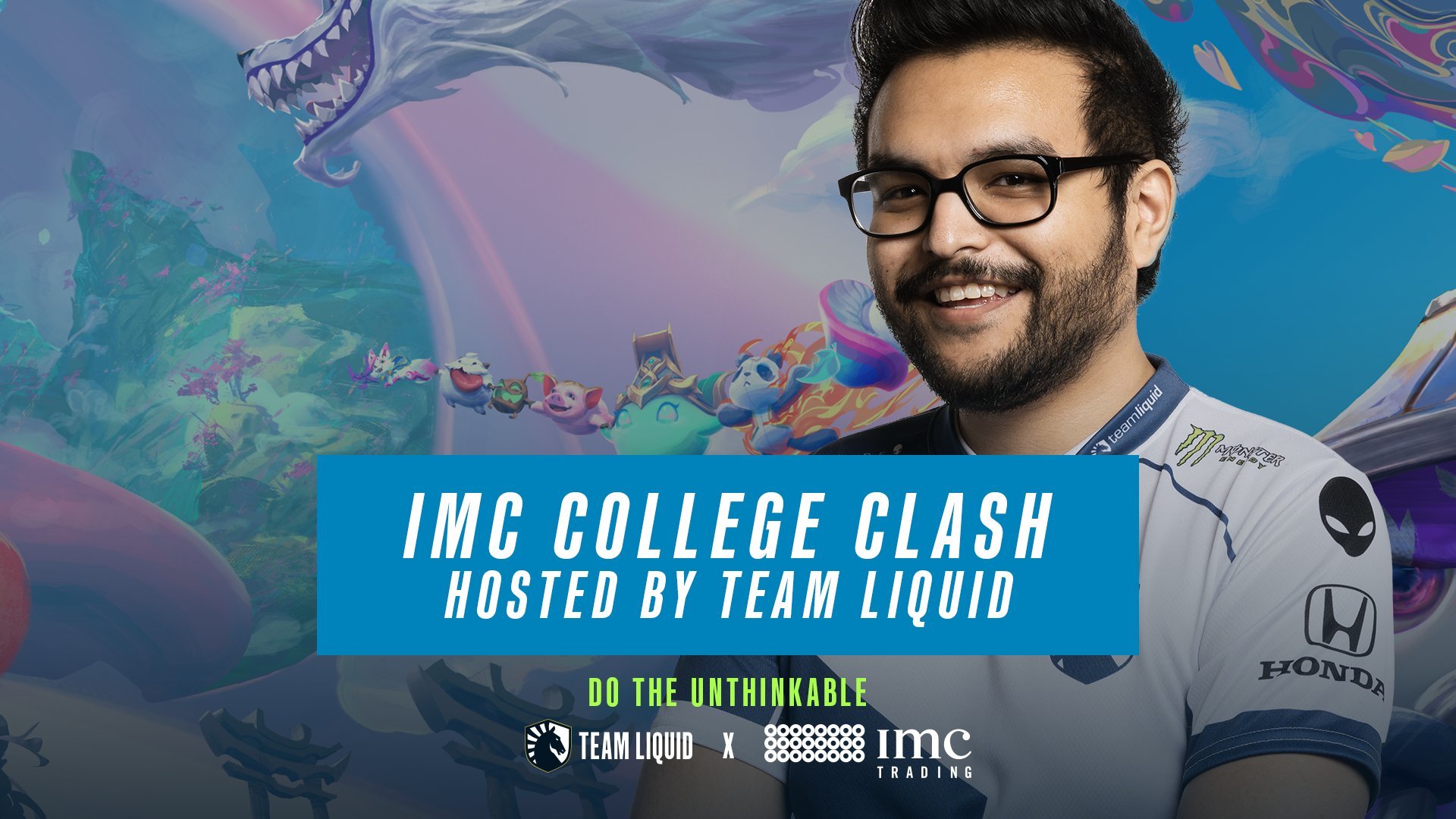 In June, IMC joined PrideMakers 2021, bringing the LGBTQIA+ community and allies together to ‘collaborate on projects that promote diversity, equity, and inclusivity in the esports and gaming industry’, according to the event page. IMC contributed prizes, experienced judges, and expertise from previous hackathons.

During September’s Trading and Gaming for Charity event, Team Liquid talents such as Slysssa, AverageJonas and Harstem hosted a 24-hour charity stream-a-thon while IMC  committed to donate all profits from its day of trading across three continents. The streamers collectively raised about $8,500. IMC closed the day at around $4 million. All of it went to non-profit organisation Room to Read.

The two teamed up this month for Liquid Hacks 2.0, a follow-up of Team Liquid’s 2020 debut hackathon. By partnering with Team Liquid on these events, while not strictly esports related, IMC’s been able to reach their target audience nonetheless. “That is why we are committed to doubling down on our efforts in the years to come,” Biester said.

IMC didn’t need a disclaimer as to how fast the esports industry moves. To trade at the highest speeds possible, IMC’s technologists are constantly developing innovations for connectivity to trade at almost no latency. If things go according to plan, Biester and Schakenraad hinted, esports might just get a taste of the firm’s innovations.

Friday drinks and a ping-pong table in the workplace are hardly ‘perks’ anymore — especially since the workplace has become an increasingly out-of-office concept. To convince cream-of-the-crop talent to don company colours, IMC is seeking to give its people what it knows they want through its authentic and value-based partnership with Team Liquid.

Both the trading firm and the esports org are passionate about enabling their people to do the unthinkable with the very nature of the collaboration. Trust in their people, their technology, and their vision has promised to bind the two together for years to come and what the two have managed to accomplish under the current conditions is likely just a taste of what’s in store.

“We can’t predict the future for these kinds of partnerships,” Biester said, “and it’s still very early days, but we’re already beginning to see an influx of applications referencing our partnership. Which is the main goal for us — to source and hire bright, talented gamers.”