According to the release, the collaboration will see Tribe Gaming produce a range of content featuring Ford vehicles. This includes an episodic series featuring the organisation’s content creators. 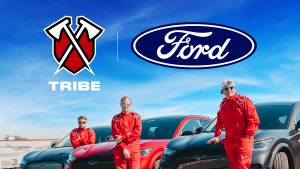 Ford’s logo will also be integrated into Tribe Gaming’s competitive jerseys, as well as on the organisation’s content. Moreover, the manufacturer will provide Tribe Gaming with branded Ford vehicles for its mobile esports players and content creators.

Patrick Carney, Tribe Gaming’s Founder and CEO, commented: “Joining forces with Ford can’t be understated – it’s one of the biggest moments in the history of Tribe Gaming.

“Ford has been in the driver’s seat of automotive innovation for over 100 years. As we look to drive forward the future of mobile at Tribe, they’re a dream partner for pushing limits on one of the fastest growing platforms in gaming.”

In addition, the collaboration will also see a new ‘Plugged In’ series on the organisation’s social platforms. The activation is said to feature behind-the-scenes communications from Tribe Gaming’s esports teams.

Suzy Deering, the Chief Marketing Officer of Ford, added: “The excitement so many have for gaming is apparent and contagious, and as we reach out these younger, passionate gamers, Tribe’s dynamic and fun content can help bring the Ford brand to life for this new audience.

“Tribe is the perfect sponsor to help introduce Ford to their millions of 18–35-year-old followers, showing them how we can meet their needs, both on the road and off the field.”

Esports Insider says: Ford’s push into the esports industry continues by partnering with the mobile-focused esports organisation. Not only will this deal push the manufacturer’s brand across a different demographic, but the deal further strengthens Tribe’s commercial portfolio.