In either case, once you're a zombie, you don't usually have much in the way of a personality, to say nothing of good manners, but on occasion, the negative aspects of zombification don't quite take. This leaves someone who should, by all accounts, be dead, but maintain both their movement and sense of self. 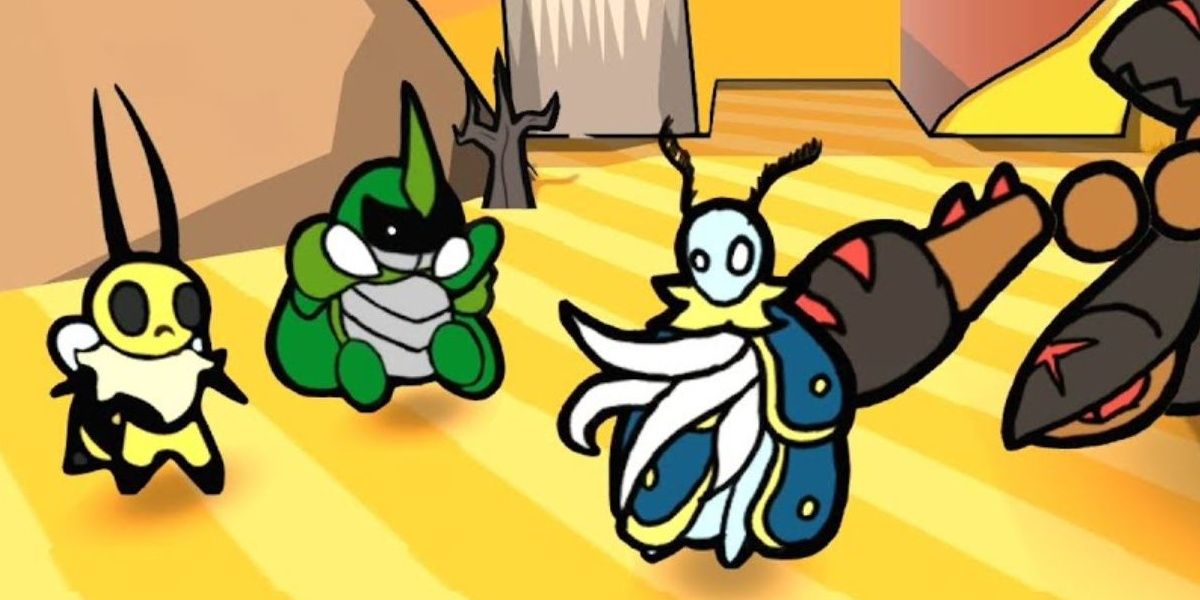 At a glance, Leif appears to be an ordinary moth, albeit one with unusual cryokinetic abilities. In actuality, though, the bug that was Leif has been dead for many years. Leif was an explorer who worked as a scout under Queen Elizant I, but when a voyage into Snakemouth Den went sideways, Leif ended up dying and forgotten in the cave's depths.

As it so happened, though, Snakemouth Den was also home to a secret roach laboratory, from which a special species of cordyceps fungi escaped, found Leif's corpse, and took it over, inheriting his memories and personality in the process. The creature we know as "Leif" is more or less just an empty husk of a moth piloted by fungi. 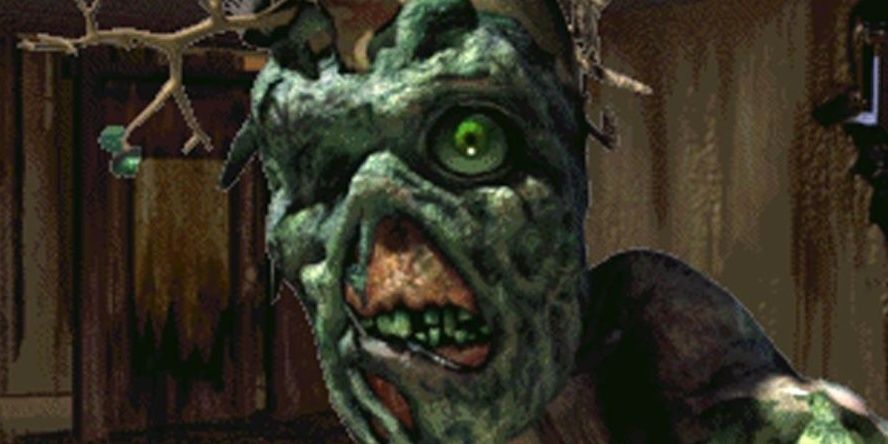 When the nukes dropped in the Fallout series' alternate history, many people weren't able to get to shelter in time, or else their shelters proved inadequate. Those who weren't immediately vaporized found themselves mutated into ghouls, humans in a near-perpetual state of decay that are healed by radiation.

While this isn't the best way to live a life, some ghouls have chosen to make the best of things, and Harold's a great example. Despite being a ghoul, and an old one at that, Harold is still a kind and jovial person, more than willing to aid any travelers who have lost their way. 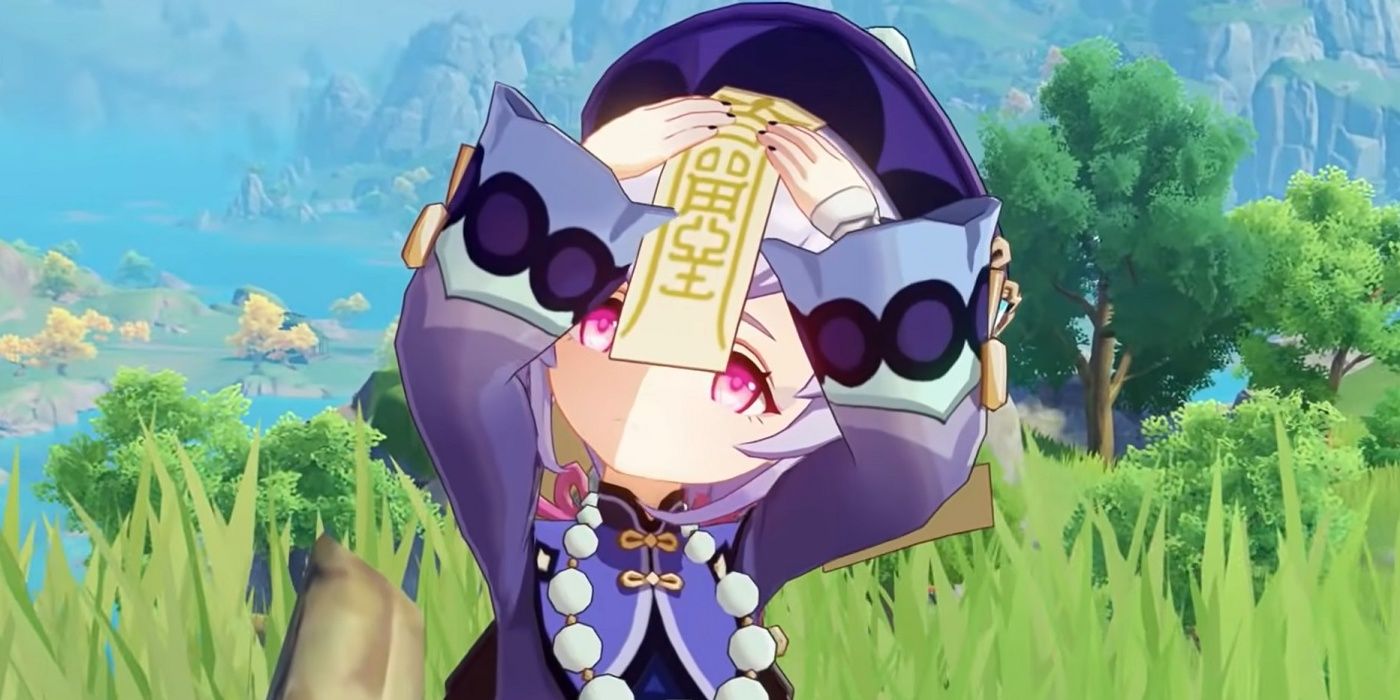 Qiqi was revived from the dead by the Adepti as a zombie but was never given any particular orders. Without a specific reason to exist, she became an apprentice at Bubu Pharmacy. Qiqi is most definitely dead but maintains an approximation of life with various tricks.

For instance, to prevent rigor mortis from setting in, she maintains a strict calisthenics routine, and to aid with her chronically foggy memory, she carries around a notebook full of reminders and memos. Qiqi cares very deeply for those she considers friends; she's just not especially good at expressing emotions due to the whole "being dead" thing. 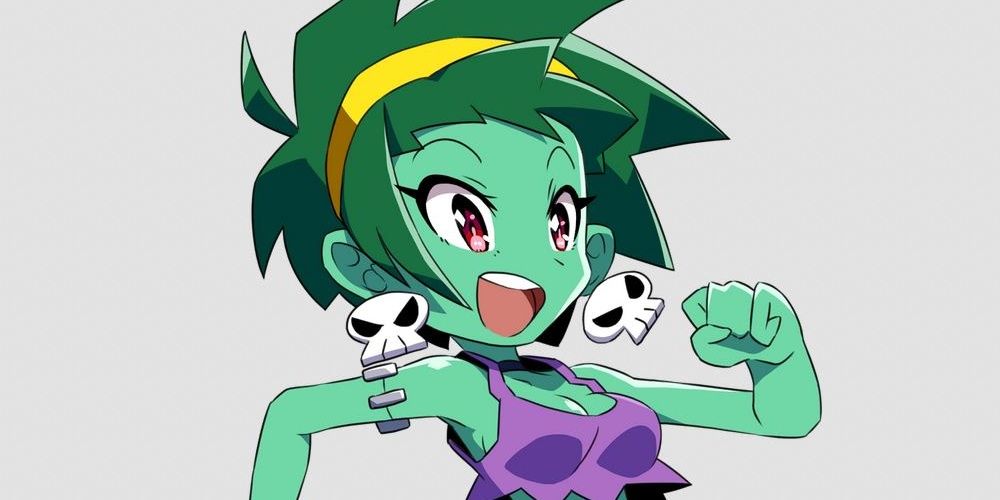 In a land as rife with magic as Sequin Land, there is unsurprisingly no shortage of zombies out and about. However, even when you're a zombie, you can maintain your sense of self fairly easily by regularly drinking strong coffee.

Rottytops is one of these self-aware zombies, and while she has a reputation as a troublemaker and a penchant for being two-faced, she is a genuinely close friend to Shantae. She has threatened to eat Shantae's brain on several occasions, but she's just joking. Probably. 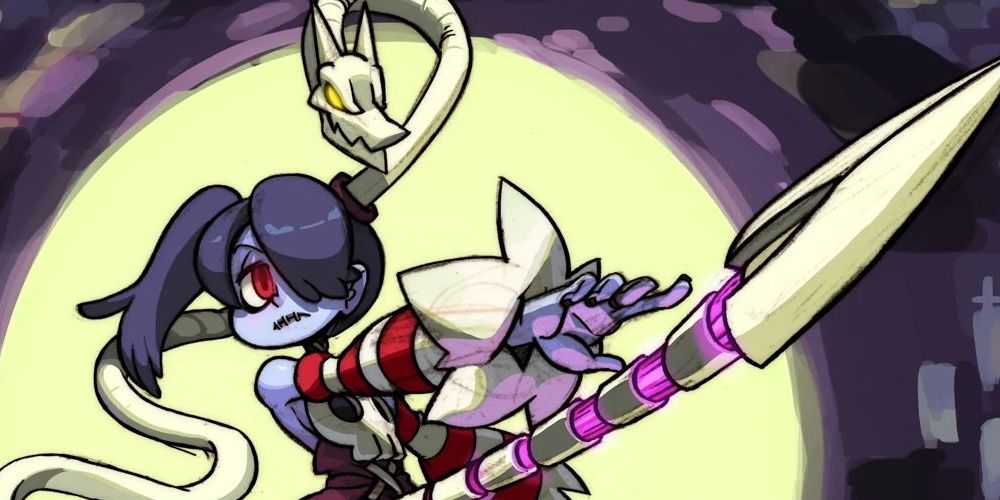 Whenever a new Skullgirl arises in the world, her incredible power automatically animates corpses within her proximity to serve as her minions. Sienna "Squigly" Contiello was one of the dead brought to life when Marie became the Skullgirl, but thanks to the presence of the Parasite Leviathan in her body, she was able to resist the Skull Heart's call and retain her sense of self.

While Squigly can't speak audibly due to her mouth being sewn shut, those who can hear her inner voice can tell she's still the same well-mannered young lady that she was in life, and Leviathan is more than happy to stay with her, alive or dead. 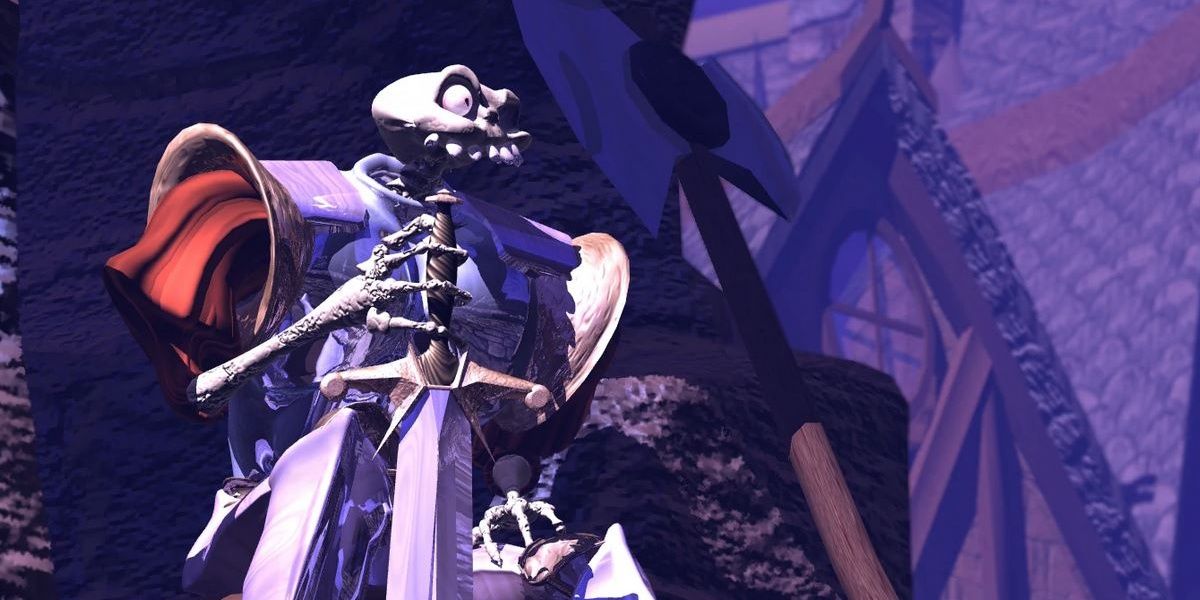 When the evil sorcerer Zarok sought to raise an undead army to conquer Gallowmere, he apparently didn't think too hard about who he was raising because one of the corpses he called up belonged to Sir Daniel Fortesque, the late captain of the king's army.

Sir Dan wasn't exactly the pinnacle of knighthood in life, being the very first causality of the conflict he died in, and becoming a corpse didn't do him any favors. Even so, the fire of chivalry still burned in his chest, and he sought to defeat Zarok and save the kingdom once and for all, both to fulfill his duty and get back to sleep.

4 Tutankhamun – Sphinx And The Cursed Mummy 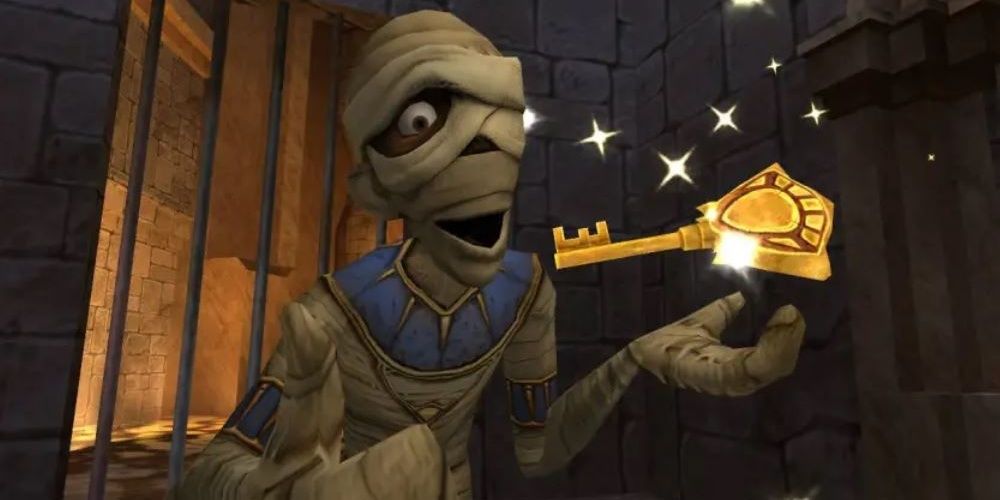 In order to conquer the world, the evil god Set impersonated Akhenaten, prince of Egypt, with the intent of assuming the throne and the absolute power that came with it. Problem is, Akhenaten was second in line to become king behind his younger brother Tutankhamun.

To get Tut out of the way, Set kidnaped him and drained away most of his life force, leaving him as nothing but a mummy barely clinging to life. Even as a gangly mummy, though, Tut was more than willing to hurl himself into danger if it would help put a stop to Set's plans and return his life to him. It definitely helped that his enchanted body was completely immune to physical harm. 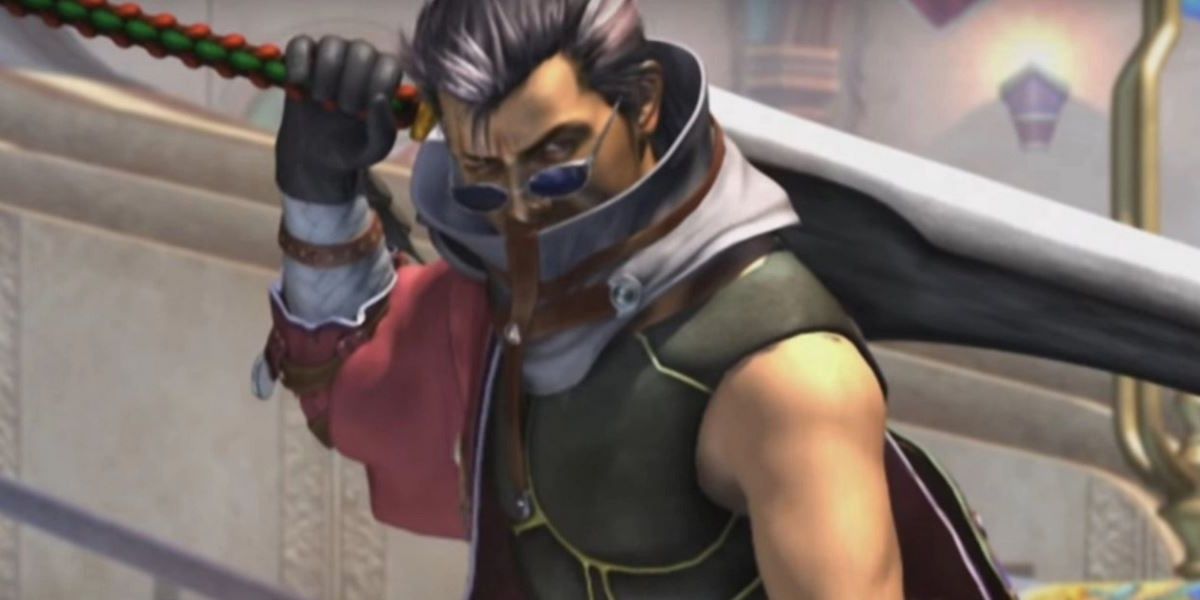 Life is a bit of a complicated concept in Spira; when someone dies, a Summoner needs to direct the pyreflies, little energy spirit things, that make up their body to a place known as the Farplane, which is kind of like a tangible afterlife. However, someone with a strong conviction can remain corporeal even after a supposed death. These people are known as Unsent, and most of them are jerks.

Auron is a rare exception, as despite being an Unsent, he isn't animated by a grudge like most of them. Rather, it's his desire to protect and aid Tidus to fulfill Jecht's last wishes that keeps him going. If you want to get technical about it, Auron is more of a ghost than a zombie, but he does have a tangible form, and he's supposed to be dead, so it's close enough. 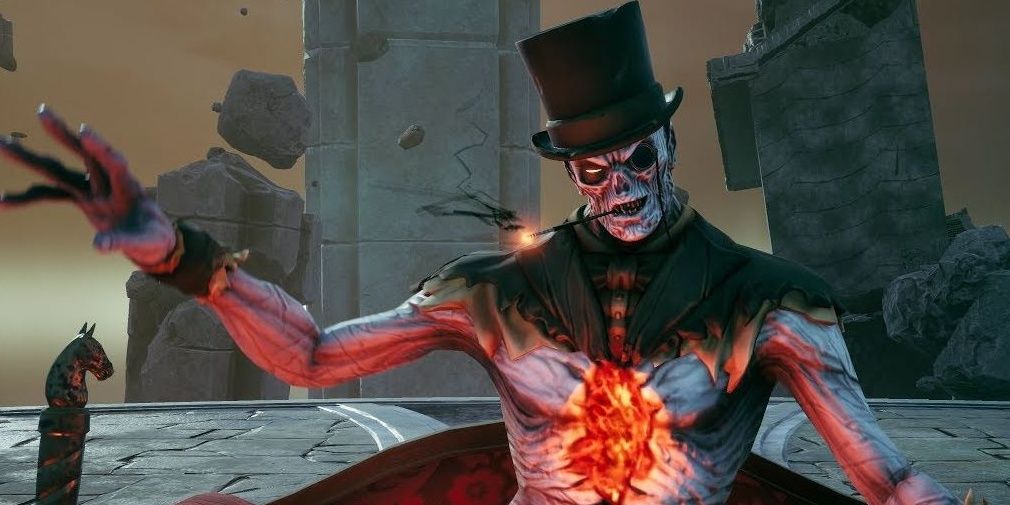 While there are proper undead in the legions of Hell, the Wicked are more similar to traditional zombies; scattered human corpses left over from the Apocalypse that have been animated by ambient demonic energy. The majority of these creatures are vicious and violent, not to mention dumb as a sack of hammers, but there is one exception: Wicked Killington, or Wicked K for short.

Despite being a Wicked, K not only maintains his sense of self but is downright gentlemanly. He's still a rather violent sort, but he'll at least greet you with a pleasant bow and a how-do-you-do before punching you in the face. 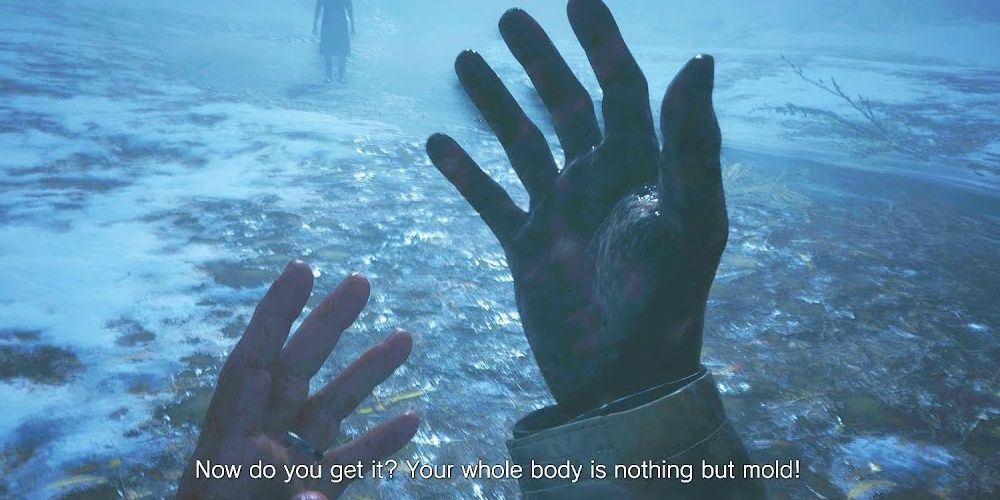 As was revealed in the climax of Resident Evil Village, when Ethan entered the Baker Estate in the previous game, he was swiftly infected with Eveline's Mold. When Jack Baker stomped his head, he should've died on the spot, but the Mold in his body swiftly absorbed his biomass and kept him going as a sort of… rough approximation of a human being.

While he's not exactly the same kind of creature as the full-on zombies of other Resident Evil games, it is a fact that Ethan definitely isn't supposed to be alive. That certainly didn't stop him from risking everything to rescue both Mia and Rose, and that makes him quite the guy.