The Last Spell is an incredible blend of Fire Emblem's turn-based strategy, resource building, and rogue-like elements and mechanics. You’re tasked with keeping a circle of mages alive a number of nights for them to perform the last spell that will drive the forces of evil back and allow humanity to continue their existence.

At night, you fight monsters, but during the day, you prepare for them, building walls and armories, equipping new gear onto your units, and recruiting new heroes to join the fray. When you are defeated, you’re given the chance to unlock permanent upgrades to help you get further in future runs. It sounds like a lot, and that’s because it is. So, then, what should you focus on when getting started in The Last Spell?

10 Clicking Is Slow, Use The Hotkeys 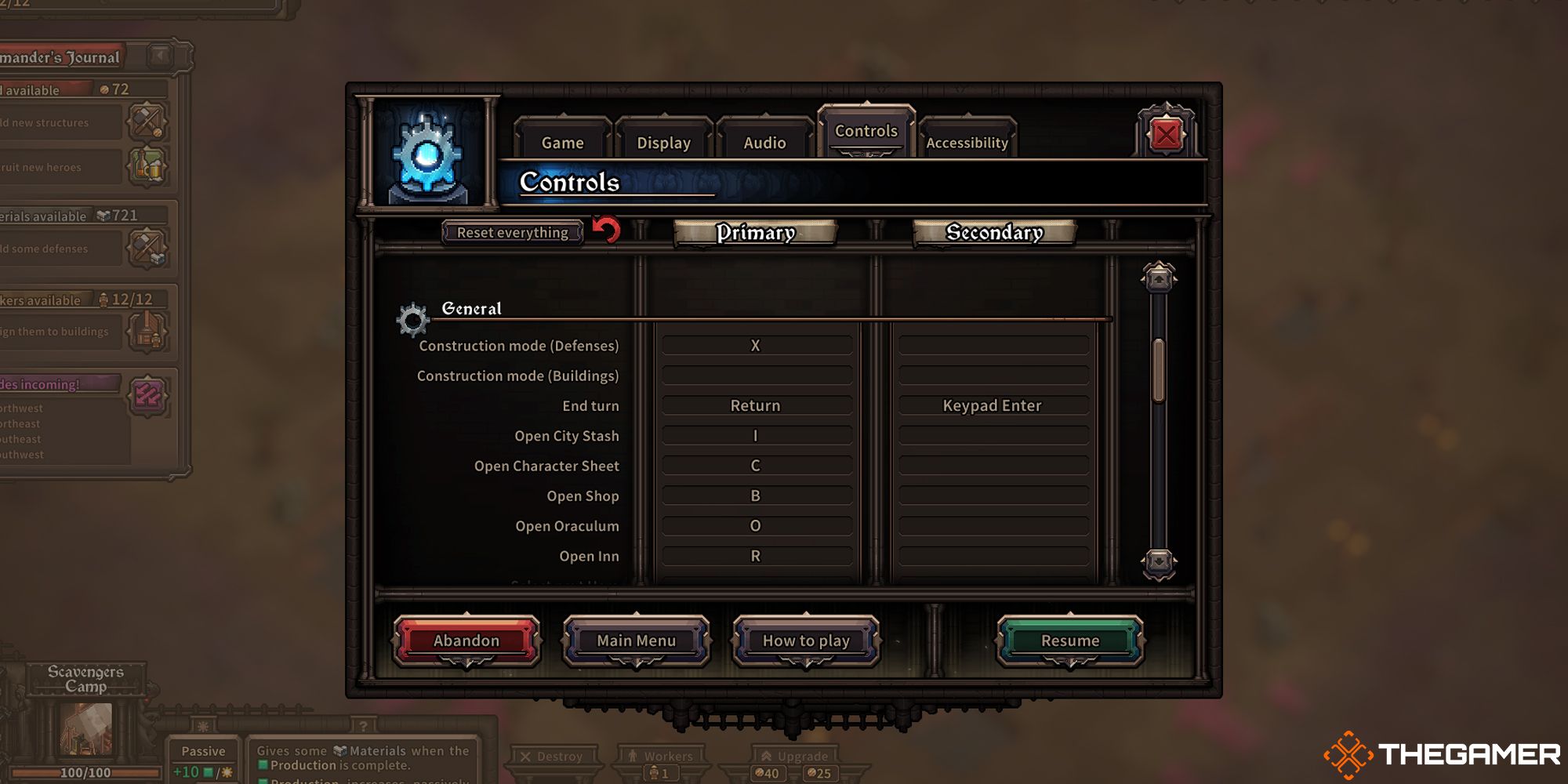 As is the case with most complex games, you can get by with clicking or otherwise only using the mouse, but your experience may be hindered. It’s much faster and easier to learn the hotkeys associated with your skills than it will be to click everywhere, especially during combat.

Your combat hotkeys are going to be the number bar, or numbers one through zero, though you won’t likely have so many skills to have it go so far. The escape key will also help you cancel any selections you may have made. Tab will swap your weapon set, and enter will end your turn. That’ll be enough to get you started.

9 You Can Undo Movement, But Only Once 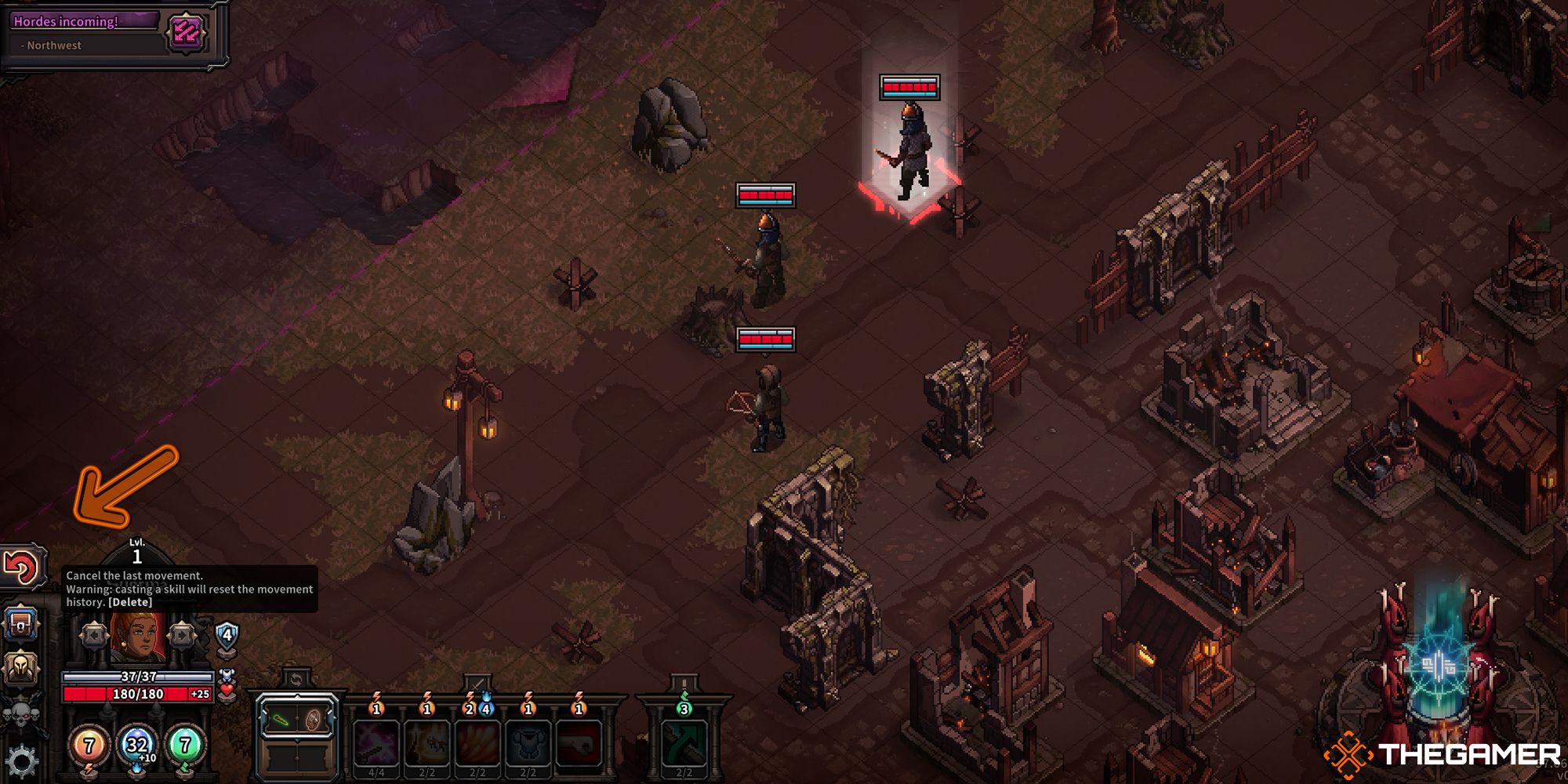 The worst part about turn-based strategy games is when you misclick or otherwise input an action that you didn’t want to or regret instantly. This is especially true with movement.

Luckily, you can undo any movement made in error, as long as you do it right away. After movement, on the left side of the screen, right above your current unit’s stats, is an undo button. Keep in mind that you can only do it once, so don’t move your unit five times before wanting a redo. Also, once you attack, that movement is locked in, so no do-overs. 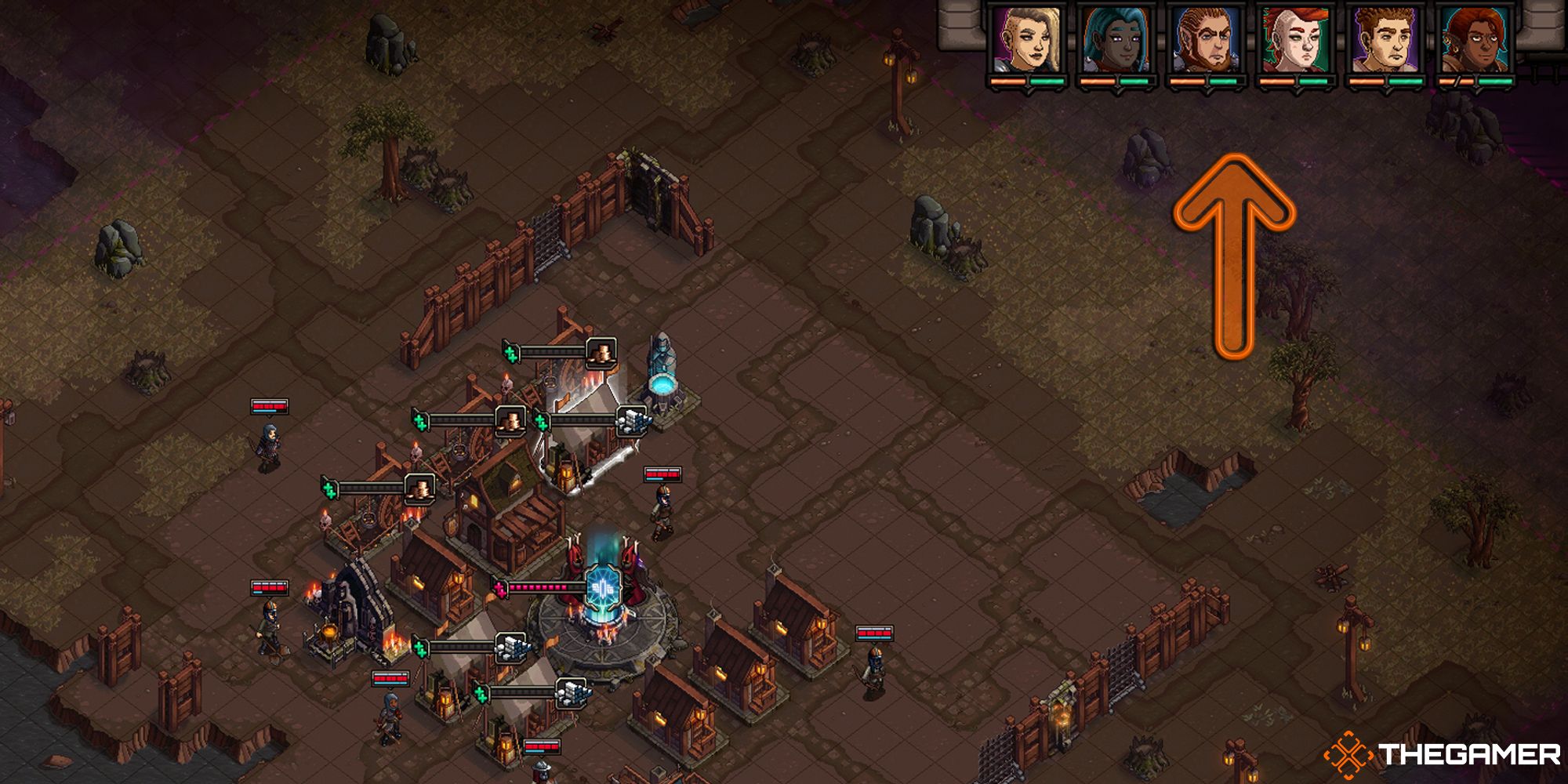 When first starting a campaign, you’ll only have two units to worry about, so losing them on the battlefield or managing their action and move points isn’t too difficult. However, later down the line, when there are 200 enemies on screen, and you’re juggling six units, things can get a little out of hand.

In the top right corner of your screen is a banner with each unit under your command. Not only do they showcase each unit’s available action points in orange and movement points in green, but you can also click on a unit’s portrait in the banner and be taken directly to them, letting you spend any last minute action points you have leftover. 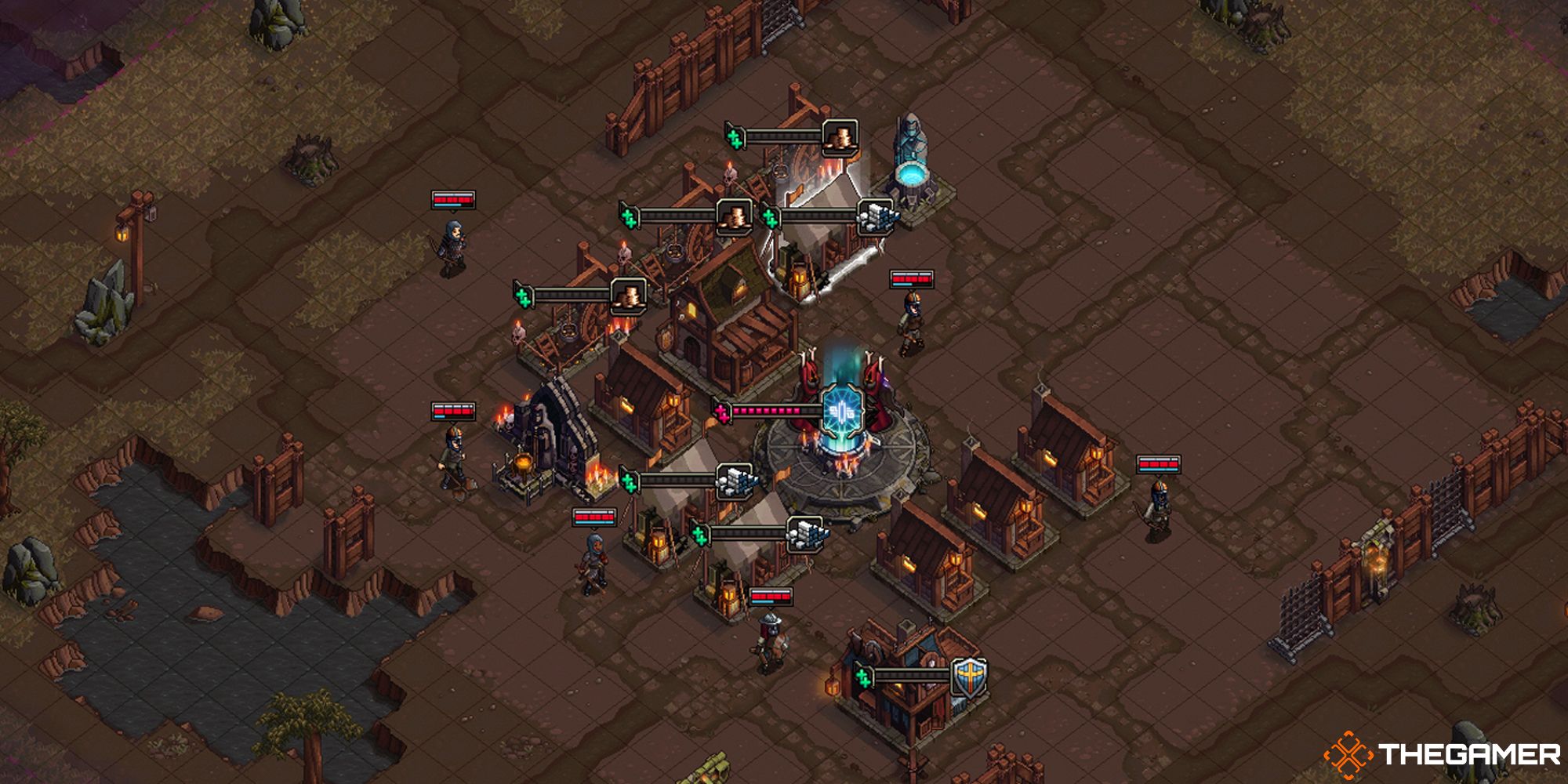 Between bouts of fighting off hordes of monsters, you’ll be building and repairing a small town to help supply your units. There are a great many options to choose from, including temples, armories, weapon crafters, and even an inn to invite new heroes to the town you can recruit.

However, what should you build first? Aside from building and upgrading your villages, which give you more workers to do more things, you should build mines for money and scavengers for building supplies. Once those are built, and upgraded a couple of times, you’ll be well on your way to a sustainable economy that’ll last you till your final night.

6 Aim For Goddess Of Light Unlocks 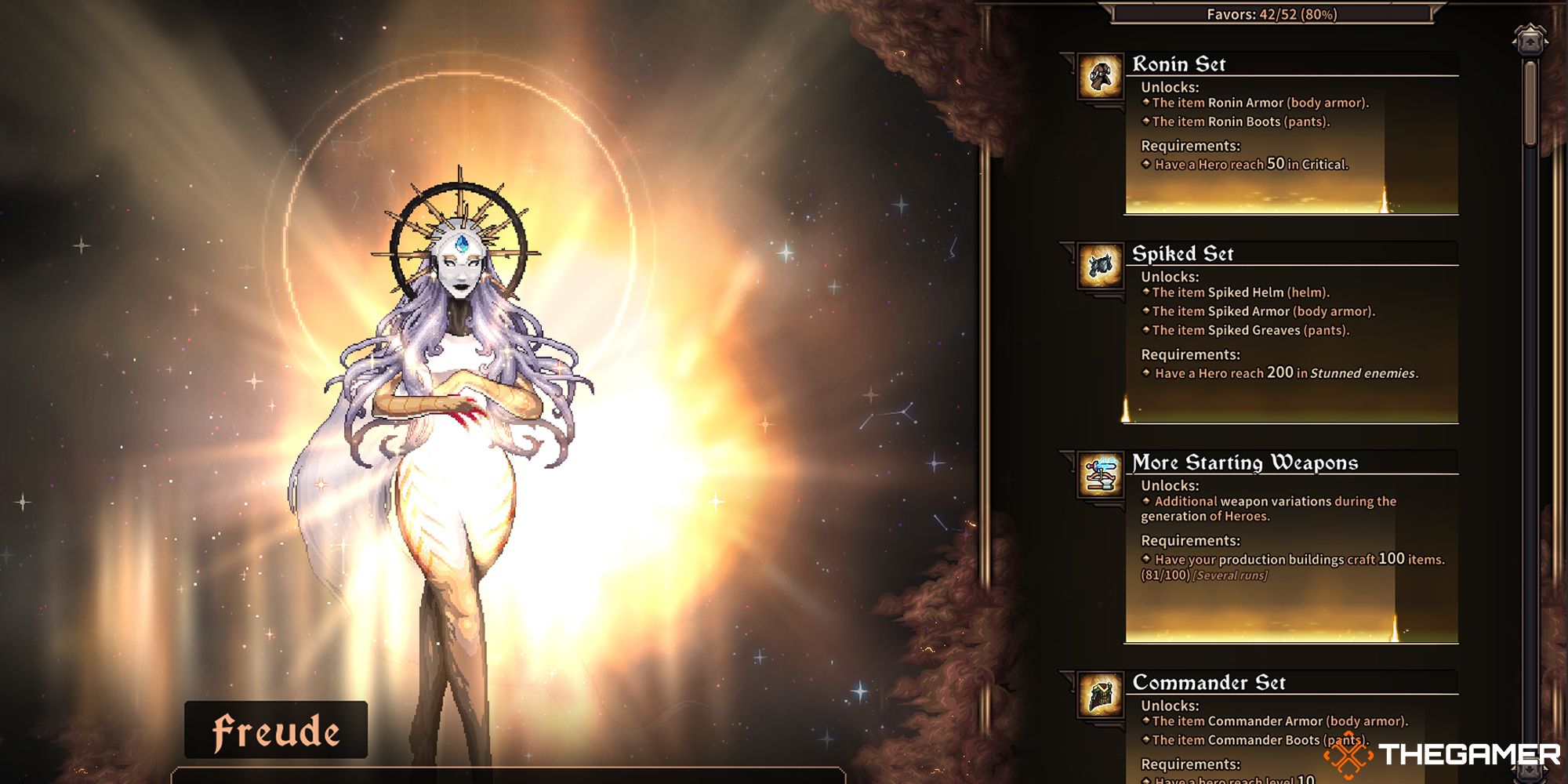 There are two rogue-like upgrade buying options in The Last Spell. Each successful night, you’ll gain tainted essence to spend on the Goddess of Darkness upgrades, but there’s another Goddess there to serve you as well.

The Goddess of Light upgrades aren’t as simple as spending tainted essence for unlocks. Each upgrade requires you to perform a mini objective while playing, such as getting one of your units to 300 health. These upgrades are incredibly useful and are fun objectives to play towards while also trying to survive until the last night. 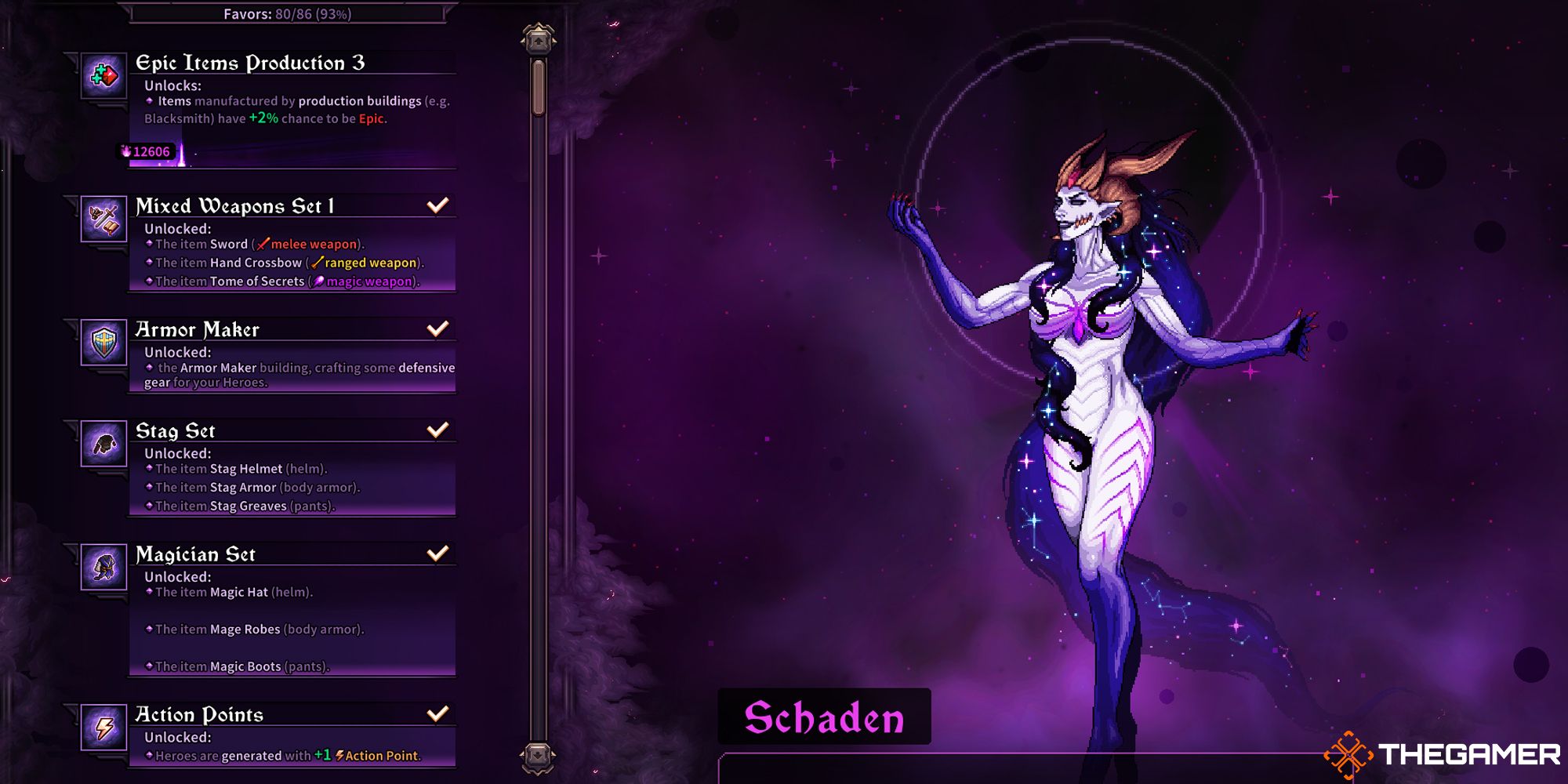 On the flip side, the Goddess of Darkness upgrades are just as useful. Spending your tainted essence on these upgrades is much simpler than performing mini objectives for the Goddess of Light, but be warned, too many upgrades don’t always bode well.

The Goddess of Darkness offers upgrades that expand your optional pool of weapons, among many other things. While it may be tempting to unlock every weapon, be warned that the increased weapon pool will make it harder to get the weapons you really like. Instead, consider finding the weapons you like to use the most, then upgrading to find better or rarer versions of those weapons, rather than a greater pool of other weapons. 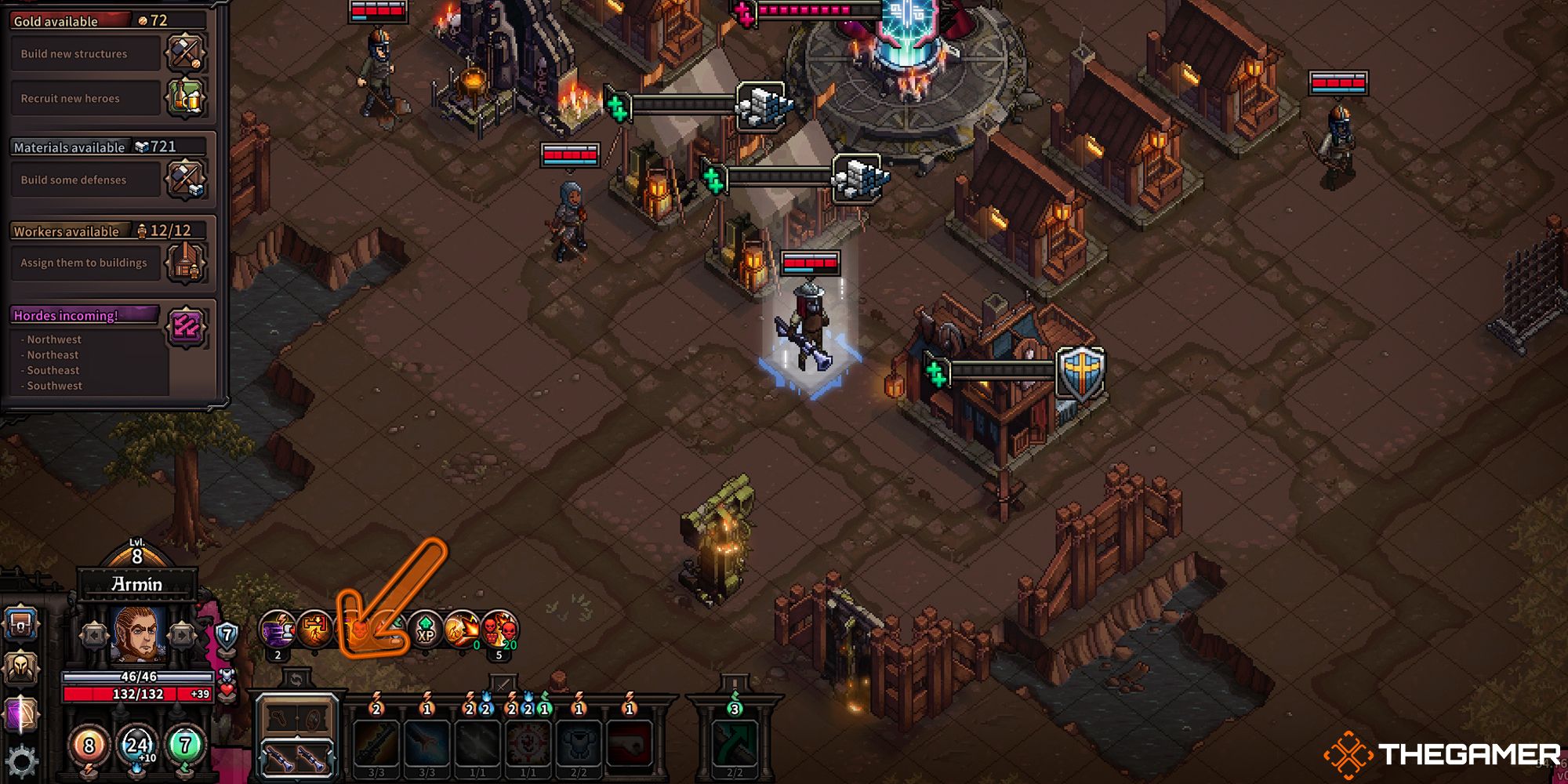 After each night, your units will usually gain enough experience to level up, especially early on. Level ups come in two sizes: increasing base stats like physical damage or crit chance and unlocking perks that provide unique bonuses, like coagulation, which gives your unit armor equal to a portion of their daily health regen.

Each unit is also able to carry two weapons. It may be tempting to make your units jack-of-all-trades by diversifying their weapons and damage types to give them a range of options, but that may not be the wisest choice. Instead, try double stacking damage types by giving units two different weapons that use the same damage, like two ranged weapons or two magical weapons. That way, you only have to upgrade one stat while still giving your units some versatility. 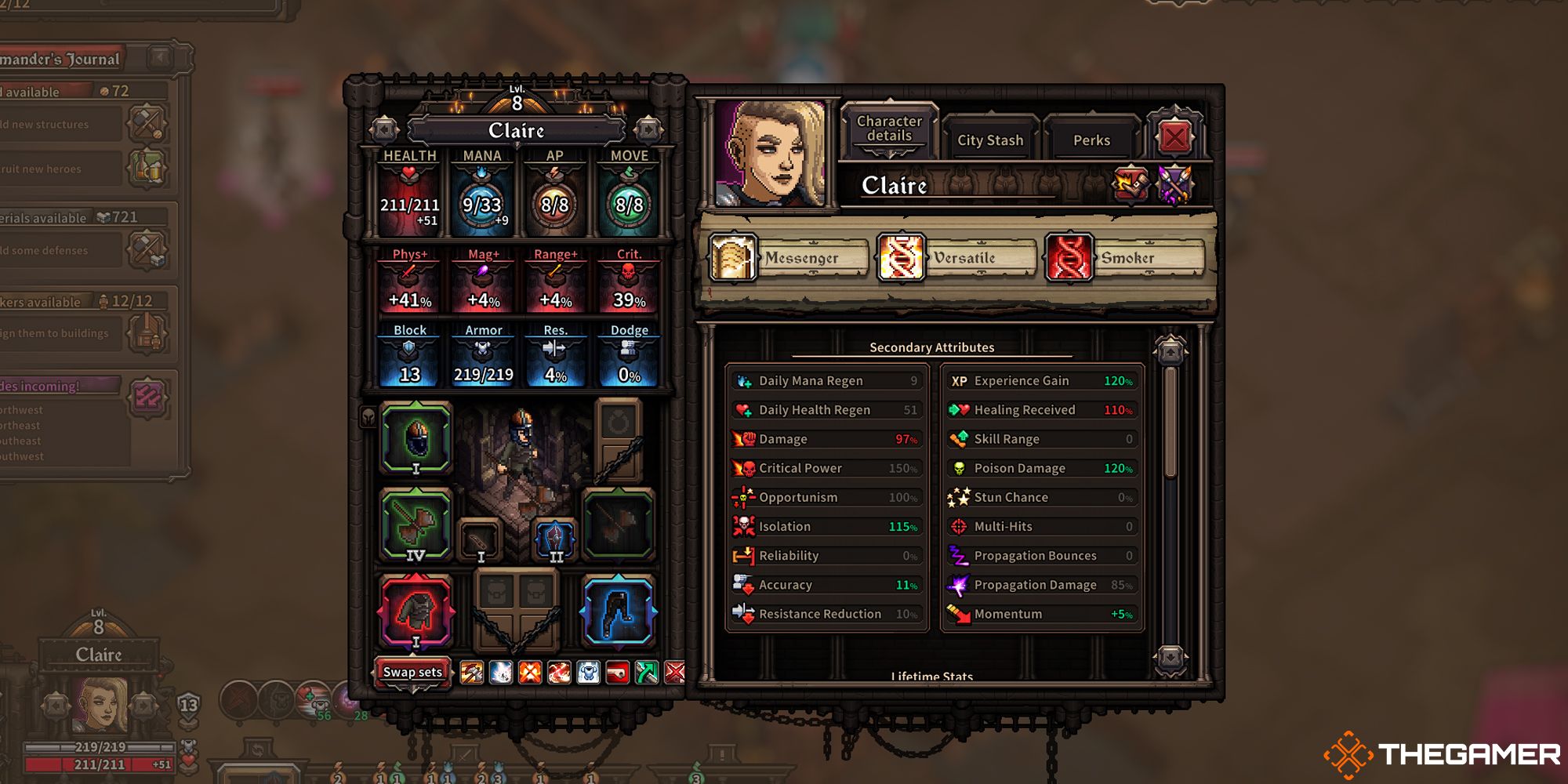 As is with most loot-based games, loot has different rarities, denoted by color. These are colorless, green, blue, and red from least to most rare. However, it’s important to know what these colors mean and the different ways equipment can be improved.

Equipment also has numbers underneath them, ranging from no number to four. These numbers increase the equipment’s base stats, while the color rarity increases the number of additional effects on a weapon, such as increased crit chance. The rarer colors don’t always equate to upgrades, so be careful when looking for an upgrade to your equipment.

2 Set Reminders (You Have Unused Workers!) 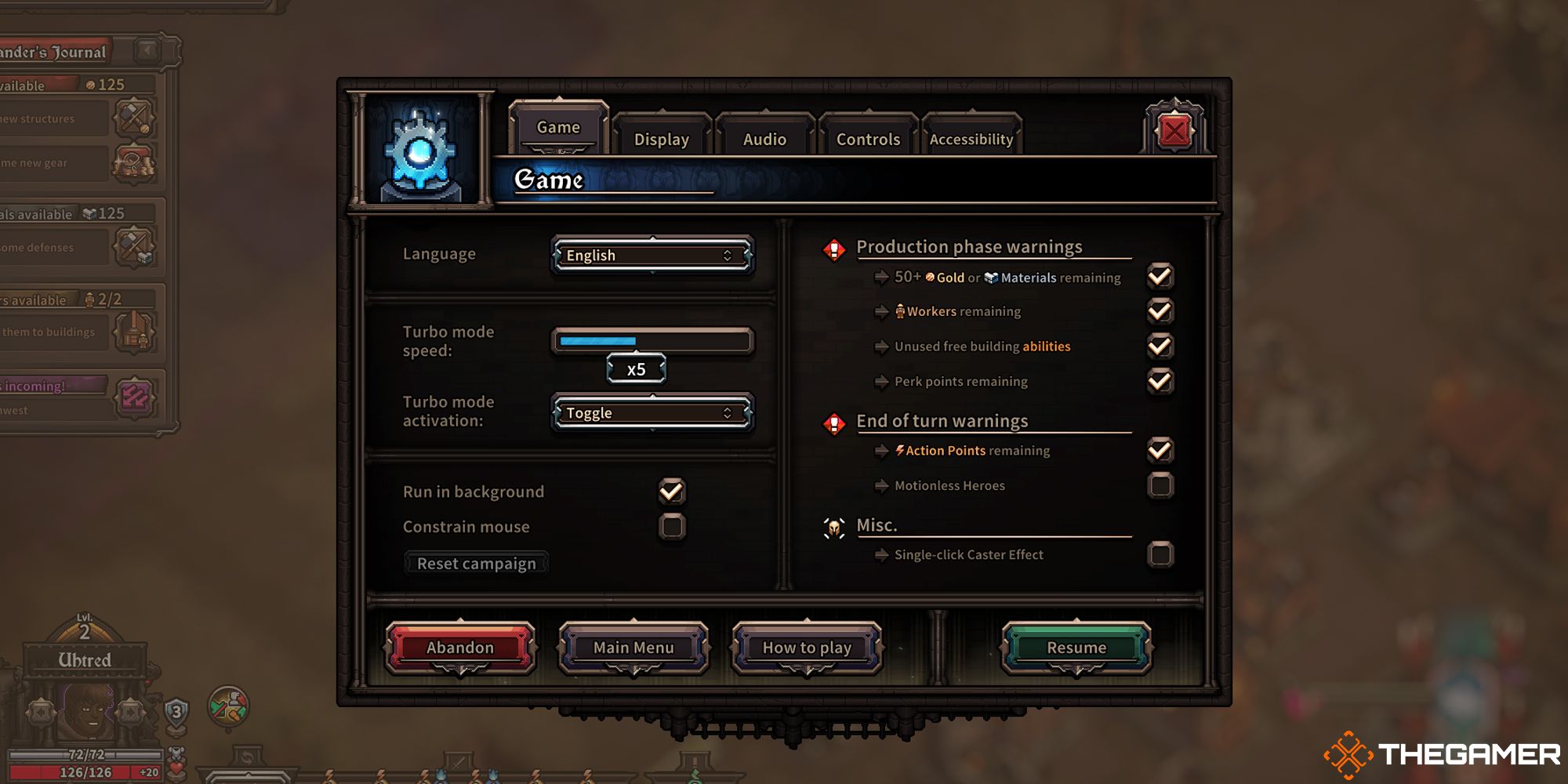 As mentioned before, there’s a lot to keep track of in The Last Spell. Action points, movement, remaining workers, gold, and a myriad of other resources. What’s more, when you end a turn, that’s it, there’s no going back.

To help avoid potentially ending a day without building any walls, set reminders in the game’s menu. There you will find selection check-boxes that will give you a warning if you’re ending a turn before you’ve spent all of a resource, like if you have any action points remaining, or you have more than a set amount of gold or building resource. This will save you a lot of heartache – especially when first starting out. 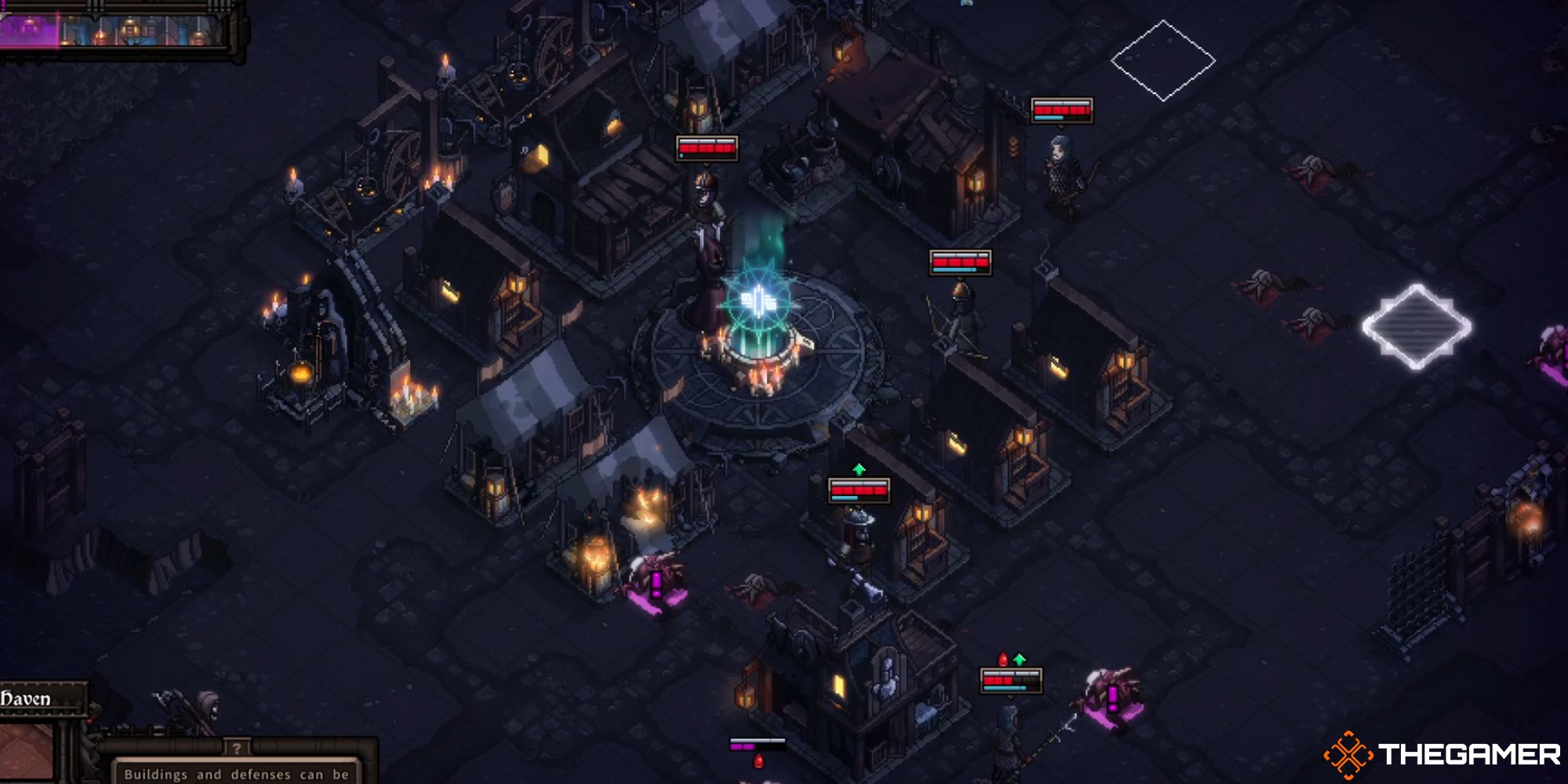 Your attempt will come to an end when one of two things happens. Either the mage circle at the center of town is destroyed, or all of your units are killed in combat. Your units are your most valuable asset, and when it comes to the nighttime monsters, often your only asset.

Therefore, take no shame in retreating behind your walls, your houses, your mines, anything. Even the mage circle itself can survive one or two hits. You can always rebuild destroyed buildings and walls, and the city can survive a little panic, but replacing fallen units is much harder, and they often aren’t as effective as the units you’ve brought up since day one.

Related posts:
05/22/2022 News Comments Off on 10 Things We Wish We Knew Before Playing The Last Spell
Hot News
Monster Hunter Rise: Every Flooded Forest Relic Record
Debate over AI sentience marks a watershed moment
"The Supreme Court Can Go F*ck Itself", How The Games Industry Is Responding To Roe V. Wade
Ghost of Tsushima Fans Discuss What They Want From A Sequel
Hideo Kojima Put A Project On Hold Because It Was Too Similar To The Boys
Recent Posts