Live A Live is a game built around stories. Each chapter, set in a distinct time period, stars unique characters who start at different experience levels and utilize special powers and move sets. The plots of the game are rich, complex, and, at times, emotional. It’s a lot of story to take in, but the experience is well worth the time and effort.

Every story isn’t precisely linear, either. Player choices through actions or chosen text can affect the end result of some chapters—meaning the game has multiple endings. It’s no wonder that hidden plotlines and easily missed narrative moments abound in Live A Live. 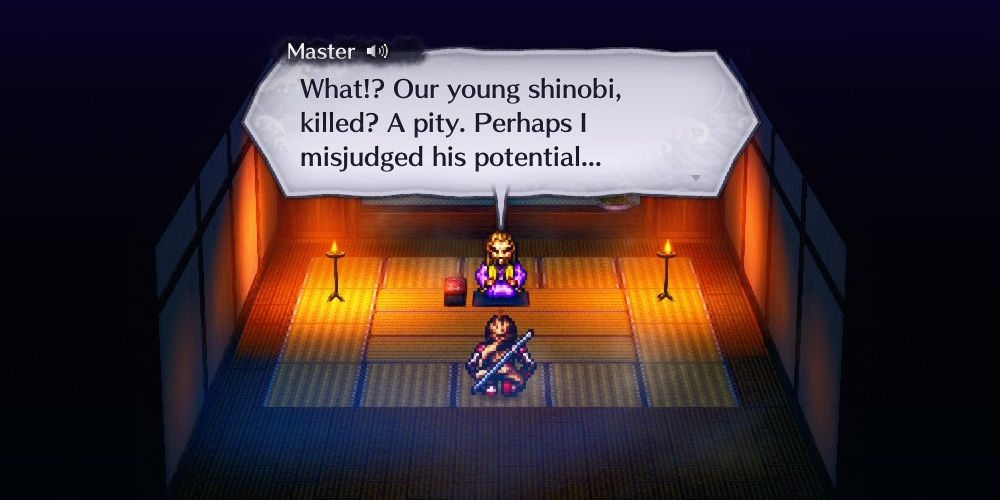 One reoccurring plotline you may have missed: each chapter has at least one “bad” ending triggered by a game over (total party defeat in combat). These alternative negative endings typically end in the death of the protagonist and any party members you may have equipped.

The only exception to this dismal demise? The Present Day: The Strongest chapter doesn’t end the story if Masaru Takahara fails to defeat an opponent in the ring. Instead, Masaru will be ridiculed by whoever defeated him and you can simply retry the fight, without jumping back to the last save point. 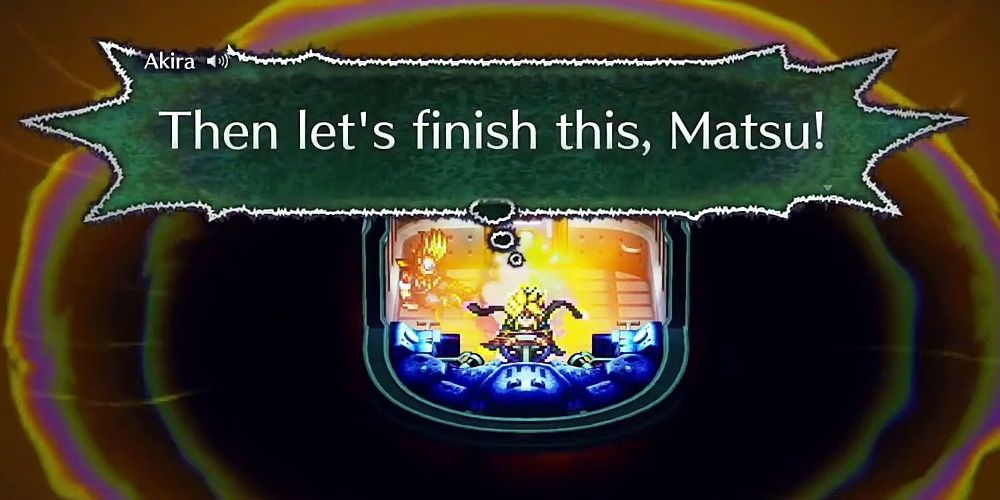 In addition to the standard bad endings for game-overs in each chapter, there are a few special alternative bad endings that take place if you fail at specific points in the story. One example comes from the Near Future: The Outsider chapter.

If Akira dies while controlling the Buriki Daioh in the climax of the scenario, Matsu (also known as Lawless) appears as a spirit and yells at Akira for his failure. This moment is extra heartbreaking since Matsu sacrificed himself to bring the Buriki Daioh, meaning that Akira’s failure in this pivotal moment means that Matsu’s death was for nothing.

6 The Successor: There Can Only Be One 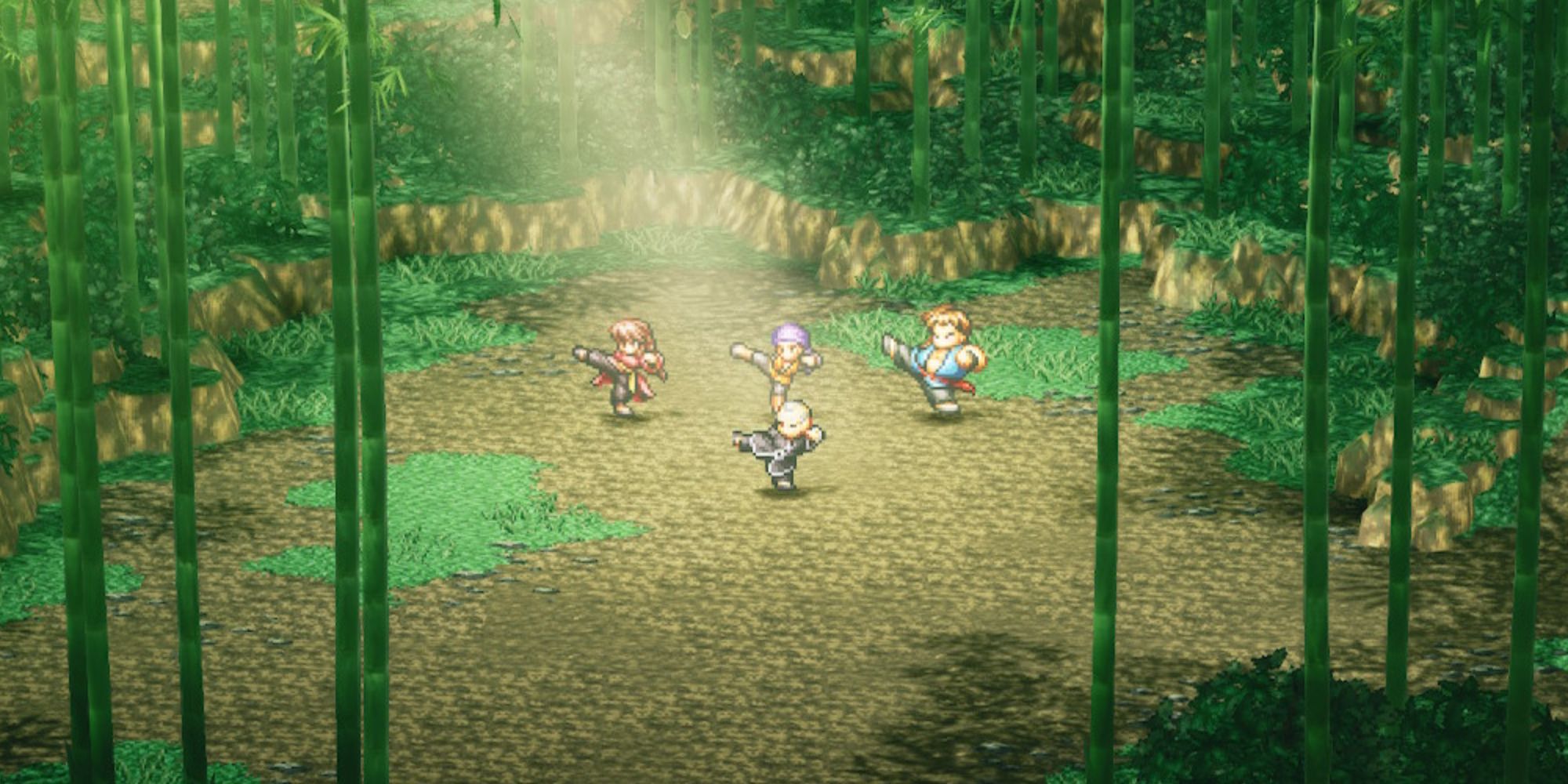 The Imperial China: The Successor chapter is one of the game’s scenarios that has multiple positive outcomes. The premise of the story is the Earthen Heart Shifu is seeking to find his heir and recruits three apprentices as potential options.

Yet, in the end, not all three will survive. The Shifu can only have one successor, determined by the amount of training the three receive and who survives the final fight. The plot itself doesn’t differ much, but the ending changes depending on who you choose to invest the most training into. 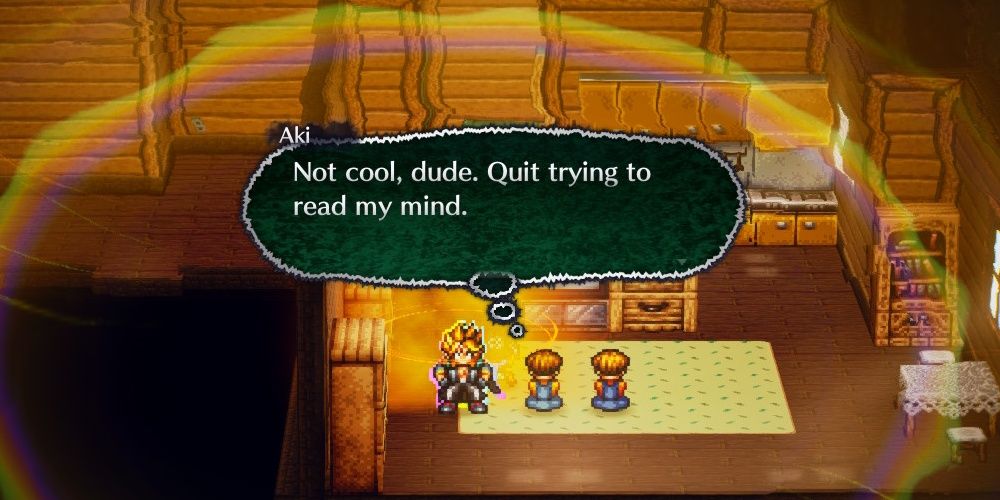 It is a funny moment, but Aki’s reaction is unique among the characters. No one else appears to know when Akira is reading their mind, suggesting the possibility that Aki himself is a mind reader, too. 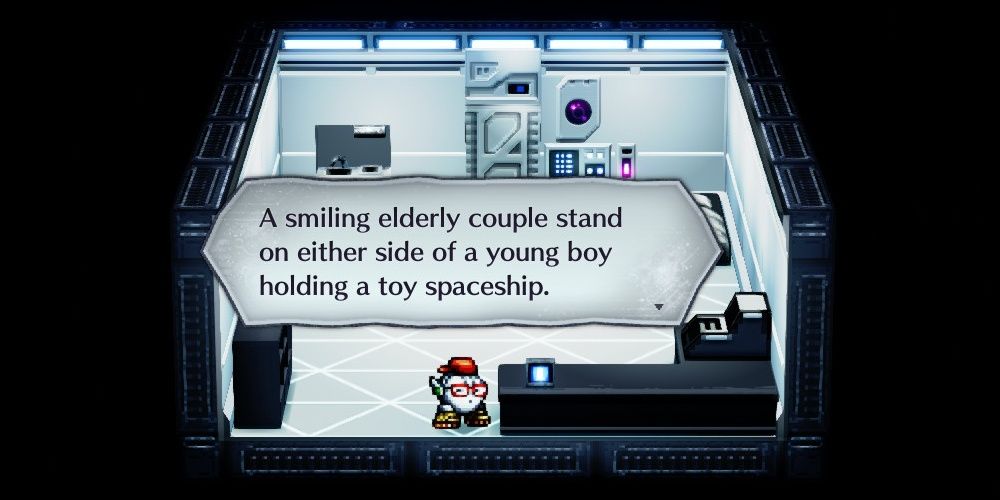 In the Distant Future: The Mechanical Heart chapter, if you explore the ship’s engineer Kato’s room, you can find a picture on the dresser by the wall. Examining the picture reveals what appears to be a young Kato holding a spaceship toy with his grandparents.

This adorable picture of Cube’s creator reveals that Kato has always had his sights set on exploring the heavens. It’s an easy enough detail to miss, but well worth the extra insight you gain about Kato. He’s living his childhood dream during Cube’s chapter! 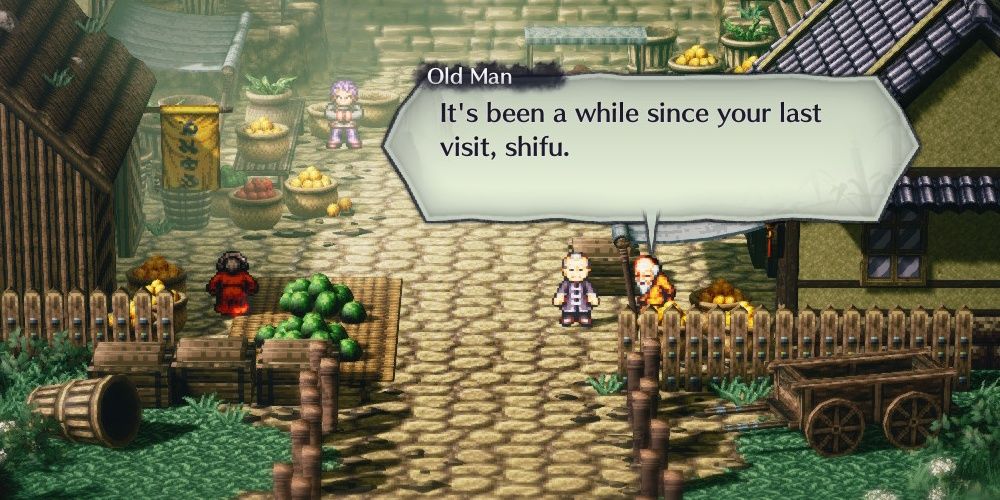 It’s hard to see the Earthen Heart Shifu, the main character of the Imperial China: The Successor chapter, in a negative light. Yet you might feel uneasy when you first enter the villages looking for a new apprentice, as the villagers are clearly struggling. One village is full of sick people, and the other is dealing with a hungry thief. Outside the towns, the bamboo forest is crawling with bandits.

Most telling, though, is the villagers’ reactions to the Shifu’s appearance. They express that it’s been a long time since they’ve seen the master of kung fu, suggesting that the Shifu hasn’t helped his people for a while.

2 Finale: Worth the Replay 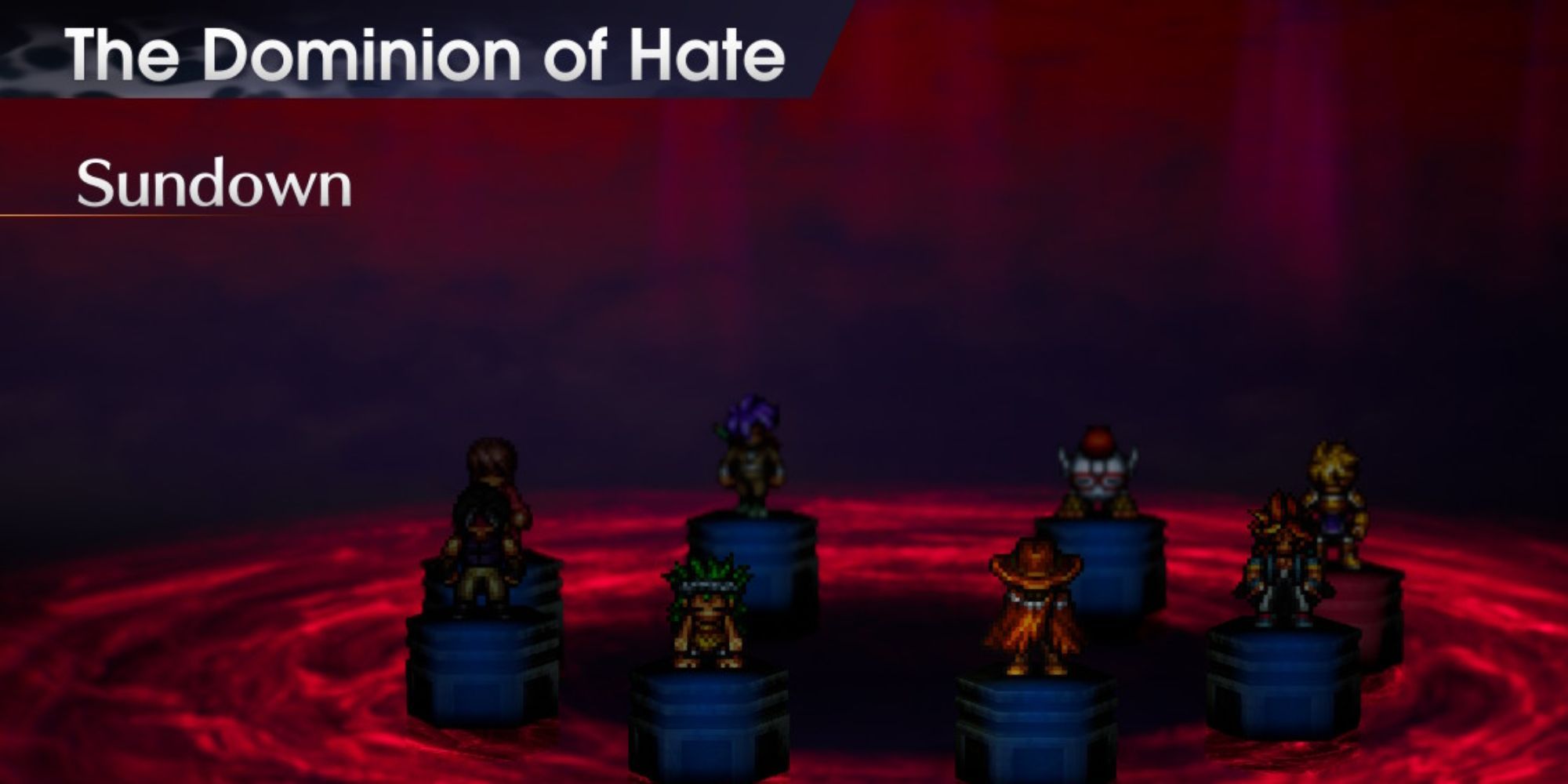 As with a few chapters in the game, the Finale chapter, unlocked after all eight chapters beforehand are completed, contains multiple endings—some good, some neutral, and some tragic.

Selecting a character other than Oersted triggers the hero’s path of the Final Chapter, and how you choose to handle Oersted dictates how the overall story closes. If he’s defeated and killed, the heroes get stuck in time. If the heroes win but spare him, everyone is sent back to their time.

Additionally, the hero you pick determines the final dialogue with Oersted, which shows how the chosen hero grew over their individual story arc. Witnessing these multiple scenarios makes it worth replaying the Final Chapter multiple times as different characters.

Playing as Oersted triggers the other alternate story of the Final Chapter. Instead of fighting against the antagonists, Oersted increasingly becomes one.

There are two outcomes of this path as well: Oersted either destroys the world or wanders aimlessly around a lifeless one. Both are depressing, but worth playing through to get the full scope of the story. 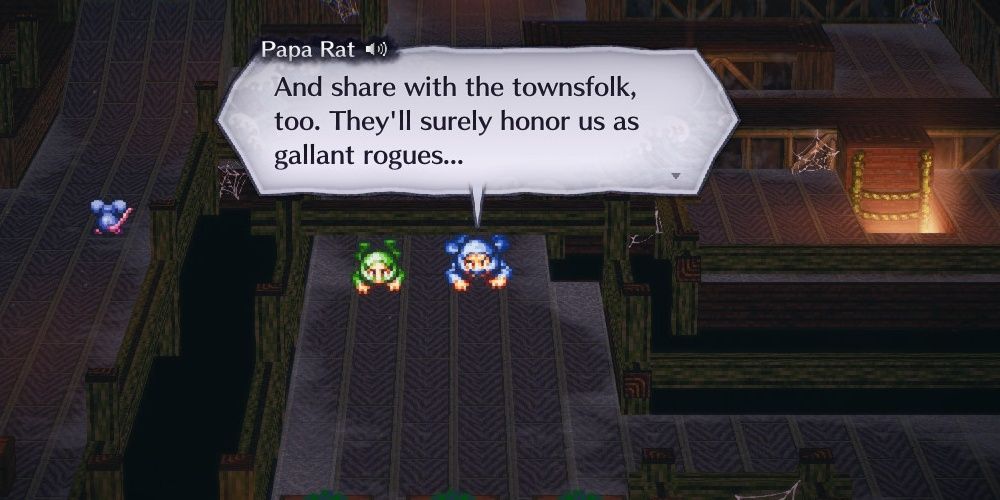 Each chapter features an incarnation of a son who witnesses or is dealing with his father’s death. Some of these scenes are more obvious than others. For example, the Near Future: The Outsider chapter heavily includes a young boy named Watanabe in the overall storyline.

In other chapters, the father-son duo is easily skipped by accident, taking place in hidden spots or only triggered by certain actions you take while playing.