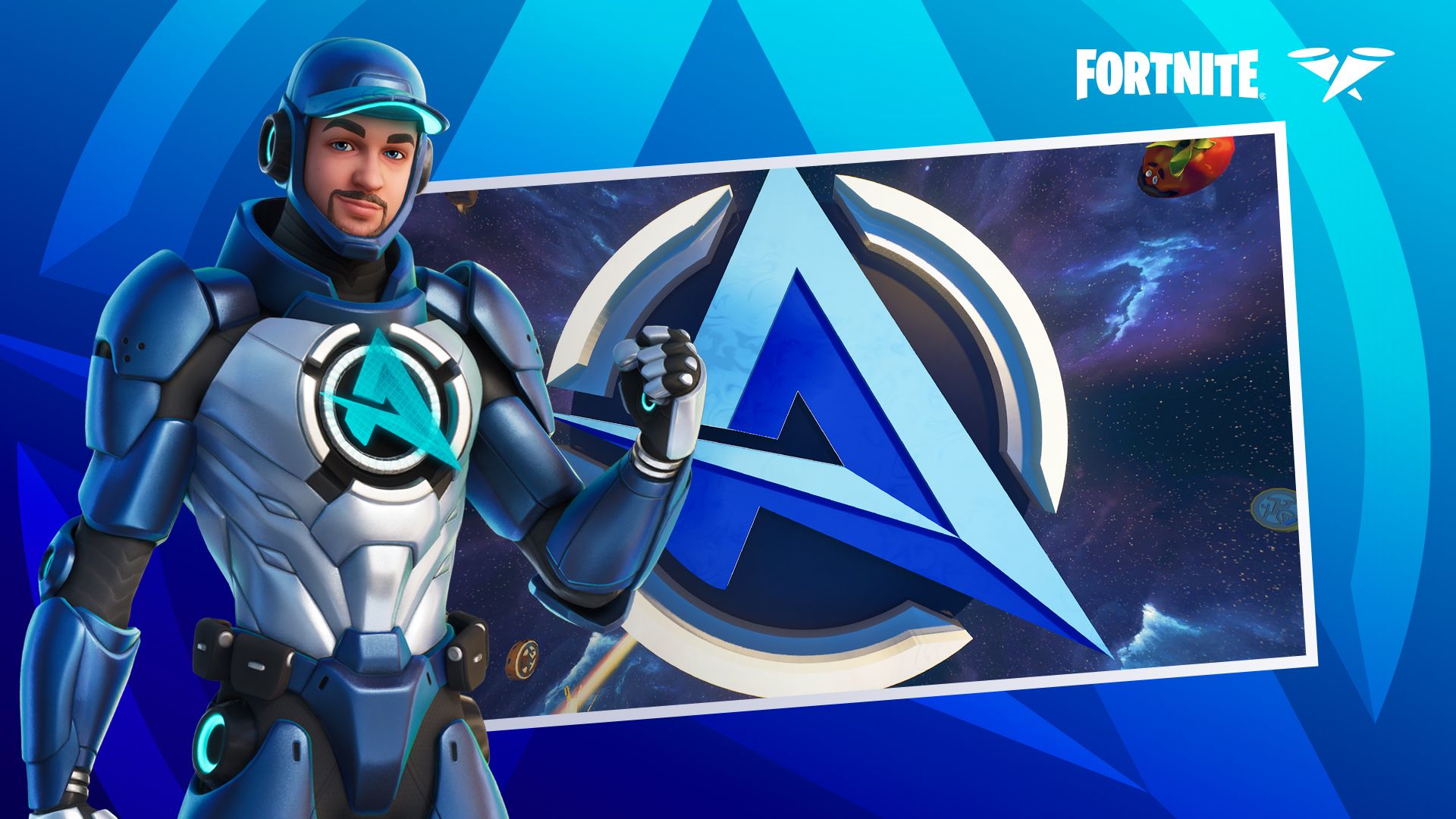 GameCentral speaks with Ali-A about becoming a Fortnite skin, YouTube’s next generation, and the difficulties of sharing your personal life.

If you’ve searched for anything related to Fortnite on YouTube, there’s a high chance you’ve stumbled across Ali-A. The 28-year-old British YouTuber, real name Alastair Aiken, has become one of the biggest content creators for Fortnite since it was released in 2017, with over 17 million subscribers on his main channel. Like Ninja before him, his dedication to the title has manifested into an actual recreation of himself being implanted into the game’s universe.

Launched last week, Ali-A’s Fortnite skin is the latest addition to the Icon Series – a series of cosmetics based around celebrities, artists, and influencers. Since it began in 2020, with Ninja’s debut outfit, the line-up has become fascinatingly chaotic – ranging from other content creators like LazarBeam and TheGrefg to basketball legend LeBron James, singer Ariana Grande, and England footballer Harry Kane.

Ali-A’s inclusion marks the first time a UK YouTuber has been recognised. While it’s an important moment of acknowledgement for someone who has built his career compiling tips and covering Fortnite’s relentless updates, the process of making the skin a reality involved its fair share of work too – with Ali-A’s back-and-forth collaboration with Epic Games starting last year.

‘I was super hands-on with it,’ Ali-A says. ‘I had a clear vision from the beginning which really helped. I even actually presented to Epic Games a small slideshow – it wasn’t very impressive – but just ideas I had come up with and how I thought it’d be really cool to be represented within the game. For me there are two extremes, you can go for a likeness – so it’s you in-game and it looks as close to you as possible – or you can go for this super-version of you. I was like, I would love to have both sides of that scale. And that’s what ended up happening.

‘We were very much on the same page from the beginning. I gave a lot of critical feedback, whenever they emailed me, I’d instantly reply. I’d often jump on my PC and start recording video feedback for them just to be hyper-specific. You only get this opportunity once and the fact that I had it, I was like I’m going to do it as big as possible, as best as possible, and I think it’s resulted, I hope, in a skin that people really enjoy.’

In a world where success is often tied to chasing trends to maintain a high viewership, Ali-A sees this skin as validation for his commitment through Fortnite’s oscillating popularity over the years. As someone who originally started making videos around Call Of Duty, he’s no stranger to pivoting his channel’s focus to be at the mercy of views – as he’s noted himself in a video from last year. ‘My YouTube channels are my business now, it’s grown from a hobby to a business and I’ve got to do what works,’ he said at the time.

While he’s now juggling multiple channels across different games, presumably for a financial safety net, there’s a sense Ali-A’s success with Fortnite, affirmed by the accolade of his own skin, will make his presence in the community a permanent fixture.

‘I don’t think I’ll ever get over the fact that I’m in Fortnite. For [Epic Games] to turn around to me specifically and say, we want you in the game, you can’t get any bigger than that. In my mind, that’s the peak you can get to as a creator in the Fortnite space, so it is super validating.

‘Fortnite is still such a huge game and it’s been the biggest game in the world at one point, but just like with any game some people get bored of it, some people move on and lose interest, but I’ve stuck around for that whole period,’ he says.

‘I’m still here making content every single week, and I think it’s a testament to the fact that I’ve stuck with the game [and] covered so many aspects. My fanbase has followed me through those years and for Epic Games to acknowledge that, it’s really, really special.’

He might’ve reached new levels of popularity in recent years with Fortnite, but Ali-A is counted alongside KSI and PewDiePie as part of YouTube’s first wave of breakout stars. He started making gaming videos in 2009, using a device ‘sold functionally to record people’s DVD players’. After some success, he decided to take a gap-year, aged 18, to pursue YouTube full-time when it was barely acknowledged as a viable career path, with his fallback option to study ‘something maths-related’ at university.

Flash forward to 2022 and Ali-A’s one-man show has grown into a business supported by a team who assist in editing, uploading content, and managing his finances. He’s an example of what you can achieve on YouTube, at a time when competition to earn the same status has never been higher. If he was starting out in today’s YouTube climate though, does he believe he’d have the same level of success?

‘I would always say there was definitely a bit of luck involved for my success,’ Ali-A says. ‘No one was doing it right at the beginning, so I had the right interest in the right kind of thing all of those years ago. If we jump forward to now, what I would always say is obviously there’s a lot more competition and loads of people want to do it, but at the same time, the number of people that were watching gaming videos when I started versus now – YouTube is the space to watch gaming videos and people understand the platform and the fact you can make a job out of it.

‘So I think if you’re actually really talented and really good at making video content and you do start to get some momentum and some traction, you’re probably going to blow up and grow quicker than ever now, [more] than even like three, five, 10 years ago.’

Ali-A’s decade-long experience staring at YouTube’s backend metrics is clear during our conversation. When asked if he’d do anything differently if he started out now, he gives a surprisingly analytical answer about click-through rates, experimenting with thumbnails for the best results, and tips for boosting average view durations with snappy introductions.

It’s this drive to watch the numbers go up which has been a source of criticism in the past – even among his peers. PewDiePie posted a video in 2018, at Fortnite’s peak, accusing him and other Fortnite creators of clickbait tactics. This in turn catapulted the widely-adopted meme riffing on Ali-A’s video introductions into the stratosphere, which was later mimicked by Lazarbeam, KSI, and many others.

To his credit, Ali-A has taken these knocks in good spirits, capitalising on it with his own reaction videos years later. Even though he’s clearly worked the YouTube game to his benefit, in ways which might be viewed cynically – like starting a joint channel with his wife and fellow content creator Clare Siobhan – the mixing of his professional and personal life on-camera is something he’s trying to avoid as he gets older.

‘I probably have a bigger divide now than ever between what is business, Ali-A and work, versus what is Alastair, what I’m doing at home and everything off-camera,’ he says. ‘Obviously the more you share, often it helps build up your brand, it builds up that personal connection between your audience and you. The more they know you, the more likely they are to stick around and be invested in you.

‘I think I’ve always had quite a big focus on the game that I’m playing, so I’ve never had the reliance on oversharing my personal life, but obviously there’s lots of things we’ve shared in the past. Clare and I got engaged a few years ago, we got married last year, and I think we’re going to be sharing our wedding video soon.

‘But there’s definitely a fine line, like if I’m going out with mates into London on Saturday, I’m not live-tweeting everything and taking a load of selfies. That’s just me having downtime. I think the one thing I’ve learnt that’s super valuable, for my mental health and just not burning out, is having that balance.’

He states, however, his reluctance to overshare might also be a sign of YouTube’s place in culture in 2022. ‘I think maybe a few years ago I’d share more,’ he says. ‘Like, when I moved out of my parents and moved into a new flat, I would instantly share with everyone. If I was getting a new car, I’d be like ‘Oh guys, this is my new car!’ It was kind of a different time in YouTube, people were really excited for you to hit those milestones. As YouTube has become more mainstream, it’s kind of understood that if you’re in the YouTube space and you’re big, you’re going to have some money.

‘So if you’re posting about this new car or house, it’s not really as exciting as it was. It’s like, well maybe you’re just flexing, so now I keep those things to myself.’

Looking ahead, Ali-A’s next venture is reflective of his veteran position on YouTube. Starting in June, he’ll be joined by the likes of Loserfruit, Vikkstar123, and DanTDM as a judge on a talent competition designed to find the next big gaming content creator. The winner of the uTure Show will be awarded $100,000 (£79,300), along with lots of exposure to help ascend the algorithm ranks.

It remains to be seen whether the talent show format will adapt well to YouTube, although with the volume of competition on the platform, the exposure from big-name personalities might have become a somewhat unfortunate, yet valuable necessity in 2022 and beyond.

‘Nothing like this has been done before,’ Ali-A says. ‘I’m really excited to get behind people, investing my time in helping them and imparting some of the stuff that I’ve learnt.

‘YouTube’s not going anywhere, so why not help the people coming up and maybe be even bigger than me one day?’