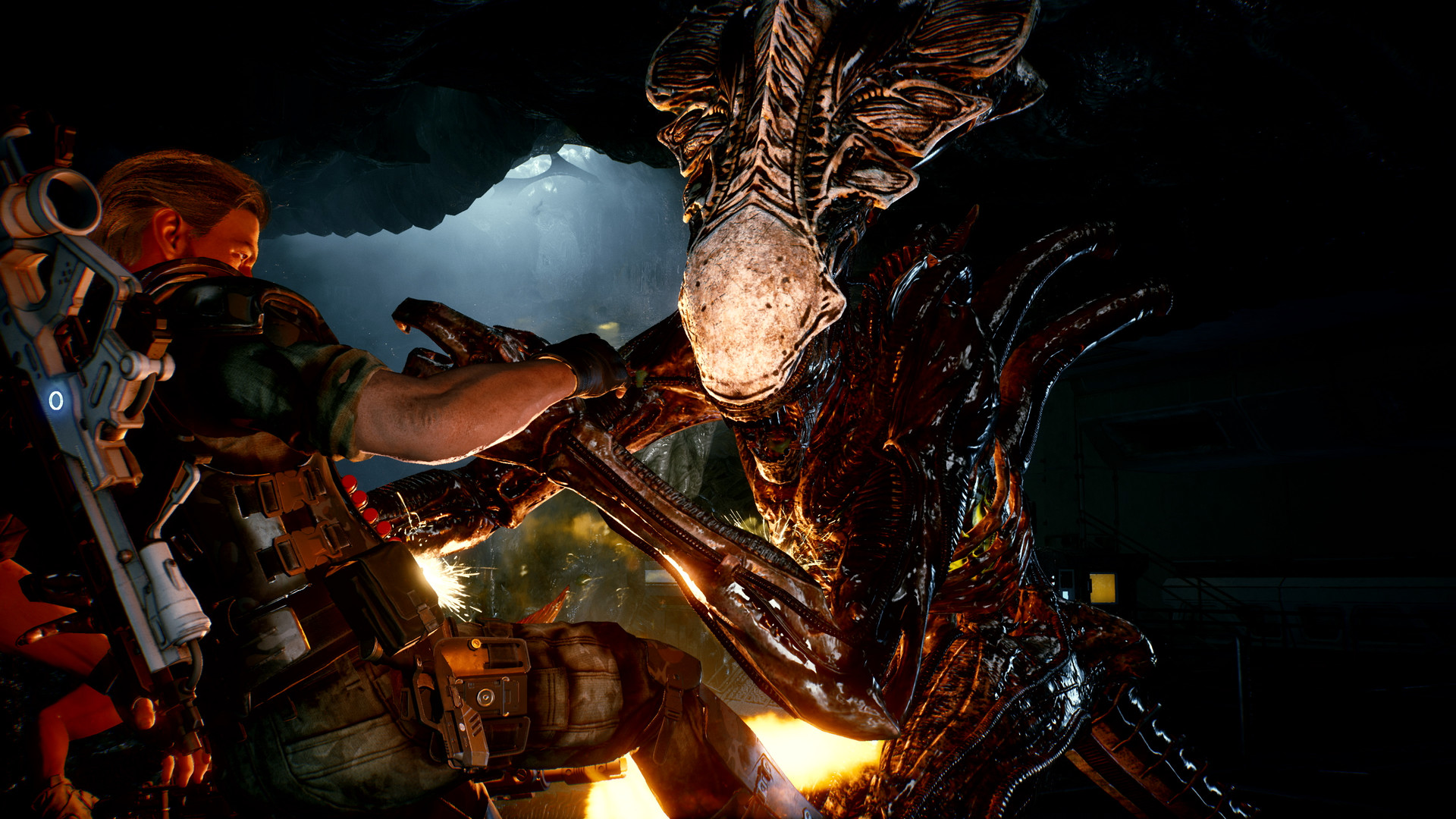 The latest attempt to turn 80s classic Aliens into a video game is a co-op shooter that’s aiming to be Left 4 Dead in space.

Aliens, Predator, The Terminator, RoboCop… 80s action movies in general are still lauded for their particular brand of high concept ultraviolence but the sci-fi action films of the era are especially memorable. So memorable, in fact, that you’re never allowed to forget them, as films that are often twice the age, or more, of their target audience are constantly regurgitated in terms of sequels, reboots, TV shows, and – of course – video games.

All four of the above have appeared in Mortal Kombat and the first three are already in Fortnite. And while RoboCop is probably only a temporary oversight he has a new standalone game in development, by the same studio that did the most recent Terminator game. The Predator has become an increasingly common guest star in any multiplayer game that will have him, while Aliens was meant to be enjoying a video game revival by licence owners 20th Century Fox… until they got bought by Disney.

People have been making games of these movies for over three decades now and while the majority have been poor it’d be wrong to say there haven’t been any successes. But the law of diminishing returns means it’s increasingly difficult to make a worthwhile game out of a concept that is so overfamiliar and whose gameplay potential is made increasingly narrow by the fact that so many other games have borrowed from the movies over the years, to the point where being an official tie-in takes away more than it adds.

There are many younger gamers who probably assume that the aesthetic of Halo’s military was its own invention, but of course it was ripped wholesale from Aliens – to the point where even James Cameron has noted the similarities. That’s just one example amongst hundreds though, to the point where it’s hard to imagine the video games industry without Aliens. Which is unsurprising given the movie’s 1986 release came at a formative time for video games, resulting in 35 years of borrowed imagery and paraphrased dialogue.

The influence of Aliens on video games is a fascinating one, that we could ruminate on at great length, but unfortunately Fireteam Elite is a considerably less interesting subject. It’s basically Left 4 Dead but with aliens instead of zombies – and not nearly as good. The only other thing you need to know is that, while developer Cold Iron do their best, the budget for the game is obviously very low, with no dedicated single-player mode and things like non-player characters who talk without moving their lips.

Left 4 Dead is a perfectly reasonable template to use for an Aliens tie-in, as despite being a co-op shooter, the original games could be very tense and frightening, as you struggled with limited ammo and zombies lunging out of the darkness at you. Fireteam Elite immediately gets this wrong though by making it very obvious where the aliens are at all times and ruining the atmosphere with garish interface overlays that highlight enemies in neon or post big red crosses on screen to indicate what should have been obvious simply through animation.

The low budget graphics make an acceptable attempt at mimicking the look of the first two Alien films, but the low-tech lighting is nowhere near realistic enough to create any real atmosphere. The biggest problem though is how ineffectual the aliens are. The second movie is often criticised for lessening the threat of the individual creatures but if any of them got near a character they were still dead in seconds – something that Rebellion’s Aliens Versus Predator games mimicked perfectly.

In Fireteam Elite though the aliens are reduced to being no more dangerous than an angry dog, with even larger versions, which are made to more closely resemble the creature from the first film, incapable of a one-shot kill unless you mess up a QTE sequence. Their animations are indistinct and even the sound effects, including the famous pulse rifle, sound indistinct and neutered.

Although there’s no single-player mode you are able to play the game on your own, with two computer-controlled allies taking the place of human players. There is also a story linking the various missions together, although you can probably guess the main plot points of that without even playing the game.

Further reducing the tension is that you’re constantly having to listen to a voiceover explaining objectives to you but given that Aliens’ sci-fi corridors are one of the most copied elements of the film something needs to take your mind off all the busywork of accessing terminals and welding doors.

Fireteam Elite is trying its best though and while some may resent the scripted nature of the co-op missions, which do come across as rather old-fashioned, the combination of creeping down corridors to your destination and then having to defend your position in the subsequently inevitable siege does have a primal appeal.

There’s a good range of enemy types, including synthetics and alien variants that can spit or explode acid. The problem is though that, unlike Alien Isolation, the aliens are never really very stealthy. Some, including facehuggers (who are oddly not in the game much), will hide round corners or duck in and out of air vents but most of the time everything just runs straight at you or hovers around in the near distance for ranged attacks.

Rather than being the main draw, the need to be authentic to the movies stifles any hope the game has of doing anything new or interesting. It doesn’t have the budget to look like the film and that means it’s just left with enemies that are all far too similar and protagonists who don’t have anything much in the way of flashy special abilities. The game does its best in terms of loadouts but the most interesting pre-mission element is picking a challenge card that involves a hinderance like having your gun or motion tracker jam.

One of the most peculiar design decisions is simply the fact that the game is third person instead of first person, which seems bizarre given how it’s not only less immersive but often impractical given the number of narrow corridors you have to traverse.

The final failure is the lacklustre Horde mode, which is unlocked after you beat the main campaign. We suspect this highlights the exact moment at which Disney bought 20th Century Fox, and all financing for the game suddenly stopped, as it’s so bare bones you can see the marrow.

Fireteam Elite would be improved with better graphics and more game modes but that’s really only half the problem. While Aliens was a great influence on the early days of video games it has little relevance now, especially as military technology catches up with 1986’s version of the future. However, that probably won’t stop other publishers trying again sooner or later, for if there’s one thing the Alien movies teach us it’s that the company never learns.

In Short: It’s trying its best with an obviously low budget but rather than replicating the tension and thrills of Aliens this has much more in common with one of its lacklustre sequels.

Pros: The developer clearly has a love for the source material and the loadout options and challenge cards are relatively well developed.

Cons: The action is bland and repetitive, with no tension or atmosphere. Enemy behaviour and design are equally uninteresting and predictable. Limited game modes and options.