With October just around the corner, the Animal Crossing: New Horizons Halloween event is gearing up to begin — and the game’s enormous fandom is getting into the spooky spirit early.

Animal: Crossing New Horizons launched way back on March 20. Around six and a half months later, even the most enthusiastic launch day players might find their interest gradually beginning to wane — despite Nintendo’s attempt to guilt-trip those whose play time started to fall off). Other games come along, the daily grind becomes a little tiresome… it’s completely natural.

Despite this, one thing that’s always sure to bring players back on board is a special event or update. Animal Crossing has been delivering a steady stream of these since launch (its controversial Bunny Day being one high-profile example), offering players the chance to snag some exclusive furniture or other assorted collectibles.

Halloween is next up, an event that offers great opportunities for seasonal shenanigans in all kinds of games. New Horizons’ festivities will last all October long (as will Pokémon GO’s), as Nintendo’s Fall update trailer demonstrated. You can check out the trailer for yourself below.

Candy will be available to buy from Timmy and Tommy all month, and pumpkins will also be added. Pumpkin patches are an exciting prospect for Animal Crossing fans, and though the update isn’t yet released, many of the faithful are already overhauling their islands and planning out plots of land in preparation for the new fruit’s (yep, pumpkin is technically a fruit) arrival. 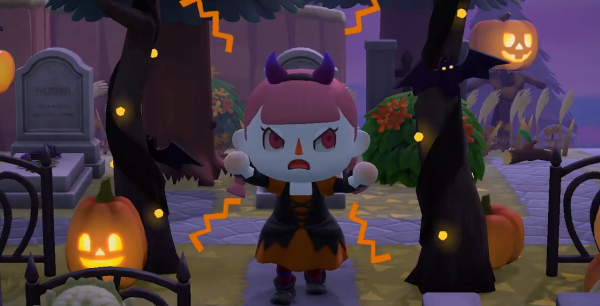 With New Horizons’ addition of paths of different textures, players have been able to make themselves excellent backyards and flower gardens without the need for custom pattern tiles. Pumpkins may not have been added quite yet, but as Polygon reports, patches and pumpkin-themed paraphernalia have been springing up on islands all over the world. Here are just a few select examples:

There you have it, Animal Crossing fans. If you’ve extracted all the joy you can from ocean swimming and diving (players had a heck of a lot of creative fun with that), it’s time to boot up your island and jump on board with the latest trend: pumpkin patches!

Related posts:
09/29/2020 News Comments Off on Animal Crossing: New Horizons Halloween Event Prep Sweeps Player Base
Hot News
Ghost of Tsushima Legends Raid release time and PS4 launch update
WoW Shadowlands Launches Thanksgiving Week, Those Poor Developers
Torchlight 3 Celebrates Halloween With Gear ‘N’ Goblins Update
WoW Shadowlands new release date revealed and its great news for World of Warcraft fans
Xbox Games With Gold November 2020 Free Games Revealed
Recent Posts
This website uses cookies to improve your user experience and to provide you with advertisements that are relevant to your interests. By continuing to browse the site you are agreeing to our use of cookies.Ok