Mobile game spending could grow 20% to $120 billion in 2021, according to a report by mobile data and analytics provider App Annie. App Annie also said that overall mobile app spending hit $143 billion in 2020.

The San Francisco company’s State of Mobile 2021 report said that the pandemic accelerated mobile adoption as consumers used their mobile devices to connect, work, learn, play and escape despite COVID-19 restricting their way of life.

“Mobile adoption has really advanced two to three years during 2020, and a lot of it is a result of the pandemic,” said Amir Ghodrati, director of market insights, in an interview with GamesBeat.

The top markets driving this spending included China, United States, Japan, South Korea, and the United Kingdom. In 2020 ad spending grew to $240 billion, up by 26% from 2019.

And funding remained strong: $73 billion was invested in mobile companies which doubled compared to the previous five years, according to Crunchbase.

Time spent on mobile surged to an average of 4.2 hours per day on Android, which amounted to 3.5 trillion hours, up by 20% and 25% respectively from 2019. That mobile time spent surpassed the average 3.7 hours of live TV watched per day, Ghodrati said.

It’s not just the young spending all their time on mobile. The time spent in apps crossed generations. In the U.S., Gen Z, Millennials and Gen X/ Baby Boomers spent 16%, 18% and 30% more time per user in 2020 compared to a year earlier in their most-used apps.

The power of gaming 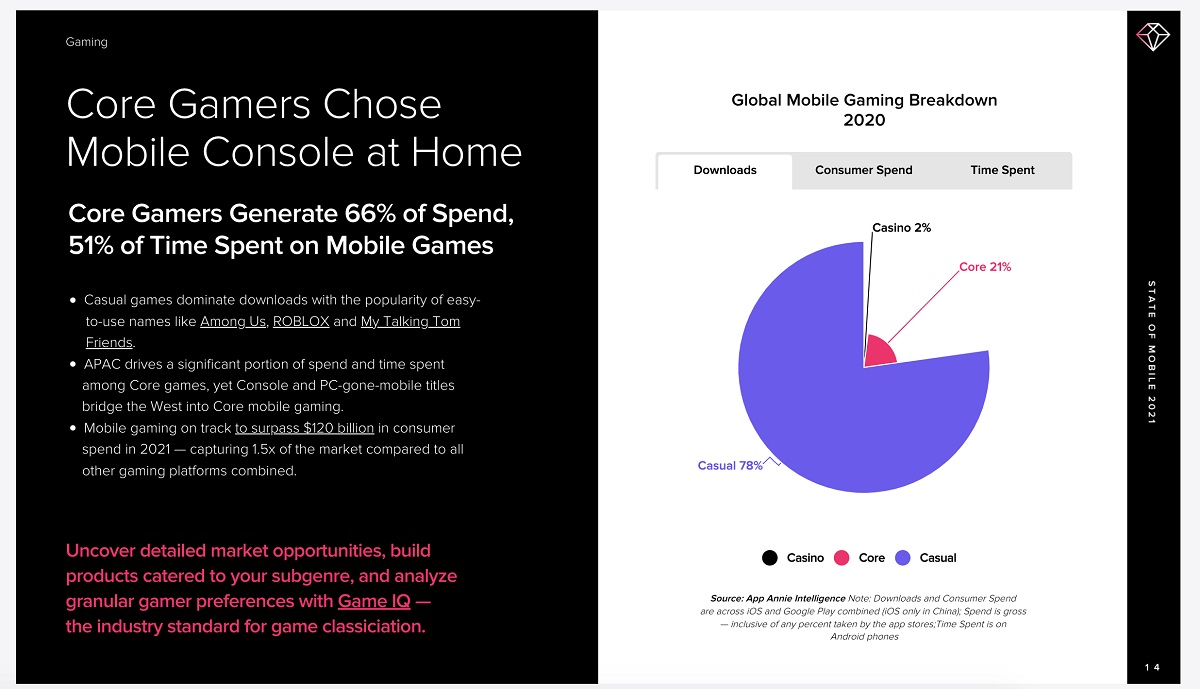 Above: People played games on mobile devices even when at home.

“We’re expecting mobile gaming to surpass $120 billion in consumer spending 2021, and that’s still on track,” Ghodrati said. “It’s still bigger than all these other forms of gaming combined, including the console, PC, Mac, and handheld. That is still very true even with the launch of new consoles.”

“Developers have changed how they’re developing their apps to account for this new usage,” Ghodrati said. “People have also realized that they should be spending money where they are spending time, which is increasingly on mobile.”

Mobile gaming is more than 50% bigger than all of the other gaming categories combined, App Annie said.

The breakout games included Among Us, My Talking Tom Friends, and Brain Test: Tricky Puzzles.

Games held up even when people in certain countries started to go back to work or socialize in physical locations again.

“Not every part of every industry is remaining at the unsustainable peak during the March timeframe when everyone just started downloading everything,” Ghodrati said. “But gaming is remaining strong, and games like Among Us are still performing quite well. People are still trying out new different types of things. And they’re playing heavier games a little bit more than they were before.”

But the habit of playing games has stuck around for those people who picked it up, Ghodrati said. Pokemon Go faced challenges at first but grew once Niantic adapted the game so you could play it remotely more easily. Roblox also grew significantly during the year. Generally speaking, it takes 66 days for people to pick up new habits, and during the pandemic, people have had much more time than that, he said.

“More people will continue to play games moving forward, and we should see a bump from that in 2021,” Ghodrati said. “Mobile is just more convenient. Whenever there’s an opportunity to use a mobile device, people will do it more.”

December was a strong month for games, as it usually is, Ghodrati said. 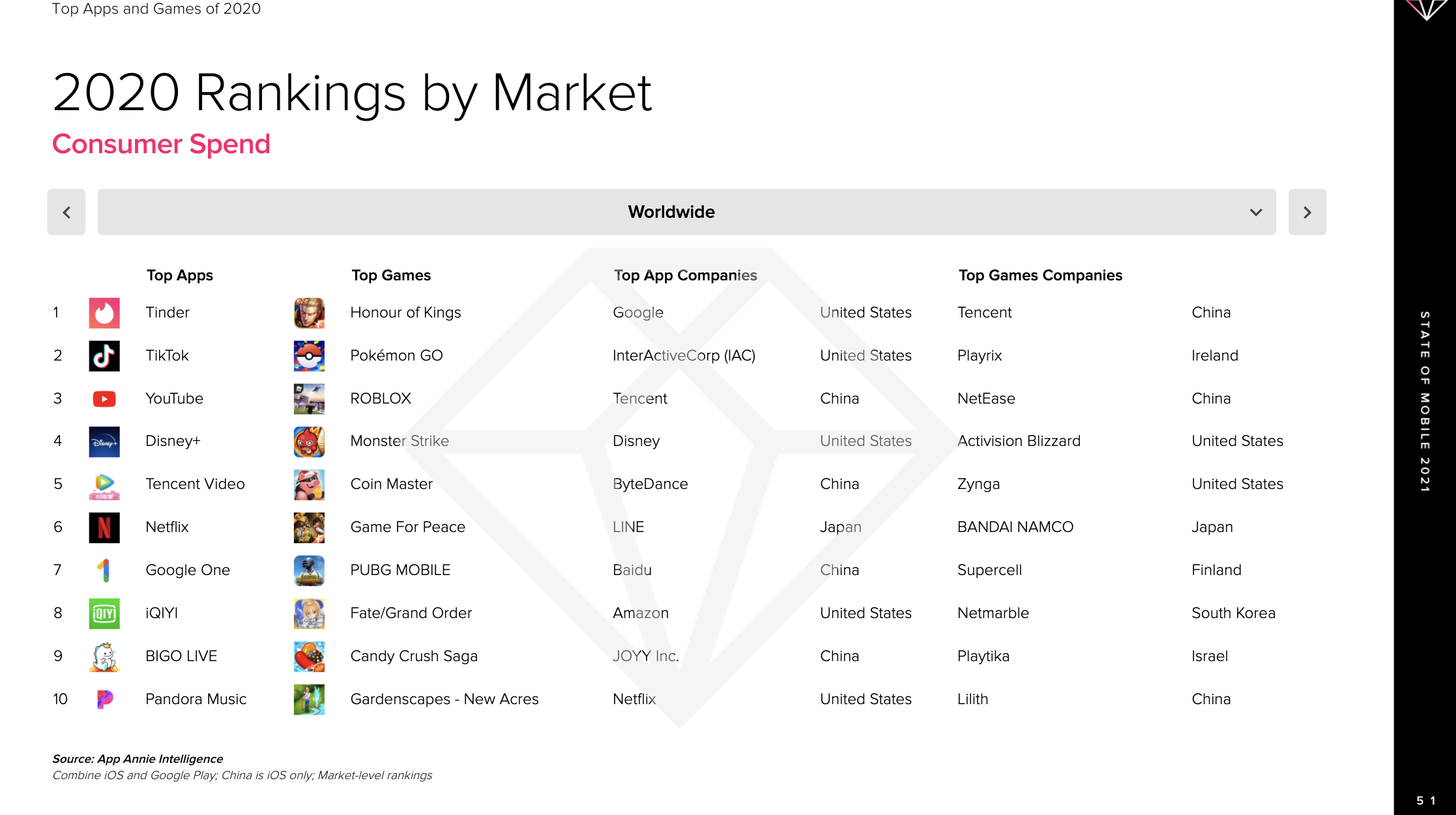 Social networking apps also took the center stage. Time spent per user increased by up to 325% annually. TikTok is on track to hit 1.2 billion monthly active users in 2021 as consumers look to stay connected as well as entertained.

App Annie said that strategic celebrity-mobile app collaborations spurred downloads by 2.7 times. The most successful one was Travis Scott’s concert in Fortnite.

Medical app downloads grew 50% in 2020 from a year ago — spurred by demand for COVID-tracing and telehealth apps. Downloads surpassed 3.2 billion across health and fitness and medical apps.

As people worried about money, they focused on finance apps. The stock market boom was fueled in part by mobile usage, as participation in stock market on mobile grew 55% during the year. They also adopting shopping apps because they couldn’t go out to the malls anymore.

The streaming platforms did well. There were 40% more hours of video streaming on mobile in 2020, as people binged on services like Netflix and Disney + to distract themselves from the pandemic. By 2021, the average mobile streamer in the U.S. is expected to download 85% more video streaming apps compared to before the pandemic. YouTube saw time spent per user rise six times more than the next-closest app, capping at 38 hours of streaming per month on average.

“We’re finally seeing that spend catch up to where people have been spending their time,” Ghodrati said. “That comes to food delivery and finance apps and games.” 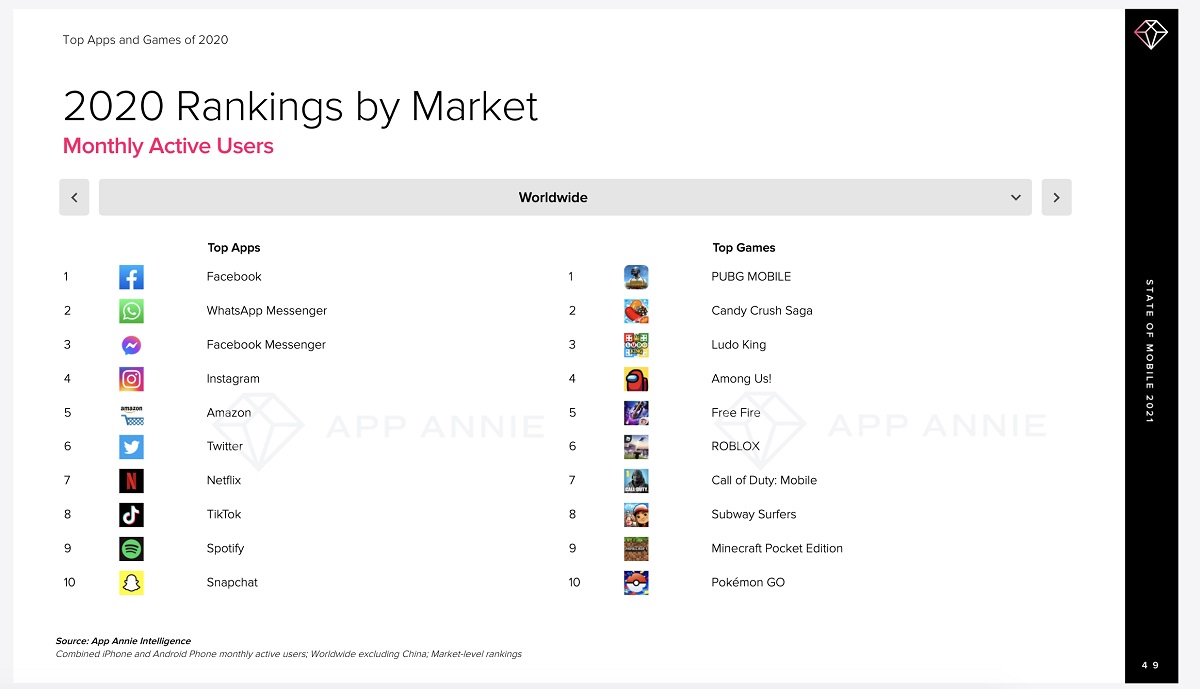 Above: The top apps and games.

Publishers are benefiting from this shift. About 25% more publishers earned more than $2 million per year on either Google Play or iOS. Still, 97% of publishers who monetize through iOS earned less than $1 million and so they would benefit from Apple’s recently announced small business program, which reduces fees for such developers from 30% of revenues to 15%.

After 10 weeks, iOS 14 operating system adoption is growing at a 24% faster adoption rate than iOS 13. Close to 75% of users have upgraded to iOS 14. That means that advertisers should prepare for the implications of Apple’s change to the Identifier for Advertisers (IDFA), which hobbles targeted advertising in the name of increased user privacy.

“If people are updating fast, then IDFA changes will come faster and you need to be on top of that very quickly as a developer,” Ghodrati said. “You’ll have to focus on aggregated data and understanding what is going on without having access to the same type of information you may have had before.”

Will 2021 numbers fall short of 2020’s pandemic-driven growth? Ghodrati doesn’t think that will happen, and he thinks game companies should focus on making games based on the new normal.

“This is like crossing the Rubicon,” Ghodrati said. “There are a lot of reasons that it won’t slip back. There are lots of reasons for publishers to go after the engaged audience. It’s going to be continued growth for quite a while.”

Related posts:
01/13/2021 News Comments Off on App Annie: Mobile games could grow 20% to $120 billion in 2021
Hot News
Gladbach, Schalke und Co. – Alle Fußballskins in Fortnite und wie man sie bekommt
zoloft discussions
Cheating-Vorwurf gegenüber Warzone-Rekordhalter
Lösung der Player Moments SBC zu Layvin Kurzawa in FIFA 21
20 Millionen Dollar! Fortnite reagiert auf Beschwerden mit Mega-Preispool
Recent Posts
This website uses cookies to improve your user experience and to provide you with advertisements that are relevant to your interests. By continuing to browse the site you are agreeing to our use of cookies.Ok