Shipping is fun. It’s one of my favourite things about modern media because I’m a hopelessly romantic goblin who gains sustenance from investing myself in potential relationships between fictional characters. When they get together in canon it’s almost euphoric, with the feelings I and so many others have formed around certain pairings finally being validated by the creators. We can emerge from under our bridges and embrace sunlight again, the dark times are over, and our pretend romances mean something.

There’s a beauty in shipping across multiple communities that I’ll need to delve into further at a later date, especially since so many shows and games I cover seem to roam in circles that embrace such things with open arms. But today, I want to talk about a pairing that will likely never see the light of day in canon, and even pitching it to you will raise a bunch of eyebrows as you think I’m weird for even entertaining such a sapphic combination. Hear me out though, I promise it’s perfect.

Ash’s mother and Team Rocket’s Jessie should totally get together. They could be the ultimate duo of anime mommies making the world a better place with their saccharine queer relationship while leaving Mr. Mime out in the cold. It’s perfect, especially when you consider their bond with Ash and divergent character dynamics that would match together so well in a romantic context. Delia Ketchum is caring, soft-spoken, and has a cheeky side she only ever lets surface when appropriate. I can see that element of her character coming alive with a partner like Jessie who enables her occasional bouts of mischief. 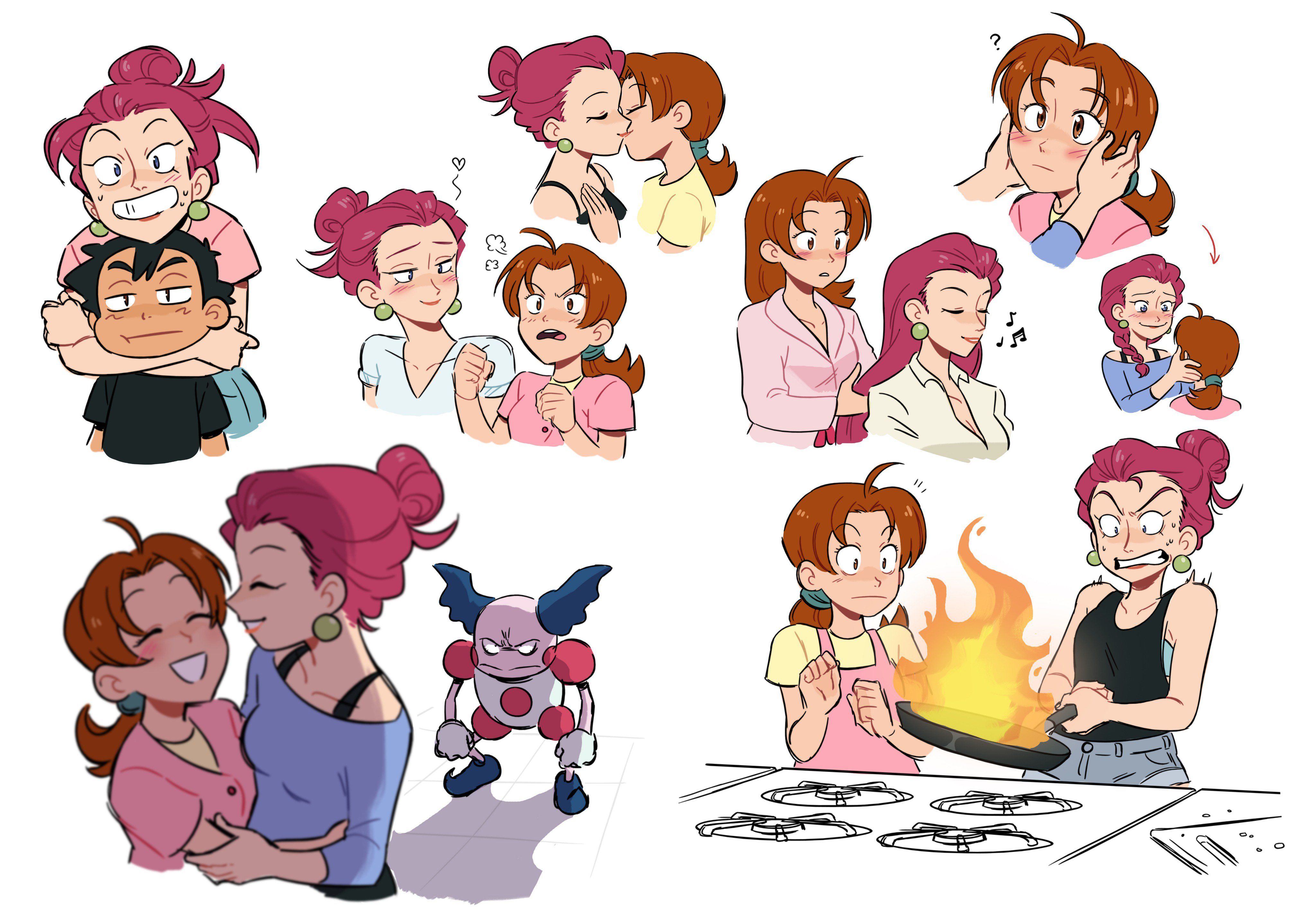 Our protagonist’s dad didn’t leave or die, he was never around because good ol’ Delia is a raging lesbian. Good for her, and she could find a perfect soulmate in Jessie when she retires from constantly trying to kidnap Pikachu to live a domestic life of bliss with her Pallet Town sweetheart. Part of me also loves the headcanon of Jessie suddenly becoming a step-mother to Ash and being a part of his family after making his life a misery for so many years, even though he hasn’t aged a day in the past several decades. A toxic bond could eventually grow into one of unexpected closeness, with Jessie realising that she actually needs to try and form a meaningful bond and does so in order to make Delia feel better about it all. Please someone put a gun to my head before I go any further.

This pairing infected my brain after seeing a bunch of brilliant art from Kiana Mai, a director at Disney Television Animation who posts a lot of Pokemon fanart on their social media that isn’t afraid to pair together characters or envision futures for them far removed from the television anime and films. She’s a tremendously talented artist with a clear love for the series, and seeing that depicted in such a wholesomely queer way and be so well received is amazing. Much like me, she is all aboard the mommy shipping train.

this meme kills me pic.twitter.com/iG5PNBonZR

I am perfectly aware this ship is never going to become a reality and is purely wish fulfilment, but sometimes the best ships are just that – possibilities so unexpected but so brilliant because they work so well when you view them from a certain perspective. Delia Ketchum and Jessie becoming embroiled in a romance is exactly that. They are two women from opposing worlds with personalities that reflect one another beautifully, and the fact they both have existing relationships with so many other characters only makes the entire scenario that much more entertaining.

Ash returning home after a long journey ascending the Pokemon League only to find his mother being smitten with a bitter rival is so sweet, and watching them unpack that misunderstanding and meet on neutral ground is filled with all sorts of delicious drama that will inevitably end in happiness for all involved. Join me in shipping these two characters. I promise you it’s worth it. It’s also gay which is an extra bonus.

Related posts:
05/08/2022 News Comments Off on Ash’s Mum And Jessie Need To Hurry Up And Date Already
Hot News
PlanetScale announces new database analysis and performance features
Destiny 2 Brings Back The Leviathan In Season Of The Haunted
Sony Isn’t Honouring Stacked PS Plus Discounts In Asia
Desinty 2: Season Of The Haunted – everything you need to know
tribulus creatin muskelaufbau
Recent Posts