One of the mysteries that you must solve while playing Assassin’s Creed Valhalla is known as the Standing Stones. Many think this is the hardest of them all as it requires a degree of perfection to solve a puzzle that often leaves players frustrated. It involves using Odin’s Sight to identify the patterns on the stones and then finding the right vantage point for Eivor to look from to create an image.

It sounds simple on paper, but in reality, it takes a steady hand and an ability to see patterns where none exist. You might be stumped, but the Standing Stones in Assassin’s Creed Valhalla are not as hard to solve as they seem! 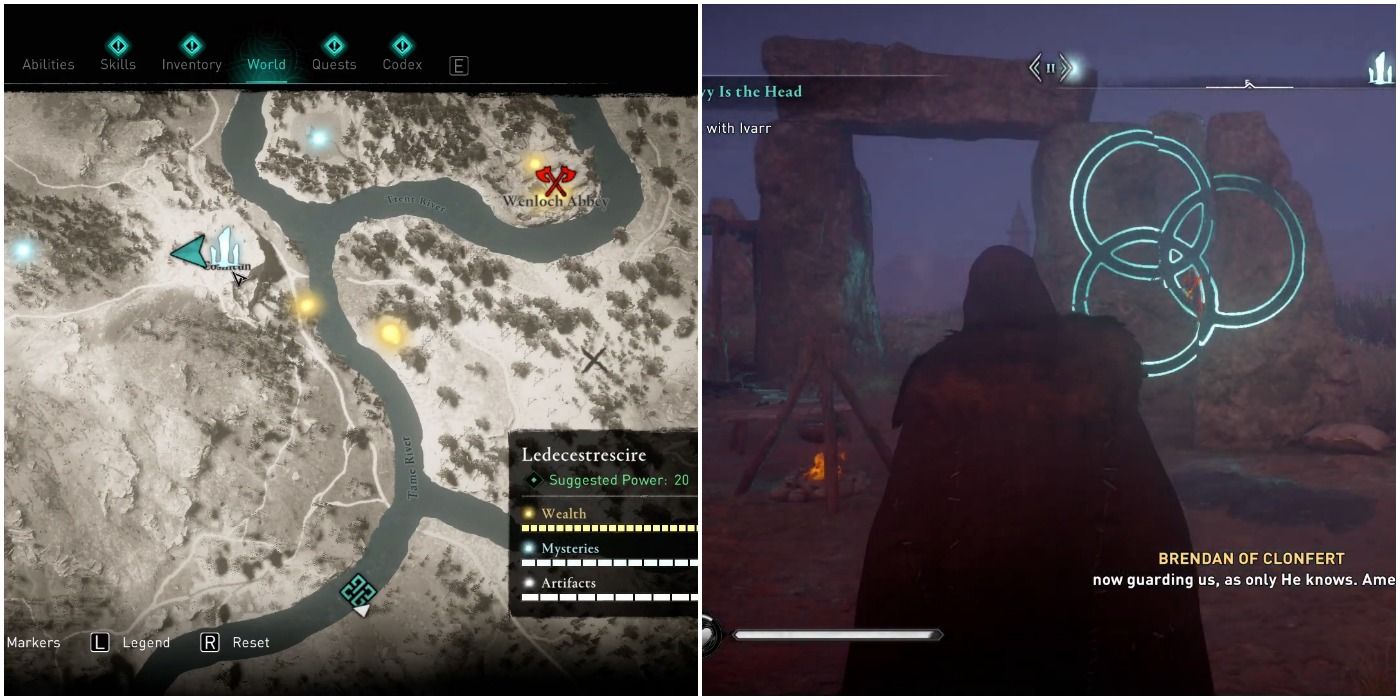 First, you will need to defeat the bandits, so make sure you have an overpowered build prepared before heading to this location. Once they are all dead then stand to the right of the campfire facing the stone archway. 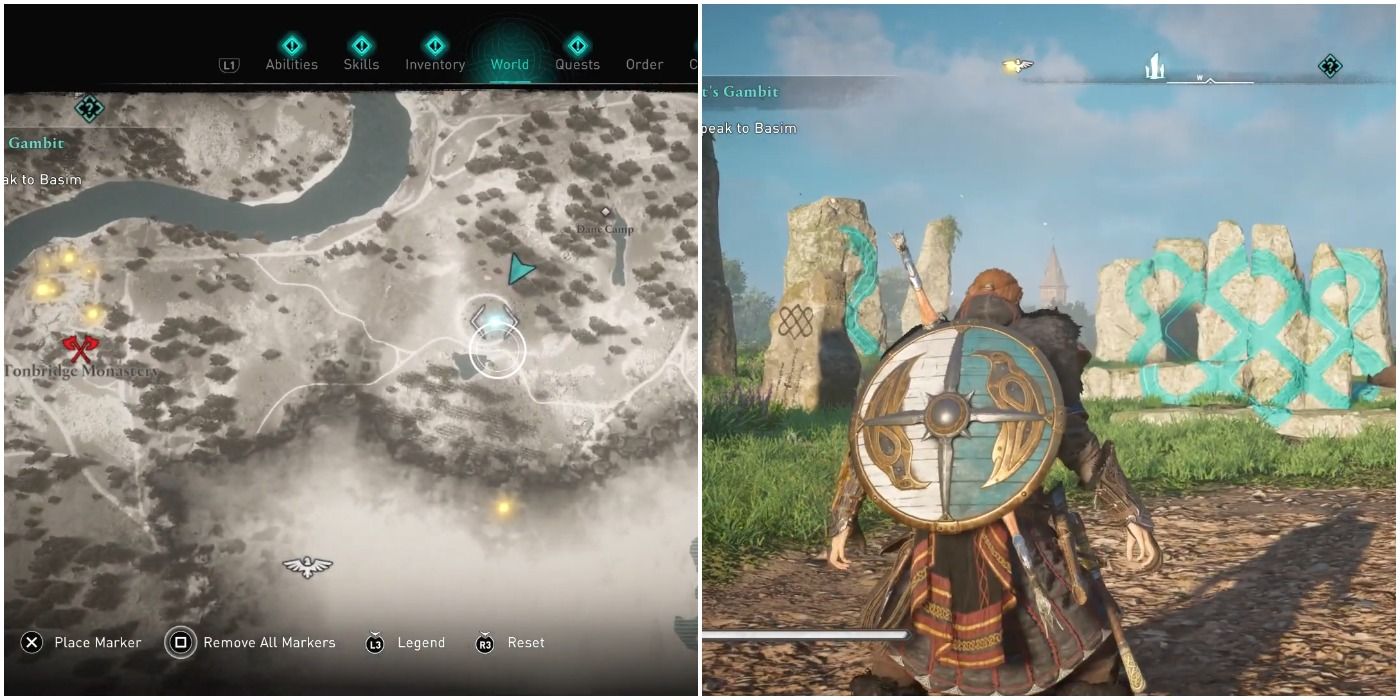 First, you will have to kill the bear that is in the vicinity in order to make solving this puzzle even easier. You can align the pattern by heading to the right of the stone that holds the pattern and walking down the hill a few steps. 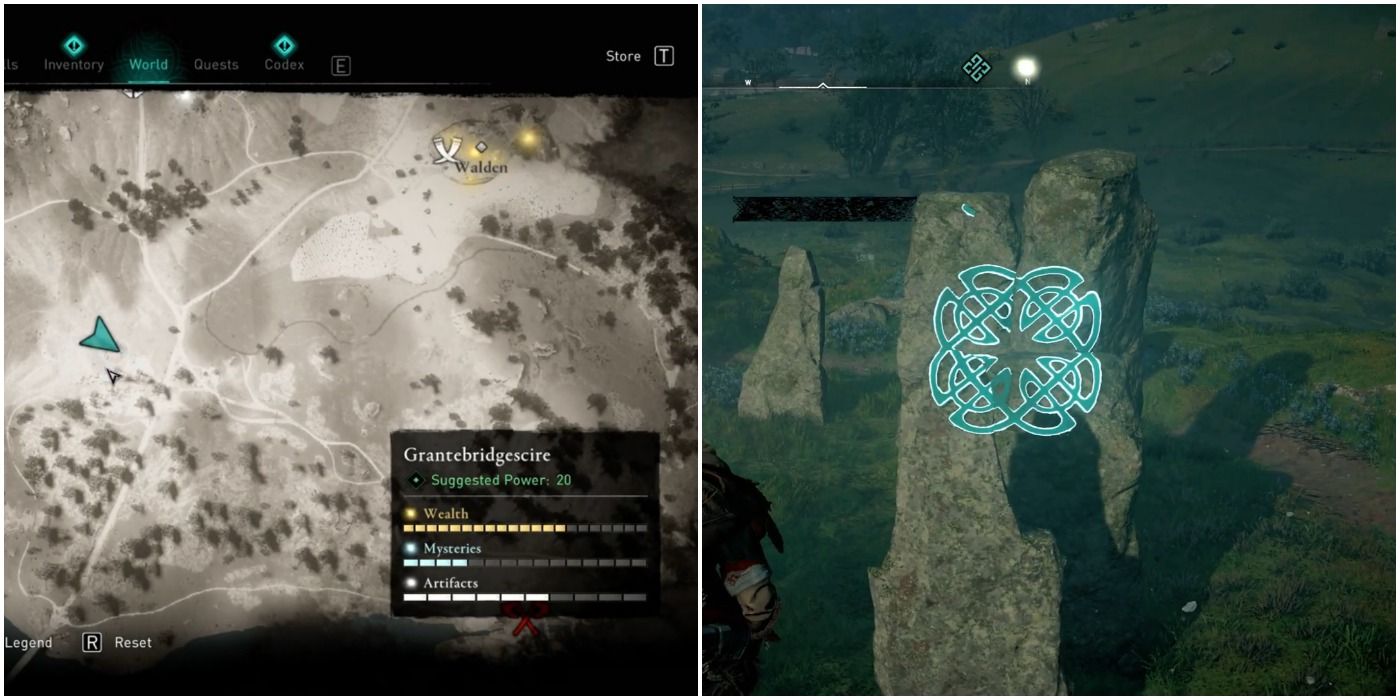 When standing near the rock that shows you the pattern you need to match, look to the left and you will see a boulder and a tree. The end of the tree extends out toward the Standing Stones and by perching on the end of it you can form the necessary pattern. 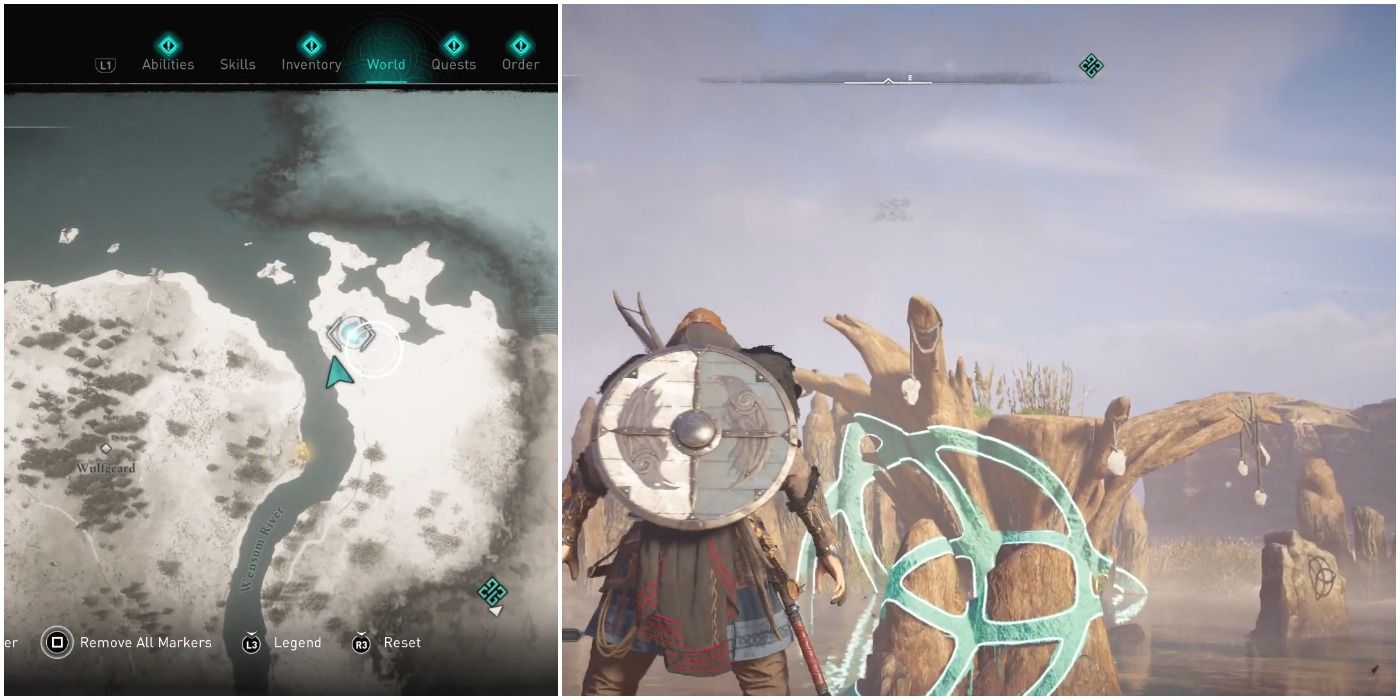 When standing on the outside of the circle of Standing Stones and facing the rock with the pattern, head to the left. There will be a stone with a part of a pattern on its front and when standing in front of this you can align the final design.

It can be tricky, especially for beginners, as part of it is underwater which is something that tends to confuse many players. 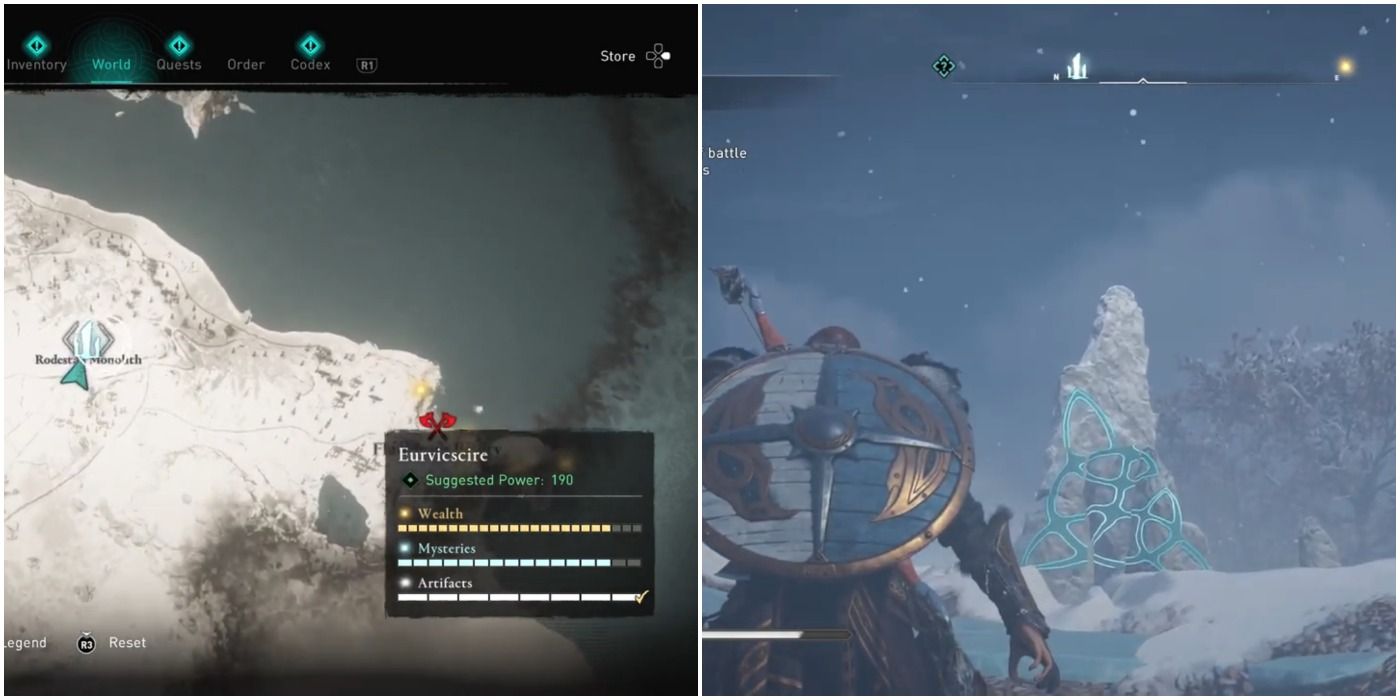 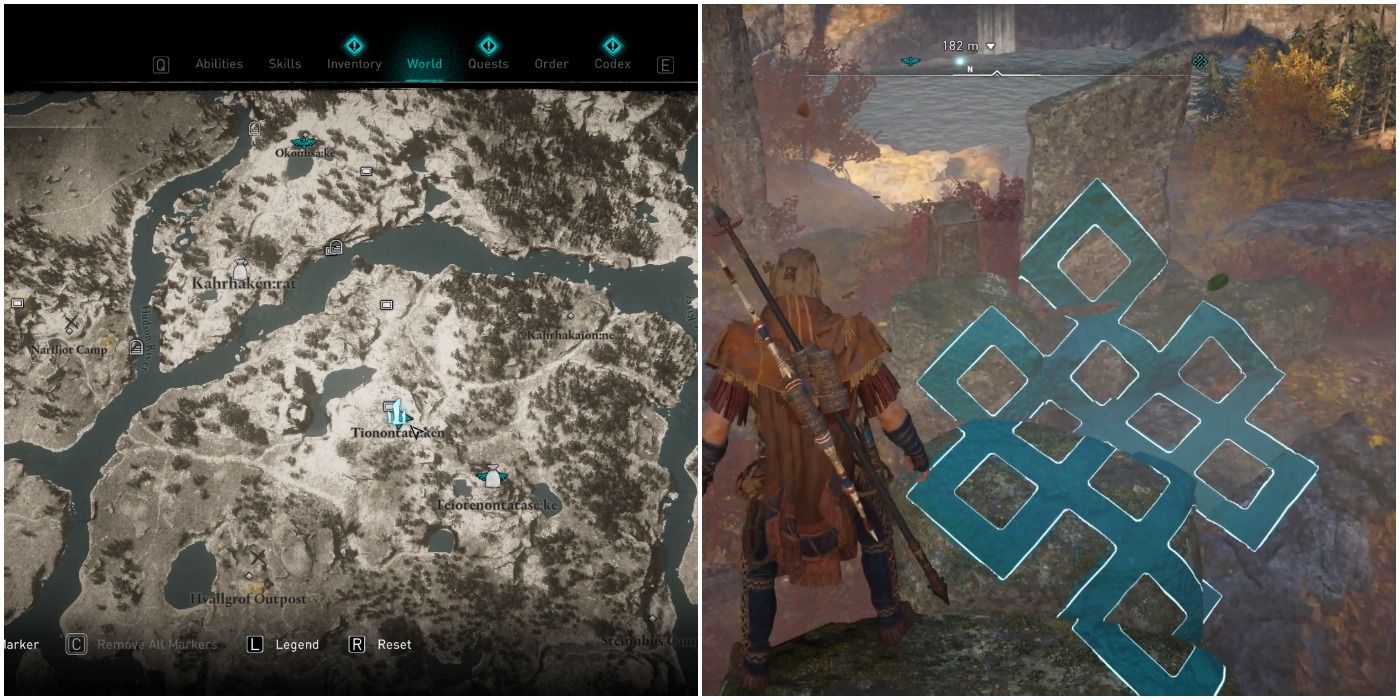 This Standing Stone throws some players for a loop as there are two movable objects in its design, not to mention that Vinland itself is its own beast. If you head to the right of the stone with the pattern then you will find them, and both need to be pushed as far as they can to the left. Once this is done climb the tall stone directly in front of the patterned stone and look to where you pushed the movable objects to complete the design. 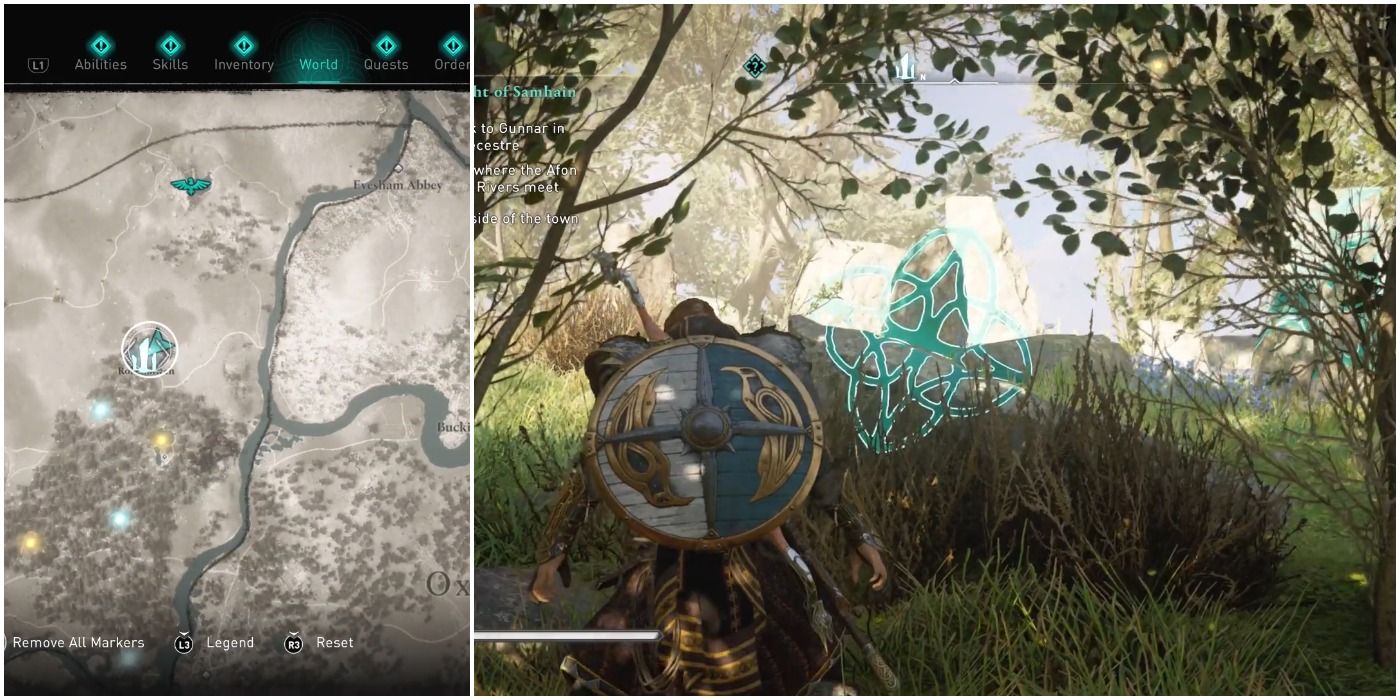 If you are standing in front of the stone that holds the pattern you need to copy, then walk to the right until you reach the stone archway. Next, when looking at the outer edge of the circle near this arch walk three stones to the right, then look back toward the center of the Standing Stones. You will need to align yourself between the two trees and the rocks will form the required pattern. 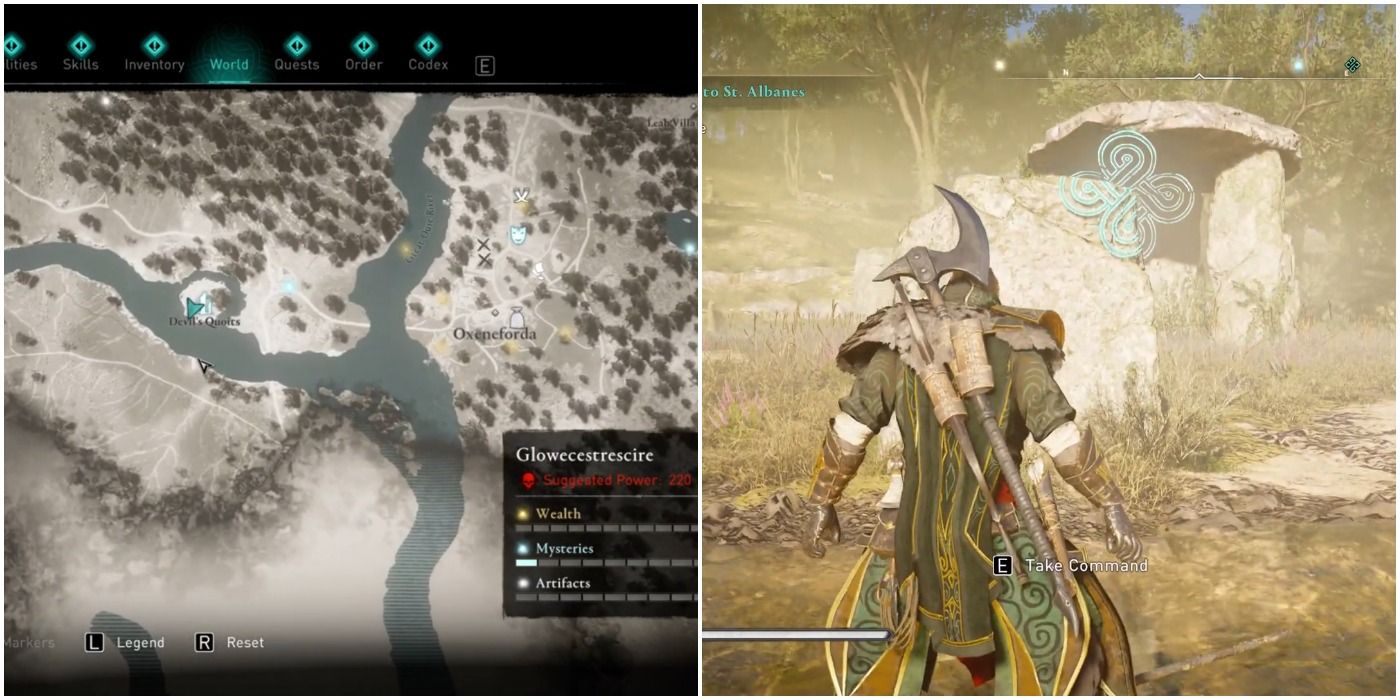 The second Standing Stones mystery in Glowecestrescire is a bit more complex than others in Assassin’s Creed Valhalla. You will want to run toward the river from the stone with the pattern and hop into the boat.

Next, row the boat to the right until you reach the second outer stone and look toward the formation in the center of the standing stones. The boat must be fairly close to shore in order to complete this pattern. 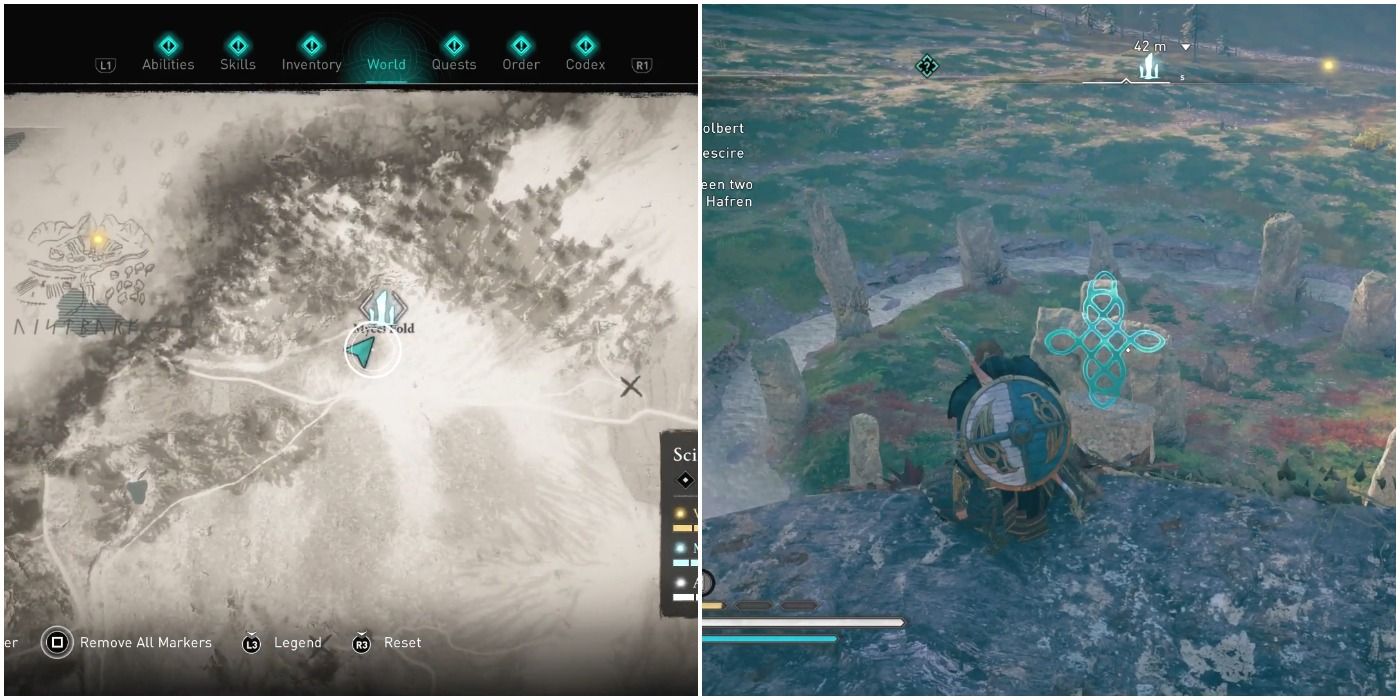 When staring at the stone with the pattern run straight ahead toward the waterfall behind the Standing Stones. You will need to climb the cliff face and reach the rock that extends over the falls directly in line with the middle of the stones below. 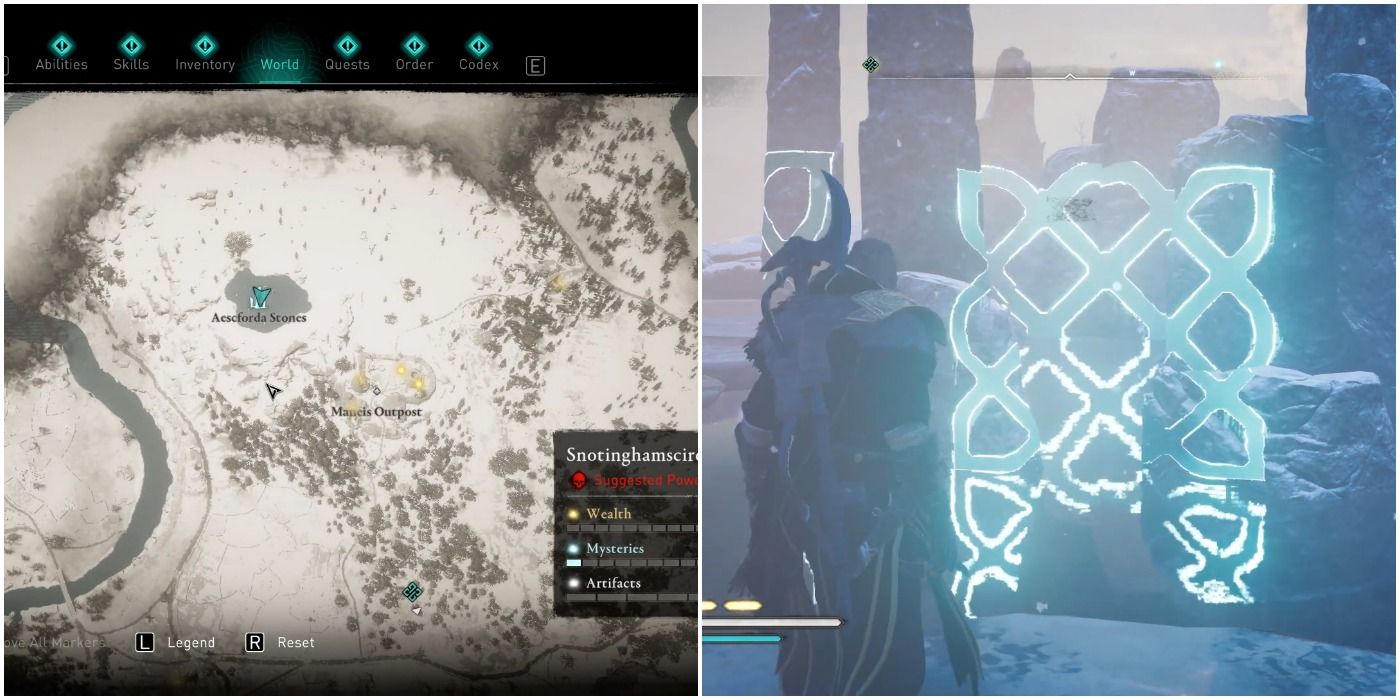 This mystery is located in icy waters and you must jump two platforms to the left of the stone with the pattern. If you look toward the center of the stones then you will see the design that you desire. 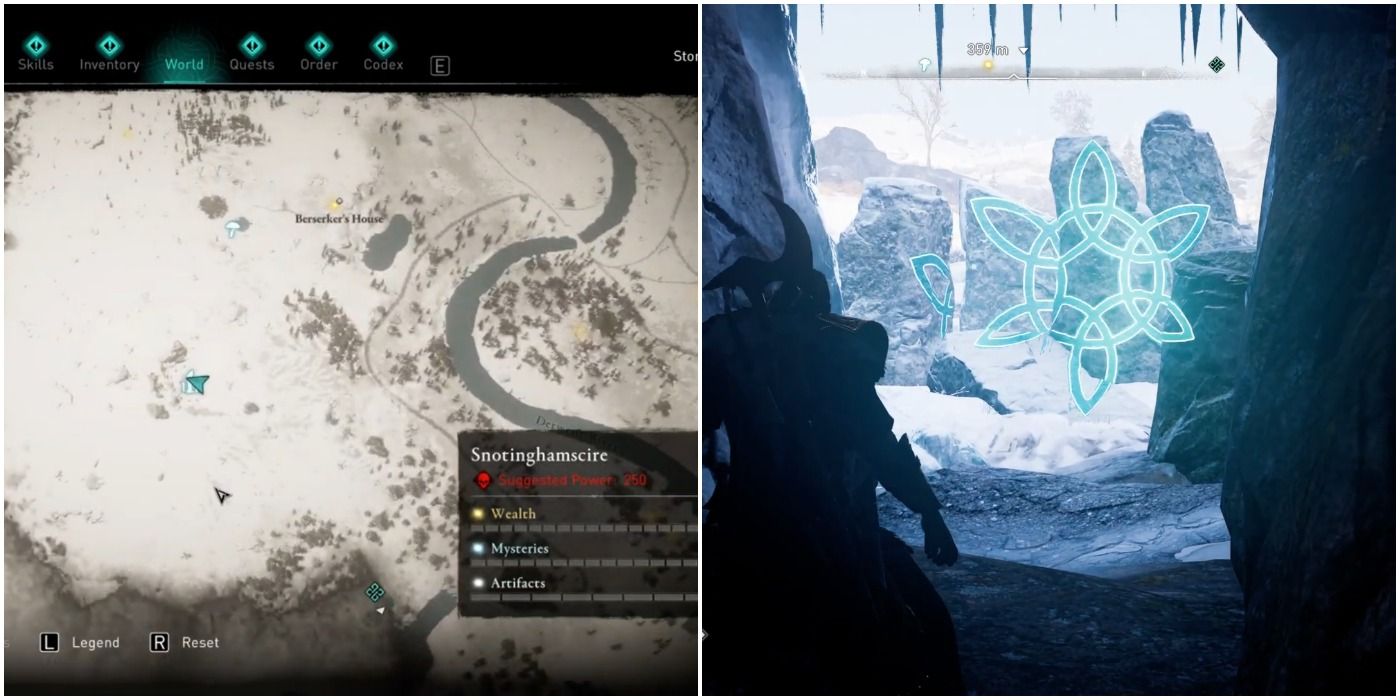 This Standing Stone is located in an icy wonderland, and it plays a part in uncovering the design on the stones. If you head straight toward the cliff face from where you look at the stone with the pattern then you will find a breakable ice wall.

You need to use a weapon or one of your bows to break it down. Finally, stand inside the small cave and look back toward the stones and you will see the pattern. 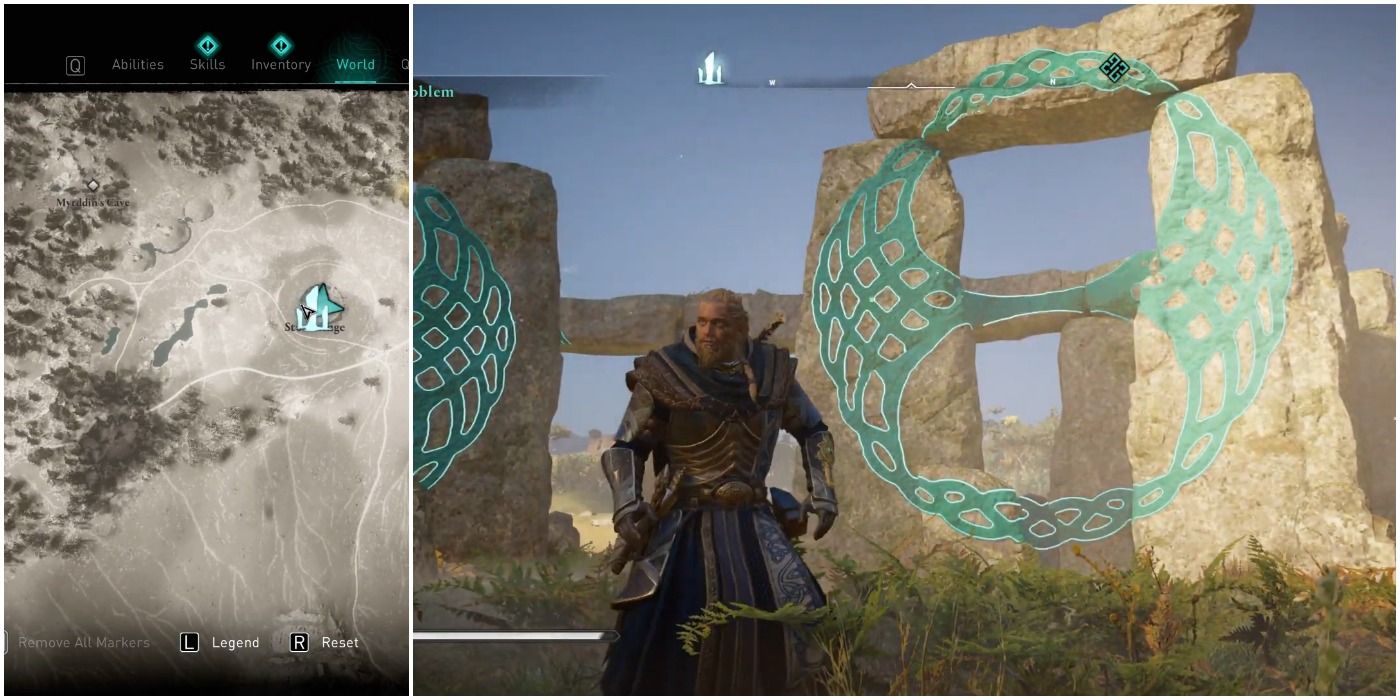 This is near the location of the legendary Excalibur, which you can figure out how to acquire in this guide. There will be three stone formations that each look like they could match the pattern on the stone. If you run to the right then it will be the third formation, but you might have to play around with it a little bit for it to register. 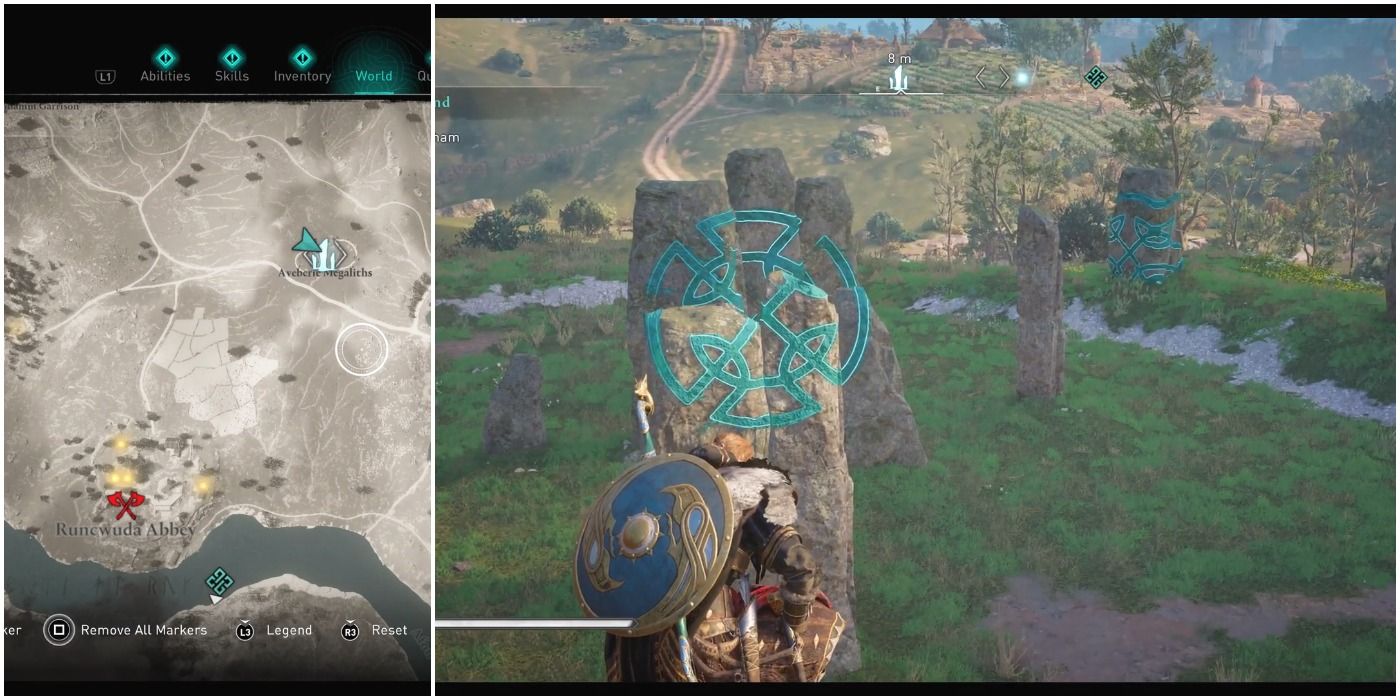 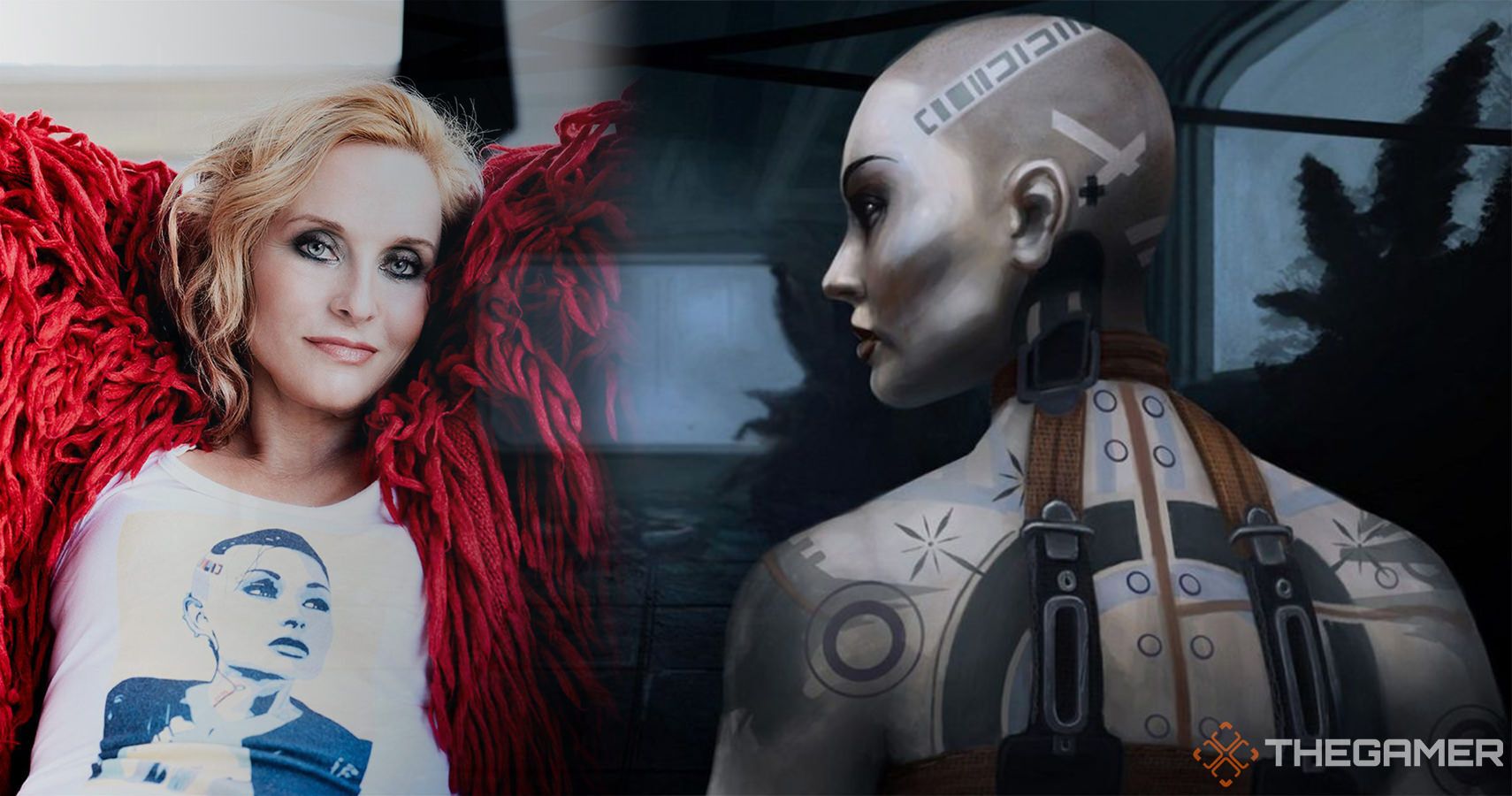