Baldur’s Gate III is following the lead of the Divinity: Original Sin series, debuting on Steam Early Access sometime this year, and it’s also showing off its first chunk of gameplay.

Larian Studios revealed this info (it said in a few months, but nothing’s confirming this yet) during a special press event last week. In it, Larian boss Swen Vinke first showed off an impressive trailer with a Mind Flayer Nautiloid (a flying ship) abducting prisoners while an Illithid on board implanted tadpoles in their heads. Githyanki portal in, riding red dragons, and attack, with the wyrms ripping open holes in the Nautiloid’s hull and breathing fire inside it. The ship portals out, and the Githyanki and dragons give chase, going through the Shadowfell (another plane) and other regions of Faerûn before crashing to the ground.

And that’s when your adventure begins. You’ve been implanted with a Mind Flayer tadpole, and you have seven days to find a way to get rid of it before you transform into one of these insidious Illithids. You find yourself in desperate need, teaming up with other survivors and finding that you all have a special mind link — and powers — thanks to these tadpoles.

Vinke then showed off more than two hours of gameplay, displaying a D&D video game that looks to have more character, combat, and conversation options than any before. And with millions playing and watching folks in actual-play livestreams like Critical Role, having a D&D game with the ambitions to match the play we enjoy on the tabletop is a big bet for Larian and D&D publisher Wizards of the Coast. Divinity: Original Sin sold 1 million copies after 2 months on the market, and it stands to do just as well — if not better — with Baldur’s Gate III.

This is a short rundown of some of my thoughts on what I saw. I’ll have two interviews coming next week.

You can choose from 15 races and eight classes in Baldur’s Gate III. Larian showed off a handful of both. Races include: 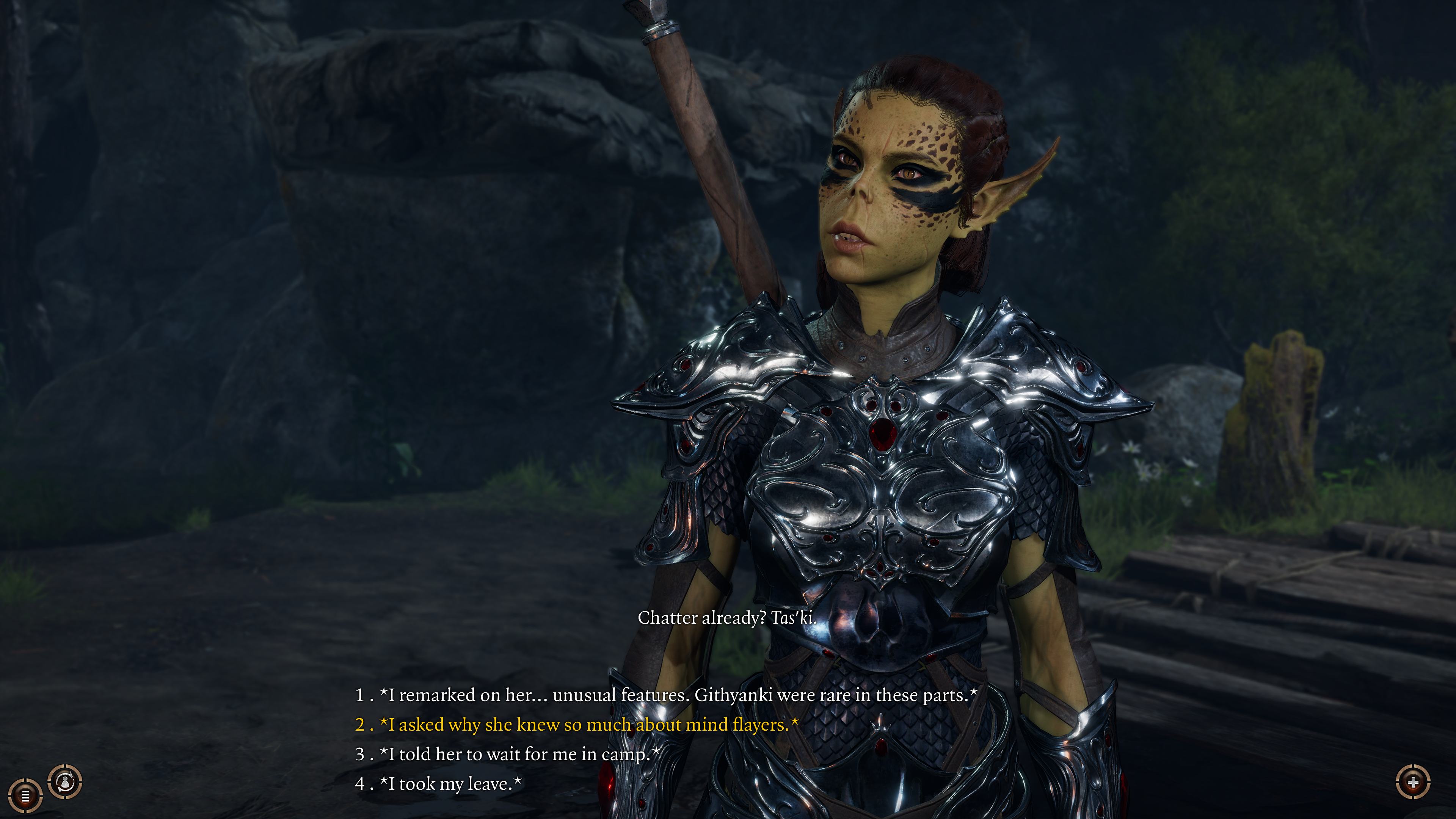 Above: Lae’zel is a Githyanki you can play in Baldur’s Gate III. She appears to be a powerful ally.

As you can see in the trailer Larian released, Githyanki are a character option in Baldur’s Gate III. As far as I can tell, this is the first time this former slave race of the Mind Flayers has been a playable race in a D&D video game. A D&D spokesperson said over email that this “sounds right but I can’t confirm 100%. There have been a lot of D&D computer games.” Wizards of the Coast added the Gith as a playable race in D&D in 2018’s Mordenkainen’s Tome of Foes book. It’s an exciting addition, especially since Githyanki play a role in the narrative.

Right now, the classes Larian told us about are:

Nothing revolutionary here — these are the basic building blocks. I’m hoping we’ll see Barbarian, Bard, Monk, and Ranger, Paladin, and Sorcerer in a future look at Baldur’s Gate III.

Curious as to see how this compares to other D&D games, I looked at the most recent single-player game with lots of character-building options: 2006’s Neverwinter Nights 2, which uses the 3rd Edition D&D rules. At launch, Neverwinter Nights 2 had eight race options and 14 subrace options and 12 classes at launch, but 3rd Edition is a bloated beast.

Vinke showed us the character options, and it became clear there will be plenty to choose from. You could also make your own or play one of the story characters. And one, Astarion, has a fascinating background: He’s a vampire spawn. But thanks to the tadpole … I think … Astarion can bathe in the sunlight. He’s a daywalker again.

But he still hungers. While camping (where you can interact with party members), Vinke had Astarion feed on a fellow party member. He got a bonus the next morning, but his friend had some status debuffs from losing blood. Yes, you can go the hero route, or take a more sinister path.

Your companions have plenty of backstory, but what’s interesting to me is that it feels like even the monsters are treated more as individuals than just baddies. You can have conversations with a number of goblins, and as you do, you learn a bit about their motivations as they serve The Absolute, some being that’s attached to the mystery involving your tadpole mind-link and (at least in this slice of gameplay) rallying goblinoids under its banner. 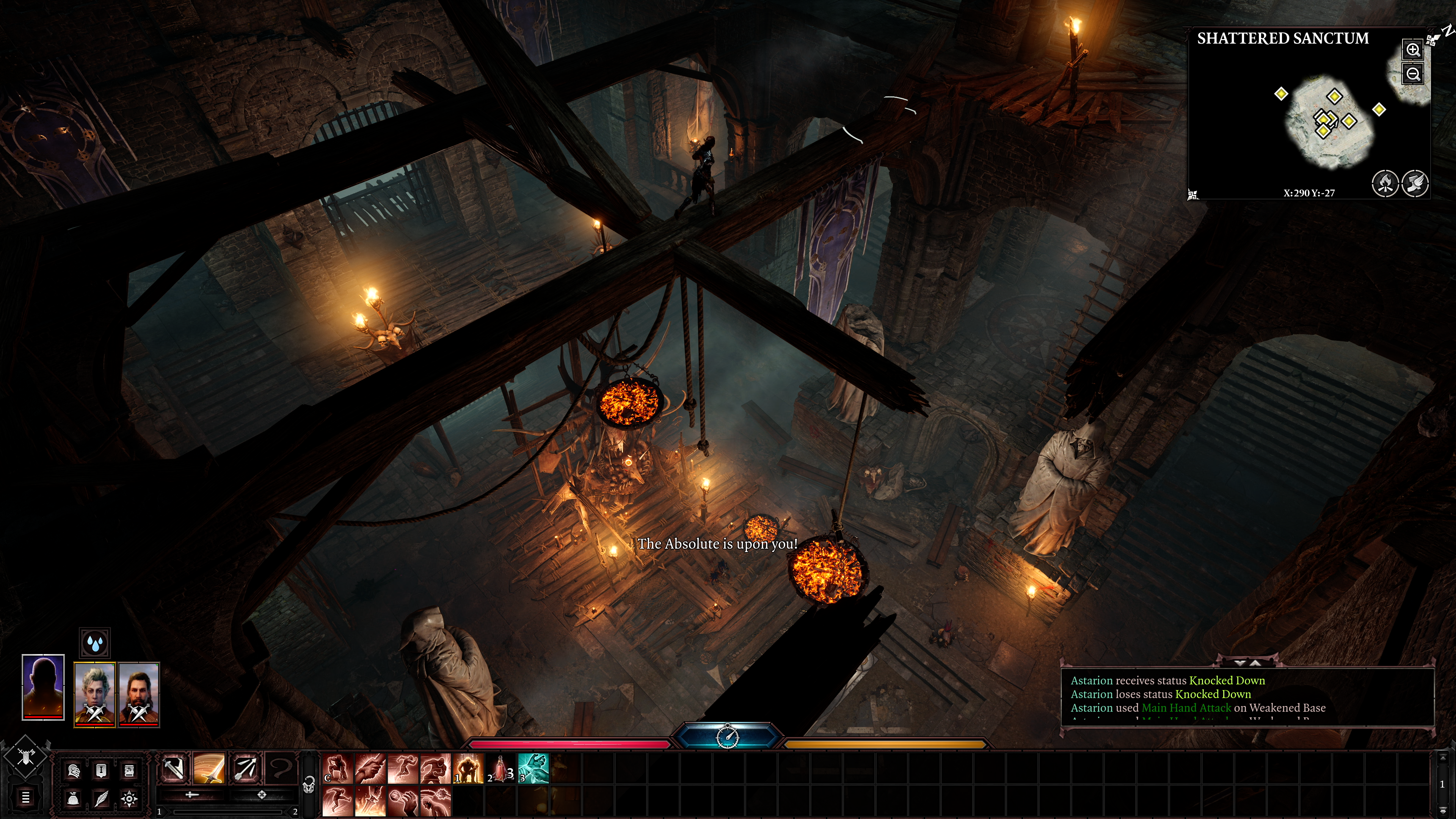 Above: You can climb up to the rafters and fire on foes, gaining an advantage for holding the high ground.

You can see some of the changes the dev team has made to the Divinity engine. Larian’s calling it Divinity 4.0 now, and it does some things that you won’t find in the Divinity: Original Sin games.

First of all, it offers a vertical gameplay element. Your character can jump up and down on terrain, creating encounters in which you enjoy the benefits of the high ground, or helping you sneak around better. It reminds me of Star Trek II: The Wrath of Khan and how Spock points out that Khan’s attack patterns in the nebula indicate just two-dimensional thinking. The Enterprise then dips under the Reliant’s trajectory, lets it pass, and rises out of the clouds, delivering a nigh-fatal blow to Khan’s ship.

Later in the demo, Vinke’s character took to the rafters to fire down arrows and throw barrels of smokepower down on a hobgoblin boss. He was trying to get his characters to push the hobbo into a pit, where a group of giant spiders were waiting to feast on goblinoid flesh. Vinke pushed creatures several times in the demo.

One of the things I like about Divinity: Original Sin is that you can move barrels and crates around. You could do this to create choke points, break barrels to empty their contents and create environmental hazards, block off traps, or sit on pressure plates. By adding a vertical element, you can now stack boxes and such to create stairs to reach rafters, higher levels, or to create high ground for attacks. You can even use the cantrip Mage Hand to move things, making the spell useful for the first time in a video game in my 38-year memory of playing D&D games.

In one sequence, he showed us how to use crates and such to navigate traps. In a tomb, vents oozed grease on the floor, and traps blasted fiery missiles from both sides. Vinke tried to stand on a crate to avoid the small fireballs, but when the flames ignited the grease, he died. He took another character, the mage Gale, and brought him into the room. He used crates to block the grease from filling the room, solving the trap. One handy resurrection scroll later, both 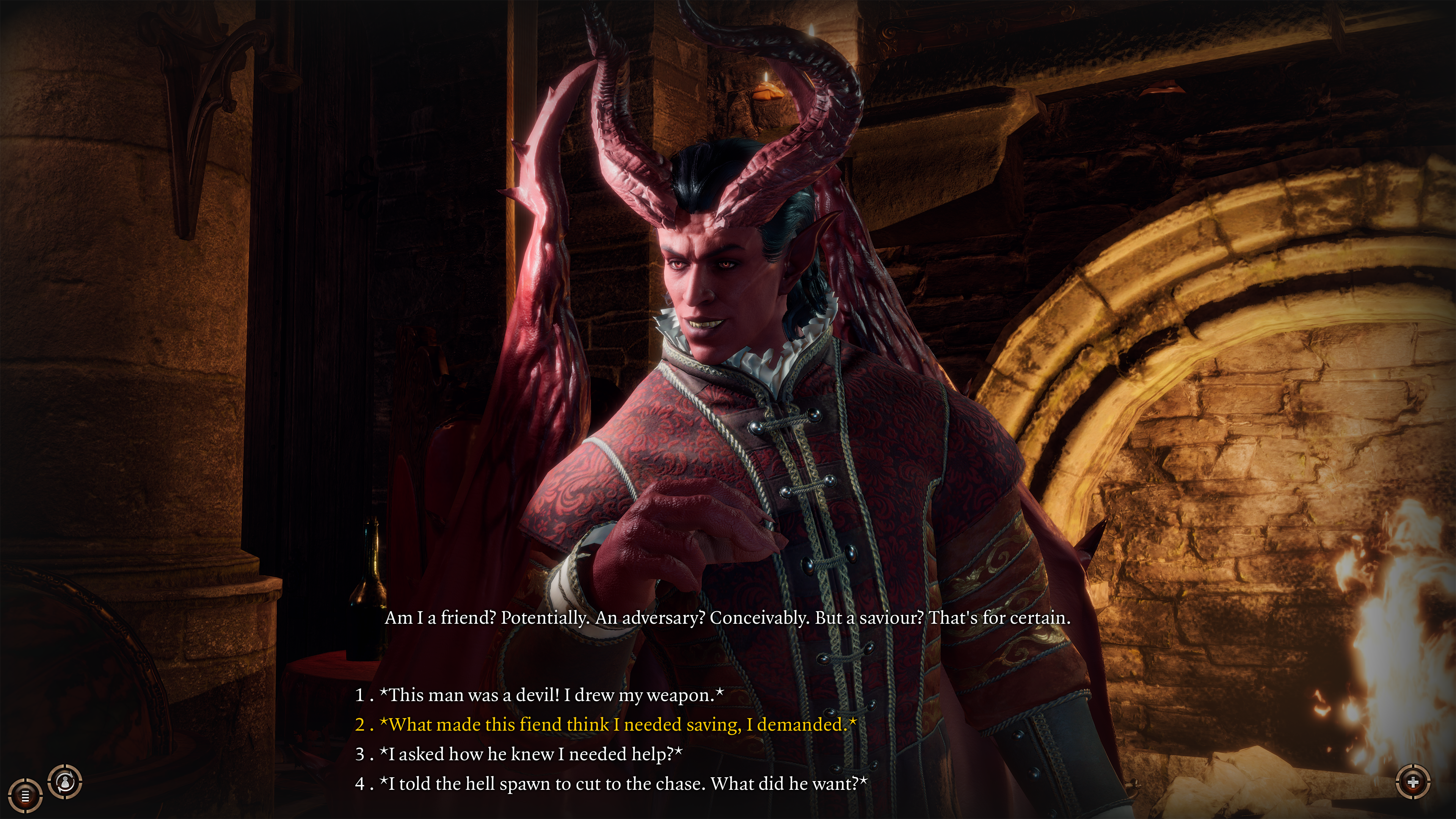 Above: This cambion is trying to get you to make a deal with the devils to get the tadpole out of your head.

When you make a skill check, past D&D games handle the die roll under the hood. Vinke said that Larian wanted to bring the D20 front-and-center, so when you make an active check, the die appears and rolls. Vinke failed a number of checks, with what felt like an inordinate amount of 1s and 2s, but it was fun — and suspenseful — to watch the die spin. My concern here is that this novel feeling will wear off, and the checks will take too long once you’ve been playing for 10 hours or more. I don’t expect this to bother me, but it could annoy others.

What’s cool is that on passive checks, a small D20 symbol appears to show that the check is happening. In the instances I saw it, the die was on a dialogue box. I enjoyed this little touch — it reminds me that, even though I’m playing a video game, it’s still D&D.

Larian hasn’t announced a set date for Steam Early Access. The early gameplay I saw will be part of the debut. Vinke adventured in a druid grove, skipping out on many of the quests, and a ruined chapel. I wouldn’t be surprised if you have more than 20 hours of gameplay here. I got about that from the first batch of EA content with Divinity: Original Sin II, exploring every place and interaction.

As with the Divinity: Original Sin games, Larian will be using the feedback gained from those playing in Early Access to fix bugs, improve game systems, and see what else it has to work on before its later release on PC and Google Stadia.