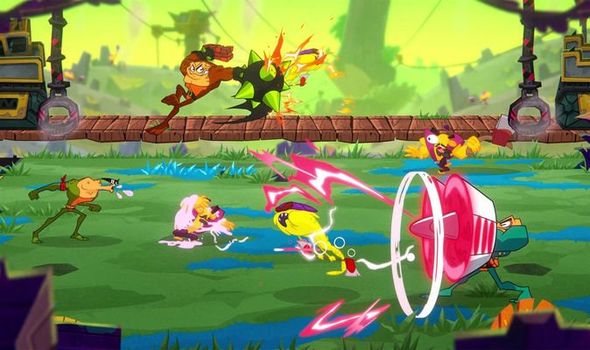 Battletoads is launching this week on Xbox One and PC although gamers are still waiting on word on an official release time. For now, all we know is what day this week gamers will have the chance to try out the return of Rash, Zitz, and Pimple.

WHEN IS BATTLETOADS OUT ON XBOX ONE?

Microsoft has confirmed that the Battletoads release date has been set for Thursday, August 20, 2020.

Battletoads will be available on PC and Xbox One, meaning that plenty of gamers will have a chance to check it out.

No set time has been announced for when Battletoads will be playable, or when the game will be made available on the Microsoft Store.

The good news is that Microsoft has confirmed that Battletoads, like most other Xbox exclusives, will be available to download from the Xbox Game Pass.

“From Xbox Game Studios, available with Xbox Game Pass on day one! The wait is over!” a message from Microsoft explains.

“Rash, Zitz, and Pimple are returning at last to smash-hit their way through an all-new action-packed adventure of choreographed chaos, and couch co-op may never be the same again.

“1-3 players will take control of the Battletoads and team up to storm through wild and unpredictable stages with only one rule – expect the unexpected.

“Teamwork makes the dream work in a drop-in, drop-out gameplay blast, filled with over-the-top gameplay moments that anyone can enjoy, but only a True ‘Toad’ can master. Pre-install now, so you’re ready to play when it drops.

“With a unique hand-animated cartoon style and packed with memorable characters and locations, the Battletoads are back for a larger-than-life brawl across the universe that promises to be fun alone, and unforgettable together.”

Unique features include the following:

Plenty of other games are coming to Xbox Game Pass this week and in the future, including Microsoft Flight Simulator, Spiritfarer, Crossing Souls, Darksiders: Genesis, Don’t Starve: Giant Edition, Wasteland 3, and Crusader Kings 3 in September.

Related posts:
08/18/2020 News Comments Off on Battletoads 2020 release date and launch time latest for Xbox One
Hot News
Zynga poured a lot of magic potion into Harry Potter: Puzzles & Spells
Phil Spencer Says New Xbox Studios Will Run "Semi-Independently" To Maintain Culture
Slash Quest Cuts Into Apple Arcade Library This Fall
Xbox Series X and S pre-orders start again in November, as Xbox One X sales rise
TuSimple expands self-driving trucks to Europe with Traton partnership
Recent Posts
This website uses cookies to improve your user experience and to provide you with advertisements that are relevant to your interests. By continuing to browse the site you are agreeing to our use of cookies.Ok