Back in 1997, Westwood Studios—creator of the legendary Command & Conquer series—launched Blade Runner, a point-and-click adventure based on Ridley Scott's influential 1982 sci-fi movie. This clever, atmospheric detective game was widely critically acclaimed at the time, but soon faded into obscurity. Tricky licensing issues meant it was never re-released, making it essentially out of print—and even if you had a copy you had to wrestle with Windows to get it running properly. These days, however, it's a very different story. The game has been available on GOG since 2019, letting you play it fuss-free on Mac, Linux, and PC. Better yet, as of today you now have even more ways to play it thanks to a new remaster by Nightdive Studios. Westwood's forgotten classic is now playable on PlayStation and Switch, making it more accessible than it's ever been before.

In the Blade Runner game you play as Ray McCoy, an android-hunting LAPD detective who is the complete opposite of Harrison Ford's world-weary Rick Deckard. Deckard was a cynical, washed-up veteran forced out of retirement against his will; McCoy is a relatively fresh-faced rookie who loves his job. Both characters share a love of stylish trench coats, blaster pistols, and dimly lit apartments, but they couldn't be more different. After a store full of animals is slain by a mystery killer, a crime on par with homicide in Blade Runner's dystopian vision of the future, McCoy finds himself hunting down a group of renegade replicants: synthetic humans outlawed on Earth. As a Blade Runner it's McCoy's job to 'retire' them—a euphemism for execution—which is easier said than done when they have superhuman strength and intelligence.

Blade Runner is a point-and-click adventure game in the classic '90s mould, but with a greater focus on detective work. It's more about interviewing witnesses, searching for clues, following leads, and analysing crime scenes than combining random items to solve absurd puzzles. There are no rubber chickens with pulleys inside them here. Occasionally you get to unholster your pistol and chase a fleeing replicant, but for the most part it's a slow-burning, thoughtful game where you spend a lot of time just wandering the rainy, neon-lit streets of Los Angeles. The intentionally languid pace mirrors that of the movie itself, which is just one of countless ways Westwood perfectly captured the look, feel, and sound of the source material. The game has the dreamlike ambience, melancholy tone, and palpable sense of loneliness that makes the film so deeply compelling. 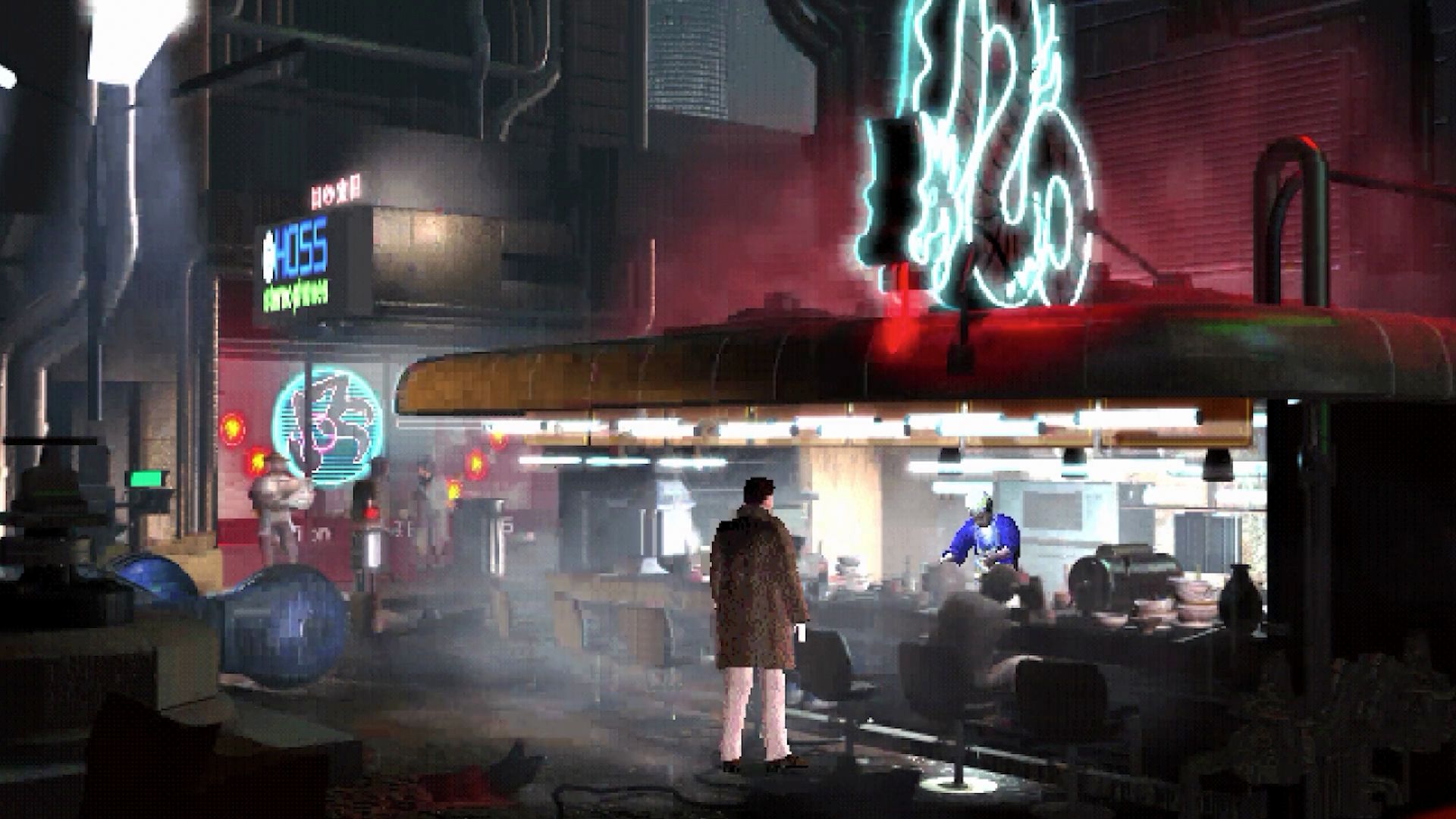 There's also an intriguing dynamic that lends an unpredictable element to the game. There are missable clues, characters who can leave a location before you get the chance to talk to them, and timed, randomised events. It's possible to miss a meeting with Tyrell and Rachael—two major characters from the movie, voiced by original actors Joe Turkel and Sean Young—if you don't talk to someone at a specific time. A video game would never do that today. Incidentally, props to Westwood for reuniting most of the original cast. Brion James (Leon), James Hong (Chew), and William Sanderson (JF Sebastian) all make appearances as their iconic characters. But the coolest feature is how, every time you start a new game, it randomly decides which of the main cast are replicants. There's also some ambiguity about whether, like Deckard, McCoy himself is secretly an android.

The game also lets you get your hands on the movie's scene-stealing future tech, including the ESPER and Voight-Kampff machines. The former lets you move around inside photographs to uncover clues; the latter detects whether someone is a replicant or not through the use of emotion-stirring questions and statements. Both are perfectly recreated, as is Los Angeles itself. Every pre-rendered background is drenched in atmosphere and detail, brought to life with animated details like blinking neon advertising billboards, roaming spotlights, backlit fans (a Ridley Scott classic), and the endless, pounding rain that is so crucial to the film's future noir feel. Throw in Vangelis's beautiful, haunting musical score (expertly recreated by Westwood's in-house composer ​​Frank Klepacki) and you're left with one of the most powerfully atmospheric video games ever made.

So yeah, it's safe to say I'm a huge fan of the Blade Runner game. I've played the PC version maybe 20 times over the years, which made me especially intrigued to see how Nightdive would handle this long-awaited remaster. Playing the Switch version, I was delighted to discover that it's incredibly faithful and largely untouched. The pre-rendered backgrounds have been smoothed out, but the scratchy voxel character models are the same as they've always been. Nightdive could have remade these, but I like them as they are. They're part of the game's distinctive, grimy aesthetic. I personally prefer it when a remaster preserves a game's original art style, and that's very much the case here. It basically looks the same as it did back in '97—which, to be fair, might put off some first time players. It'll be interesting to see how it's received by a new audience.

Nightdive has done a fantastic job mapping this previously PC-only game to a gamepad. It retains the original point-and-click interface, but the cursor moves smoothly with the analogue stick, and I like how it slows down slightly when you pass over an interaction point. The new UI is a bit of a letdown, though. The KIA interface (where you can sort and analyse clues you've discovered) has been nicely tidied up and upscaled, but the menus, subtitles, and dialogue boxes are so basic that they look like temporary placeholders. Just plain text and boxes. The game has such a strong, defined aesthetic that it only highlights how mystifyingly under-designed this aspect of the remake is. I've also encountered some cutscene stutter, audio popping, and minor visual glitches on Switch, but nothing that has actively ruined the experience. This stuff might get patched.

I get that some people might have expected more from this remaster. Enhanced audio, updated 3D models, or a shiny new UI perhaps. It's certainly not on the level of Nightdive's incredible Quake remaster. But I don't mind that it's barebones, because I think people should experience Blade Runner as it was. The important thing about this re-release is that the game is now easily playable on platforms other than a computer. It means more people get to play it, on a TV or a handheld, which alone is worth celebrating. I've been playing it on my Switch OLED in undocked mode and it looks and feels great. For years Blade Runner has been a cult classic, but now it can just be a classic. It's taken far too long to get to this point, but I'm glad we made it in the end. Westwood Studios may be long gone, like tears in rain, 'retired' by EA, but this is a fitting tribute to its legacy.