Where does your enterprise stand on the AI adoption curve? Take our AI survey to find out.

Checkly, an active monitoring platform for APIs and web apps, today announced that it closed a $10 million series A funding round led by CRV with participation from Accel, Mango Capital, and Guillermo Rauch. The capital, which brings the company’s total raised to $12.25 million, will be used to expand Checkly’s engineering team and build out its platform, according to CEO Hannes Lenke.

Knowing if web apps and APIs are working continuously is critical for businesses, particularly in light of the pandemic. Over the past year, consumer have migrated to online channels, and companies have responded. According to a McKinsey survey, organizations have accelerated the digitization of customer interactions by three to four years. But while active monitoring, which simulates user behavior, can help ensure consistent customer experiences, Lenke asserts that existing solutions (e.g., Pingdom and Runscope) can be cumbersome to implement.

By contrast, Berlin, Germany-based Checkly, which was founded in 2018, is ostensibly programmable and flexible. Via a JavaScript-powered frontend, developers can use it to perform active monitoring tests across more than 20 datacenter locations.

Checkly is the brainchild of Tim Nolet, who previously worked as head of IT for Unu, an electrical scooter startup headquartered in Berlin. Unu’s developers needed to monitor APIs and end-user flows, but Nolet couldn’t find a solution that integrated with the rest of the company’s DevOps environment. Nolet decided to develop his own solution as a bootstrapped side project, and at the same time, he got to know Lenke, the former Sauce Labs general manager. Nolet and Lenke decided to join forces and bring Timo Euteneuer on board, with whom Lenke founded his first startup, TestObject, which Sauce Labs acquired in 2016.

“In general, users worldwide use our solution to find bugs early in the development pipeline and identify and resolve issues in production as fast as possible,” Lenke told VentureBeat via email. “With Checkly, users can test and monitor their APIs and web apps performance, correctness, and uptime. In consequence, Checkly makes sure that web apps are working all the time, everywhere, enabling a flawless user experience.”

“These modern frameworks are widely adopted and are gaining more and more traction … because of their speed and ease of use,” Lenke said. “Our infrastructure is based on AWS Lambda and allows users to execute JavaScript-based API checks and browser checks.”

Checkly’s platform lets developers create monitoring setups as code and run them along their development cycles. It can validate site transactions via an editor developers can use to configure HTTP requests and get global latency metrics by running checks from different datacenters. In addition, Checkly can trigger alerts and reminders and facilitate collaboration with team-based access controls and environments.

To date, Checkly, which employs 13 people, says it’s run over 1 billion API and web app checks, 50% of them in the past six months. The solution is currently used by over 300 customers and “thousands” of developers, including Vercel, 1Password, and Schwarz Group. 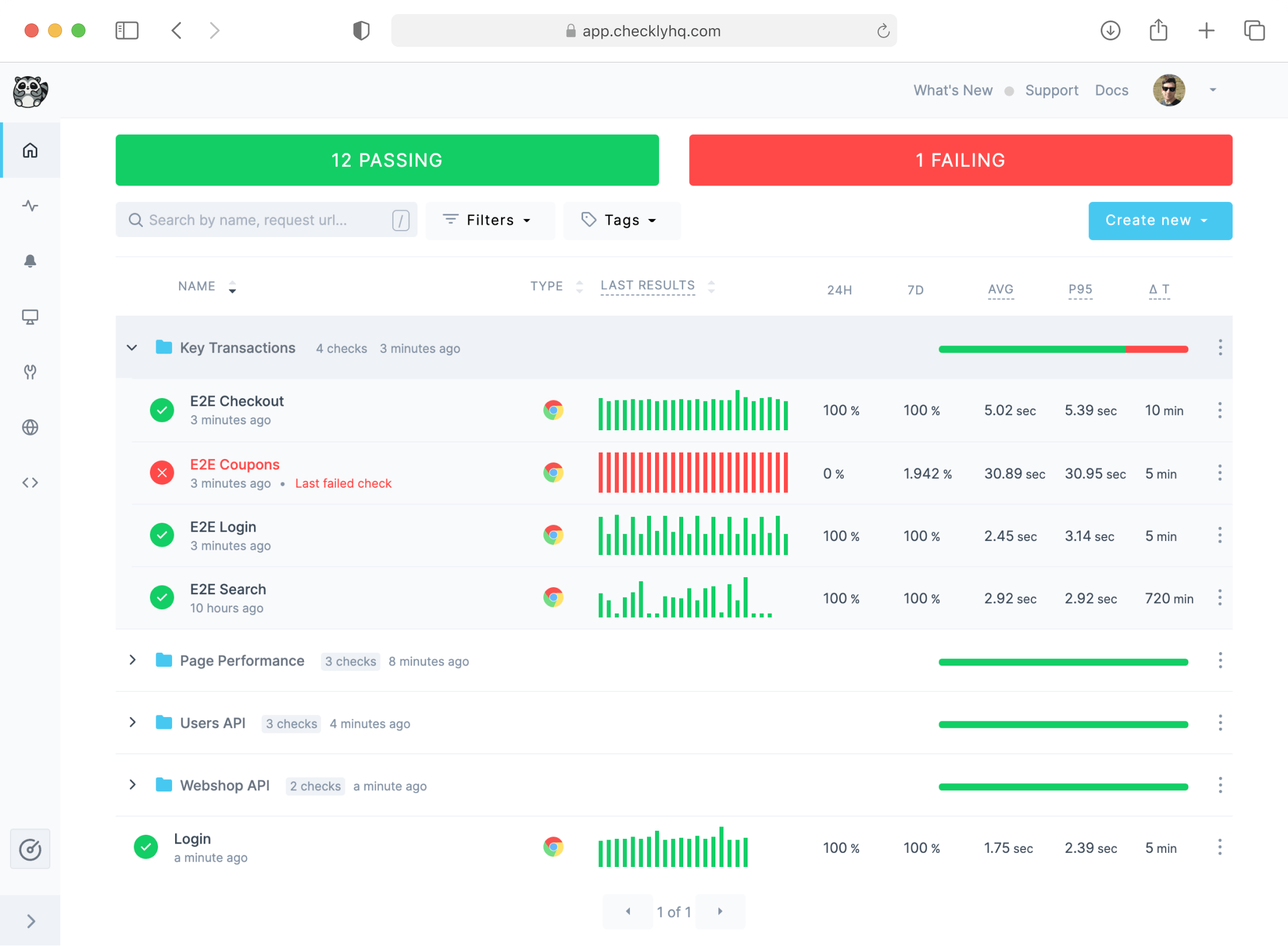 Car subscription startup Finn.Auto, another Checkly customer, taps Checkly to run API and frontend tests every minute on production systems. Finn.Auto CTO Andreas Wixler says that the company saw a “significant” reduction in user-reported bugs with Checkly. “We monitor our … projects on preview and production to catch issues earlier, and we can trust that we are the first ones to know about problems in production,” Wixler said in a statement. “A nice side effect is that we could replace three different solutions for testing, monitoring, and alerting with Checkly.”

With the new funding, Lenke says that Checkly will add “extensive” debugging and drill-down metrics to API- and Playwright/Puppeteer-based browser checks to give better performance visibility across digital channels. Specifically, the company will make it easier to write, debug, and run scripts for monitoring and testing and launch Rich Browser Checks, a feature that will gather all browser metrics, screenshots, logs, and performance stats over time to automatically detect when something goes wrong.

“Clearly the consequences of the pandemic had an impact on Checkly. In some ways, it challenged us, wherein in other areas, it may have also helped the growth of Checkly,” Lenke continued. “On the business side, we believe it may have helped us. The pandemic pushed the digital transformation to a new level in all areas. Companies around the globe are investing in their online presence and offerings, and all these platforms need to be developed, tested, and monitored.”

Related posts:
06/30/2021 News Comments Off on Checkly secures $10M for continuous API and web app testing
Hot News
Synth Riders PSVR First Look Ahead Of Aug. 10 Release
best dosage of gabapentin for fibromyalgia
Why I think OutRun is the perfect summer video game – Reader's Feature
Invisibly wants to pay you for your data
Pokémon Unite feels a little too ‘pay to win’ for some players
Recent Posts