The most surprising announcement at the PC Gaming Show was that Citizen Sleeper is getting DLC, and the fact that solo developer Gareth Damian Martin has published a full roadmap for three new episodes to the narrative science fiction game.

It wasn’t surprising because it’s somehow undeserving of DLC – quite the opposite – but because games of this genre, with teams of this size, generally don’t get updates post-launch. Especially not free ones. So I’m taking this opportunity to remind you to play Citizen Sleeper, the only game I’ve ever given a five-star review to, and a serious contender for my Game of the Year. I know we’re only in June, but it’s already high on my list and would take something truly special to change that.

Martin views himself as more of a Dungeon Master than a developer, at least for Citizen Sleeper. Its TTRPG inspirations are incredibly apparent as you play, and that looks to be expanding with the DLC. The new episodes are one story set on the Eye, the first of which will be available in July, and they look to forge ahead in the same vein as the main game. Martin makes it clear that the DLC can be played alongside the main game or after it, so wherever you are in your adventure, you can hop in and enjoy an additional story in this beautifully-realised world. 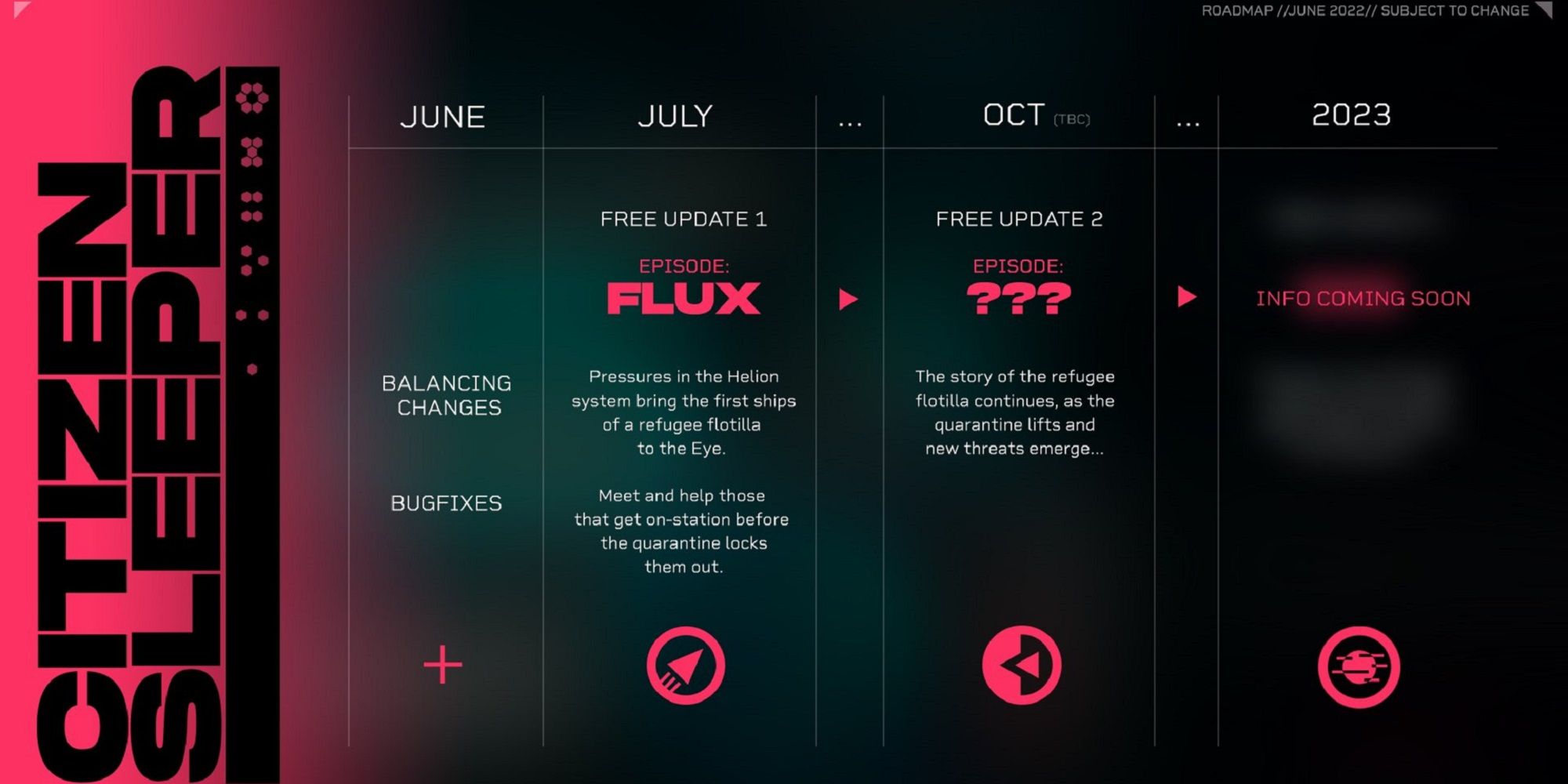 There are new drives and activities that follow a flotilla of refugees arriving to the Eye, but I’m most excited for the new characters. Ankhita’s story was particularly affecting for me, but the likes of Feng, Sabine, and even NeoVend made the Eye come alive, and the narrative wouldn’t be the same without any of them. From Emphis to Riko, I spent as long chatting with every character as I could, replaying it multiple times to complete different characters’ storylines and get different endings. Something as innocuous as mushroom soup can be a route to learning a character’s deepest secrets, so I can’t wait to get to know the people seeking refuge in the shitty, dilapidated streets of the Eye. We’re all trying to make the best of a bad situation here, but that can make things unpredictable. I know I’ll help where I can, but others may not be so kind, especially if there’s more competition for work or suspicions surrounding the newcomers.

Martin says that he wants “the worldbuilding to feel ‘live’, growing before your eyes,” and introducing such a big event to the Eye is undoubtedly the best way of adapting the setting to tell new stories. Will we see what old characters think of the flotilla, or will we explore new, previously uncharted, areas of the space station? We’re veterans of the Eye now but we arrived much like these refugees, relying on the kindness of others to survive.

Think of this as a new TTRPG campaign in a familiar setting, explains Martin. That’s exactly what I want from Citizen Sleeper DLC. The stories told in the main game have been told, the characters’ goals have been resolved (for better or for worse) and your decisions have been made. Reopening old wounds would feel wrong and would do the existing stories a disservice, but introducing new aspects to the Eye feels fitting.

A flotilla of refugees arriving on the Eye is not just a neat narrative ploy to add outside forces and more content to the game, however. Citizen Sleeper has never shied away from mimicking, parodying, and commenting on real-world issues – often those stemming from the corruption of capitalism – so why should the DLC differ? I don’t doubt Citizen Sleeper will tackle these stories with grace and depth, and I can’t wait to spend more time in its world. You should be excited, too.

Related posts:
06/20/2022 News Comments Off on Citizen Sleeper’s DLC Is Another Excuse For Me To Tell You To Play This Game
Hot News
walkers pharmacies
Skull & Bones Will Reportedly Be Re-Revealed Next Month
Source Of Madness: How To Play As A Generalist
Report: 66% of AI decision-makers are concerned about meeting ethical business goals
c acyclovir
Recent Posts