Long-time tabletop roleplaying gamer Greg Lambert recently launched their first Kickstarter campaign to help fund The Chronicles of Aeres, a classical fantasy setting sourcebook for the fifth edition of the world’s most popular tabletop roleplaying game. The project’s goal is set at $4,500, and with 26 days remaining as of this writing, is already about halfway there.

According to the project’s notes, this project will hopefully fund the creation of a printed hardcover edition of the sourcebook, as well as including more full-color art with it. Once the first print run is complete, print-on-demand and digital versions will be made available on DriveThruRPG.

The Chronicles of Aeres sourcebook is inspired by and steeped in the classical age of fantasy, “an age of larger-than-life heroes”, and from an earlier time of hobbits, wizards, prophecies, and treasure hordes lured adventurous readers and players into their immutable stories. Aeres’ young world is still filled with wonder and enchantment, myths and legends, when fairytales roam freely. However, Aeres is also “a realm thrust into the clutches of darkness one time too many”, and has gained its share of “ruthless and wicked sorcerers, tyrannical emperors, and unfathomable intruders” over the centuries.

The Aeres sourcebook will feature over 160 pages of full-color content for the fantasy setting, including 18 races and cultures, and three new mythology-based player classes (Alchemist, Dreamcaller, and Witch). The sourcebook will also provide a selection of new gods, history, lore, pre-written scenarios, and “a complete gazetteer and a full roster of NPCs, monsters, heroes, villains, and organizations”. 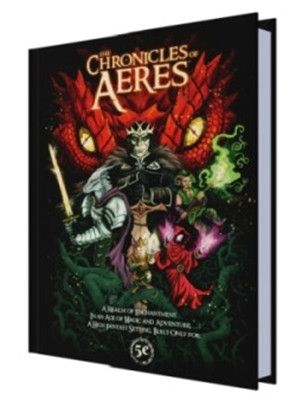 Seven reward tiers are available here, from as low as $3 up to $90 (or more), and will earn you print and PDF versions of the sourcebook, your name listed in the book’s credits, an 11” x 17” Aeres world map, a 36” x 24” movie poster of the book’s cover art or world map, and “an unpainted 3D-printed miniature of Ferric Willow-Whisker”, the setting’s ratfolk rogue mascot. Two stretch goals include a full-length PDF adventure module, along with expanding the setting content, including “a sword & sorcery inspired micro-setting on a mysterious adventure-filled island”, and possibly even allowing Lambert to be present at DragonCon 2021, if that event is held this year.

The Kickstarter page has all the details, of course, as does The Chronicles of Aeres Twitter channel. There’s also an excellent Aeres Explained video (embedded above) that has Lambert narrating a deep dive into the history and lore of Aeres.

Related posts:
01/05/2021 News Comments Off on Classical Fantasy TRPG The Chronicles Of Aeres Launches On Kickstarter
Hot News
buy prevacid overnight shipping no prescription
Frogwares Reveals More Details About Upcoming Sherlock Holmes Game In New Video
Destiny 2: A Complete Guide To Spider’s Wanted Bounties
Resident Evil – erster Trailer für Multiplayer-Shooter Re:Verse veröffentlicht
Vicarious Visions Has Been Merged Into Blizzard
Recent Posts
This website uses cookies to improve your user experience and to provide you with advertisements that are relevant to your interests. By continuing to browse the site you are agreeing to our use of cookies.Ok