Whether you’re new to Critical Role and want to catch up on episodes quickly or are a fan and want to speedily rewatch the second campaign to relive some good memories, this guide will walk you through how to quickly catch up on campaign 2.

If you’re new to Critical Role and want to try watching campaign 2, catching up on 99 episodes (as of this article’s posting) with anywhere from 3-5 hours per episode can sound pretty daunting and time-consuming. It can be a huge barrier to starting a show where catching up seems like an uphill battle due to the sheer enormity of content that is produced every week and has been for the past two years. Even if you’ve seen most of the episodes and missed a couple here or there, you could be missing a few key details that could be referenced later on. Or if you are caught up with Critical Role, it can be hard to recall a lot of what happened one or two years ago in the storyline, and you’d like a reminder of what happened without having to rewatch hours of footage.

Here are a few ways you can get a gist for the story so far without having to spend hours and hours trying to catch up:

Dani Carr, Production Coordinator at Critical Role, began making short recap videos for every episode in campaign 2 of the show. The videos, dubbed “Critical Recap” featured a brief plot synopsis of each episode as well as a “Dani Flips Out” moment where she would list her theories about what the next episode would entail and various questions posed by the episode. Beginning in January 2020 with episode 90, no more videos were posted, and instead now “Critical Recap” exists in written post form on Critical Role‘s website.

Regardless of the form of the recap, Dani does an amazing job being as thorough and brief as possible, and by watching and reading all of these recap videos and posts, you will have a solid grasp of the storyline of Critical Role‘s second campaign- enough so you can follow the live episodes once you do catch up.

If you prefer something more in-depth (for instance, character reactions and interactions, specific rolls that were made, etc.) while still getting a quick recap of some episodes, “CritRoleStats” has what you’re looking for. Operated by fans of the show, known affectionately as Critters, this group records statistics such as dice rolls, number of times spells were cast, an in-game calendar, and even more, but they are also known for their live-Tweeting of every episode. While Dani recaps the episode after the fact, CritRoleStats posts an abbreviated play-by-play of the episode as its happening on Twitter. Briefly, at the beginning of the campaign and for more recent episodes, they have been collecting all the Tweets and posting them according to episode on their website, but so far they have only done this for episodes 1-2, 95-99 of campaign 2. They most likely will continue to post these compilations for easy-reading in the future as well. Reading through each of these pages as well as other resources the website has to offer will give you a more in-depth view of what has happened in the second campaign, from a Critter’s point of view. 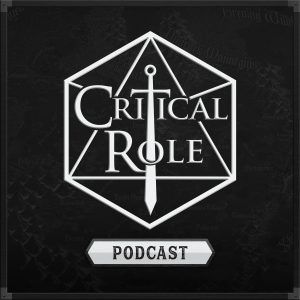 Ah yes, the good old-fashioned binge watch. Binge-watching or listening to the campaign is also an option for catching up with the show without having to miss any of the details. For those of you who find themselves with free time while commuting to work, cleaning, recovering from an illness, or any other situation where you can multitask, Critical Role campaign 2 is offered in podcast form. If you prefer to have visuals as well, all previous episodes of campaign 2 are available on Critical Role’s YouTube channel. Crank the speed up to 1.25x, 1.50x, 1.75x, or even 2x if you’re feeling spicy, and you’ll be speeding through the episodes in no time! As someone who has caught up to Critical Role by doubling the speed of the YouTube videos, I can say this is entirely possible (albeit I only had to catch up on 20 episodes).

Once you’re all caught up (congratulations!), you can watch live episodes of Critical Role on Thursdays at 7pm PST on their Twitch channel when they start up again.