Dishonored is a great series, one that's instantly identified by its distinctive art style and in-depth worldbuilding. It feels alive, like the world exists around you, rather than just for you. Worlds that are as detailed as this make for a playground rife with tools for you to mess with.

Though the void powers of Dishonored are likely what first comes to mind when you think of the game, the many tools and gadgets of the world are just as notable. 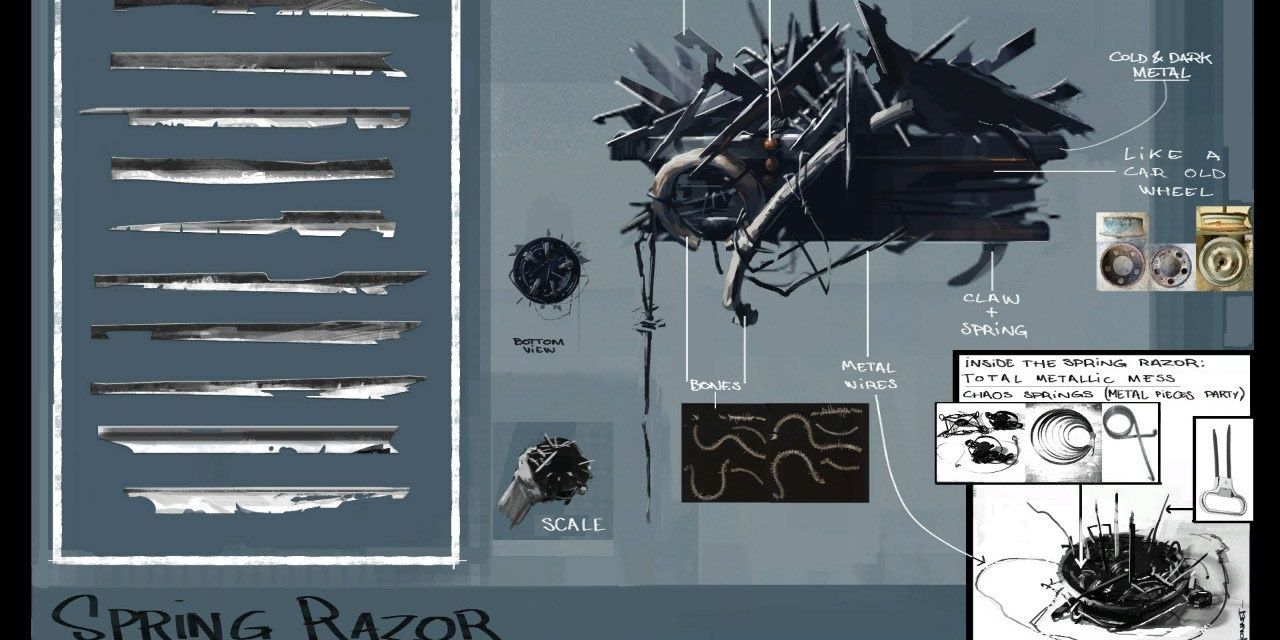 One of the core tenets of Dishonored has always been breaking the rules. Things are never just what they are, and everything is designed to be played with even if it feels like it's just a small part of the background. See a glass on a table? That's a distraction. Group of rats around a corner? A weapon. 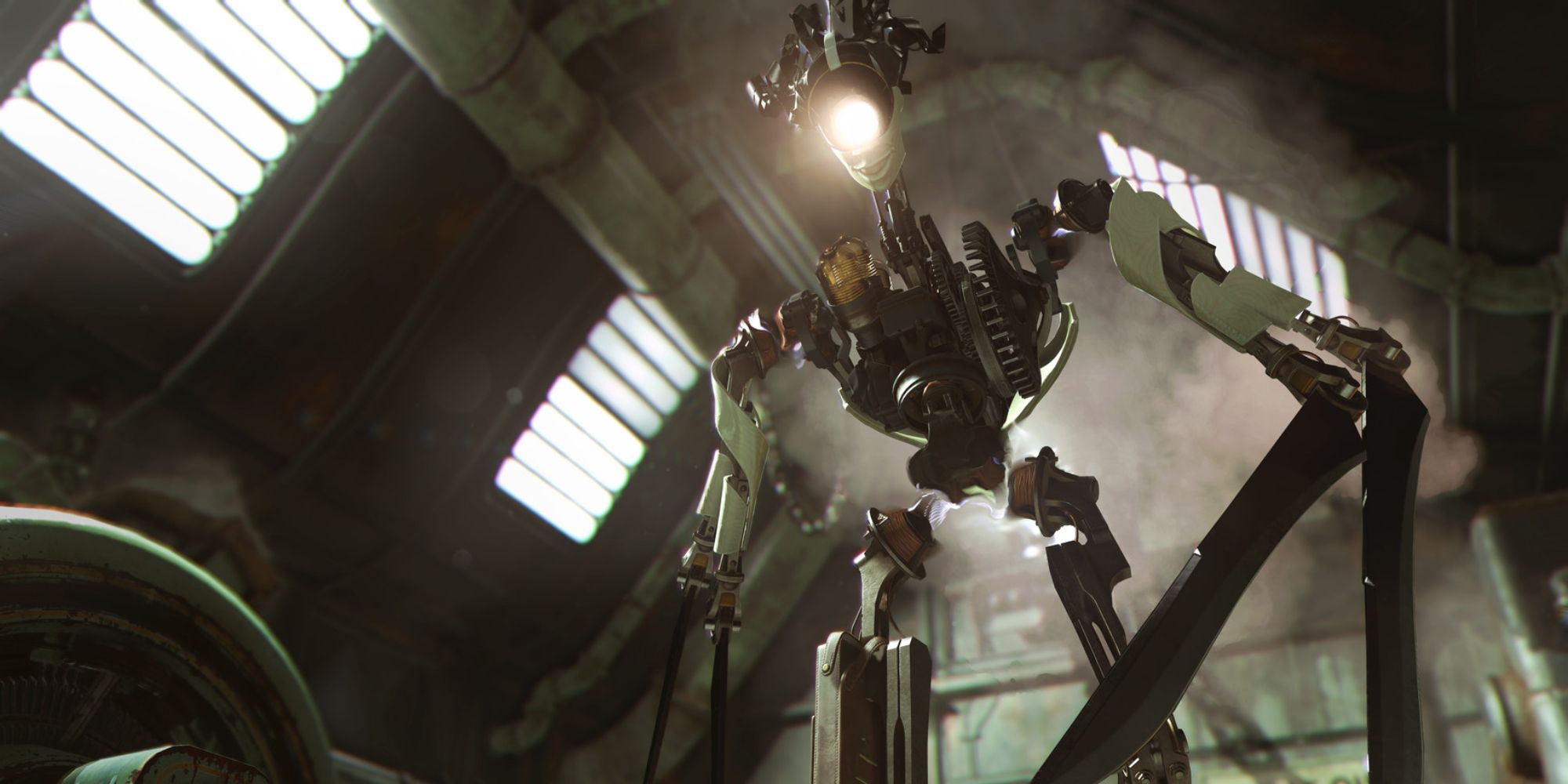 Dishonored thrives in its setting. The whale oil industry that powers everything, the arc pylons that tower as a warning not to approach, and so much more. But Dishonored is a playground, so its own mechanical marvels can be turned against it.

Introduced quite early, rewire tools are something of a logic flip. Rewire a watchtower and watch it open fire on enemies. Rewire a wall of light and convince the enemies to chase you through it to see them turn into dust. Rewire Clockwork soldiers and you have a personal soldier. The Rewire Tool is perfect for making the battleground yours. 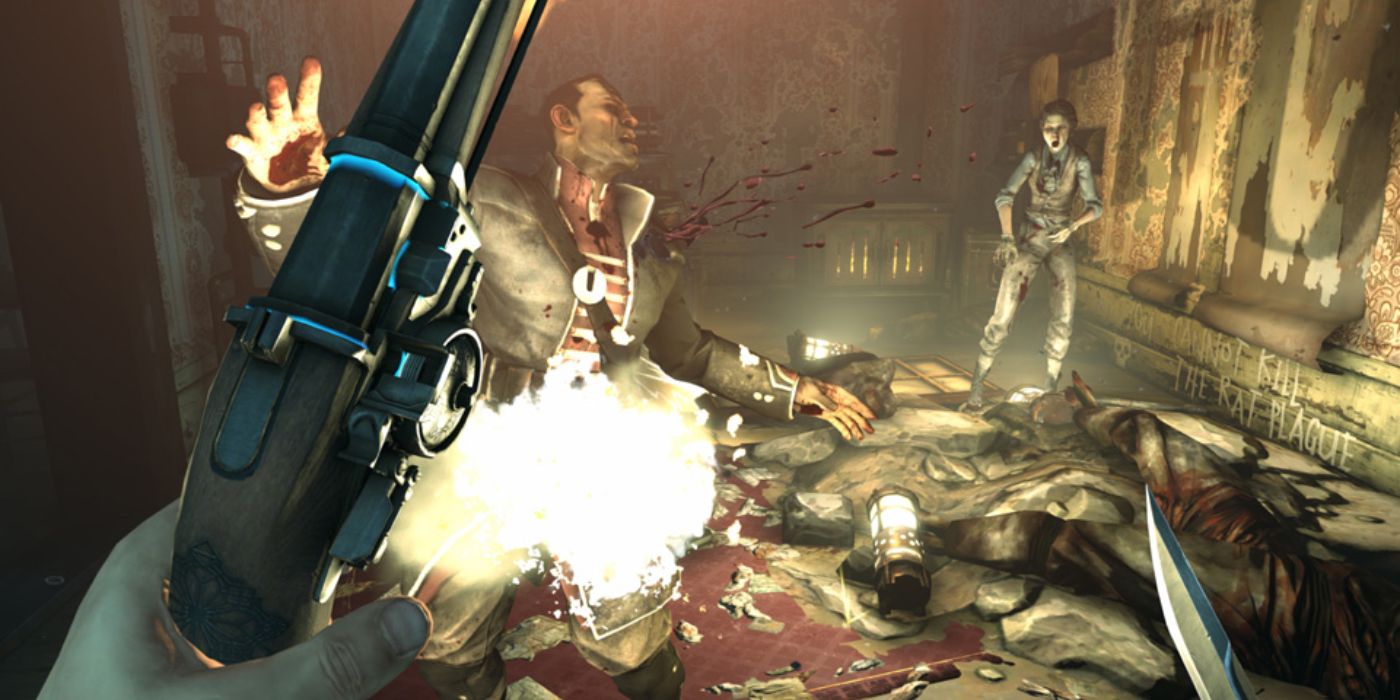 Although the original Dishonored has a fairly simplistic gun that is essentially just a louder crossbow, Dishonored 2 introduces masterwork upgrades, dramatically changing the play of the gun for each character.

The available masterwork upgrades are actually different for both characters. Corvo's are The Determined Traveller, turning his pistol into a pinpoint-precision rifle, and The Crimson Painter, which turns it into a shotgun with a wide range. Emily gets The Red Siblings and The Insistent Gentleman, giving her a three-round burst that kills anything or making her pistol fully automatic and able to avoid reloading. 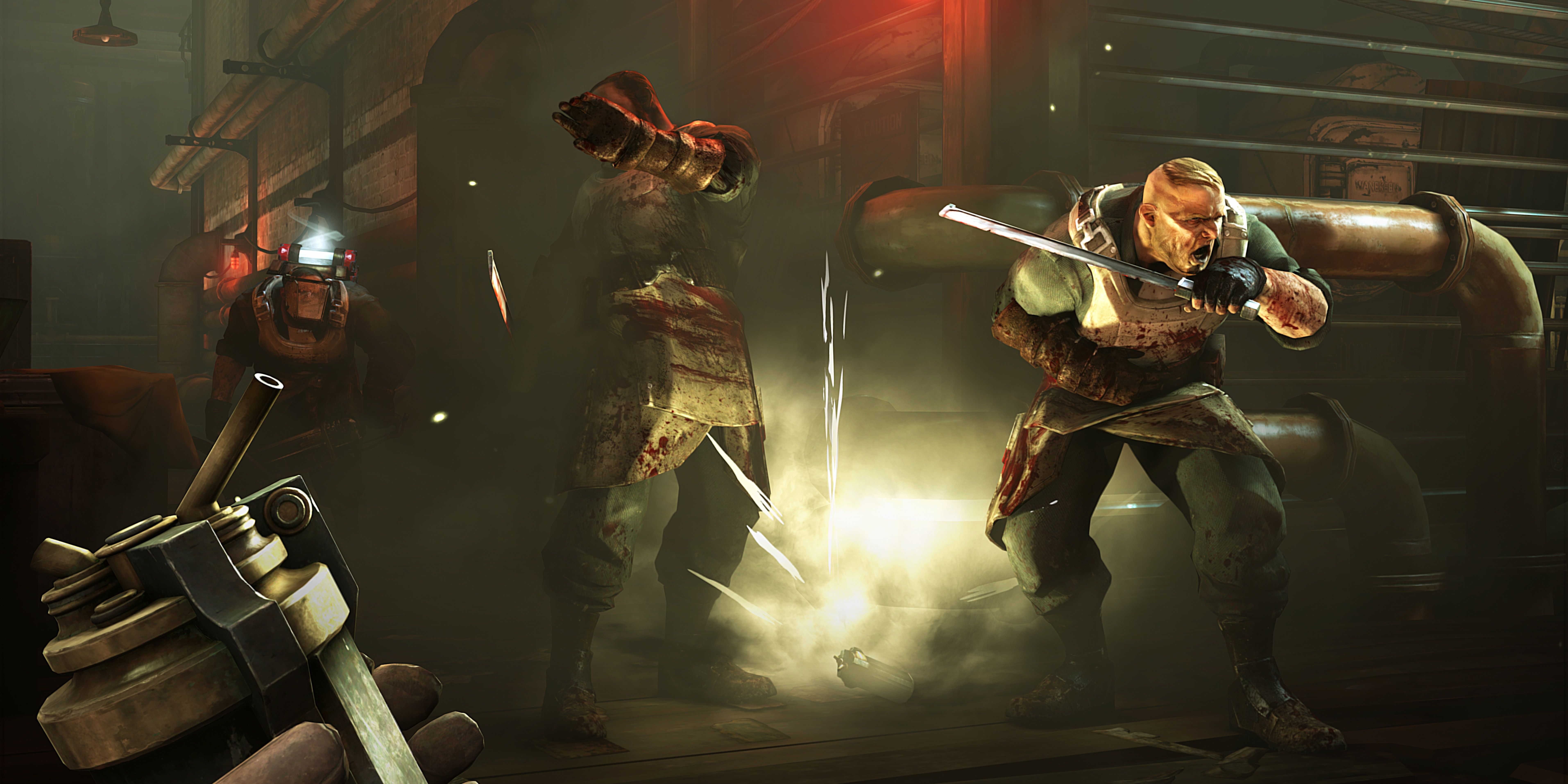 Some of the standouts of the original Dishonored were the two DLCs that expanded Daud's character, giving you an insight into his motivations and methods of practice. They worked wonderfully, telling a story that intersected with – but was also wholly independent of – the main game. It introduced plenty of new toys too.

Foremost of those were the Chokedust. These are similar to grenades but intended to be more non-lethal, acting functionally as a smoke bomb. However, they could later be upgraded to Baffledust, which held all the same properties and made any enemies forget they had ever seen you, even giving you a second chance at Ghost objectives.

6
Stun Mine And Arc Mine 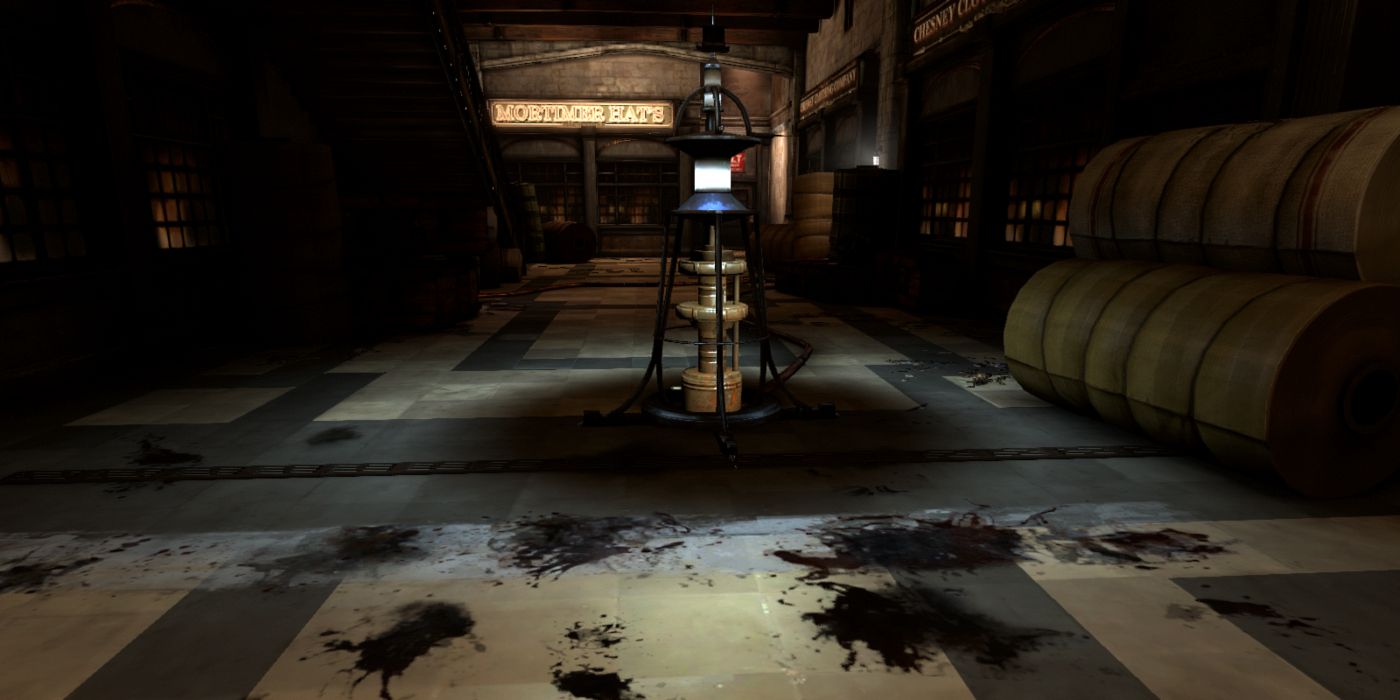 Once again based on the heavy mechanical design of the world, stun mines and arc mines are basically condensed arc pylons, large objects that would incinerate anyone who got too close. Arc mines and stun mines are miniatures, with the latter having the ability to simply knock out enemies rather than disintegrate them.

In Dishonored 2, stun mines come with an additional feature. If enemies are close to each other when the mine is activated, the mine will chain them, multiple at a time, all for one charge. And of course, it can still be atached to anything like a springrazor. 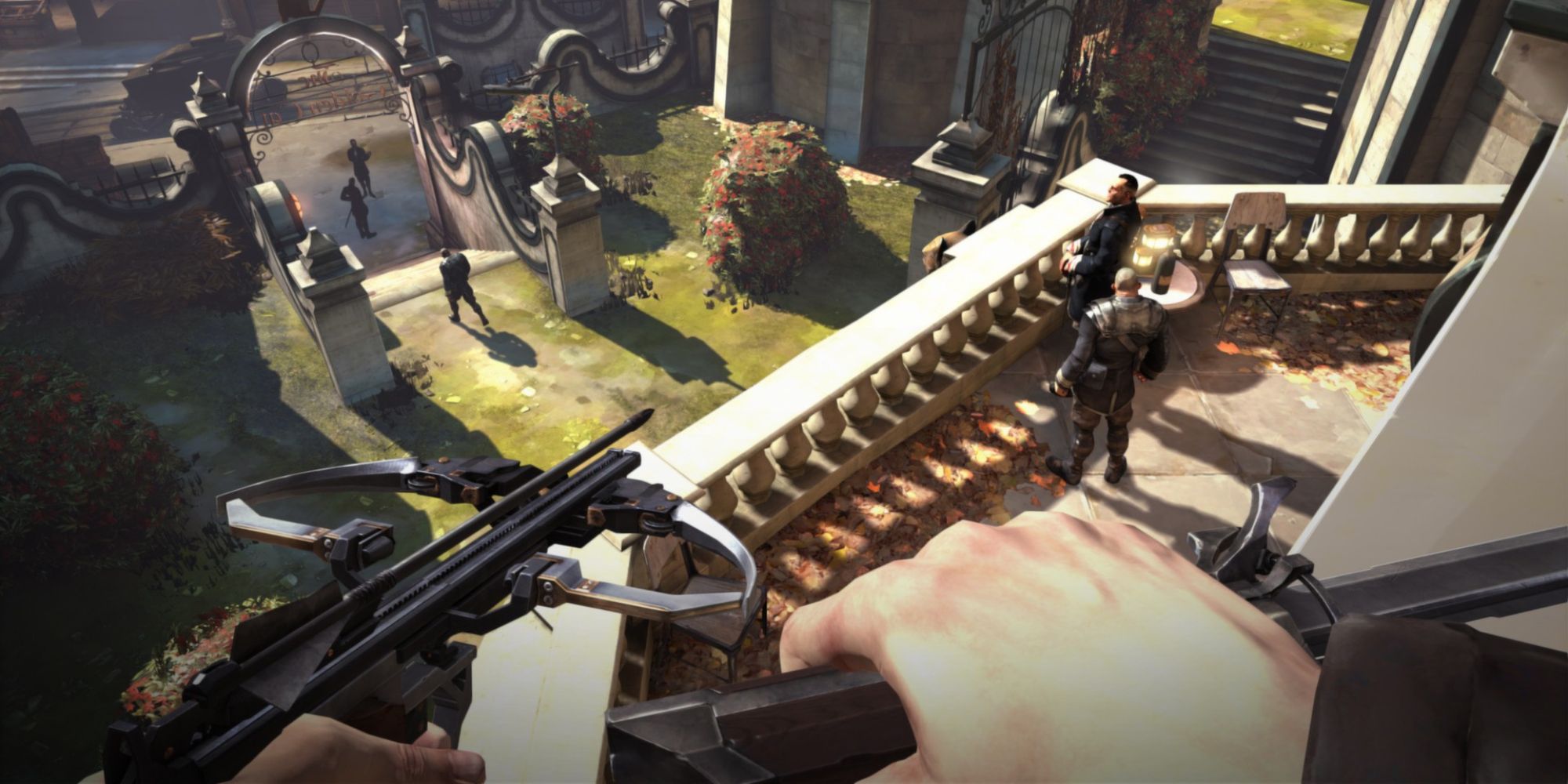 Similarly to the Pistol, the crossbow is a fairly simplistic weapon. Though it comes with the benefit of a few more options for ammunition than the pistol, and even more in Dishonored 2, it's still just a crossbow. Until the masterwork upgrades, of course.

For Corvo, the upgrades are Coffin Nails, which turns his crossbow into a semi-automatic killing machine, or The Dealer, which allows the crossbow to lock onto three enemies at once for only one bolt. For Emily, the upgrades are Piercing Insult, allowing bolts to be charged to both deal more and pierce enemies, and Long Distance Lover, giving her crossbow perfect aim with next to no fall-off. 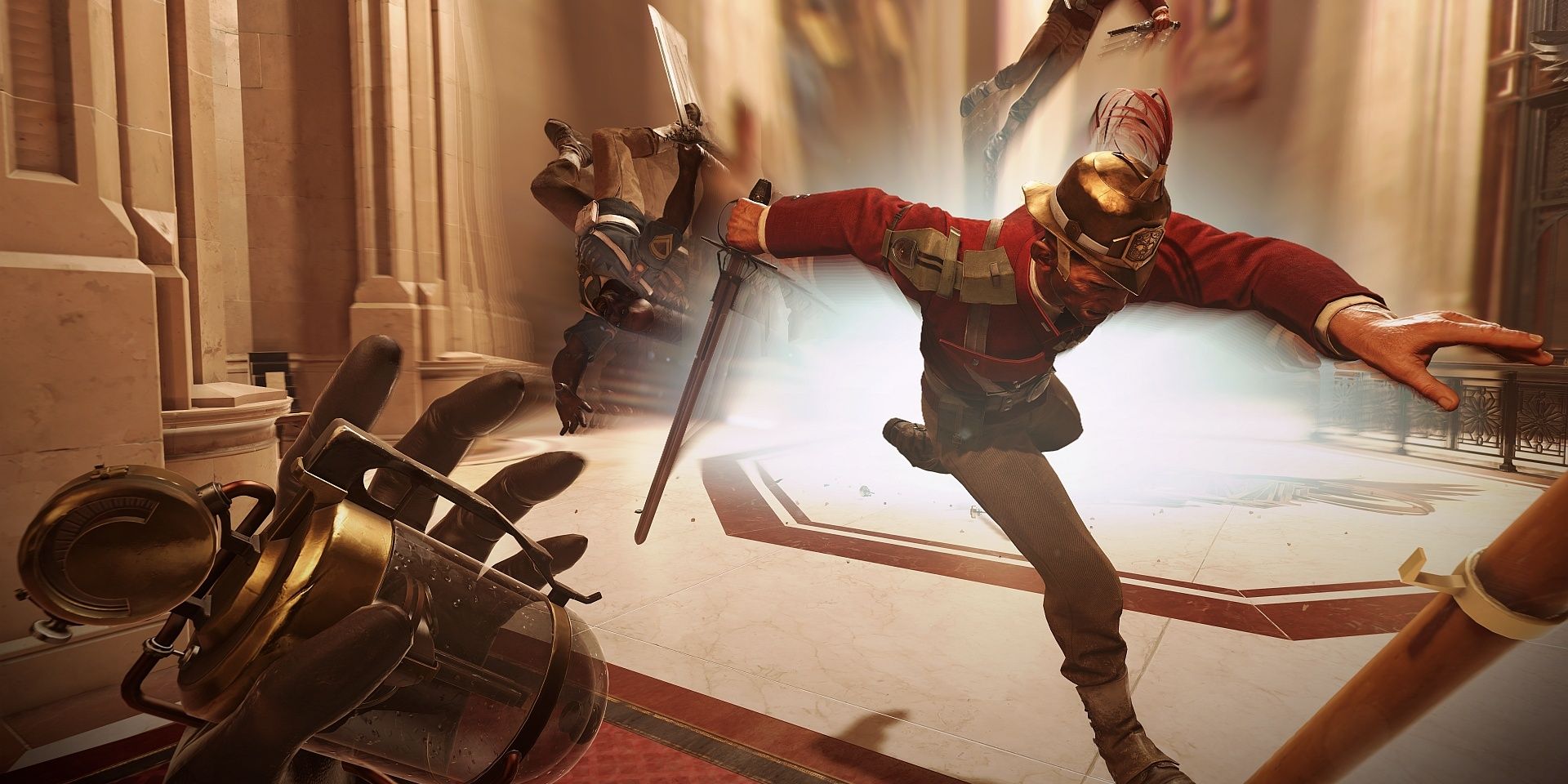 Death of the Outsider is something of the black sheep of the series. It tried many new things such as contracts in the middle of missions and regenerating mana while dropping more beloved features such as the chaos system. Yet despite these issues, it also brought with it some of the most interesting tools and gadgets in the series.

One of the biggest standouts is the Hyperbaric Grenade. For all intents and purposes, it is a non-lethal grenade, a loud blast knocking out anyone caught within. They can also be upgraded to make them almost silent, making them an effective stealth tool. You can't beat watching enemies ragdoll. 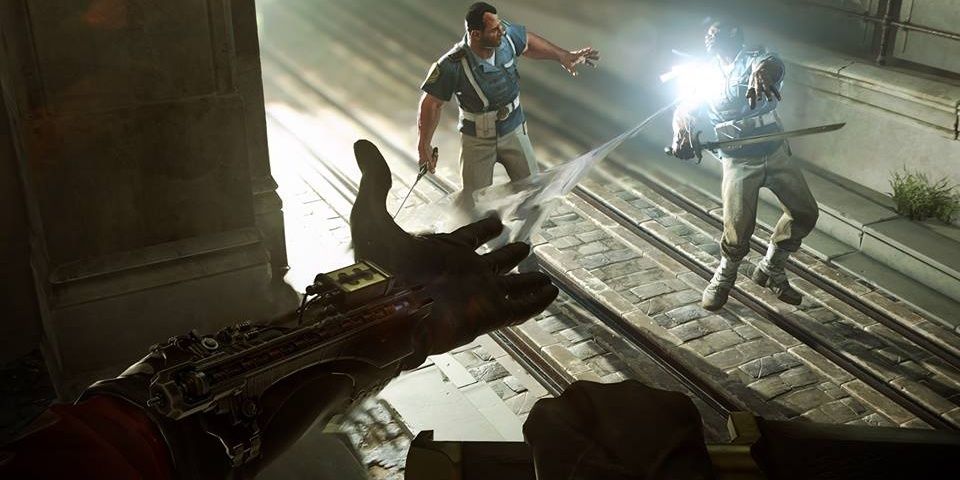 Another of the wondrous additions to Death of the Outsider is the Voltaic Gun, which is a visual blend between the crossbows of the main games and the wristbow of Daud. The voltaic gun actually comes with some unique mechanics and bolts of its own.

For one, various objects can be picked up as ammo, like crossbow bolts or even pens. It has an electrical bolt to incapacitate enemies, or even a retrievable hagpearl as a distraction tool. Not only that but the gun can also be charged. A charged bolt will tear limbs off, a charged hagpearl to the head will knock people unconscious and well, the electrical burst leaves behind a pile of ash. 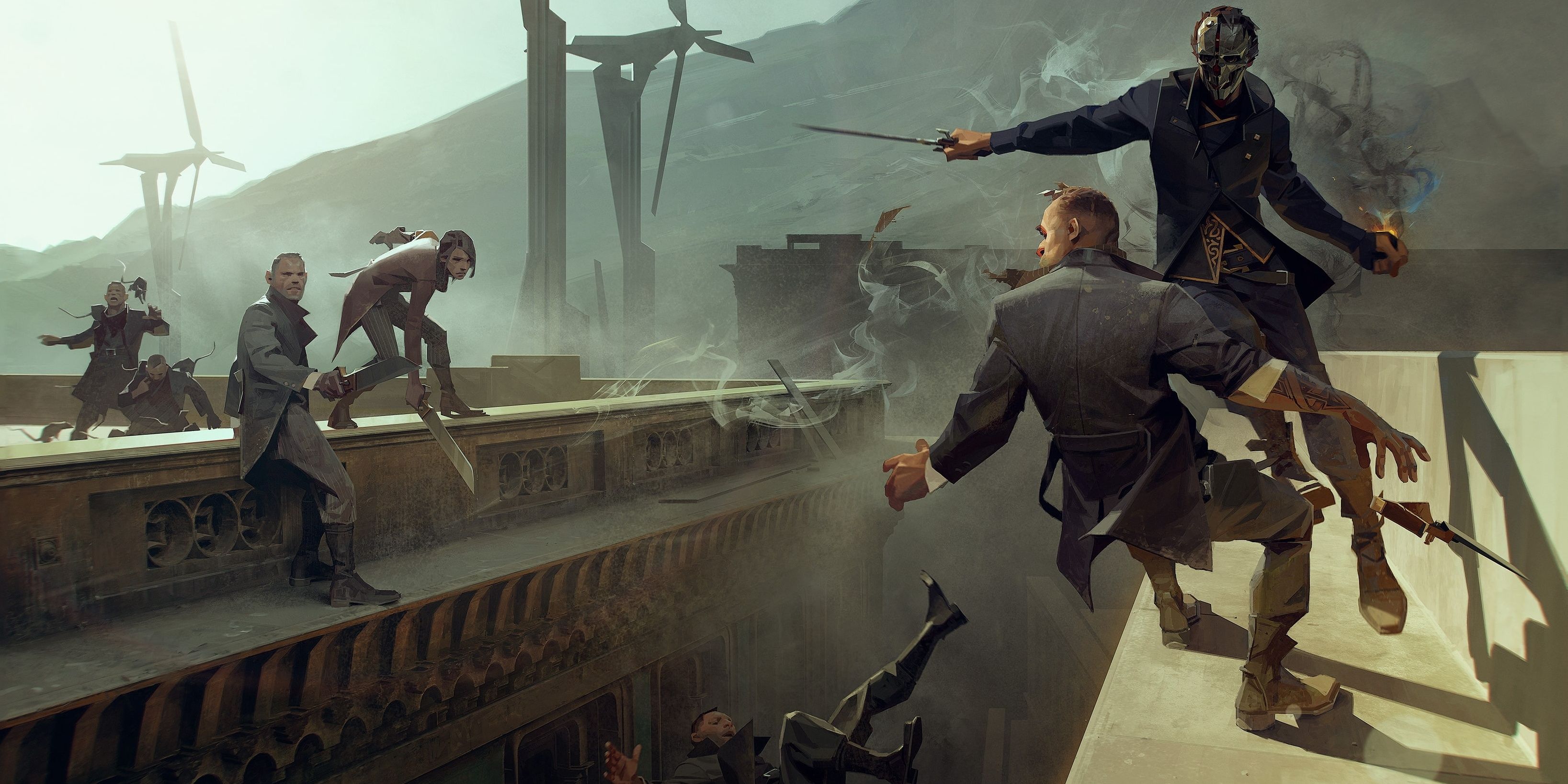 In Dishonored 2, a few new bolts were added to the mix. Stinging bolts took the place of Baffledust, with the added effect of enemies running away. But the more distinct and wholly unique of the additions are Howling Bolts, named after the Howler gang who made them.

Functionally, they operate like a flashbang, blinding enemies in the vicinity of the blast. However, the major advantage of Howling Bolts is that they function even if they hit a helmet, making them an ideal getaway and distraction tool. They also have masterwork upgrades, allowing them to function on either Delilah's witches, or on wolfhounds and gravehounds. 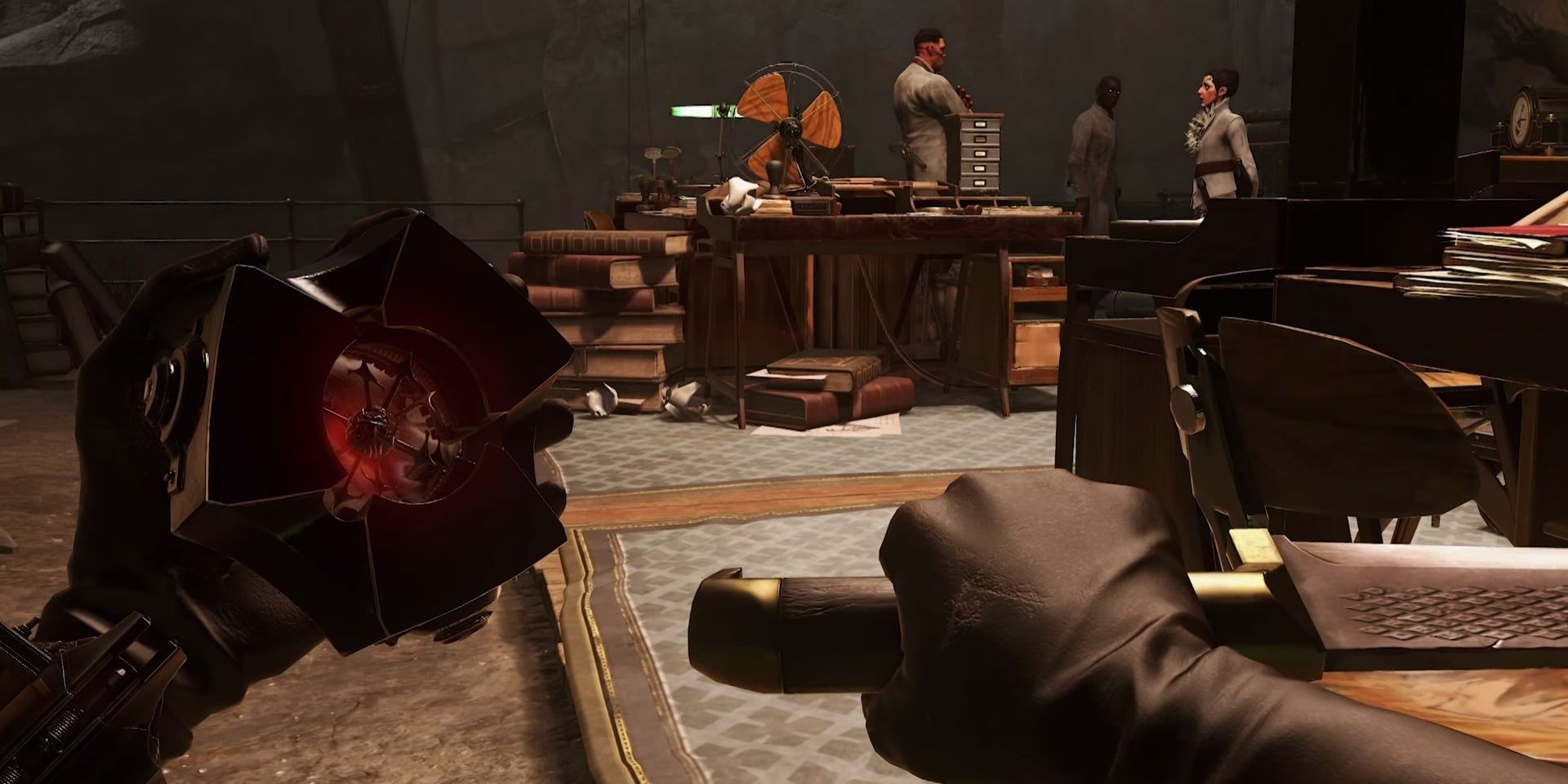 The final and altogether greatest of Death of the Outsider's new tools are the hook mines. They function wholly unlike anything else thus far and really are just a tool for fun. They can be set to both lethal and non-lethal, meaning they're useful for all players.

As the name implies, they act as hooks, dragging enemies towards the mines wherever they are placed. Of course, they can also be attached to enemies, letting them function as walking weapons. They also can be used as a homing grenade, attaching mines to explosive items and having them drag themselves towards enemies. They encapsulate the Dishonored experience, blending utility with pure fun.

Related posts:
12/03/2021 News Comments Off on Dishonored: 10 Best Tools And Gadgets In The Series
Hot News
The Elder Scrolls: What Happened To The Snow Elves?
Live action Pac-Man movie and Sonic The Hedgehog 3 confirmed
phencyclidine experience
The Biggest Gaming News For August 8, 2022
how long should you take amantadine
Recent Posts