Defeating the many bosses in Elden Ring is no easy feat, especially those bearing Remembrance Runes. But once you do, reaping the rewards is more satisfactory than most. Not only can you choose from an array of rewards that include Remembrance weapons, but the spells these bosses once wielded are nothing to scoff at.

From fiery blasts of doom to conjuring an entire dragon's head, these Remembrance spells are both fun to cast and extremely handy. Here are all the spells you can obtain from Remembrance Runes, and where to find the bosses that you'll need to defeat to acquire them. 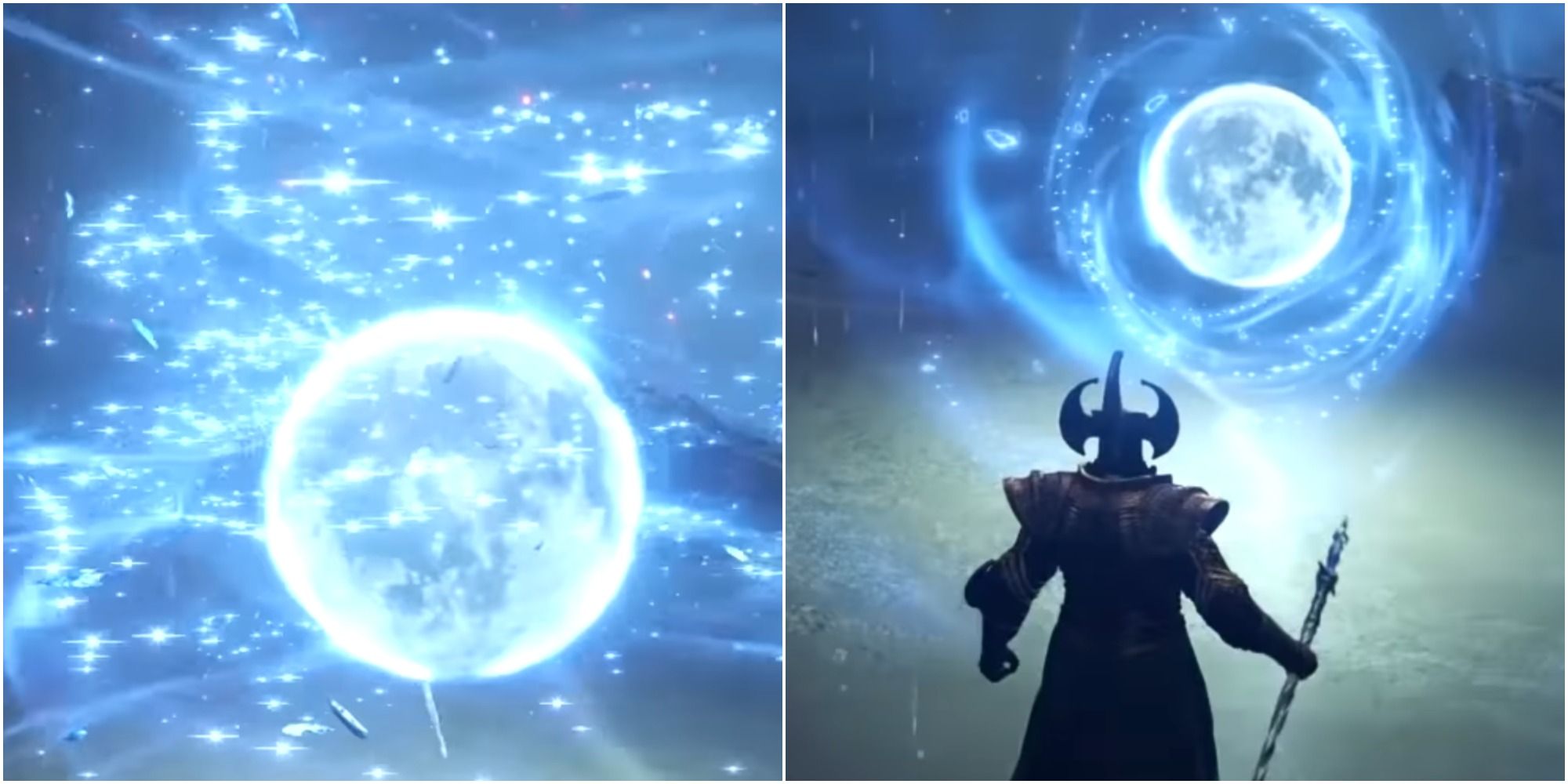 After defeating Rennala, Queen of the Full Moon, you'll get the option of wielding her arcane staff or her sorcery: Rennala's Full Moon. This spell allows you to perform the magical feats Rennala did during her boss fight, and it costs 55 FP to cast.

Once cast, however, you will float and encase yourself in a full, blue moon, before aiming and releasing it at your enemy, letting them take the entire brunt of what it's like to get hit by a literal cosmic satellite. 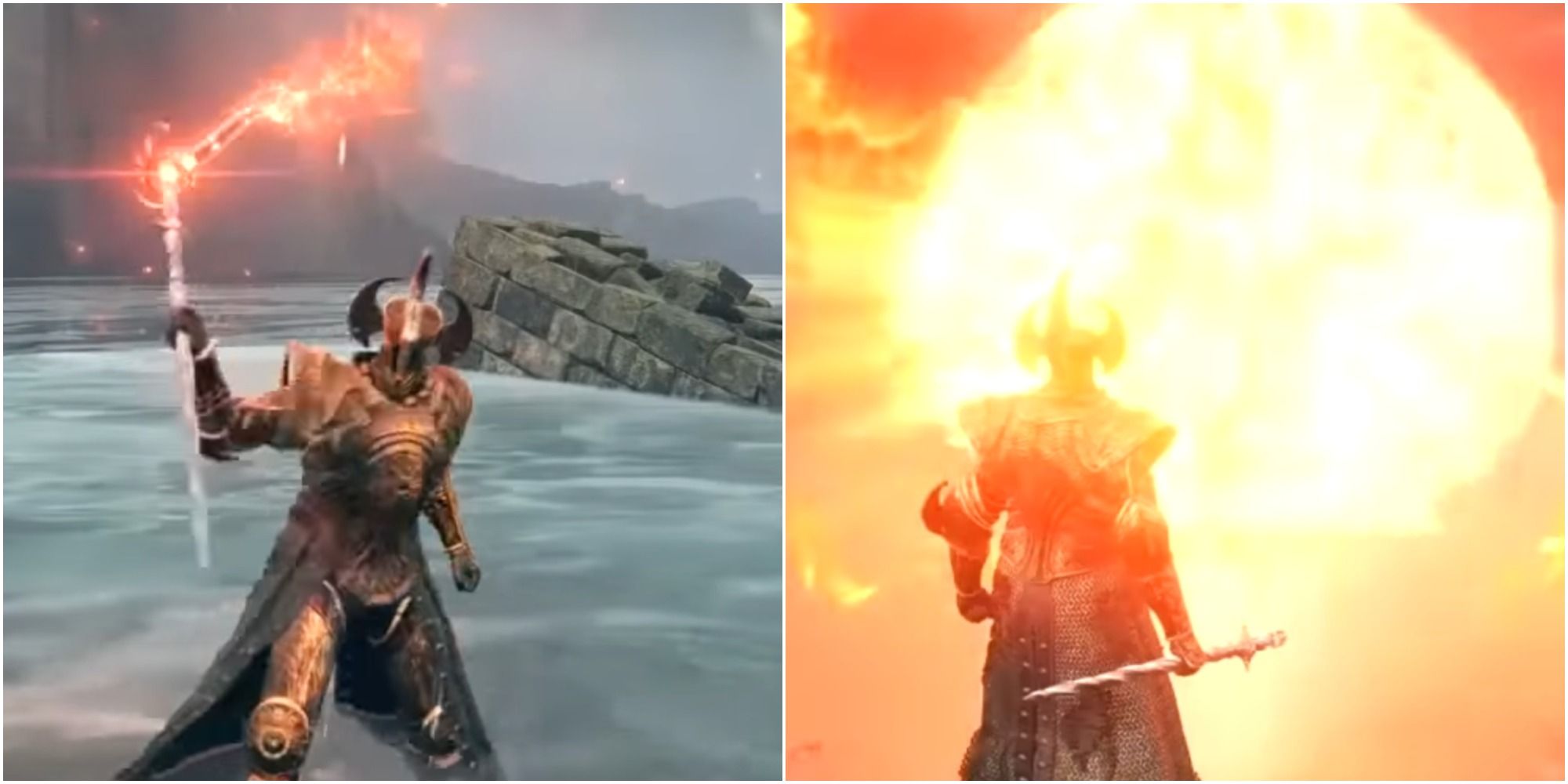 The Rykard, Lord of Blasphemy boss fight was truly a hellscape of fiery doom and ruin, with the large, human-faced serpent hurling torrents of flames down at you. But once dead, his power and spell are yours to wield as you see fit.

By casting this spell, a crimson skull will appear and head straight toward your target. This delayed attack is followed by a series of fiery explosions, followed by a huge blast just to make sure your enemy stays dead. 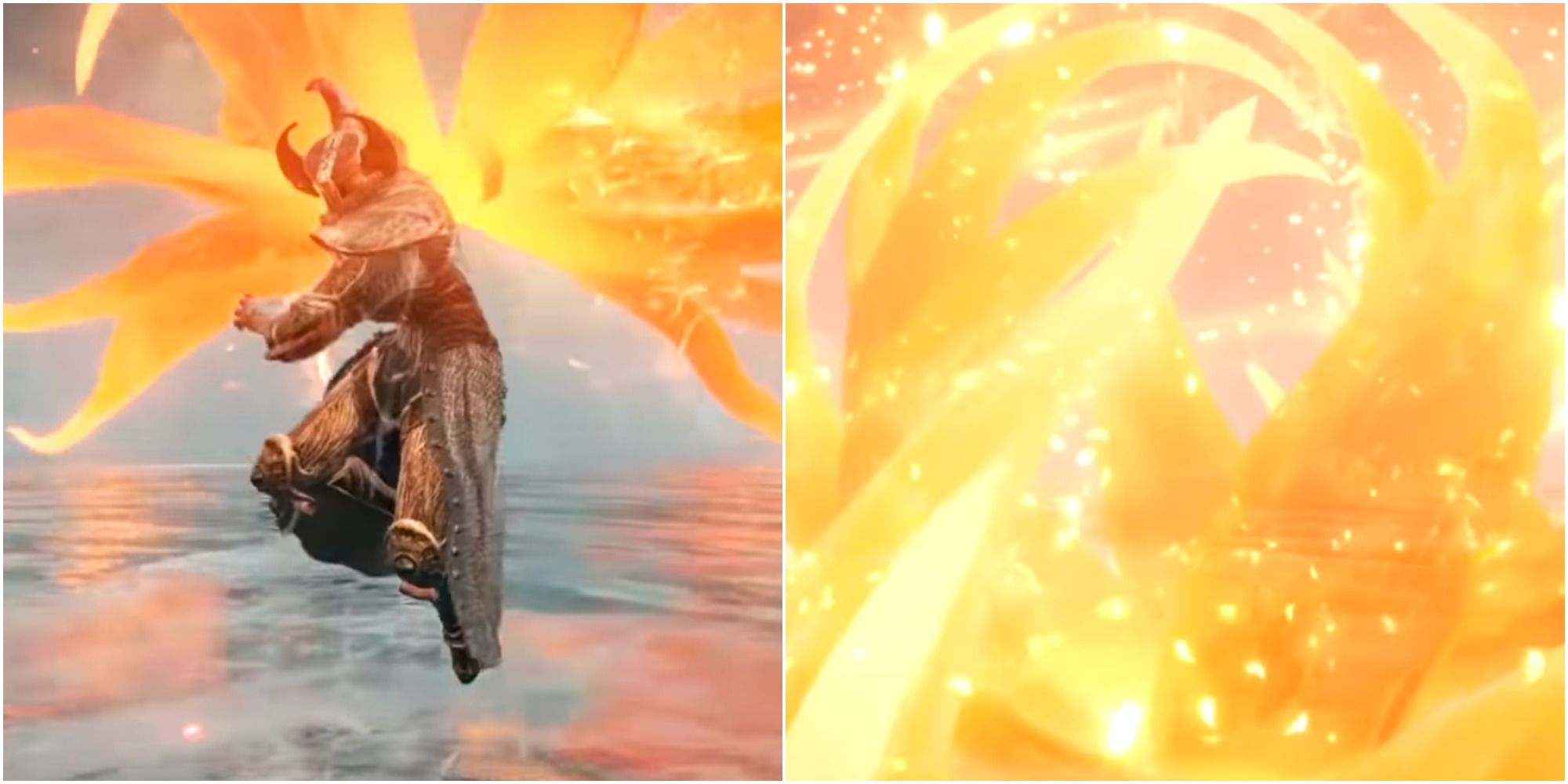 A reward from one of the most beautifully designed bosses, Malenia, Blade of Miquella's second phase sees her turn to the Goddess of Rot. Not only is she now able to fly, but she also turns into a magnificent, lethal burnt orange flower that exudes Scarlet Rot damage.

Called the Scarlet Aeonia, this spell causes flower petals to sprout from your back like wings. You then plant yourself on the ground, curling up into a flower bud, bursting to release Scarlet Rot buildup toward your enemies. If you remember getting one-shotted by this move, then you'll know this spell will come in handy for some super tough enemies. 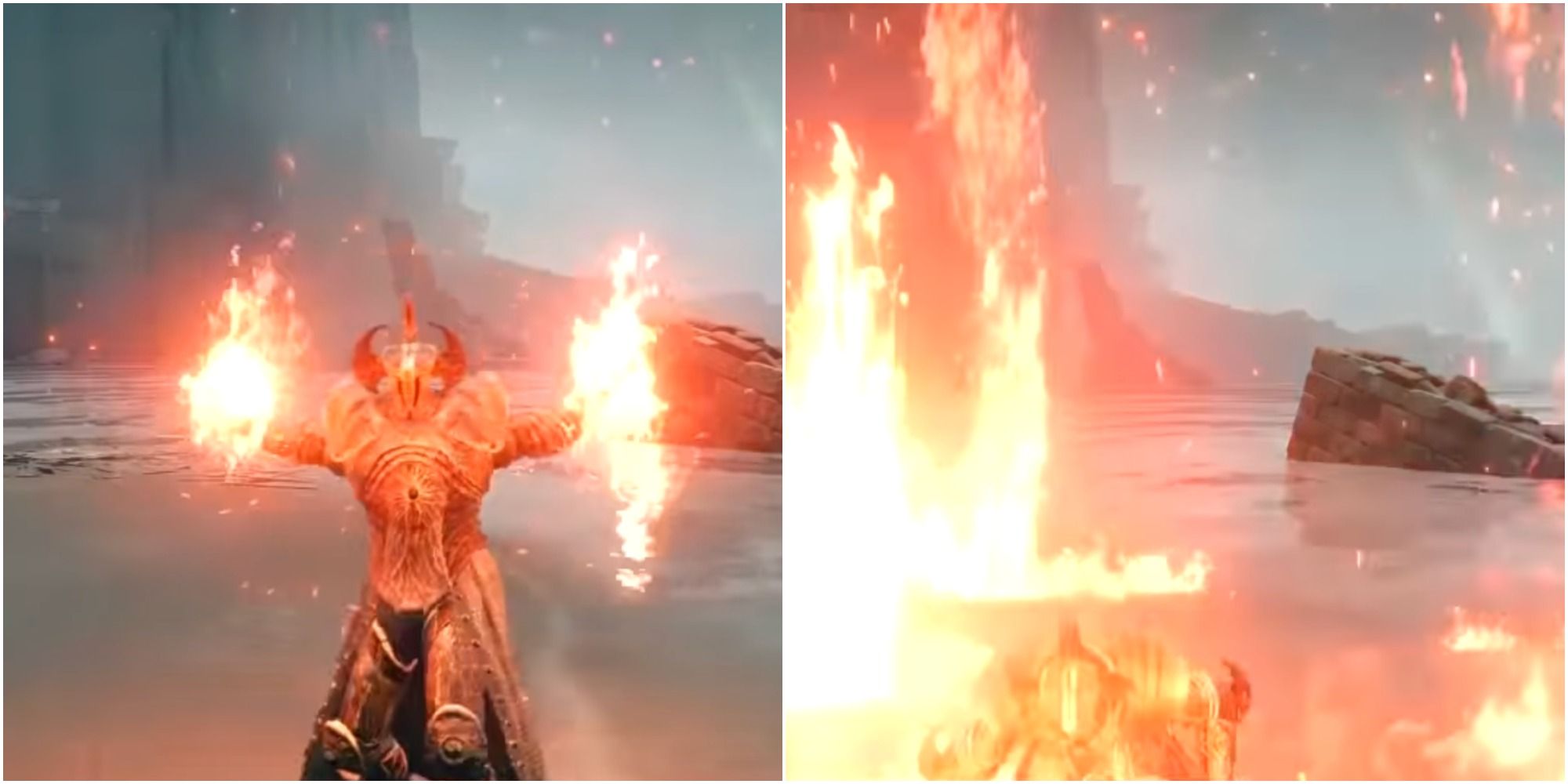 Once wielded by the Fire Giant boss, his 'Burn, O Flame!' spell was both irritating and rage-inducing to deal with when fighting him. But now it's your turn to inflict the fires of hell on your foes and raise mayhem.

By wreathing your hands in flames, you then smash them into the ground, causing fire pillars to soar from the earth and immolate your enemies. What's more, it only costs 30 FP to cast. 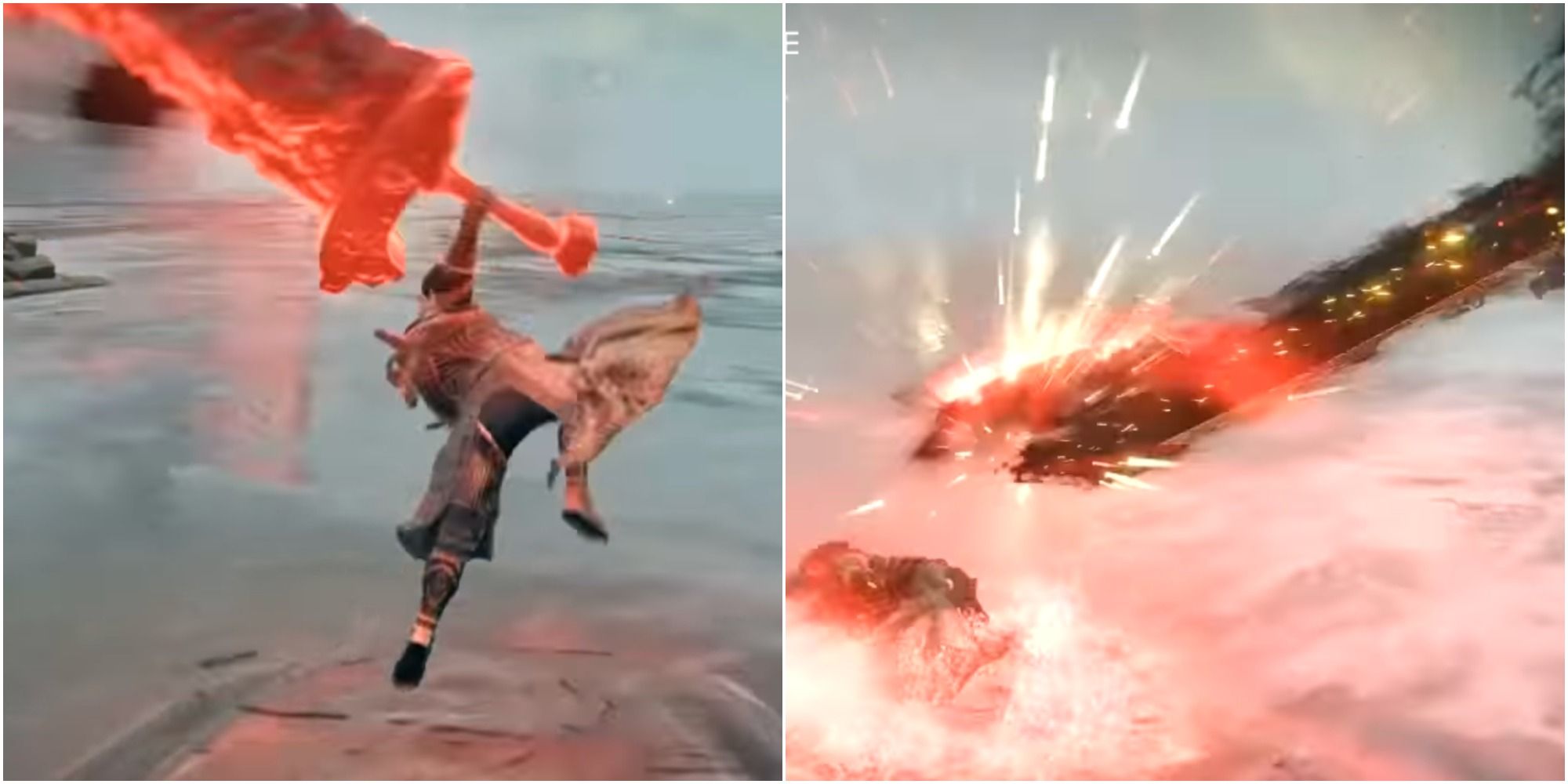 Maliketh, The Black Blade is a terror to behold, leaping and bounding around the boss arena with frightening agility, as well as flinging black-crimson projectiles that can one-shot you. After defeating him, you can choose to use his Black Blade sorcery and imbue it into your weapon.

Once you do the latter, you can launch yourself into the air with your weapon glowing red, before unleashing the same black-crimson projectiles at your enemies. It only costs 26 FP to wield. 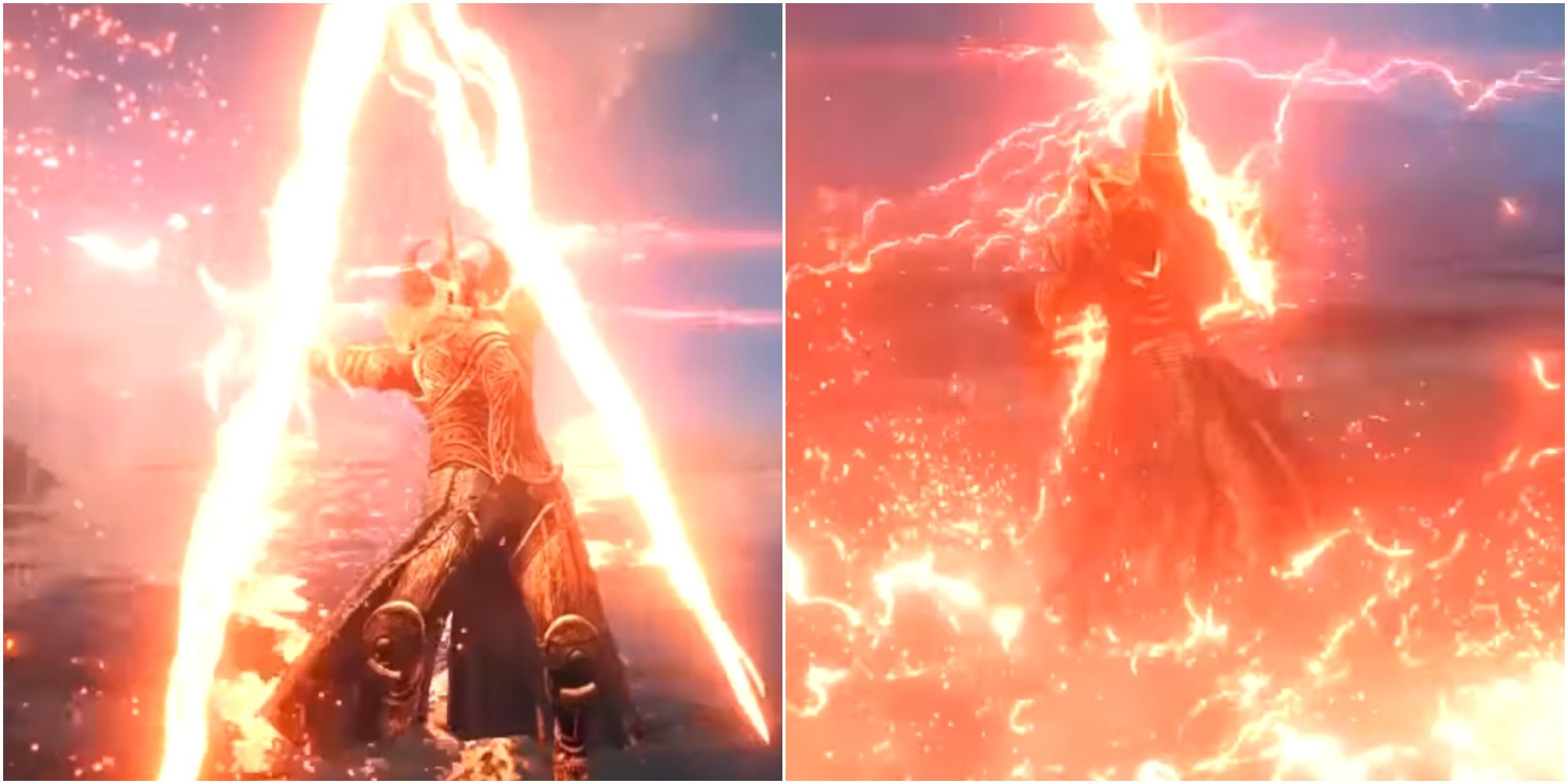 Similar to Ancient Dragon Lansseax, Lichdragon Fortissax wields a red lightning spear that it uses against you. The only difference is that instead of just sweeping attacks, Fortissax slams its lightning spears into the ground, creating a tsunami of red lightning to eat away at your health.

A formidable spell indeed, choosing to wield Fortissax's Lightning Spear will grant you the powers of a dragon god. By launching yourself in the air, you can conjure the same two lightning spears and throw them for some sickening AoE damage. 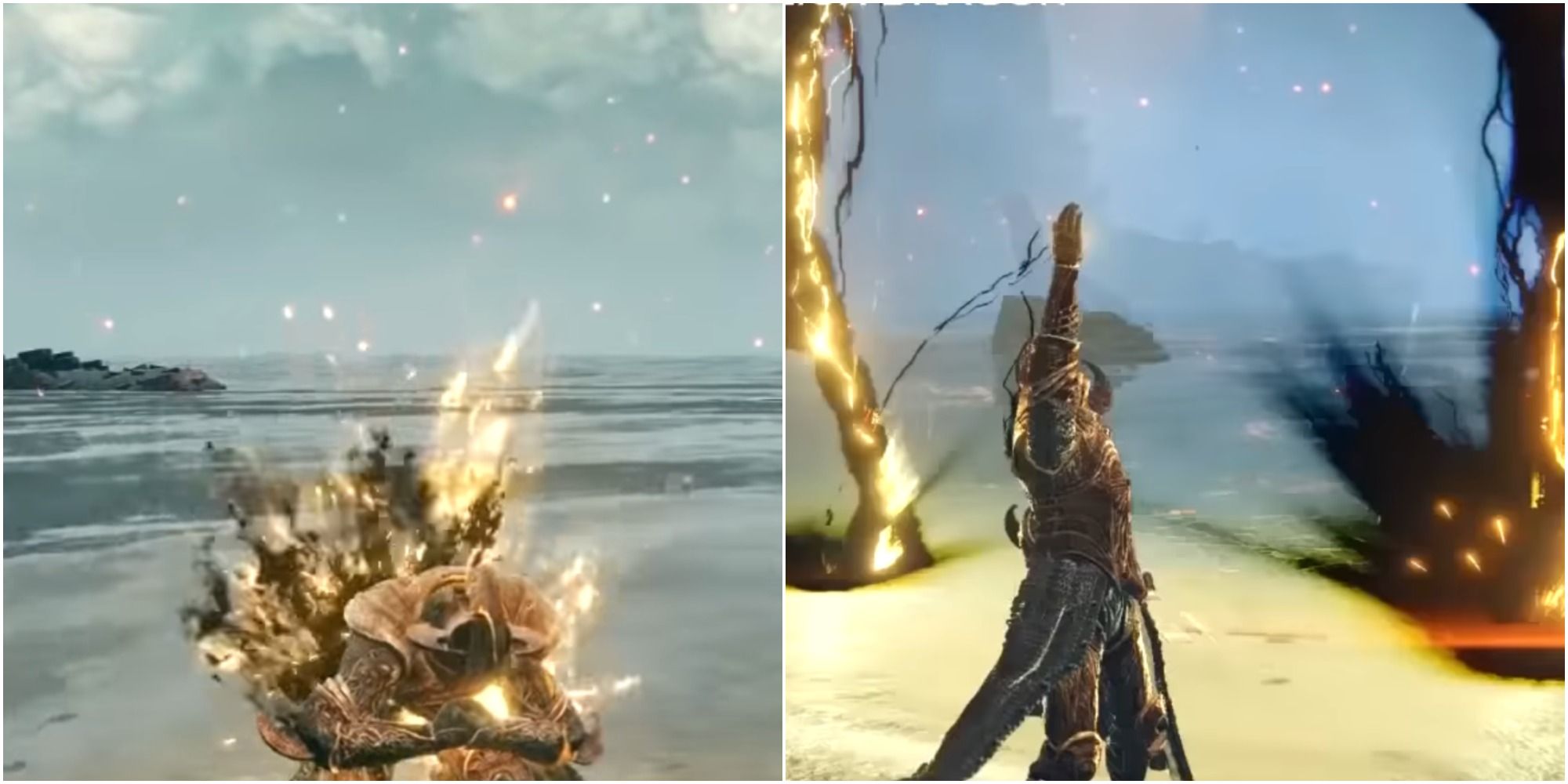 Lichdragon Fortissax's Remembrance Rune actually gives you the option of choosing between two spells, with the other being Death Lightning.

When you cast this spell, you lift your hand to the sky, which summons pillars of golden-black lightning to deal widespread damage to the surrounding area. This elemental storm-type spell is useful when you're not up to dealing with groups of enemies at a time, costing 46 FP to cast. You'll need 47 Faith and 32 Stamina to wield it effectively. 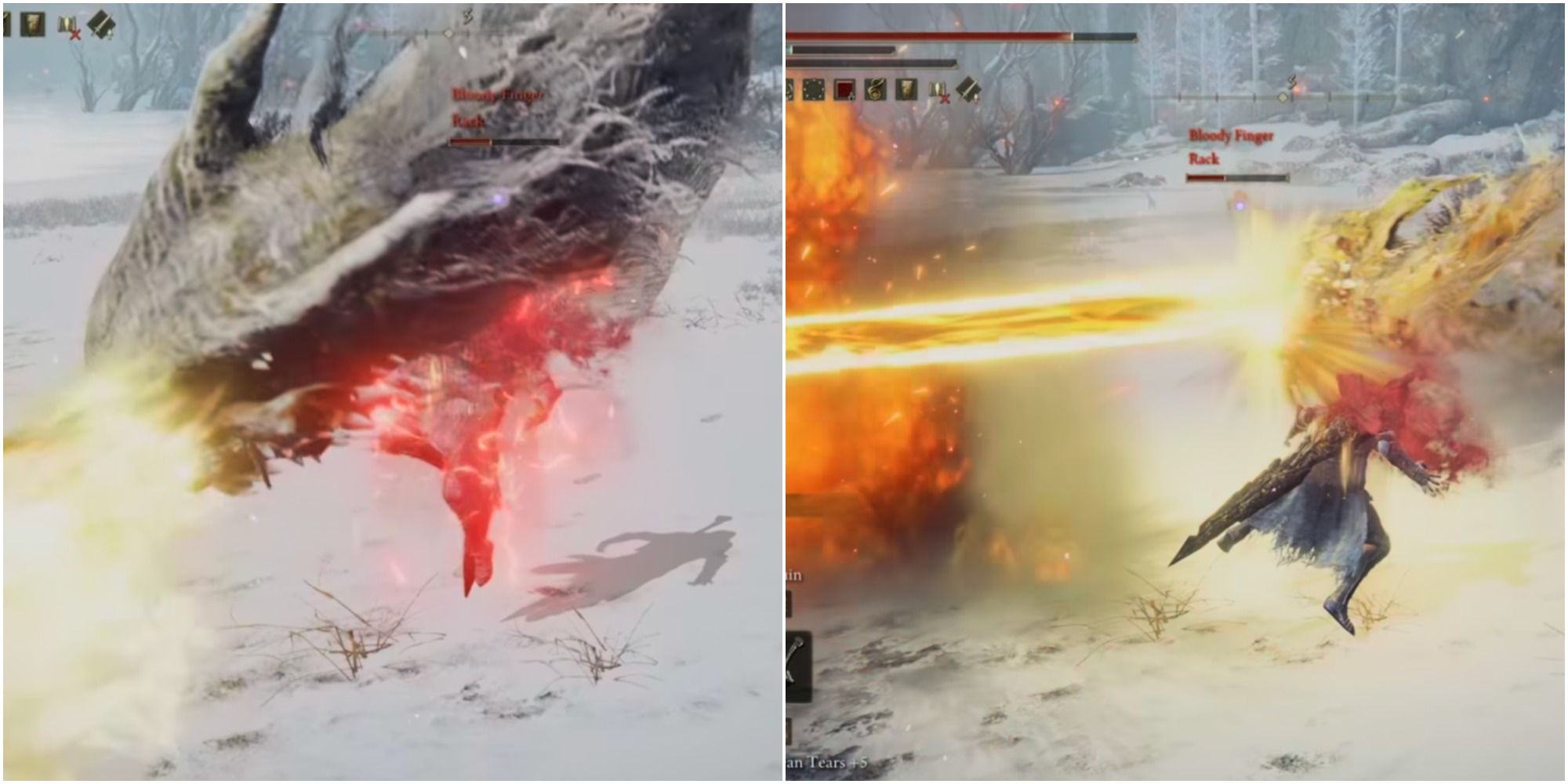 The hardest dragon boss in Elden Ring, Dragonlord Placidusax drops an incantation called Placidusax's Ruin. By casting it, you literally summon one of Placidusax's heads, which rears up to blast a flurry of golden fire before converging into a golden beam that annihilates your enemies.

One of the annoying things about fighting Dragonlord Placidusax is the moment he shoots his fire beam from his maw, as it can destroy your HP bar. Even though it's pretty late in the game, it'd be fun to run around the map and roast enemies with this gigantic dragon's head. 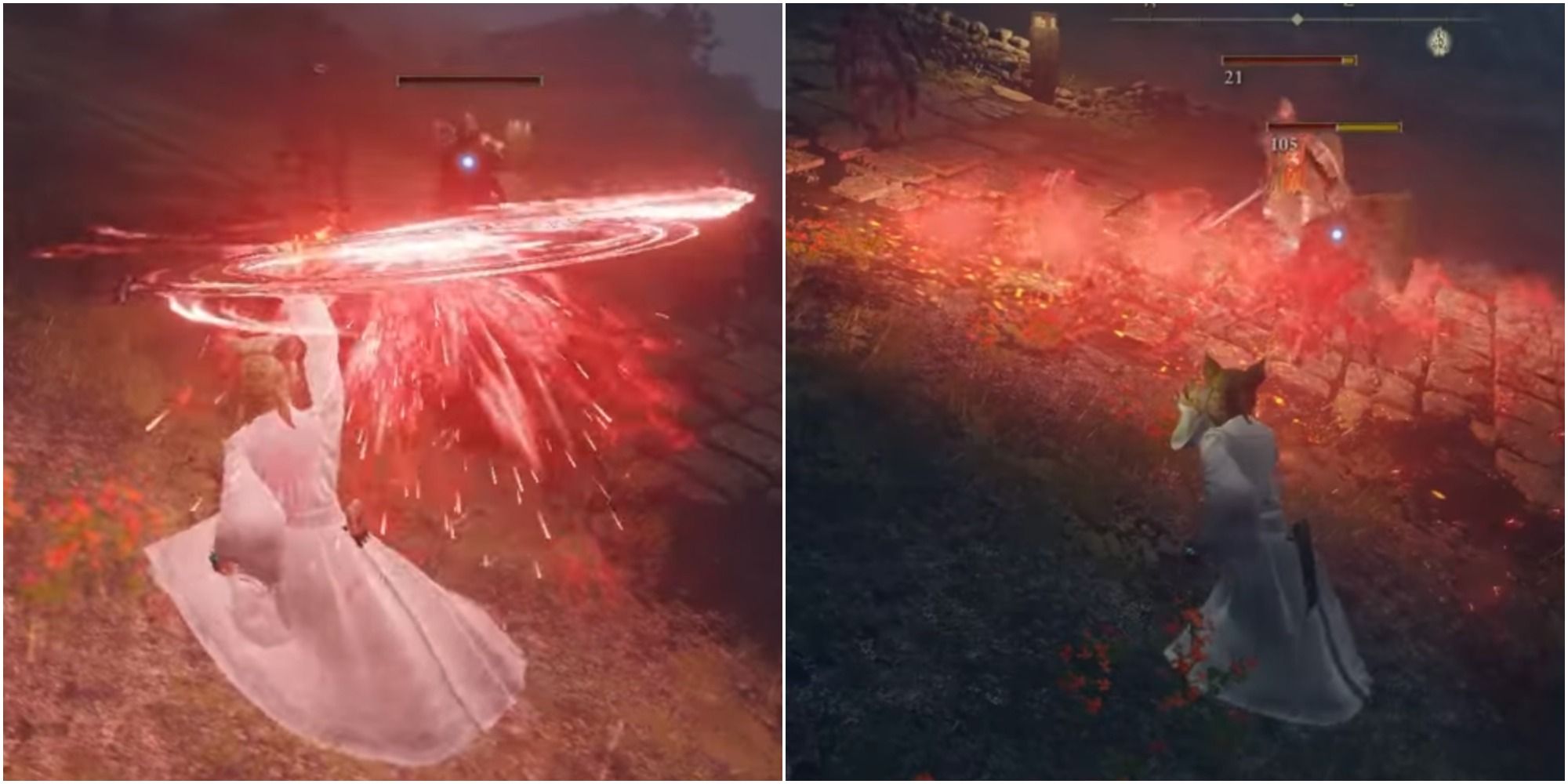 Looking to play as a blood mage? Mohg, Lord of Blood's Remembrance Rune grants you the opportunity to add to your arsenal of blood spells with his incantation spell Bloodboon. You'll see Mohg use this spell in conjunction with his weapon, Mohgwyn's Sacred Spear.

When using this spell, a pool of blood appears above you, and you reach in and fling a flurry of bloodflame at your enemies. This deals both Hemorrhage buildup and massive damage in one go.