The Elden Ring Alexander quest is a lengthy questline that spans almost the entire game and involves several other important characters. It’s largely a passive mission, requiring you to speak with Alexander and nothing more, though the mid-point involves defeating one of Elden Ring’s most challenging bosses.

Like most of the game's quests, Alexander’s doesn’t have a happy ending. It’s also not tied to any of the title’s potential endings, so if you prefer your giant jar man whole, hale, and hearty, you might want to let him go his own way after the Radahn fight.

How To Start Alexander’s Quest In Elden Ring 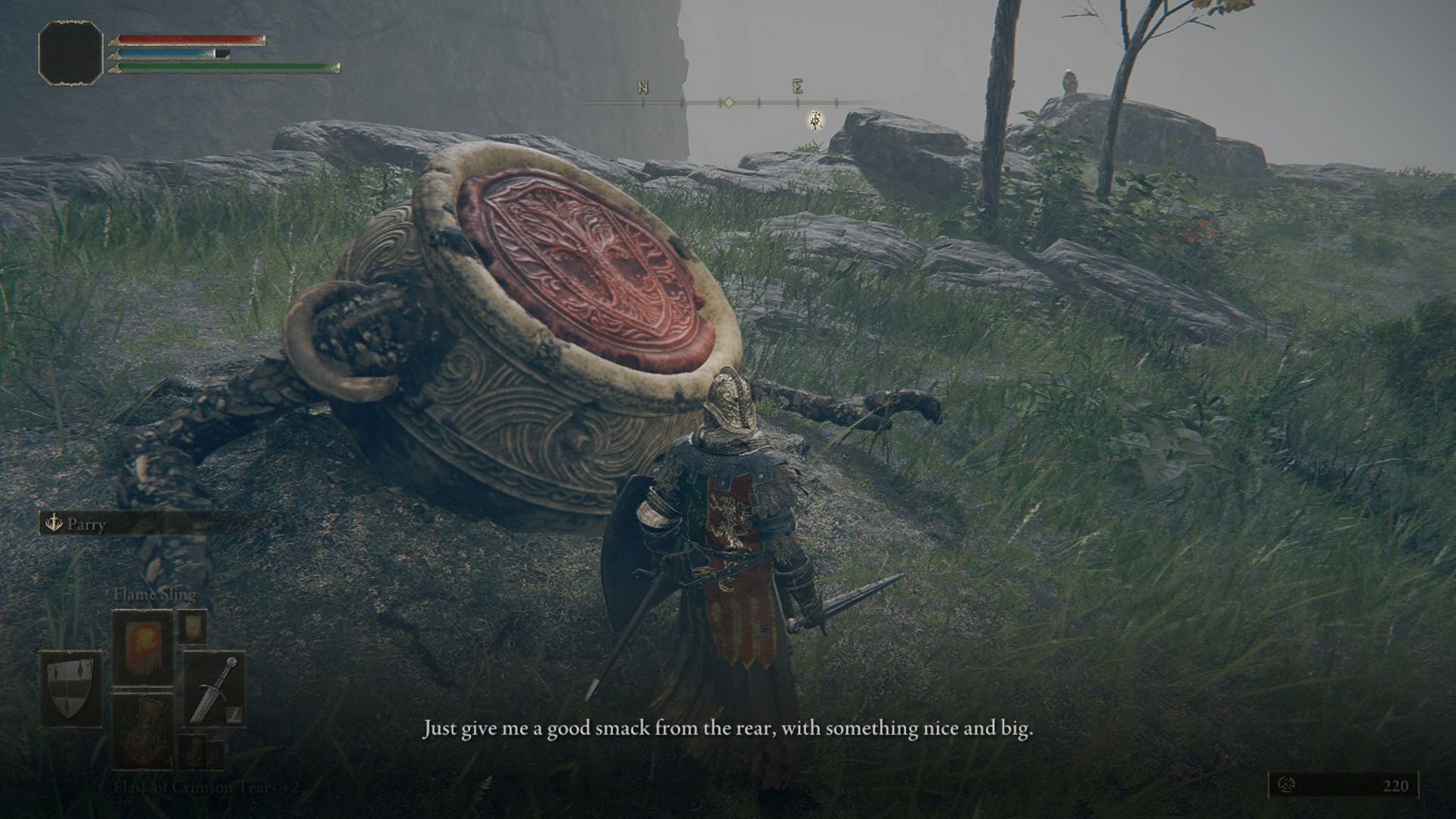 Alexander’s quest begins on Stormhill in Limgrave. Travel east along the road from the Warmaster’s Shack, and pick off the soldiers and mercenaries as you go. You’ll eventually hear a voice calling for help. Climb up the hill on your right to find Alexander, stuck in the ground. If you speak with him, he asks you to give him a good whack from behind to help push him free. Use a normal attack, and out he pops.

Speak with Alexander again. He’ll hand over some Exalted Flesh, which temporarily boosts your attack power by 20 percent, and mentions a combat festival being held at Redmane Castle in Caelid. That’s all you can do with him for now. You can find Alexander again in a few locations after this, but if you’re still just getting started in Elden Ring, the quest’s next full step is still a while off.

You can find Alexander in Gael Tunnel, east of Summonwater Village and on the border of Limgrave and Caelid. It’s not a required part of his quest, and he doesn’t give you anything for it. However, the tunnel’s boss – a Magma Wyrm – drops the Moonveil Katana, an excellent Intelligence-scaling sword with a unique skill that can stagger some enemies. If you’re playing as an Intelligence character, it’s worth exploring the tunnel.

Your next stop is Redmane Castle, but you’ll probably want to wait a while. The battle ahead is incredibly difficult.

How To Get To Redmane Castle In Elden Ring 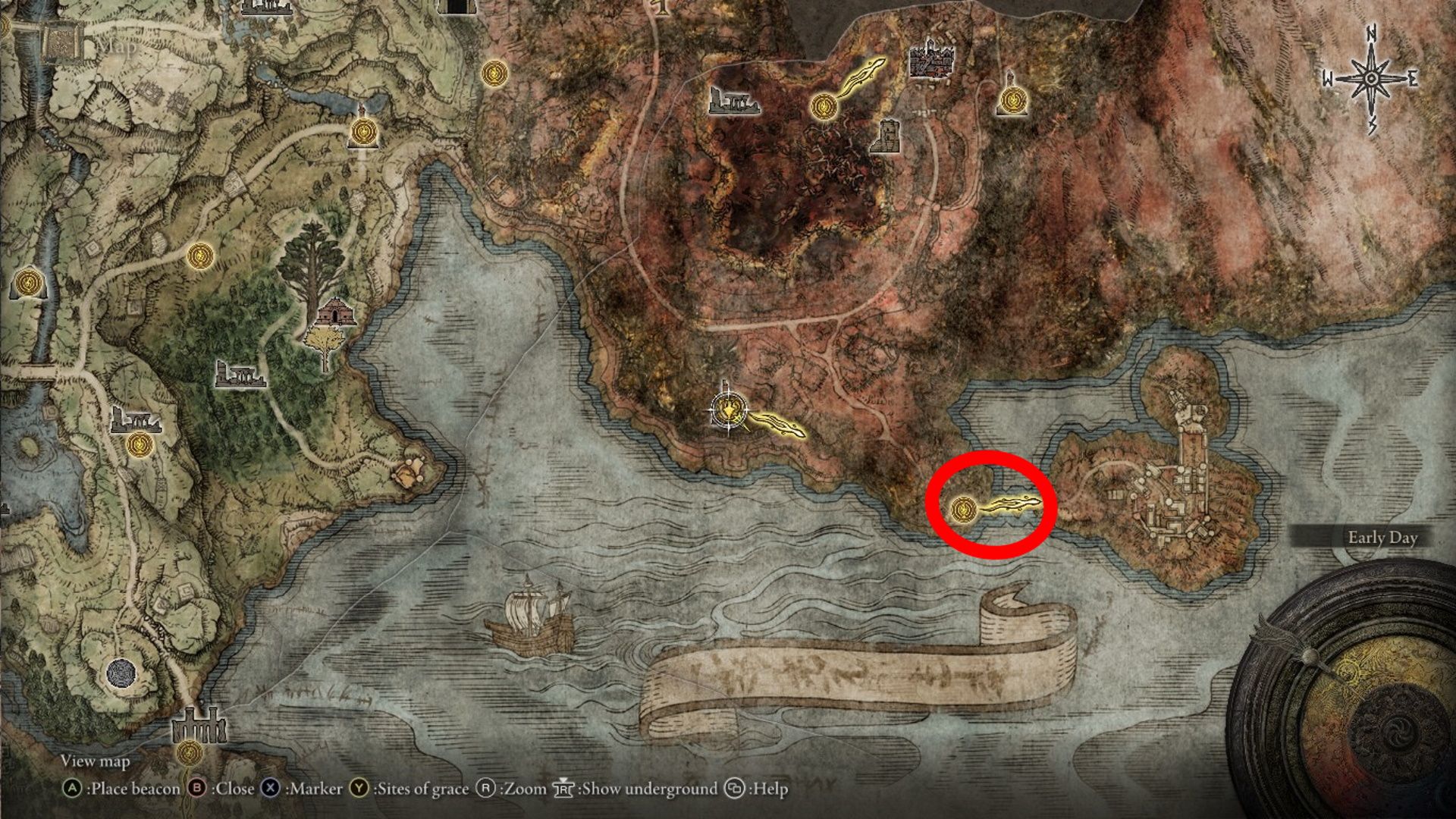 Whether you found him in Gael Tunnel or not, Alexander appears next in Redmane Castle. Redmane Castle is on an island in southern Caelid. You can get there just by following the region’s main road around Aeonia Swamp and taking a right at the junction near Decaying Dragon Ekzykes.

You have a few options for getting inside to the festival. The first is navigating the castle as a mini-dungeon, dealing with its traps and enemies. The second is waiting until the festival officially begins, when you can take a portal from the Impassable Greatbridge Site of Grace straight to the festival grounds.

The trouble is figuring out when the game decides the festival begins, as it seems there are several possible independent triggers:

After doing any or all of these, the teleportal should be available next to the bridge’s Site of Grace.

When you get there, speak with Jerren, the old man in red and green clothes, until he declares the festival as open. You can also speak with the NPCs in the courtyard, including Blaidd, Therulina the Finger Maiden, and Alexander. Speaking with Alexander is not required to move the quest forward, though.

Take the lift outside the chapel down to the beach and get ready to fight Radahn – or let him do it himself. If you do choose to fight normally, you can use the gold summon signs to bring six NPCs into battle, including Blaidd and Alexander. They’ll likely die, but it’s not a permanent death. You can summon them in the Radahn battle again, and even if they keep dying, they’re still alive outside Redmane Castle.

Activate the new Site of Grace once Radahn falls, then reload the area. You’ll find Alexander searching the ground and can speak with him, though he doesn’t give you anything.

Where Is Alexander After Radahn? 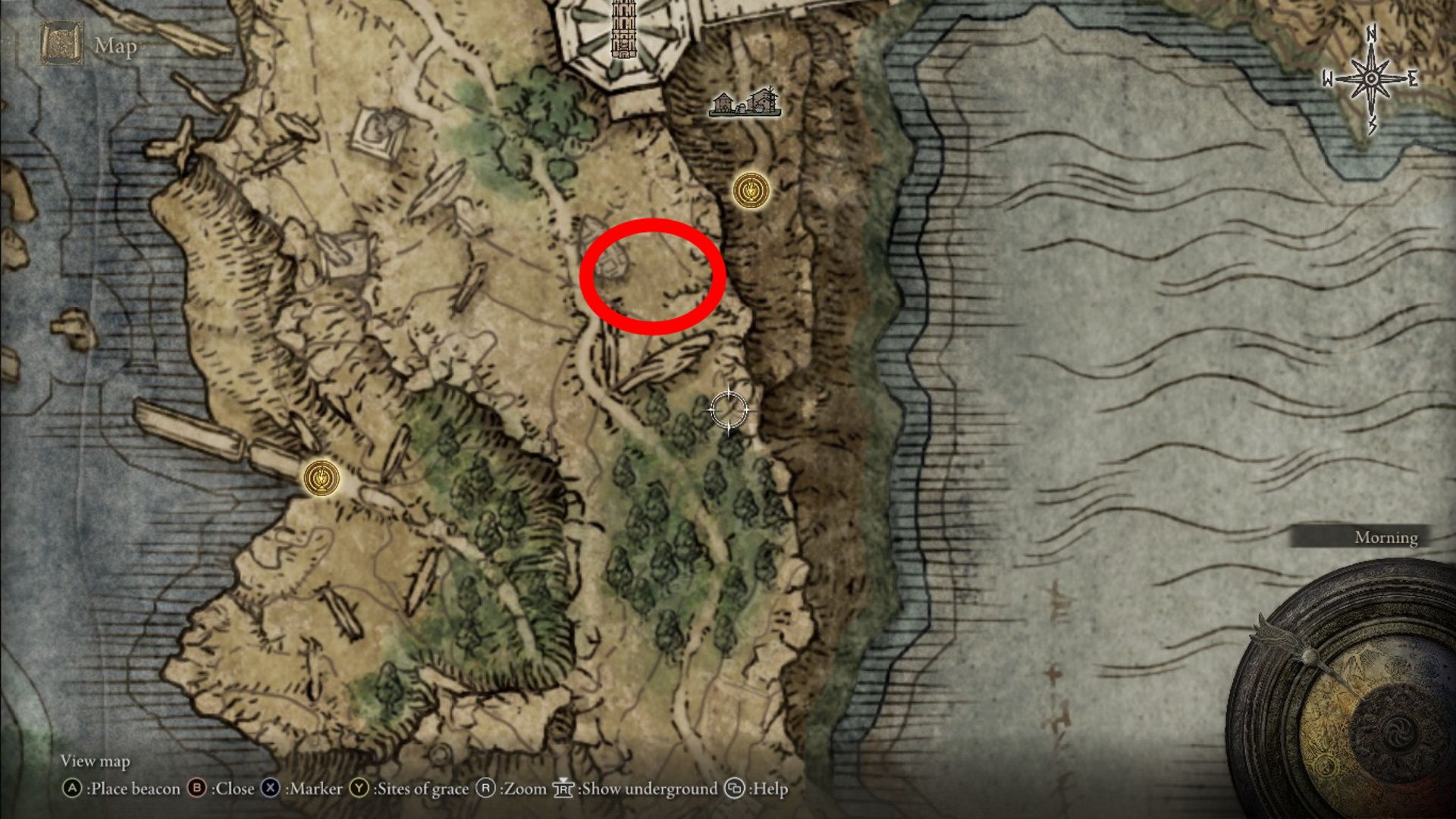 Alexander’s next location is in eastern Liurnia, south of Carian Study Hall, near where you fought the Tibia Mariner. He’s stuck once again, but this time, you need an Oil Pot to free him. The recipe comes from a book you purchase from the merchant in Siofra River, and you can craft these with Melted Mushrooms.

Get behind Alexander again, use the pot, and he’ll give you three Exalted Flesh. 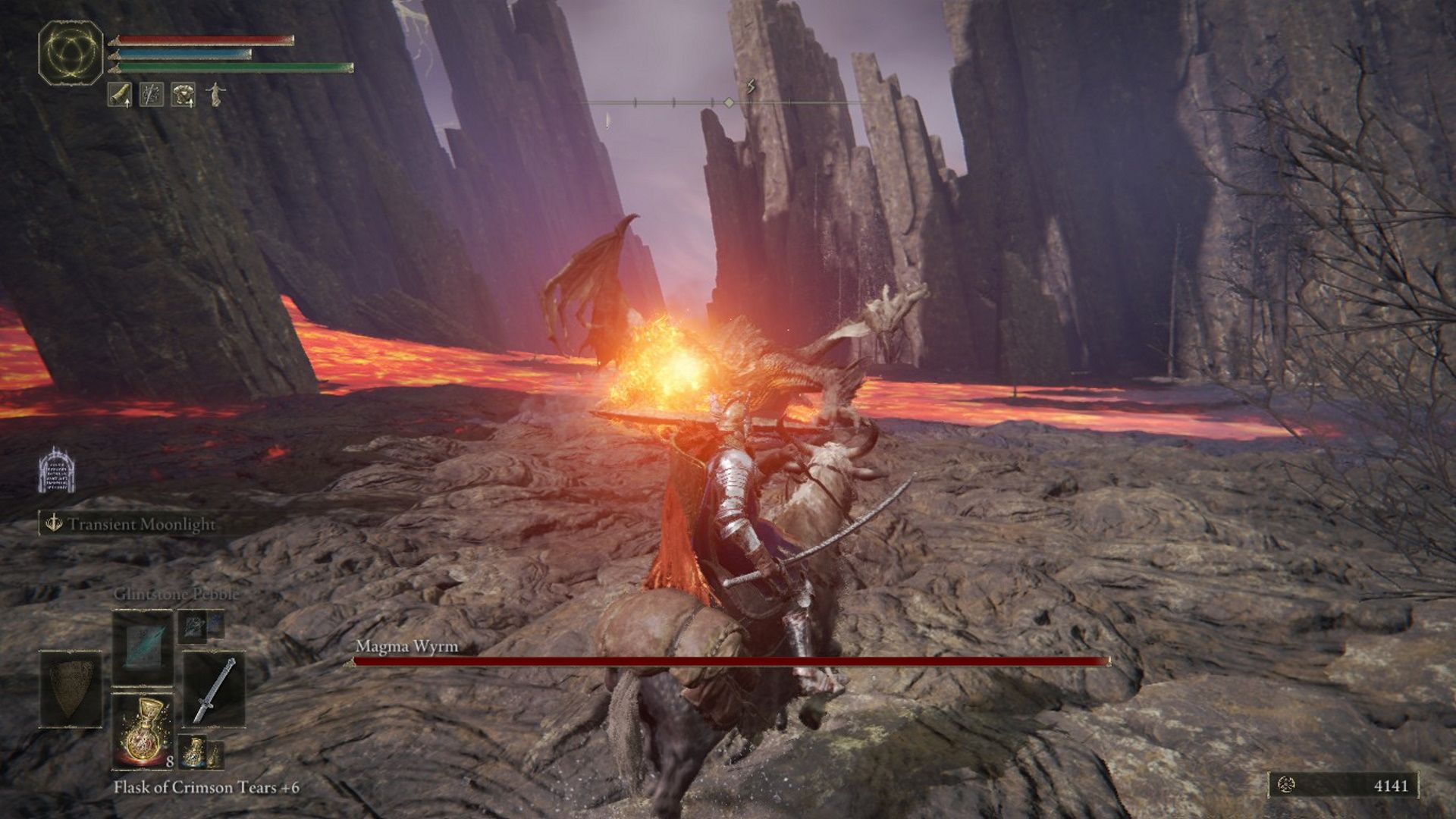 From the Wyndham Ruins in Altus Plateau – where you fought the Tibia Mariner once again – head north through the canyon, avoiding the volcanic vents which spell instant death for you. You’ll wind up at the Seethewater Terminus Site of Grace, which is just outside Fort Laiedd.

Go towards the fort, turn left, and pass the Fire Monks. The path leads to a large pool of magma and yet another Magma Wyrm. Alexander is in the lava pool. Speak with him, and he’ll move on again.

How To Finish Alexander’s Quest In Elden Ring 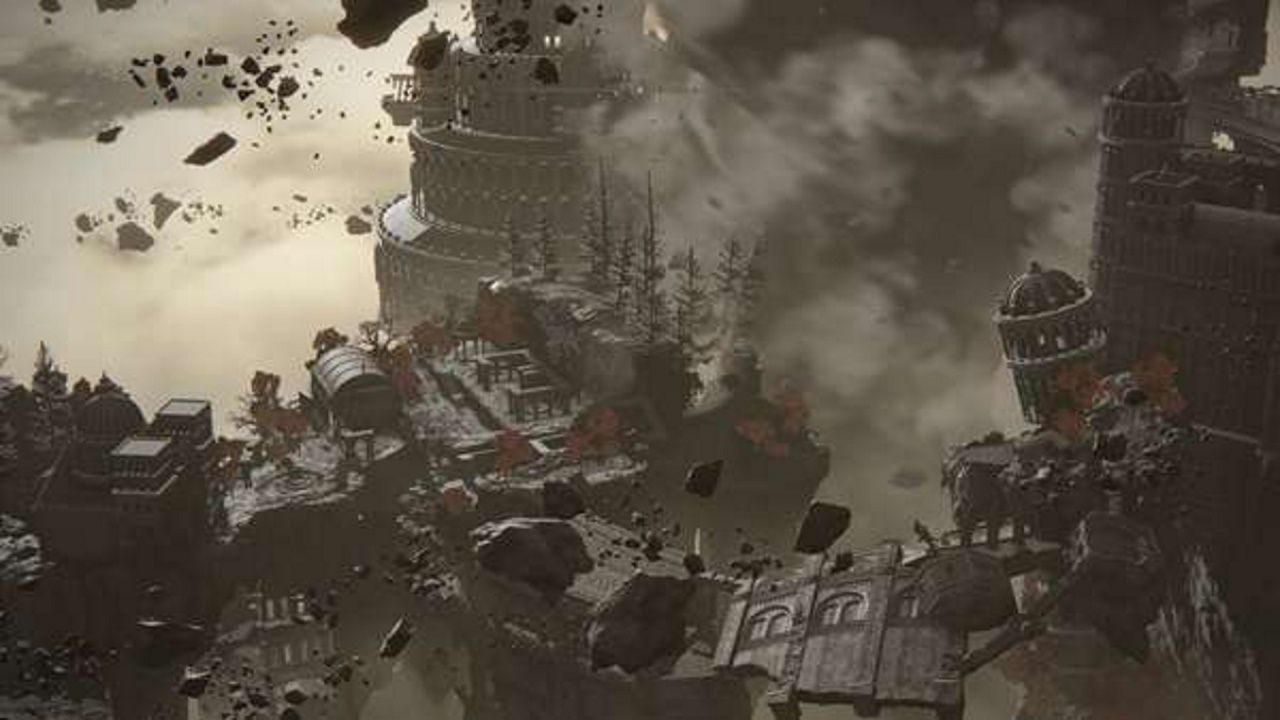 You can summon Alexander again during the fight against the Fire Giant, though it’s not required. The last step of his quest is in Crumbling Farum Azula. From the Dragon Temple Site of Grace, head into the doorway, take a right, then turn left down the stairs. You’ll eventually reach a crypt and the Dragon Temple Altar Site of Grace. Continue moving ahead along the path, and you’ll finally find a fog door that needs two Stonesword Keys to unlock.

Keep following the path. It eventually leads to an open area with a view of the burning Erdtree, and Alexander is sitting there waiting for you. He asks if you want to undertake his “ordeal,” which is fancy speak for challenging him to a battle. Note that doing this and winning means Alexander dies, so think carefully before deciding whether this is what you want.

When you’re ready, talk to Alexander again and tell him you want to fight. His moveset is similar to any other large pot warrior, so it’s a fairly straightforward battle. If you lose, you can continue challenging Alexander until you win. He thanks you with his dying breath, explodes, and you get two items for your trouble:

Once Diallos leaves Volcano Manor, you can visit Jarburg – a village on the road underneath Carian Study Hall – and speak with the small jar child to start his quest. At the end, you’ll give him the Innards, and after reloading the area, he’ll drop the Jar Companion. This talisman increases the power of all pot items.

Related posts:
03/19/2022 News Comments Off on Elden Ring: How To Complete Alexander, The Iron Fist Questline
Hot News
citalopram pizotifen
10 Best Co-op Games On The DS & 3DS
The Biggest Gaming News For May 18, 2022
League Of Legends: Everything You Need To Know About Challenges
How optimized object recognition is advancing tiny edge devices
Recent Posts