Like many other enemies in Elden Ring, you'll come across multiple variants of gargoyles. Some in the form of bosses behind fog walls or mini-bosses in the open world. You can find Black Blade variants, regular mini-boss gargoyle, and a duo-gargoyle boss room in Siofra Aqueduct.

There are quite a lot of variants of gargoyles. They all have similar movesets as they are the same type of enemy. During your journey, you will face many Black Blade gargoyles and regular ones. Defeating them should be more or less the same experience except for the duo boss fight. This battle within Siofra Aqueduct will probably be the hardest. Below is a detailed examination of this boss fight, from explaining attacks to the best way to defeat them.

All gargoyle enemies are optional. 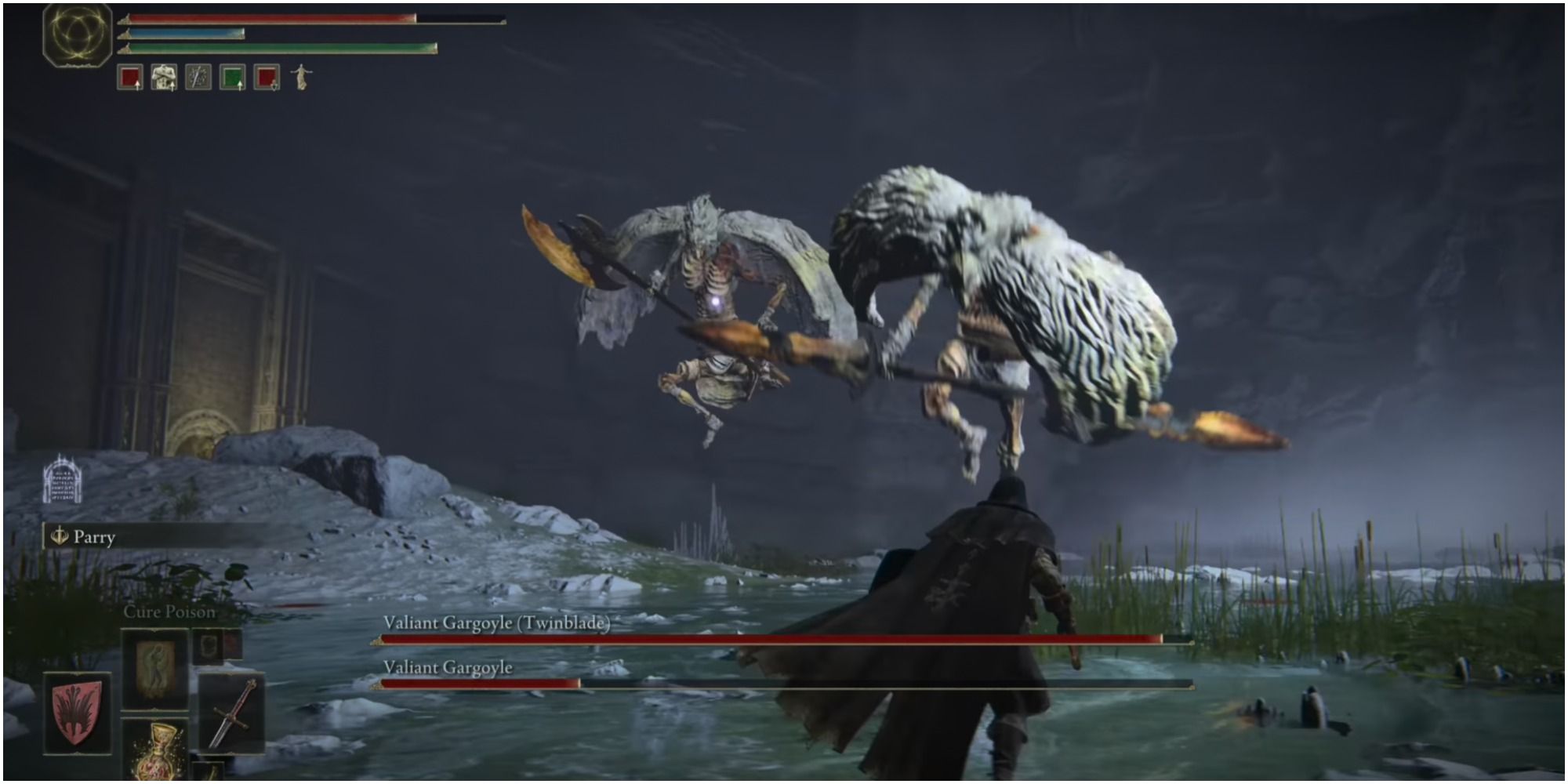 D's twin brother is a possible NPC summon for this boss fight. He is the strange and quiet NPC found sitting just before the fog gate. You can only find his summon sign here once you've given him the Twinned armor set. To collect this armor set, you must either kill D when you first meet him in the Roundtable or complete his quest.

When defeated, a coffin within the Waterfall Basin can be used to teleport to the Deeproot Depths. The bosses will drop Gargoyle's Greatsword and Gargoyle's Twinblade. 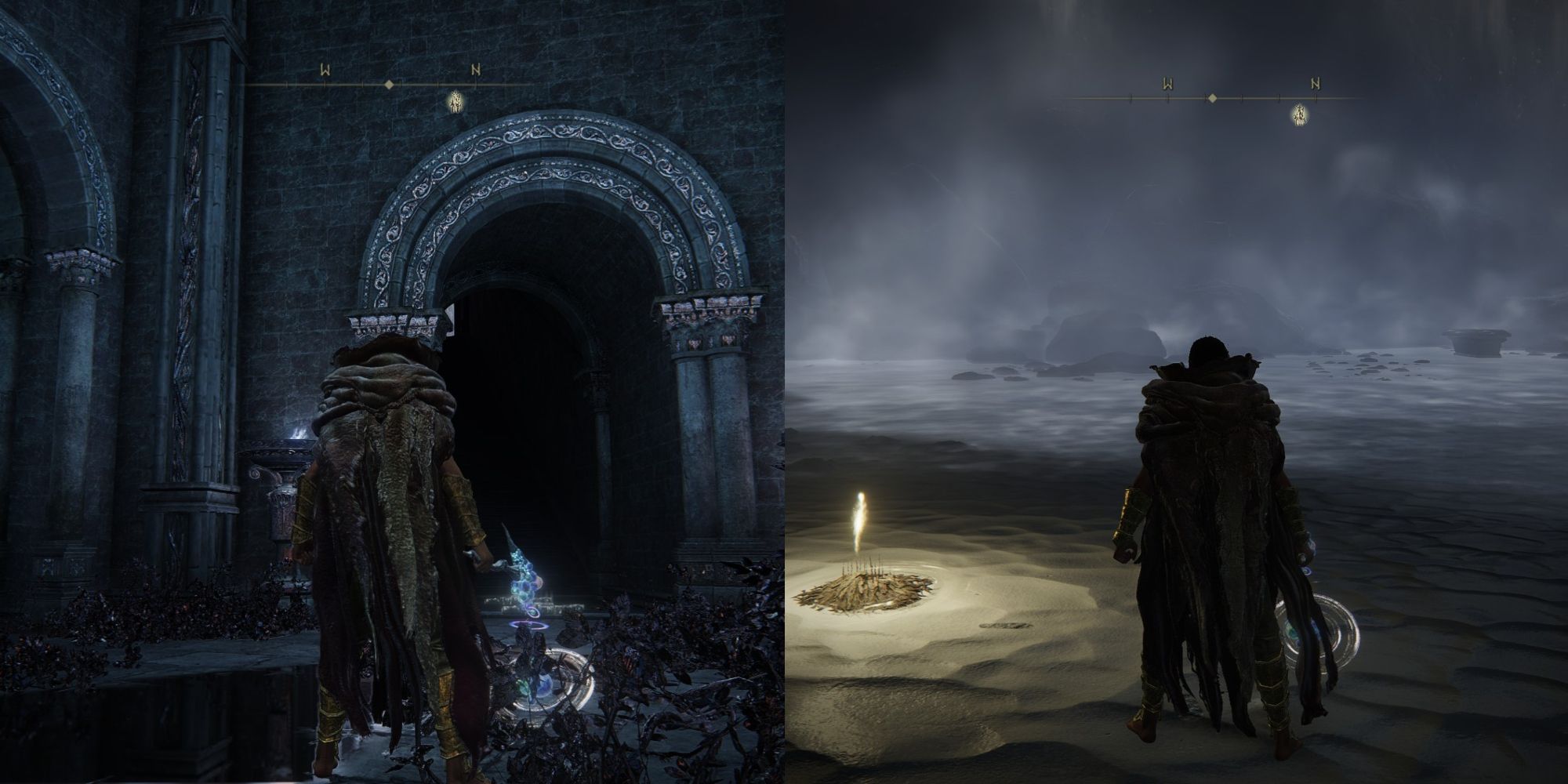 The gargoyles will spit poisonous mist at you that can get you if you get even a little bit close to it. Make sure to have either the Cure Poison incantation available or the crafted item Neutralizing Boluses to instantly cure any poison build-up status effect.

Cure Poison can be purchased from Brother Corhyn.

Neutralizing Boluses can be bought from a Nomadic Merchant or with the Medicine Peddler's Bell Bearing. Alternatively, it can be crafted with Herba, Great Dragonfly Head, and Cave Moss if you have the Armorer's Cookbook (2).

Changing Weapons: Both gargoyles will switch weapons periodically. When they perform this, there will be a short spark of light to indicate that they are switching. They will then swing their new weapon a ton, making it hard to deal damage at this time if you're melee.

Counter: Pay attention to the weapon in hand and play defensive. Stay back or use a shield when a gargoyle is switching weapons.

Poisonous Mist: Both gargoyles will periodically release a poisonous mist that will instantly kill you with Poison build-up. The main gargoyle spits the poison in a straight line. The Twinblade spits it in a circle around its feet.

Counter: You're able to notice their head lower and mist come out in time to run away. Run away as fast as you can each time. There's no hope in staying nearby due to the deadly build-up if you're anywhere near it.

Sword Slice: The first gargoyle has an axe and a sword it switches between. With its sword, it will sometimes raise it above its head. The creature will then slam it down, creating an energy slice forward.

Counter: Dodge left once it slams.

Tornado Spin: The Twinblade gargoyle will start spinning its twinblade, go into the air with a whirlwind, and then dive.

Counter: Remove target lock so as to not get disoriented. Prepare yourself when this happens and time when it dives toward you. Roll away or hold up a strong shield when the creature is about to land.

Air Strike: If the gargoyles, or rather any enemy in the game, flies into the air, they are about to dive into you.

Counter: You can roll sideways. You may also roll underneath the enemy once they start diving forward to end up behind them. 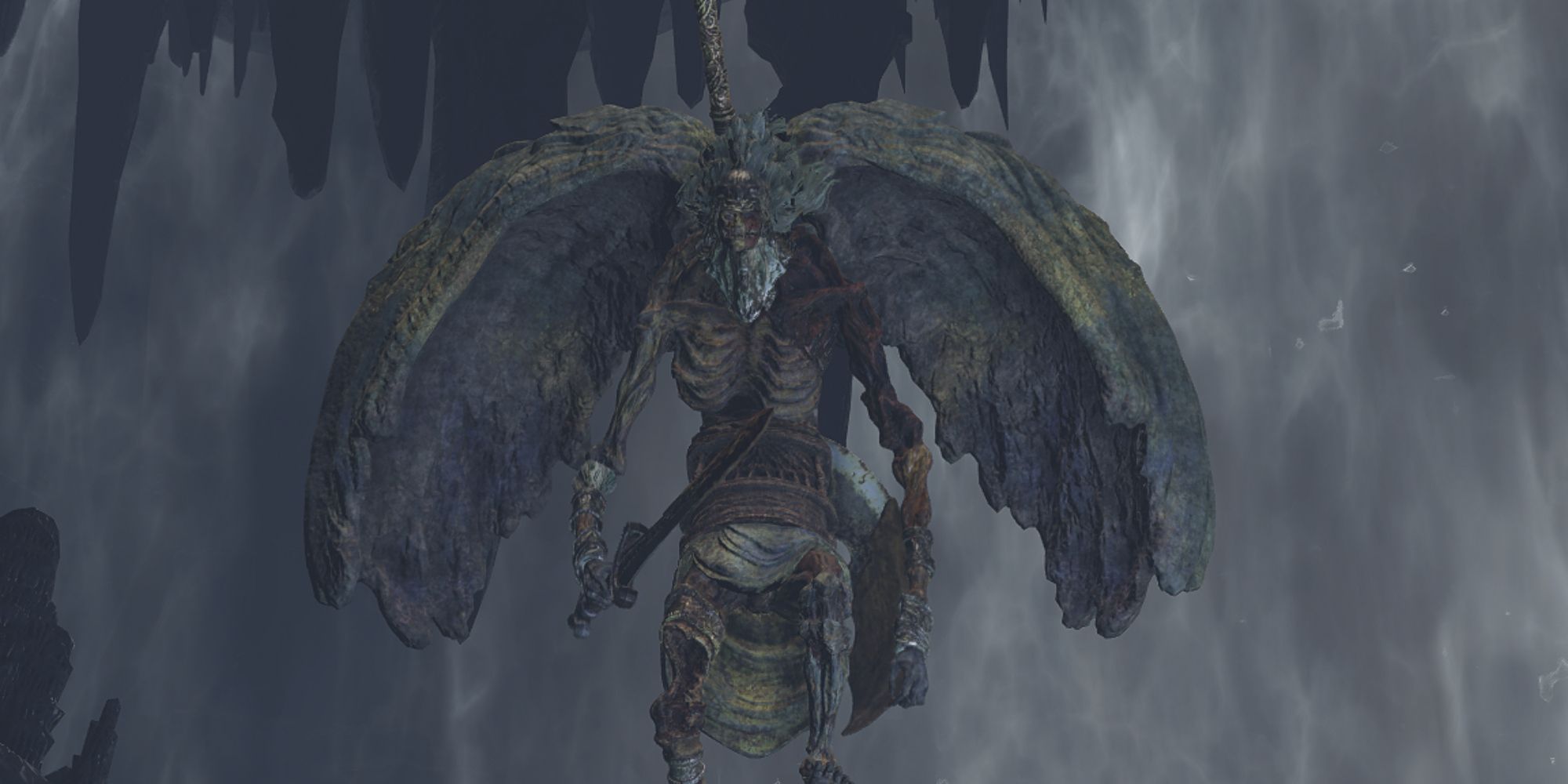 You will need to have a lot of patience with this fight. Duo boss fights are aggravating as is, but these guys will have you stumped greater than when you took on Starscourge Radahn. There's no defeating these bosses fast unless you're returning at a higher level with better damage.

The Spirit Ash you summon needs to be tanky, or it will get obliterated. Some strong and tanky ashes are Ancient Dragon Knight Kristoff (Sainted Hero's Grave) and Lhutel the Headless (Tombsward Catacombs). We have a guide on the most powerful Spirit Ashes you can find in Elden Ring. Remember to upgrade your Spirit Ashes using Roderika at Roundtable Hold.

With another player, they should survive until the second boss if not up to the very end of the fight, so you won't have to worry about being overwhelmed by two. Always let the second player or the ash aggro one while you deal with the other.

If you're soloing this boss fight, you have to have great spacial awareness. While you're attacking one gargoyle, always be aware of where the other is. If you're not paying attention to the second one's location, you'll run into its poisonous mist or get attacked and instantly die.

If you do not have good dodge-roll timing and a fast sword, this entire fight will have to be played defensively. Whether you're a mage or a knight, a strong shield will help you greatly if you have trouble rolling on time and making distance. With a strong shield, you can keep your position and wait for an opening without taking much damage.

If you're not a mage that needs distance, and you have to get close and personal with the boss, try rolling into its feet and behind the boss when trying to evade general attacks. General attacks like swings and slams can be helped this way. If you have a fast weapon, even better. Keeping at one gargoyle's feet and tanking the boss will be easy.

Of course, this doesn't found for wide berth AOE damage like when the Twinblade gargoyle does a tornado spin. There will definitely still be instances where you must run and defend. Those instances are when this gargoyle starts spinning his twinblade and leaps into the air, and the moment both gargoyles release a poisonous mist. These are the two deadly attacks that all players should run and hide for. Another dangerous attack is when the twinblade gargoyle shouts. A white aura will surround it. When this happens, the gargoyle will start swinging frenetically. It's best to step away and let lit get its anger out.

As a mage, you may want to use fast sword spells like Carian Piercer and a medium shield since it will be hard to stay safe and take time casting spells, most especially when the second gargoyle spawns. When the gargoyles switch weapons, you'll have an opening to unleash spells.

If you're using a shield, make sure you have your Stamina leveled up. Alternatively, you can equip the Green Turtle Talisman or Viridian Amber Medallion to have increased Stamina. Blocking consumes Stamina, so you'll want some left over for your attacks and spells.

No matter what strategy you choose, keep the second gargoyle (Twinblade) at a safe distance as you finish off the first one. The first one will already have low health since you started fighting it at the beginning. If you try to teeter between both, the fight will last longer and become more difficult. The Twinblade gargoyle is the hardest, so take the other one down first. Be defensive with the twinblade until you can have some one-on-one time with it.

Depending on what your play style is, you should adjust your Flask accordingly. If you tend to inflict a specific type of damage like Fire or Lightning, make sure to use those Crystal Tears. You can find Crystal Tears that boost stats. Depending on your build, equip a Crystal Tear that will boost your Intelligence, Strength or etc damage.

As always, as a last resort, you can always switch to a Bleed build. Allowing a deadly status effect to build up and tick down one boss's health away while you deal with the other will greatly help.

Related posts:
06/15/2022 News Comments Off on Elden Ring: How To Defeat Valiant Gargoyle
Hot News
Marina Probably Won’t Be The Villain Of Splatoon 3
walkers pharmacies
Skull & Bones Will Reportedly Be Re-Revealed Next Month
Source Of Madness: How To Play As A Generalist
Report: 66% of AI decision-makers are concerned about meeting ethical business goals
Recent Posts