Vampire: The Masquerade Bloodhunt is another to join the long list of free-to-play battle royale titles. It has proved popular with players, earning praise for some of the innovative mechanics that it brings to the table.

The bread and butter of the game are the classes, known as archetypes. A lot of new players will no doubt want to figure out what is the best archetype, and even though it also comes down to preferences, there are clearly some classes that come out on top. 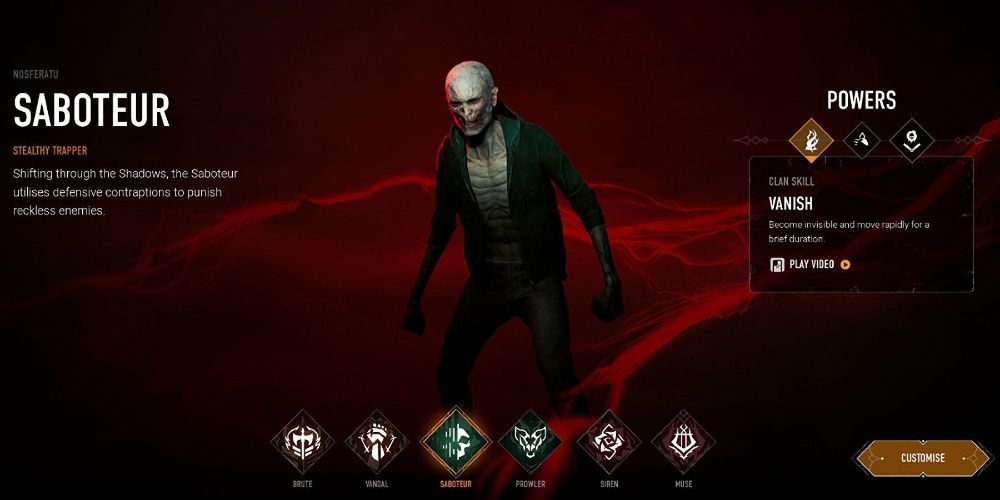 The Saboteur is one of the Nosferatu clan archetypes, and shares the Vanish clan power with the Prowler archetype. Vanish allows you to turn invisible for a few seconds with increased movement speed. Your passive gives you semi-invisibility when crouching and standing still. Do keep in mind that a good player will usually spot you with ease, though. Your second main ability is a Sewer Bomb that you can throw, and whenever an enemy approaches it will detonate into a cloud of deadly gas.

Overall the Saboteur is the weakest out of all the archetypes, primarily due to how lackluster the Sewer Bomb is during an actual fight. The fact that enemy players are highly mobile means that they can quickly exit the poisonous gas and escape. 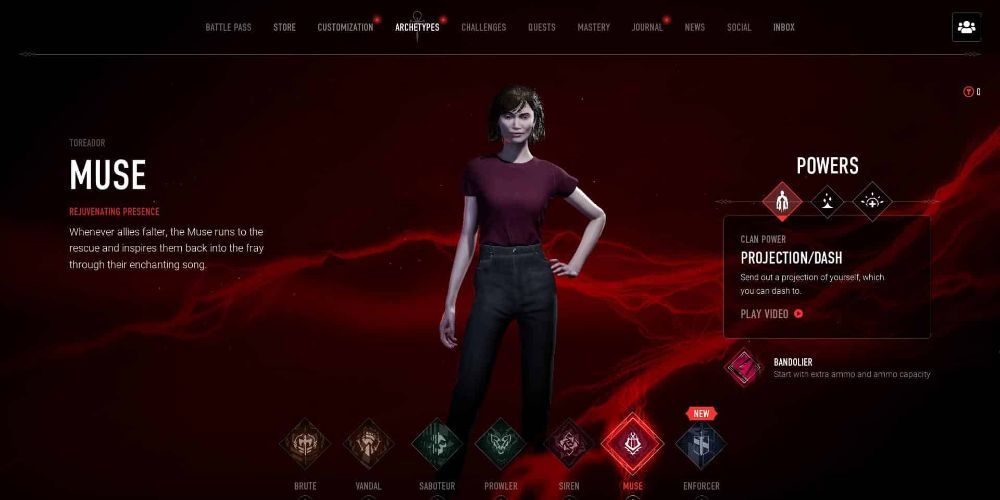 Part of the Toreador clan, the Muse is a support character that truly shines when played in a team. The clan power Projection Dash enables you to send a projection of your character forward, and you can then quickly dash to that position. This ability works well as a distraction, too. The Muse's passive power, Final Act, will refresh all your cooldowns once you're downed, while also allowing you to use them. Rejuvenating Voice is the archetype power, healing both you and your allies as long as you don't use other abilities or deal damage.

A pretty weak archetype for solo play, the Muse truly shines when used in a well-coordinated team. If you're a fan of playing healer classes, then the Muse might be the perfect fit for you, even though healing is not that scarce in this game. 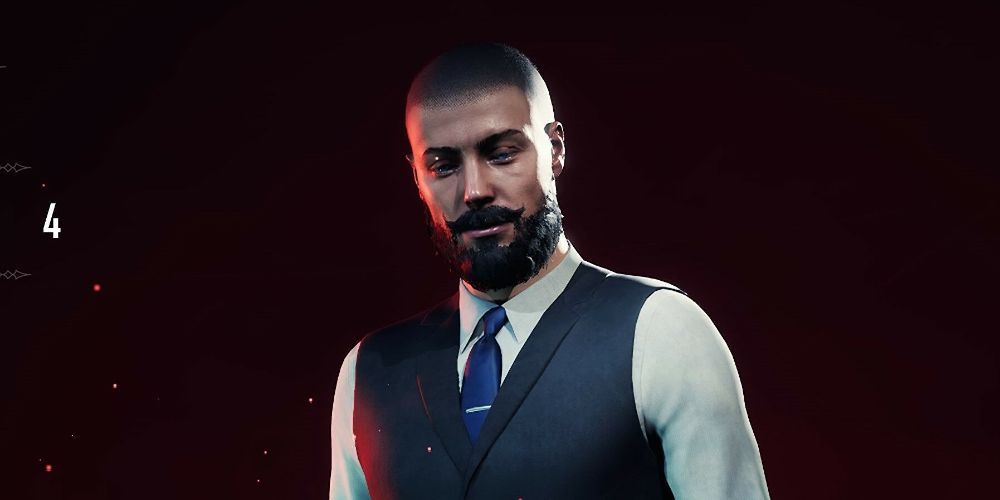 The Enforcer is a tank that excels in close-ranged combat. Flesh of Marble, the clan power, makes you invulnerable for a few seconds, as long as you don't use other abilities or attack. Sadly, the passive power is pretty weak, slowing nearby enemies and alerting you to their presence. While that sounds cool on paper, the reality is that most people will simply avoid getting too close to you, making this passive mostly useless. Your archetype power, Unyielding Charge, sees you rush forward while dealing moderate damage and silencing your enemies.

This archetype is decent, but requires a lot of practice. Knowing when to turn invincible can prove tricky in the chaos that ensues during combat. The lack of mobility will also hurt, especially when trying to run from a Prowler or any of the Bruja archetypes. 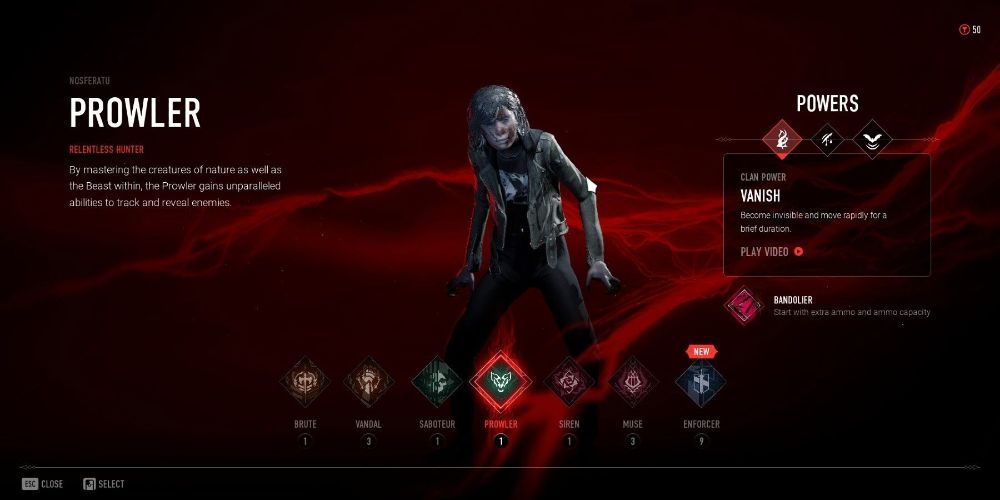 A distant cousin of the Saboteur, this Nosferatu archetype also uses Vanish as its main ability. A natural hunter, the passive Sense the Beast will reveal the position of any gravely wounded enemy in the vicinity. This is one of the best passives in the game, since no one can really run from you as long as their HP is low. The Scouting Famulus power will send a swarm of bats to a location, revealing any enemy that steps into the radius. It's a decent ability that allows you to cover your back or one of your flanks, and proves especially useful towards the end of the game when other players have less room to avoid it.

An excellent combatant with the ability to escape a sticky situation or mercilessly chase down enemies, the Prowler is best played in solo games. Its abilities don't really add much to a team game, since your odds of fooling a team of three with your Vanish isn't that great. 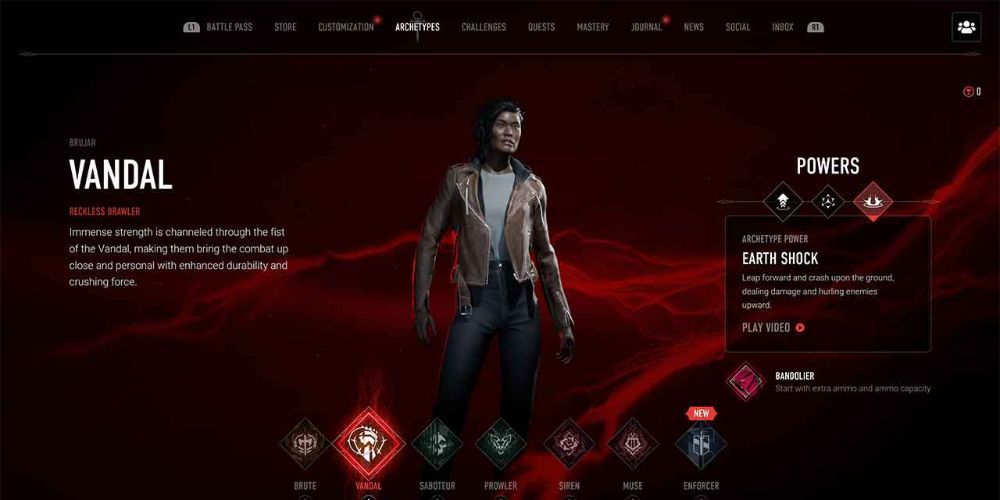 Part of the Brujah Clan, the Vandal is a very aggressive archetype that feels right at home in the thick of combat. Your Soaring Leap ability allows you to leap great distances, making it a valuable skill when chasing down enemies or when trying to escape a bad fight. Your passive, Adrenaline Rush, gives you damage resistance when in close proximity to an enemy, while also indicating when other players are near. Your last ability, Earth Shock, gives you a quick air dash, followed by a slam attack that will stun and damage your enemies.

One of the stronger archetypes, the Vandal can make quick work of any enemy foolish enough to get close to you. With the added mobility that both your active powers offer, chasing down enemies will prove a lot easier when compared to other archetypes. 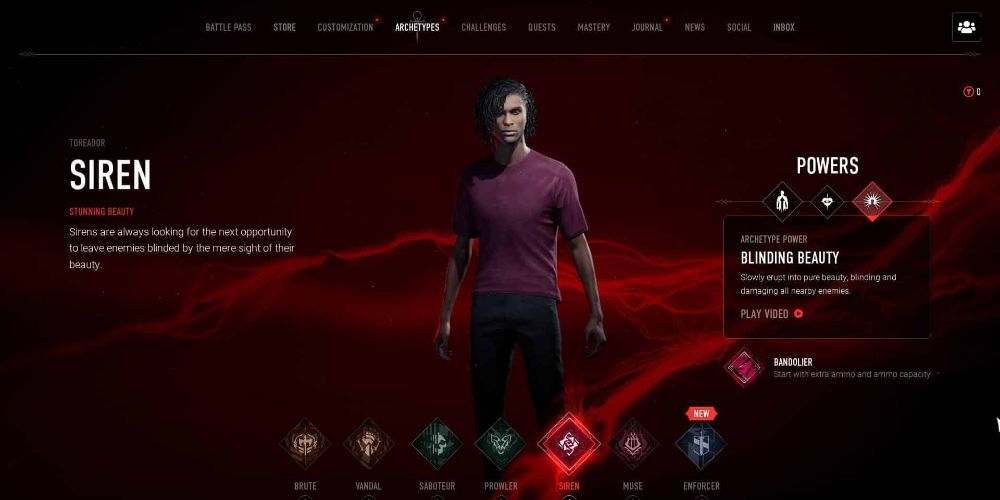 The second Toreador clan archetype on this list, Sirens excel at mid-range combat. Alongside Projection Dash, your Kindred Charm passive will charm civilians, making them friendly towards you. This can help you fool an enemy into killing a civilian, revealing them to the entire map. Blinding Beauty is the Siren's last ability, and is essentially a close-range flashbang that also deals a small amount of damage.

By combining your two primary abilities you can get up-close to an enemy, flash them, and then make quick work of them. If you find yourself on the back foot, flashing your enemy and quickly dashing will make for an efficient escape. 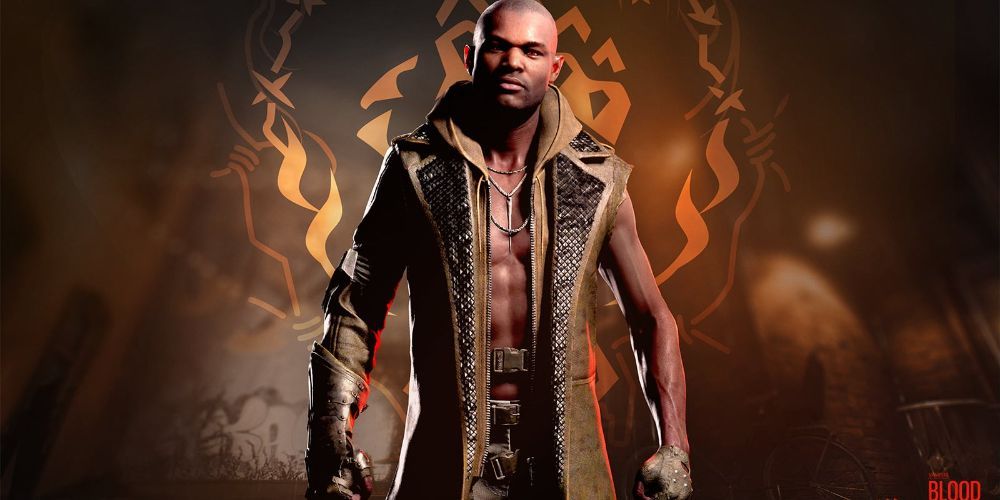 By far the best archetype in the game, this Brujah clan archetype revels in chasing down enemies and winning firefights with ease. Besides the Soaring Leap ability, your True Grit passive True Grit will heal half of your HP when not in combat. Shockwave Punch is your last ability, throwing out a powerful punch that will deal a small amount of damage to enemies hit, while blocking all bullets within its radius during the travel time.

When properly used, both of the Brute's abilities allow you to engage with ease and win most firefights providing you land your Shockwave Punch correctly. Your passive is easily the best in the game, giving you a clear advantage in prolonged fights.

Related posts:
05/12/2022 News Comments Off on Every Archetype In Vampire: The Masquerade – Bloodhunt, Ranked
Hot News
PlanetScale announces new database analysis and performance features
Destiny 2 Brings Back The Leviathan In Season Of The Haunted
Sony Isn’t Honouring Stacked PS Plus Discounts In Asia
Desinty 2: Season Of The Haunted – everything you need to know
tribulus creatin muskelaufbau
Recent Posts