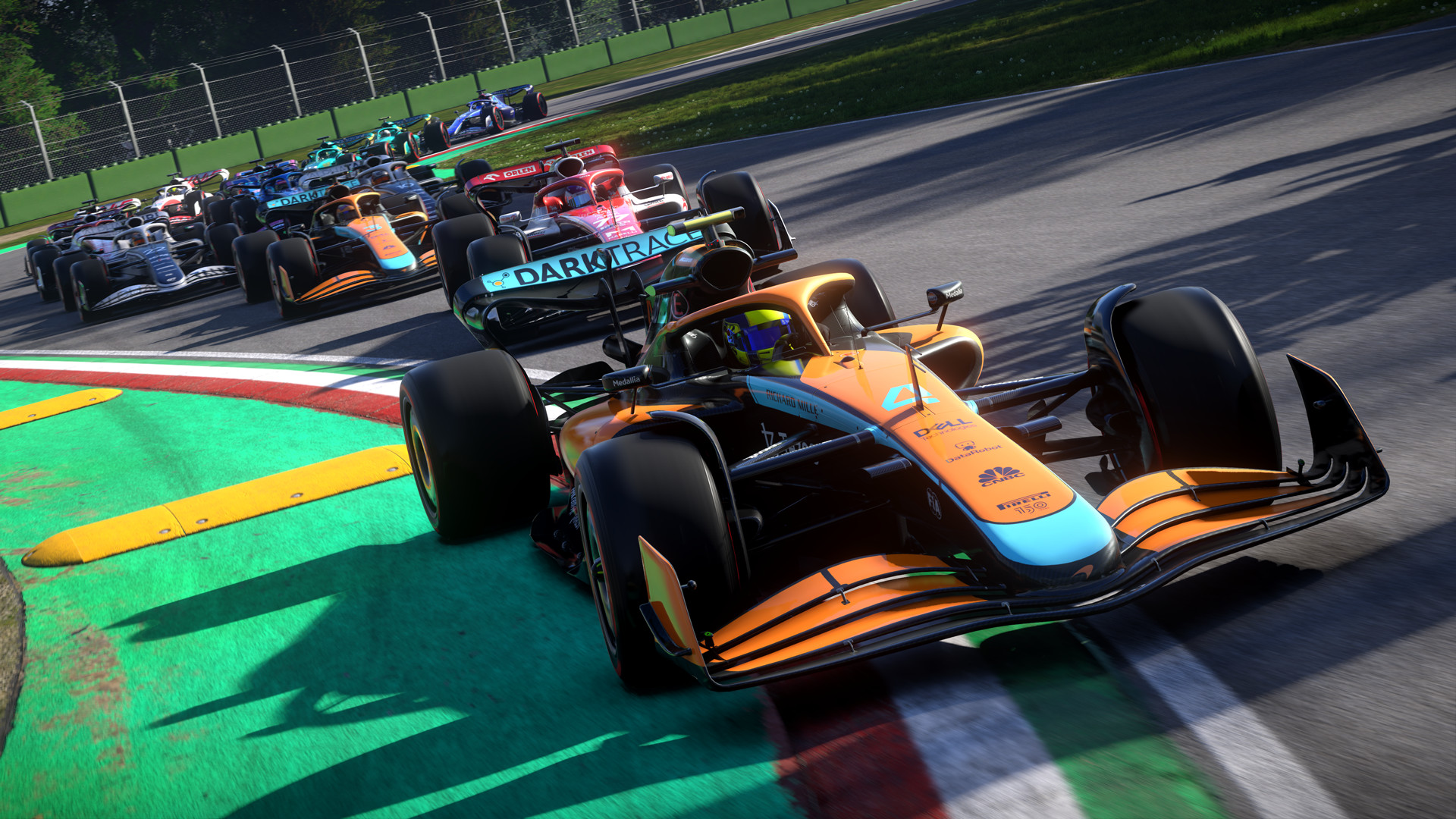 As skilfully constructed as ever, F1 22 recreates this year’s new crop of F1 cars – but it also introduces the microtransactions-led F1 Life.

Formula One has lodged itself firmly in the limelight this season, with new technical specifications spawning gorgeous-looking cars that compete much more closely than in recent years. A burgeoning rivalry between Red Bull’s Max Verstappen and Ferrari’s Charles Leclerc, and a calendar filled with more races than ever, has led to one of the most exciting years in a long time. The video game tie-in hasn’t seen quite so many drastic changes but one in particular would’ve been better off if it had never happened.

We’ll get to F1 Life in a moment but other than that F1 22 introduces an impressive raft of tweaks and improvements. The new regulations have meant that Codemasters has had to put in some significant unseen technical work: this year’s cars use larger wheels fitted with lower-profile tyres, which means that the game’s tyre model – from which much of the cars’ feel derives – has had to be completely reworked.

It’s a testament to the developer’s technical skill that when you play F1 22, it in no way feels as though one of its core elements has been ripped out and replaced. Instead, you instantly feel the difference between this year’s cars and last year’s ones; they are heavier and infinitesimally slower as a result, but also feel more planted, with more mechanical grip and, like their real-life counterparts, less propensity to slip and slide when you get into the slipstream of the car in front. They feel like how you would imagine the real-life cars do: eminently raceable.

F1 enthusiasts will welcome the changes but they are likely to look on F1 22’s most significant new element with considerable disdain. F1 Life has been introduced as a means of letting you experience a taste of the lavish lifestyle of a Formula One driver. It gives you a flashy virtual apartment which you can deck out with expensive furniture and decorations, and lets you buy virtual clothing and accessories, made by real brands, for your driver’s avatar.

It’s exactly the sort of thing that doom-mongers predicted would be introduced to the game after EA bought Codemasters last year, but in truth it could be worse. At least it doesn’t subject you to lootboxes containing random items: instead, it introduces a currency called Pitcoin, which you can buy using real money. Sure, the game rewards regular play by giving you Pitcoin for free, but unless you’re the sort of person who spends half your waking hours scrolling through Instagram feeds, you’re likely to view it as a cynical means of introducing microtransactions to a full-price racing game.

The good news is that F1 Life has no impact on the single-player content at all, it really is just cosmetics for showing off in the online lobby, so if you don’t care about all that then you’ll barely know it exists. It’s all very distasteful but if it’s the thin end of a wedge, to be widened in subsequent years, at the moment it’s easy to ignore.

Away from F1 Life, the general background level of realism has been ramped up, with between-the-action interludes that impressively mimic Sky’s F1 coverage. Small but significant tweaks to the racing abound, such as judicious reworking of the testing programmes which earn you points to spend on upgrading your car – the track acclimatisation programme has been improved visually, and in the fuel management programme, a clever new graphic shows how light your right foot is.

In the real world three tracks have been slightly reconfigured for this season, and those changes are replicated in F1 22, which also includes the new Miami track. New timing mini-games help you pull off the perfect starts and pit-stops, and the My Team mode, which introduces a team management aspect by casting you as driver and team owner, now has three potential entry points: Newcomer, in which you start from scratch; Challenger, in which you take over an established midfield team; and Front Runner, which puts you in a top team straight away. It’s a clever means of subtly changing the type of gameplay that My Team provides.

There are plenty of Challenges and Time Trials – you can even pilot the two official safety cars in the latter – and racing game novices have been catered for with a new AI mode which basically blunts the skills of the drivers against whom you compete. At the other end of the scale, F1 22 feels impressively simulator-like if you turn off the driver aids, especially given that in graphical terms it is sumptuous. There’s no story mode this year, though. Codemasters promises it will return next year, but few, we suspect, will miss it that much.

Online, gamers with different consoles made by the same manufacturer can compete against each other, and Codemasters hopes to bring full cross-platform online play via an update after launch. Plus, this is the first F1 game that can be played on a VR headset. Thankfully, though, Codemasters hasn’t replicate the ‘porpoising’ juddery bouncing that has afflicted some of this year’s cars, which would have induced nausea in combination with VR.

As we’ve come to expect from Codemasters, F1 22 is a fantastic game – as a pure mainstream racing game, it’s at least as good as anything else out there. F1 fans will love its depiction of this year’s cars and for many, that alone should provide justification for buying this year’s iteration. However, it’s a shame that EA’s rapacious desire to introduce microtransactions to all its games has seeped into even this venerable and beautifully crafted franchise.

In Short: Brilliantly replicates the thrill of driving this year’s F1 cars and even the cynical F1 Life, and it’s awful microtransactions, can’t spoil the excitement.