Like any MMORPG worth its salt, Final Fantasy 14 has received massive content updates on a regular basis since launching in 2010. New quests, regions, weapons, and raids are usually the main draw of these updates — but Square Enix has also introduced new emotes into the game, too. The super-cool Wall Lean is one of the more popular additions, but it’s surprisingly difficult to obtain.

If you want to channel your inner Tower of Pisa, the first step is to unlock the Ishgardian Restoration by completing the “Litany of Peace” quest and reaching level 60. Once that’s done, you’ll need to accept another quest called “Towards The Firmament.” This can be found on the recruitment board at Foundation.

However, in order to finish all the quests necessary for the Wall Lean emote, you’ll also need a crafting/gathering job to be at least level 20. This will allow you to collect/create material that can be traded for Skybuilders Scrips, a currency required to buy the emote.

On your crafting/gathering logs, go to the Special Recipes menu and navigate to the Ishgard Restoration section. This will list all the items that can be traded in for Scrips — the higher the quality, the more Scrips you’ll earn when trading them to Potkin. 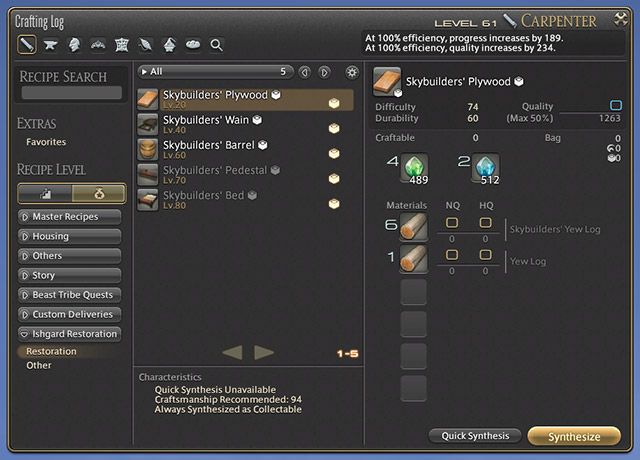 After you’ve made 1800 Scrips, go over to Enie — also located in the Firmament — and buy the “Ballroom Etiqutte – Winsome Wallflower” reward. Now just open your inventory, use the item, and you’ll unlock the Wall Lean emote.

That’s a lot of work for one emote — reach level 60, complete a quest, reach level 20 in a crafting/gathering job, then earn 1800 Scrips. Of course, it’s all worth it when you take advantage of your new emote for the first time, and join the other cool kids who are leaning up against a brick wall.

Final Fantasy 14‘s most recent expansion was Shadowbringers, which launched late last year. However, Naoki Yoshida — FFXIV‘s Game Director — says the team is already working on the next big update. Fans are speculating that it won’t come out until next year, and Square Enix is adding fuel to the fire by staying quiet on the matter. Every expansion for the game has been well-received so far, and players have high expectations for whatever comes next.

Related posts:
02/26/2020 News Comments Off on Final Fantasy 14: How To Get The Awesome Wall Lean Emote
Hot News
Fallout London mod looks so good Bethesda headhunted its developers
2022 is the worst year for video games ever – Reader’s Feature
Moo Codes For June 2022
New Cult Of The Lamb Trailer Highlights Best Practices For Keeping Your Cult Happy
Gamedec: How To Find Fredo
Recent Posts