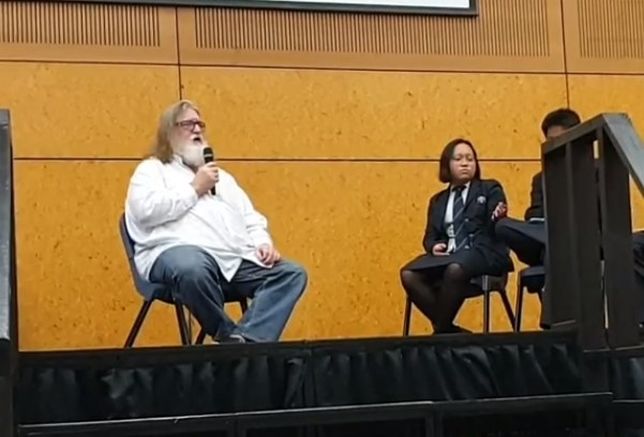 The head of Valve has given a cryptic reply to the question of whether any of the company’s PC games will be ported to consoles.

Go back 10 or so years ago and Valve were being described as the Pixar of video game developers. But nowadays many people may not even realise that the company that runs Steam even makes its own games.

The only reminder of that fact in recent years has been Half-Life: Alyx, which only a tiny number of people have played because it not only needs a powerful PC but also an expensive VR headset.

However, Valve boss Gabe Newell may have hinted about the game, and others, coming to consoles, during an interview at a local school (probably in New Zealand, although it’s not clear) where he was asked whether Steam will be porting any games to consoles.

The audio is frustratingly unclear, but his answer seems to be, ‘You will get a better idea of that by the end of this year, and I don’t think the answer is what you’d expect.’

The only thing you can easily make out is the ‘Ooh!’ of excitement from the crowd, although you can also see Newell prepare himself before he answers, apparently knowing full well that what he’s about to say will provoke a reaction.

There are two obvious questions here: which games and what formats? Half-Life: Alyx is the only traditional(-ish) game Valve has released in a decade and it’s hard to imagine the likes of Dota 2 working on a console – although it’s not impossible that Valve could be creating a special console edition.

Which formats he’s talking about is just as difficult to guess, especially as Newell says the answer is not one fans would expect. The obvious answer would seem to be a team-up with Sony, who Valve has worked with before and who recently annouced a next gen VR headset that would be perfect to demonstrate with Half-Life: Alyx.

Whether that means it’s actually Microsoft, or even Nintendo, depends on what Newell thinks other people would find unexpected. He has publicly favoured the Xbox Series X over the PlayStation 5, so perhaps Valve might be helping Microsoft with an unannounced VR headset?

Given how few games there are to port perhaps Valve is working on a number of new, unannounced titles to be revealed this year?