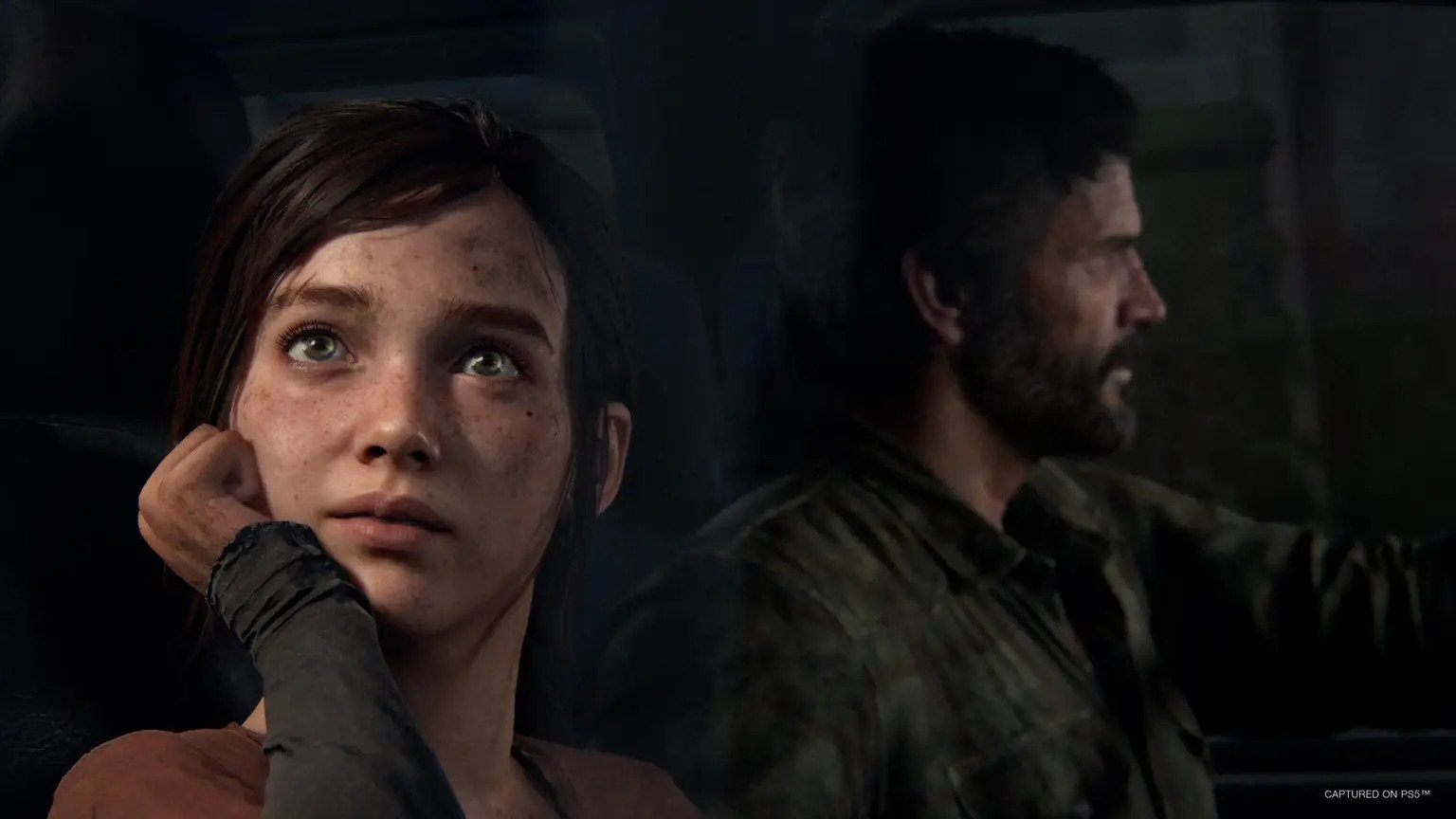 The Wednesday letters page thinks Pokémon Scarlet/Violet should be left for Switch Pro, as one reader asks about AI: The Somnium Files.

The asking price
I’m not really sure I understand what anyone means by The Last Of Us Part 1 being a cash grab. That strikes me as one of those phrases, like ‘hot take’ that the internet has rendered completely meaningless, but surely it refers to something cynically produced, at very little cost to the creators, to take advantage of a particular fad or group of fans?

The first thing that seems obvious is that The Last Of Us Part 1 was not cheap. It’s being made from the ground up and is clearly very expensive, as you can tell from the trailer and how long it’s taking.

I don’t see that there’s anything cynical about it either, it’s just a remake, of which dozens are produced a year, and it’s clearly being produced for a specific purpose of tying into the new TV show. You could argue that’s taking advantage of a fad but that seems to be a fairly reasonable thing to do. Sony want the game to make a good impression and yet the original is a nine-year-old PlayStation 3 game – not a great introduction for non-gamers.

What fans are more angry about is the price, which I agree is high, and the fact that there’s no sort of discount if you already own the original, which I think is unfair as this is a remake not a remaster.

Many people have argued that the remake doesn’t look different enough to the original but if that’s the complaint surely that means you’re missing out on nothing by not buying it? I wouldn’t argue the remake is a must-have, but I don’t see how anything about it is unfair. Frankly, I think people are just using the term cash grab to mean ‘thing I wish was free because I don’t want it enough to pay the asking price’.
Flaming Dice

Strange dilemma
RE: Anon. I echo your behaviour towards Game Pass. I both love it but also seem to be playing fewer games because of the overwhelming choice!

Not to say I have not downloaded a lot, but I have not played half of them at all and the majority I play for maybe 30 minutes before going back to the ‘safety’ of Halo Infinite. This year, the only games I have played really are Halo and Elden Ring. The latter the only game I have actually ‘bought’, as it is not on Game Pass.

Meanwhile, I have maybe a dozen games I’ve downloaded and not touched.

I love the Xbox Series X and Game Pass (more so now I have fibre optic broadband) but how I use it, is strange to say the least.

I work in behavioural economics so I might coin the phrase ‘Game Pass Dilemma’ for this phenomenon!
Brando

Audience led
I think it’s pretty obvious that Nintendo didn’t do a Direct because they want to focus on one game at a time, with each one getting its own show. Splatoon 3 will be next and I’d predict it’ll be announced any day now.

I’m not sure why they’d want to go down this route but it’s essentially the same thing Sony has been doing this year. They had a sort of E3 event, that didn’t touch on any of the big stuff, but otherwise their State of Plays have focused on just one or two games at a time.

I’m going to guess that both companies have got hold of data that suggests that this is better than having multiple games with only 30 seconds each. I don’t agree, as someone just watching them for entertainment, but if the new way gets more pre-orders that’s all they’re interested in.
KImbo

No change
With the debate about easy modes continuing on, I realised that there are some assumptions being made as to how they would work. For example, one of the main arguments against it being that the temptation to switch to an easier setting would prove too difficult to resist.

Apart from the fact that people should learn self control, the temptation would be lessened if changing setting meant starting from the beginning of the game.

50 hours in, players would probably not be willing to do that. At the start of the game? Maybe, but then perhaps the game shouldn’t start with such a hypothetical difficulty spike.
Joseph Dowland

Zero knowledge
I noticed that a game called AI: The Somnium Files – Nirvana Initiative was released recently. It’s by Kotaro Uchikoshi (of Zero Escape fame) so it should be right up my street, and I was surprised to find out that it’s a sequel to a game I’d missed entirely.

Have GC or any readers played either of the games, and would they recommend them to a 999/Virtue’s Last Reward fan? I’d be keen to pick them up for the Switch, but that idea might be humped unless I go digital.
Magnumstache

Biannual release
I’m still surprised every time I see a reminder that Pokémon Scarlet and Violet is coming out this year that it’s being released less than 12 months after Arceus. That game has been a huge hit and showed a way to evolve the series (pun sort of intended) in an interesting new way, but Scarlet and Violet just looks like… Sword and Shield with more open world.

It seems like something that could’ve easily been an expansion and yet it’s going to be the start of a whole new generation, while Arceus is relegated to being a spin-off. I’d say it would be justified if Scarlet/Violet had amazing new graphics, but they look just the same as before.

It’s a very odd decision all round and seems completely unnecessary, especially as it’ll take sales away from Arceus, which is still in the charts. All those rumours about the Switch Pro, couldn’t they have saved Scarlet/Violet for that? If there’s any Nintendo franchise that could benefit from a boost of graphical power it’s Pokémon.
Jonesy

Gone already
It’s taken nine and a half months, but the N64 controller is back in stock on the UK Nintendo Store – I’ve just ordered two!

You do need to be a member of the Nintendo Switch Online service to order though. I have no idea if they will still be in stock by the time this is published, but fingers crossed!
Matt

GC: They’re out of stock as we write this.

Playing the slots
Saw the fake Bandai Namco leaks today. They weren’t picked up by more sensible websites like GC but it was fairly believable, in that there was nothing too outrageous, just Tekken 8, Code Vein 2, Little Nightmares 3, and the rumoured new Armored Core. I give the fakers credit for both a convincing list and timing it to happen while there’s talk of a Bandai Namco hack – which is probably why the only thing they had time to make were fake logos.

The big news, as far as I’m concerned, is the Elden Ring DLC called ‘Barbarians Of The Badlands’, which absolutely does not sound like a name From would come up with. It’s also hard to imagine what it might refer to, because there aren’t much in the way of barbarians in the game, that I remember, and nothing about them being an issue.

I have been wondering though, as I’m sure many have, as to what actual DLC would be like. The way the game world is constructed, with bits of land floating in the air and so on, it seems to me pretty easy that From could just add new mini-continents whenever they want. The map already has a lot of empty spaces, especially around the middle section where it looks like a whole new are could be slotted in like a jigsaw puzzle.

Although a part of me would like to see something on the sea, maybe give you a boat to control and have The Wind Waker style island and maybe even underwater sections. A take on Atlantis sounds a lot more like what From would do. Barbarians Of The Badlands sounds like a Borderlands expansion.
Korbie

Inbox also-rans
I just hope all these Rockstar remaster cancellations means they’re going to show something about GTA 6 soon. A poster would be fine at this point, we’re literally starving for information!
Pokey

Is it me or is Yuji Naka gone off the deep end lately? That photoshopping out of his colleague is one of the pettiest things I’ve ever seen, and I spend a lot of time online.
Dalglish

This week’s Hot Topic
The subject for this weekend’s Inbox was suggested by reader Campbell, who asks what upcoming game are you most looking forward to?

We’ve just passed the halfway mark of the year, and what few not-E3 preview events there were are all done, so what upcoming game are you most excited about at the moment, whether it’s coming out this year or not?

As long as the game has been officially announced you can talk about anything you like, but do explain why it’s caught your imagination and what more you’d like to know about it before it’s released.

What are you most looking forward to in the second half of 2022 and how bothered are you by the smaller number of releases, compared to previous years?