Shenhe recently joined Genshin Impact as the latest in an extensive lineup of Cryo characters, offering impressive supporting capabilities alongside elegant Polearm attacks. Shenhe has excellent potential, but unlike other “one character fits all” supports such as Bennett, Shenhe relies on specific teams that are tailored around her unique playstyle.

Shenhe’s Icy Quill mechanic is the primary culprit for her niche. Whenever she uses her Skill – Spring Spirit Summoning – she will generate either five or seven Icy Quills for each party member, depending on whether the skill was pressed or held, respectively. These Quills will buff characters’ attacks according to Shenhe’s own ATK stat, but only if these attacks inflict Cryo damage. As such, her teams are rather distinct from many familiar compositions.

This team, comprised of Shenhe, Kazuha, Diona, and Ayaka, is a team optimized to squeeze every last drop of damage out of Shenhe’s abilities.

Shenhe can open up fights with her Skill and her Burst – Divine Maiden’s Deliverance – to apply Icy Quills to the whole party, reduce enemies’ Cryo and Physical Resistance, and also boost the active character’s Cryo damage.

Then you switch to Kazuha to Swirl Shenhe’s Cryo with his Skill and Burst, further reducing the Cryo Resistance of enemies and buffing your team’s damage with all of Kazuha’s passives. Even though Kazuha is technically Anemo, his Swirls of Cryo damage will continue to proc Shenhe’s Icy Quills for extra damage.

After Kazuha, your rotation continues to Diona. If you hold Diona’s Skill, each of the 5 Icy Paws created will proc an Icy Quill, instantly gaining the full benefit from Shenhe while granting your character a shield. You can also use Diona’s Burst here as necessary if your team is low on health.

Finally, Ayaka comes out just in time before Shenhe’s Quills expire. You can use Ayaka rather freely here, but if you want to make your rotations as fast as possible, simply use her Skill and then her Burst. You can then switch back to Shenhe and use her Skill again while Ayaka’s Burst is still active, which will refresh the Quills and continue the damage boost throughout the majority of Ayaka’s Burst.

This team can do exceptional damage to most opponents in the game, and it works particularly well against bosses that can’t be Frozen anyway. Be mindful of Cryo-resistant or Cryo-immune enemies though; even enemies as weak as Cryo Slimes can be very difficult for this team to deal with. 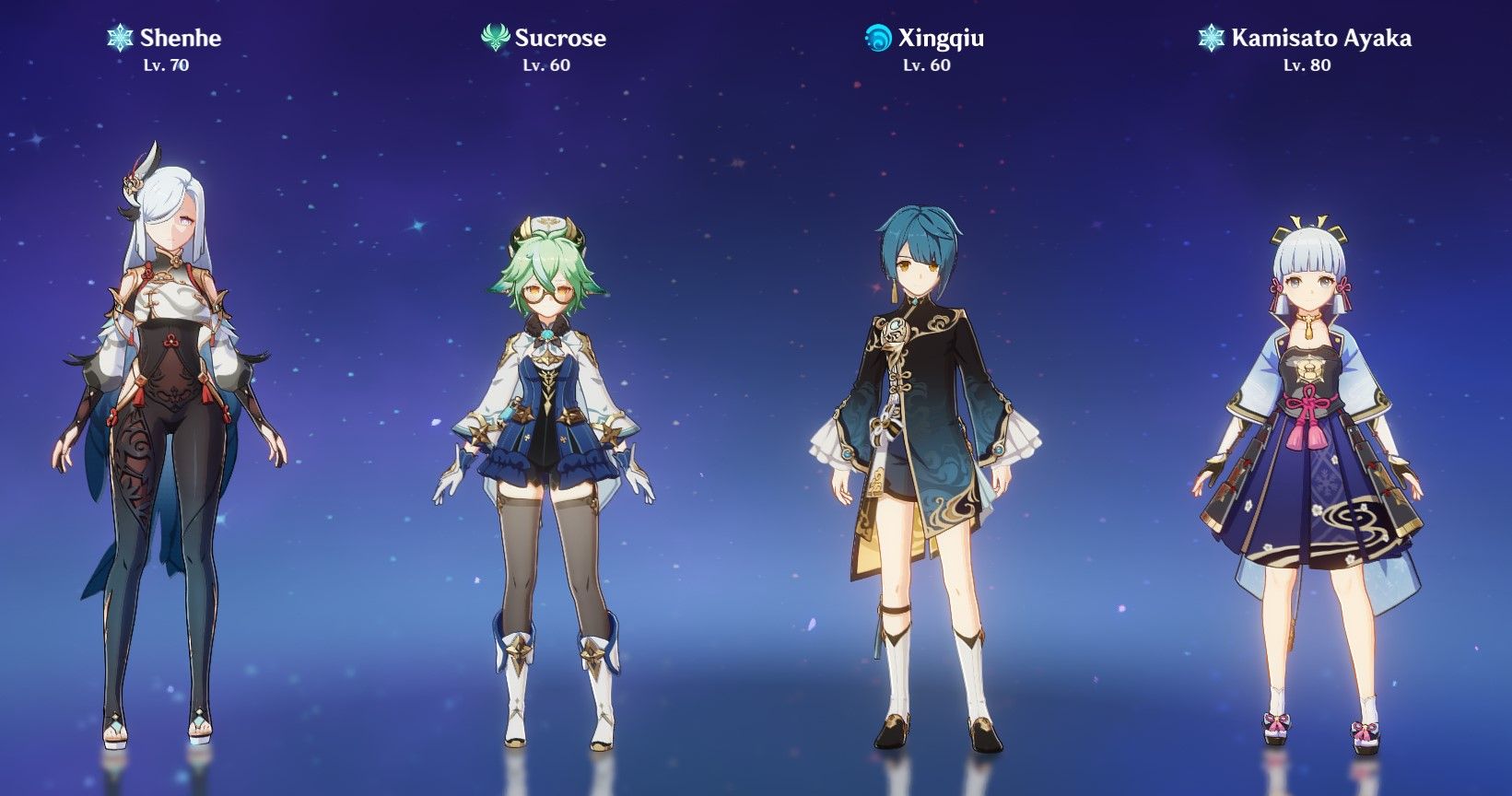 This team is what most Cryo characters are already accustomed to, but Shenhe provides a level of damage buffing to this team that was simply lacking before. A standard Freeze team now might look something like Shenhe, Kazuha, Kokomi, and Ayaka, although many of these characters can be swapped to your liking.

Kazuha can be replaced with Sucrose if you don’t have him or Venti if you need even more crowd control. Kokomi can be exchanged for Mona if you want extra damage from her Burst or Xingqiu if you want to focus on single-target damage. Ayaka can also be replaced with Ganyu, who serves a similar DPS function but has more range.

This team benefits slightly less from Shenhe since one member (the Hydro user) can never proc Shenhe’s Icy Quills, but the trade-off is the ability to Freeze enemies through constant reactions of Cryo and Hydro damage.

This capability makes the composition highly useful for newer players who might have a tougher time dodging enemy attacks. Veteran players can also benefit greatly from Freeze teams like this, especially when facing large groups of foes in the Spiral Abyss. 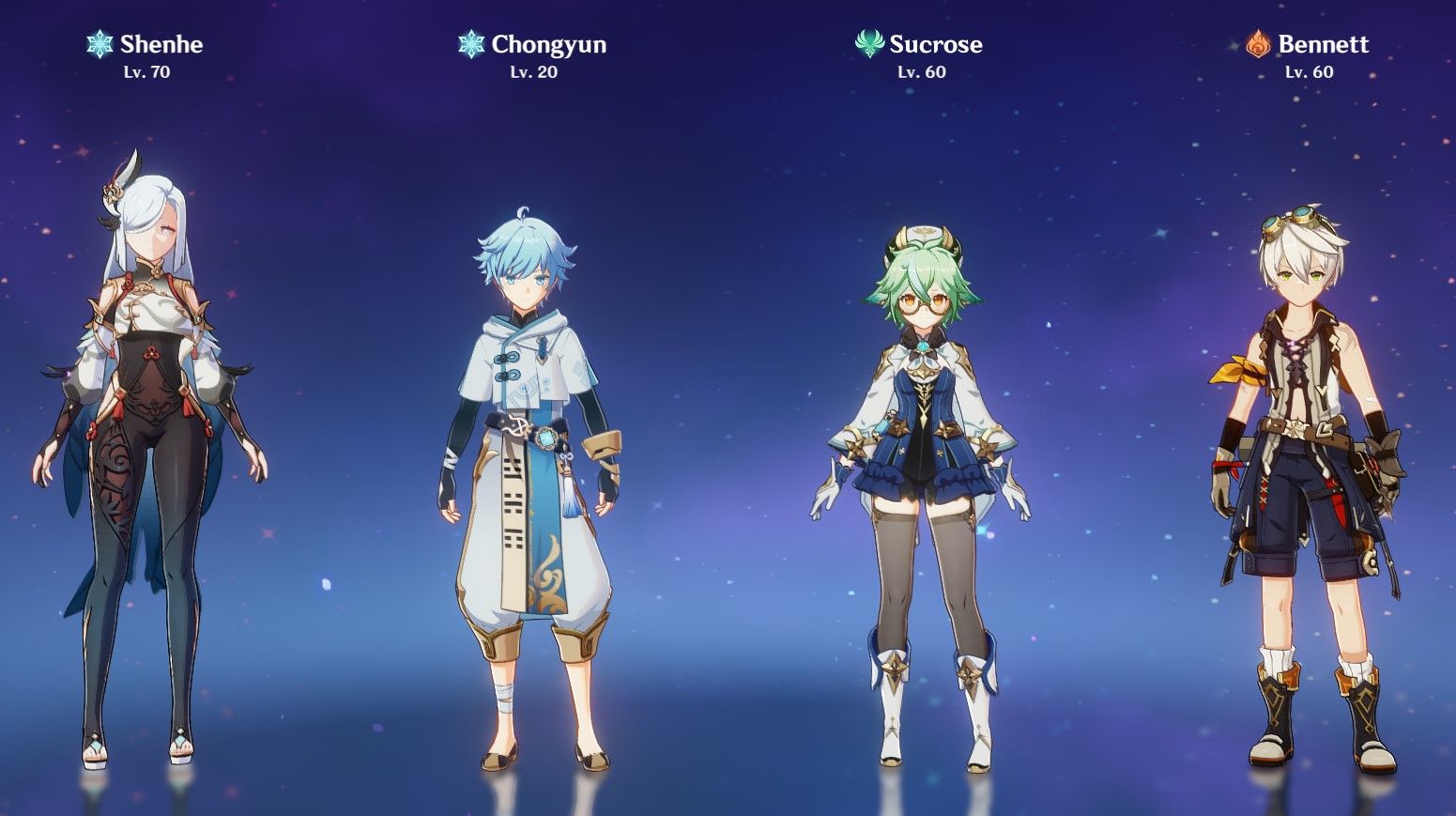 Shenhe was designed as a support, but that doesn’t mean a team can’t be designed around her as the carry. After all, don’t you want to see the beautiful animations of her Normal Attacks?

If you pair Shenhe with her nephew, Chongyun, her normal attacks will become infused with Cryo inside the zone created by his Elemental Skill. This will allow her Normal Attacks to proc her Icy Quills, gaining a substantial buff that will make Shenhe look more like a pseudo-Ayaka. Furthermore, Chongyun will also gain Icy Quills that can be used in conjunction with his Burst to deal massive instances of damage.

This composition can be rounded off with a Hydro user to Freeze enemies, an Anemo user to Swirl Cryo around, or even two Pyro units to raise your team’s ATK and potentially allow Shenhe’s icy attacks to Melt. The result is a team that is quite fun and can offer a pleasant change of pace from Shenhe’s typical role. Be aware, though, that this team works best if you have at least Shenhe’s first Constellation, which grants her a second charge of her Skill; otherwise, she runs out of Quills fairly quickly.