Neo4j, the company behind the eponymous open source graph database, has officially launched a completely free version of its fully-managed cloud service.

The San Mateo, California-based company first debuted Neo4j AuraDB Free as part of an early access program back in June, but today it launches into general availability for everyone.

Graph databases power core functionality in many modern applications, and serve to connect the dots between disparate pieces of data that are not so obviously related — it’s what enables Facebook to make such good friend recommendations or cybersecurity software to identify threats.

It has been a big year for graph database platforms, with TigerGraph scooping up $105 million, ArangoDB raising $27.8 million, and Neo4j itself securing $320 million at a $2 billion valuation.

Neo4J has so far offered a range of pricing options spanning both hosted and self-hosted. After launching its AuraDB enterprise product back in January, the company went about creating a special version of its premium hosted product aimed at smaller development projects. While one of the benefits of open source projects is that developers are free to use and deploy a product as they see fit, not all developers want the hassles or costs involved in self-hosting — which is where AuraDB Free comes into play. 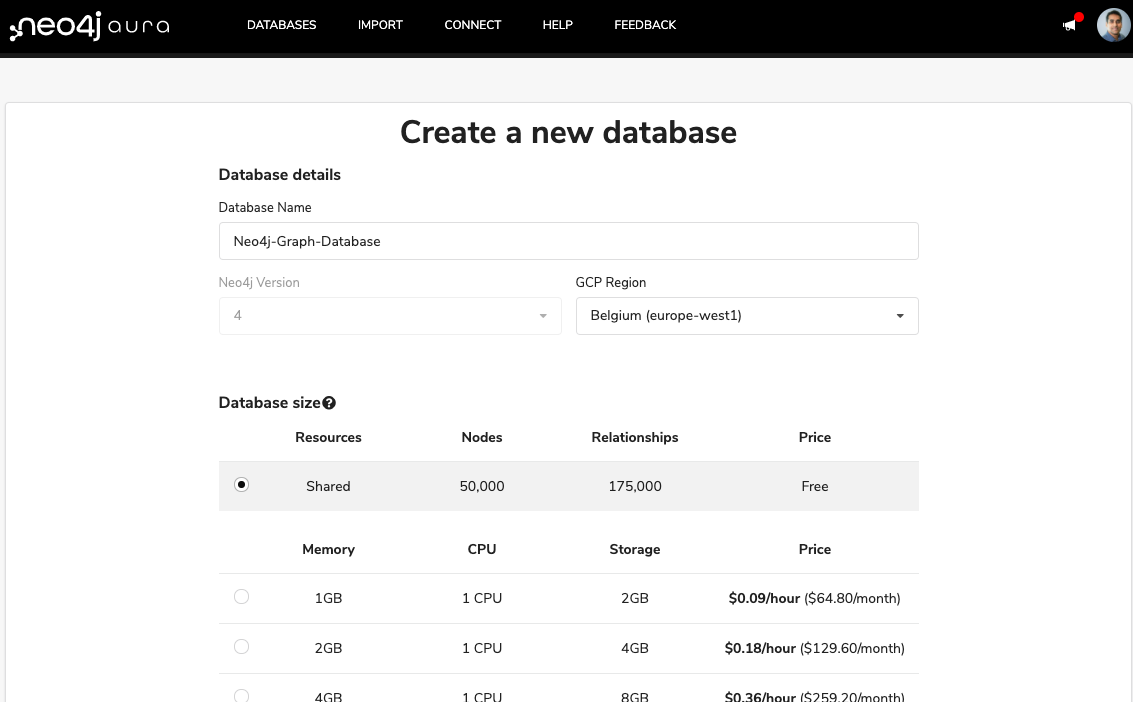 Above: Neo4j: Create a new database

It perhaps goes with saying that AuraDB Free has major limitations in terms of the number and size of databases it supports, and it is not designed for enterprise-grade projects — but it is completely free, with no trial period, time limits, and no credit card is required. And importantly, it sports most of the platform’s core functionality and developer tools, including data visualizations.

Ultimately, this is designed to lure independent developers onto the Neo4j platform early in the process, where they can later upgrade as their project grows. Alternatively, developers in enterprise settings might want to dabble with Neo4j to learn more about how it works, or put it to use on prototype applications.

However developers decide to use the free hosted version of Neo4j, it all amounts to the same thing — encouraging uptake in an increasingly competitive landscape.

“Some of the most innovative applications of Neo4j have come from our community, and we’re hoping AuraDB Free will further empower them and reduce friction to accelerate these ‘aha’ moments,” Neo4j CEO and coounder Emil Eifrem noted in a press release. “Today, we’re stepping up to offer graph developers the easiest way to learn, test, and grow with us in the cloud.”