Guilty Gear Strive's main antagonist, Happy Chaos, has joined the game's roster as its third DLC character. He is the second shooter character to appear in Strive, alongside Ramlethal Valentine. Chaos lives for conflict and even uses his complete knowledge of the universe to alter the history of the world. In turn, his fighting style accurately reflects his wild nature.

On the heels of its Game Awards win for Best Fighting Game of 2021, Guilty Gear Strive's online matches are where the real competition is! Check out this guide so you can learn the ins and outs of Happy Chaos and maybe even adopt him as a new main.

How To Play As Happy Chaos 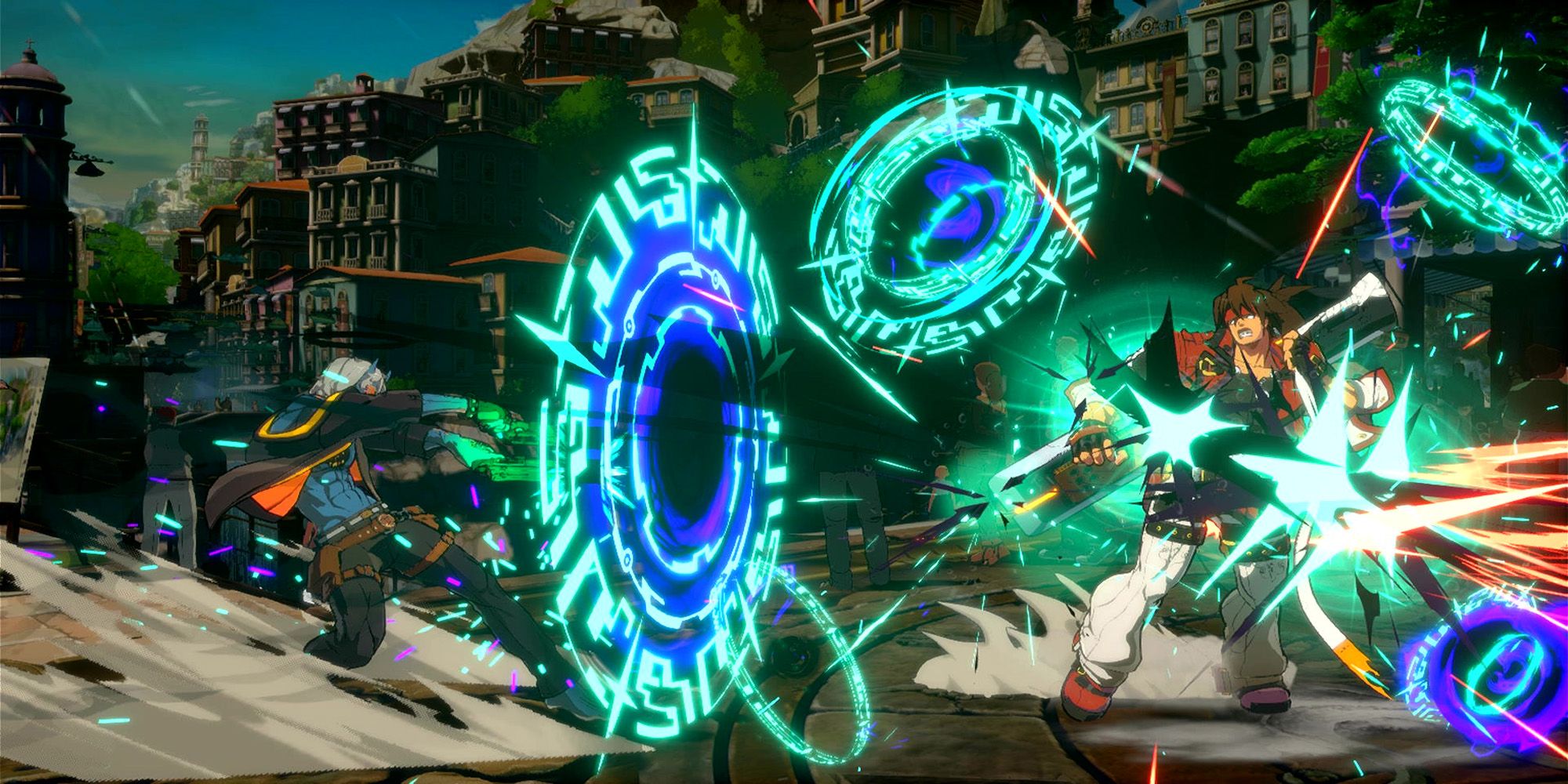 Happy Chaos is a shooter character, which means there are more elements that you will have to keep track of compared to playing as more balanced fighters, like Sol. So, let's start by explaining the basics.

Bullets And The Concentration Meter 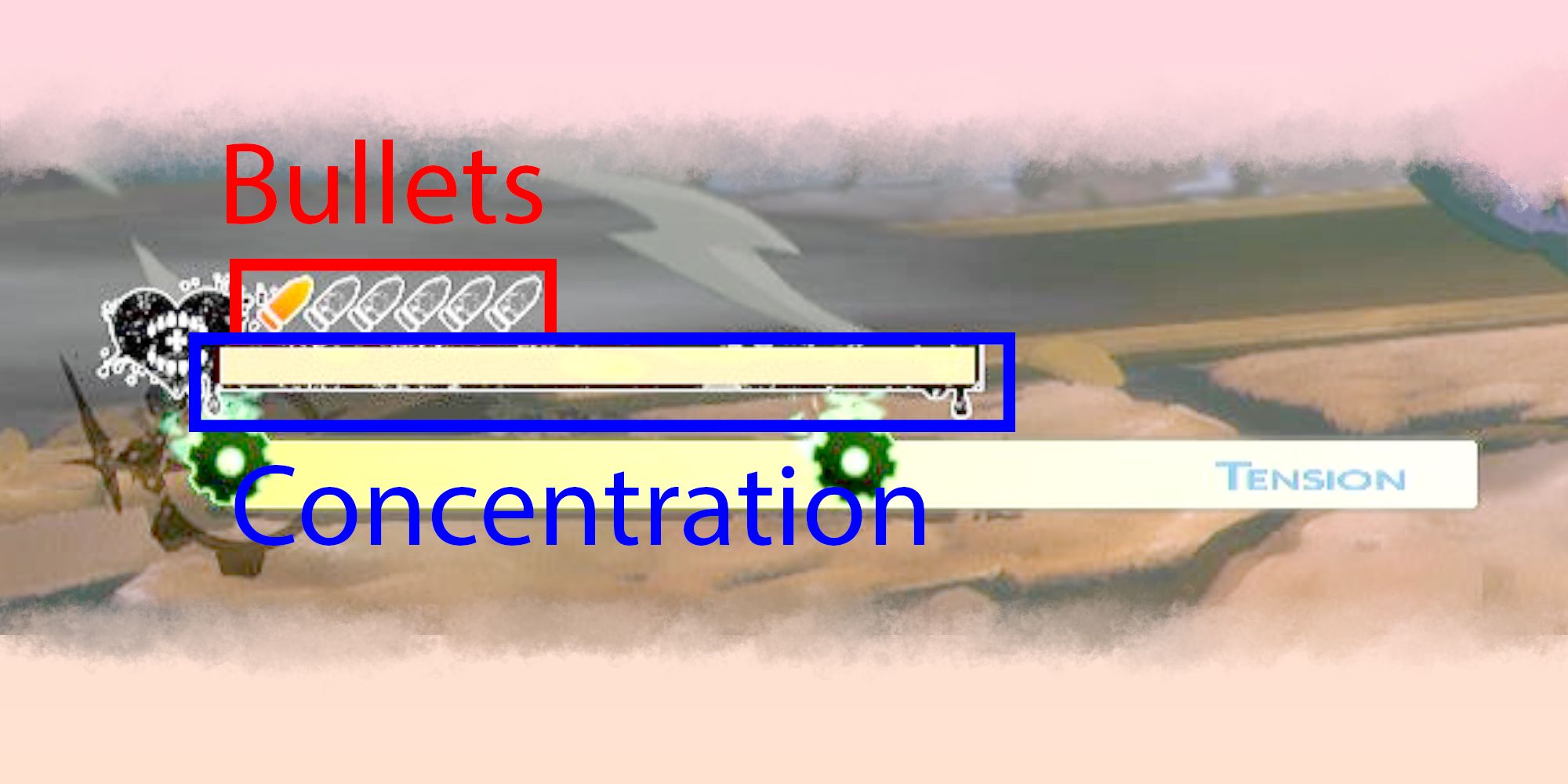 Understanding Happy Chaos's playstyle begins with learning about his character-specific gauges: bullets and concentration. Chaos can equip up to six bullets at a time. However, once engaged in At the Ready or Steady Aim stance, Chaos can only aim for as long as his concentration allows. Once the concentration gauge fully depletes, Chaos will exit his shooting stance. In turn, he cannot shoot again until the concentration gauge regenerates. Furthermore, Chaos's bullets do not reload automatically. Instead, you'll need to perform the Reload command for him to do so.

Making The Most Of Your Concentration

So, is there any way you can extend your concentration gauge? Luckily, there are multiple ways. First, the special move, Focus, recovers a fixed amount of the concentration gauge and slows down its depletion rate. However, keep in mind that Chaos is vulnerable when activating Focus, which means you'll need to use caution when deciding to activate it.

A hyped-up version of Focus exists as well. The overdrive move, Super Focus, fully restores the concentration gauge and significantly slows down its depletion rate. As a result, Super Focus is an excellent buff for inflicting the most damage with Special Aim. Usually, the concentration gauge lasts for one single Special Aim shot. However, with Super Focus activated, you can get up to five Special Aim shots. The damage inflicted from those shots alone is the equivalent of one overdrive attack.

Another buff you can take advantage of is the Curse ability, which increases Chaos's aim if it lands successfully. This ability is advantageous when dealing with fast opponents darting across the screen.

Chaos can also make clones of himself with his Scapegoat ability at the cost of some health. This ability can help create a buffer between you and your opponent while reloading your gun. However, you'll have to assess whether the potential damage caused by your reloaded bullets is worth the cost of health.

Like any fighters in Guilty Gear Strive, finding an effective Gatling Combination is the beginning of carving a path to victory. One satisfying aspect of playing as Chaos is that his shooting mechanic offers the opportunity for a long string of beats​​​.

For instance, let's assume we start with a simple base to our Gatling Combination:

Adding two Heavy Slashes will activate At The Ready and add a gunshot to your combo. If you keep shooting, you can perform a seven-beat combo. Furthermore, if you have a moment to activate Focus before your Gatling Combination, you can make use of all of your bullets. This eight-beat combo will likely push your opponent into a corner and trigger a devastating area shift.

Remember, however, that Focus makes Chaos vulnerable. So you'll have to decide for yourself whether activating Focus beforehand is worth the eighth beat (and possible area shift) in your combo.

A go-to tactic for Happy Chaos players is rolling forward to evade attacks and close distance, then firing shots at their opponent. With this in mind, you should anticipate this sequence ahead of time. Chaos is vulnerable at the startup of Fire. Use this opportunity to ground throw him before he gets a chance to attack.

For instance, Chaos may try to get you on the defensive by opening with a kick and then roll forward so he can shoot you from behind. However, you can quickly interrupt this sequence by pressing the dust button while holding onto your guard position, thus initiating a throw.

In turn, you can also use Faultless Defense to prevent Chaos from crossing you up with a roll. After all, while it's good to know when a Roll > Shoot sequence is occurring, it's even better to stop the sequence before it can occur.

But, what can you do when you get caught in the crosshairs of Chaos's gun? An excellent tip to remember is that Chaos's aim falters the more you move. So, for instance, if you notice Chaos start a string of gunfires, block the first few shots with Faultless Defense, then move in with a run.

Another tip to remember: Chaos cannot block while preparing his gun. If you catch him in this moment, you can punish him at mid-range by striking with a long-reaching or fast-lunging attack.