As of the time of writing, Last Spartan Standing will always take place in the big team battle map, Breaker. The limited time-event, Interference, requires that you complete challenges in Last Spartan Standing to progress and unlock cosmetic customization. As a result, you're going to want to be at your best to dominate this new game mode and unlock every armor piece, emblem, and coating before they disappear. 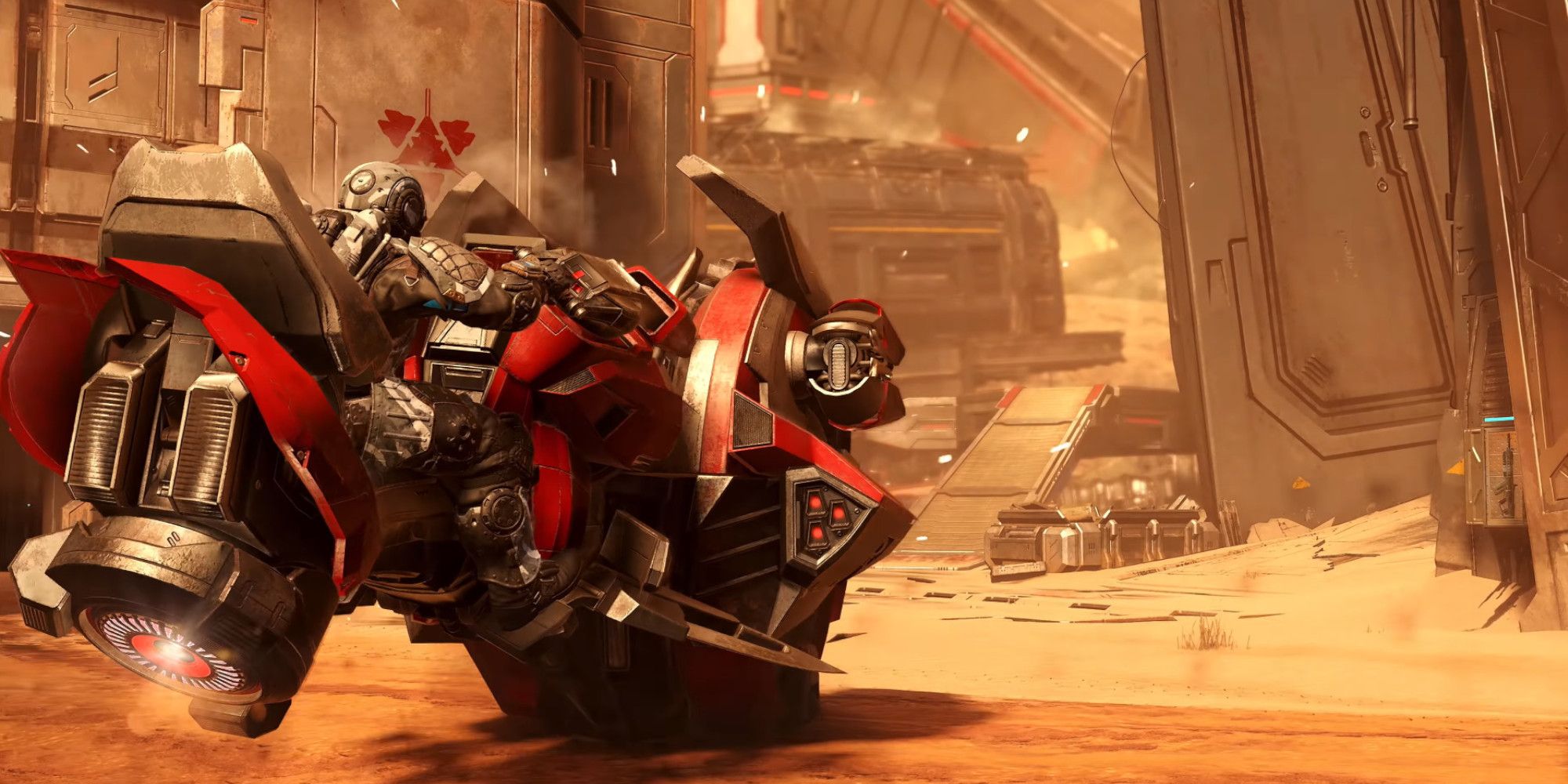 Last Spartan Standing sees 12 players begin the free-for-all match equipped with a Pistol, Disruptor, and five lives. Every kill grants you 100XP and every assist is worth 50XP; once you have enough, you can level up and receive better weapons for the rest of the match. Once an enemy is fully out of their lives, they leave behind 300XP that you can claim for yourself, though you leave yourself at risk by doing so. This mode also features a battle-royale style shrinking danger zone. Naturally, when all your enemies are out of lives, you'll be crowned the winner.

Invisibility and Overshield randomly drop across the map in flashing green drop-pods.

As of Season Two's launch, Last Spartan Standing only takes place on Breaker, a brand new map. This is a red-hued, desert-style map, currently being used by the Banished as a mining facility of sorts. The Last Spartan Standing variant of this map doesn't feature any vehicles or power weapons, only grenades and abilities that spawn in specific locations.

Abilities include the Drop Wall, Repulsor, and Grappler. The Drop Wall is useful when used preemptively but it takes way too long to activate, so if you're already engaged in a firefight, don't waste time deploying it.

The radar has also been deactivated for this mode, so you'll need to rely on your senses to get the job done.

There's plenty of high ground you can camp on in the middle of the map, as well as rubble and mini-bases to hide in around the corners. Make use of the rubble to run under or around structures, rather than simply running across the desert, since you'll be clearly exposed. A Banished mining laser will also be moving throughout the map so be careful to not jump into it and risk an annoyingly avoidable death – though if you're lucky enough, you might be able to use the Repulsor to push an enemy into its destructive sights. 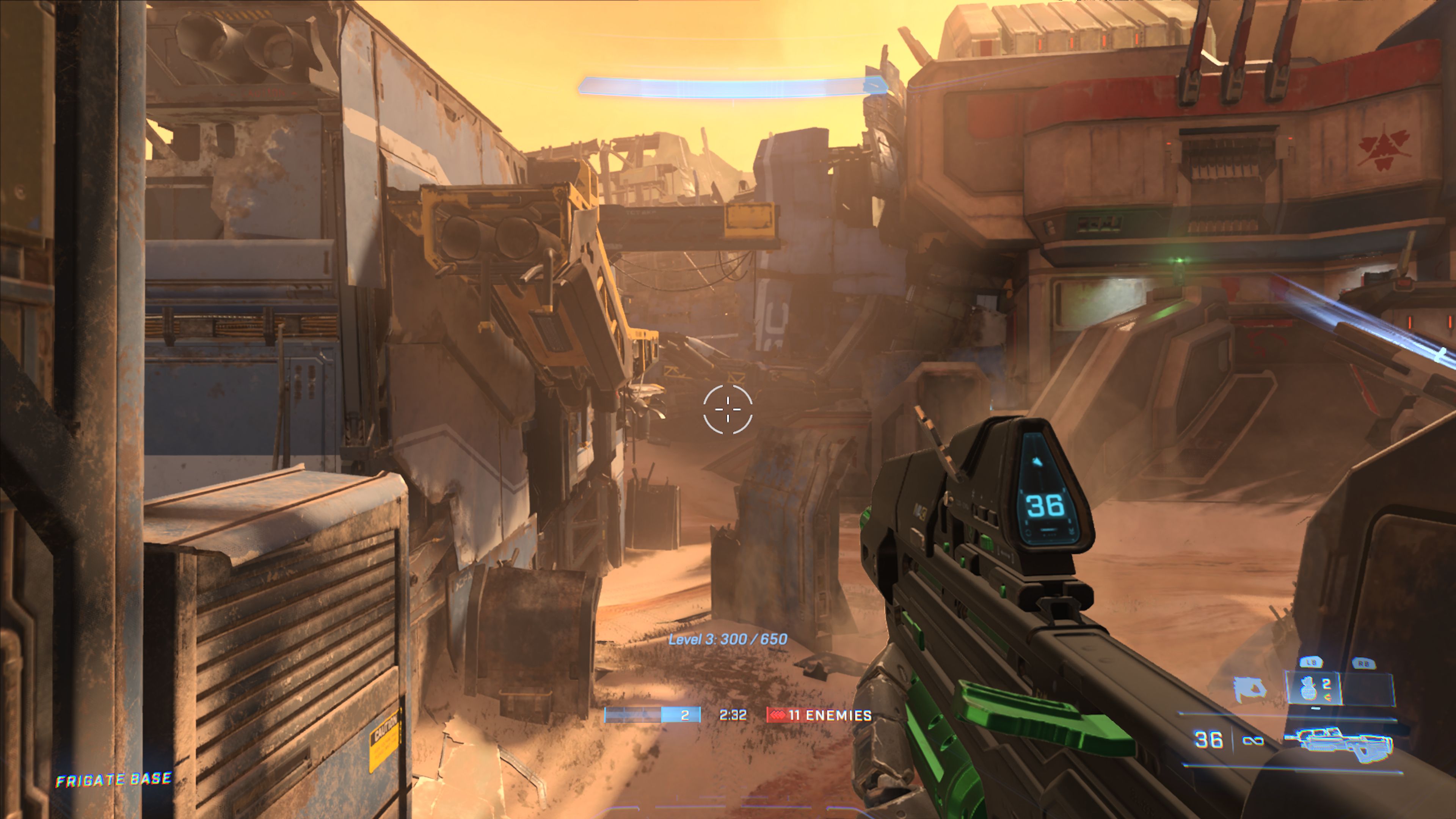 One of the key strategies to success is to level up when it's appropriate. Once you gain enough XP, you can level up and gain a new weapon when you choose, but you won't be able to pick which weapon you sacrifice. The weapons you gain and give up won't vary from match to match so think carefully about your loadout.

For example, the Mangler isn't as versatile a weapon as the Pistol, so you might want to wait to level up until you can also level up to get the Assault Rifle. The same can be said for Level 4 when your loadout will consist of a Bulldog and a Commando Rifle. These are two weapons with more specific uses and they're harder to master than a Battle Rifle. The Mangler and Commando Rifle are also slightly harder to use than a Pistol or Assault Rifle, so think about your strengths or weaknesses.

Make sure you know what you're getting when you level up here: 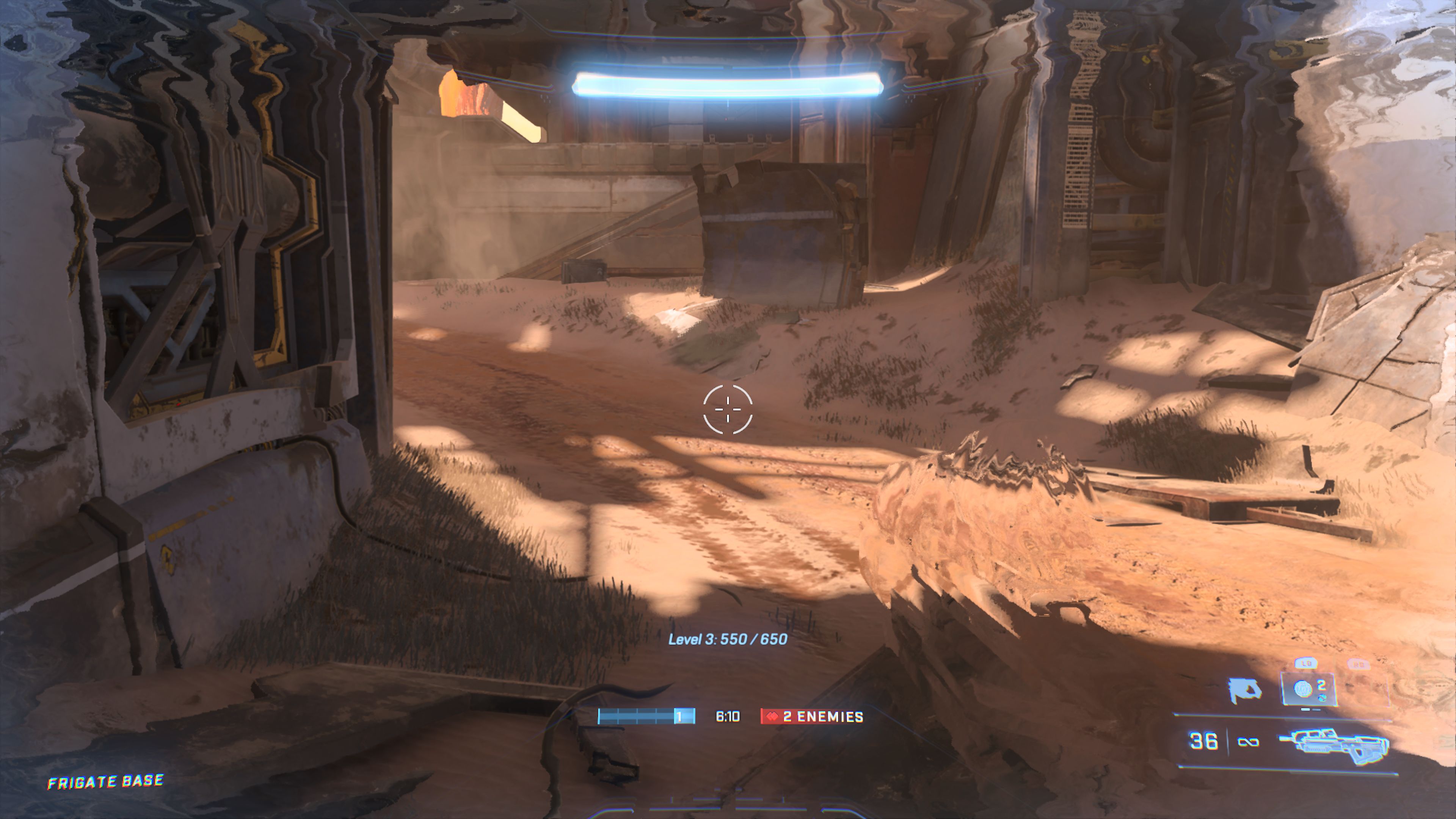 Once you manage to get your hands on invisibility, activate it immediately since you won't have much of a chance to do so after you enter a firefight. Sprinting or shooting makes you temporarily come out of invisibility, but you can still jump to move around the map a little faster. You'll also be able to steal eliminated spartan's leftover XP, which would usually leave you vulnerable in other circumstances.

When you're invisible you either want to melee an enemy from behind – which is a one-hit kill – or throw a sticky grenade at an enemy. If neither option is viable, the first person to shoot is usually the victor of a shootout, as long as you're on equal footing when it comes to weapons and aim. 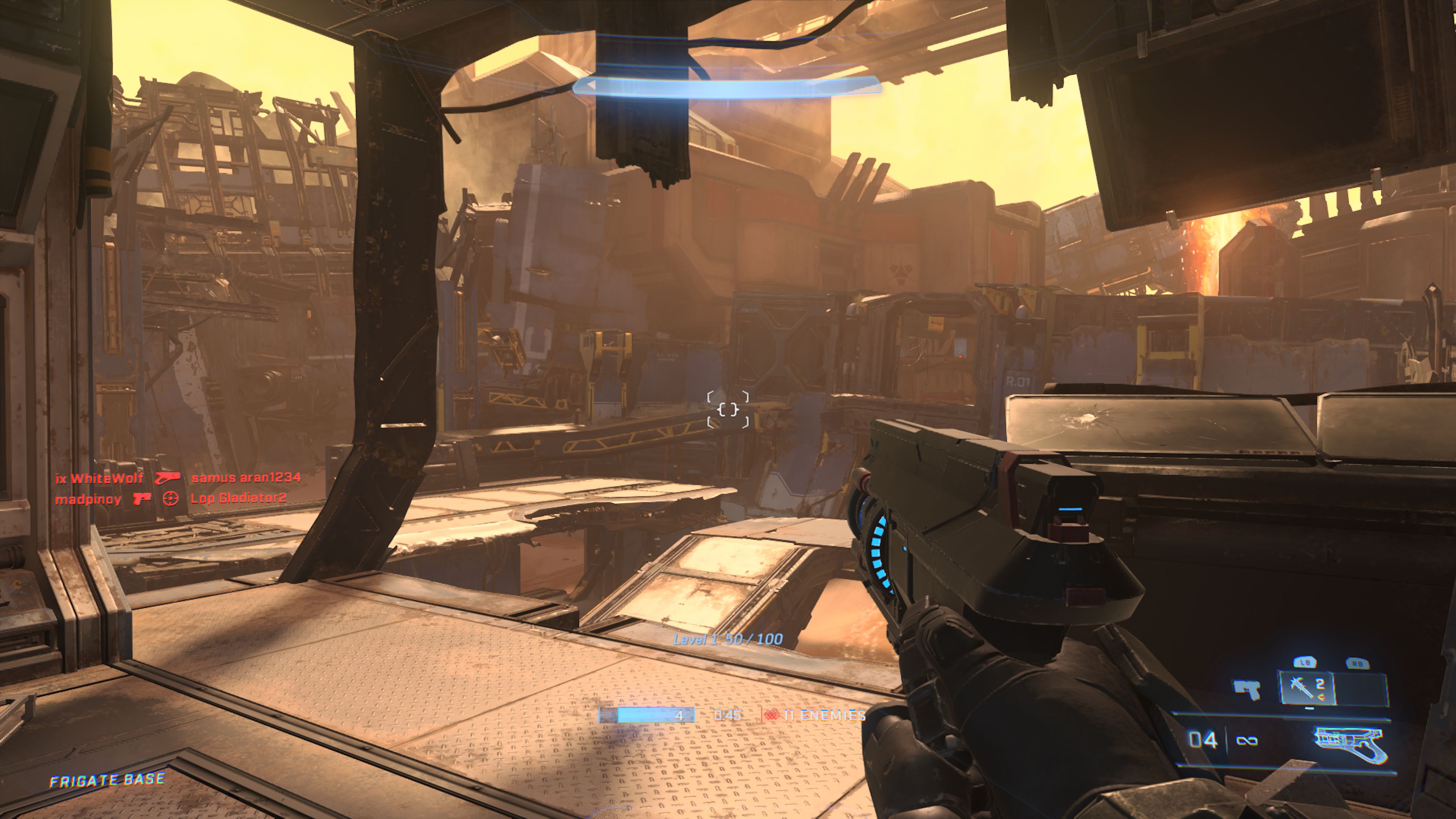 Hiding and letting your opponents wipe each other out is another viable strategy, especially since you'll be keeping most of your five lives while everyone else's is whittled down. There are plenty of places that you can camp in and fortify such as a pocket in the Frigate Base that overlooks the rest of the wreckage. Making use of as many invisibility drops as possible will also help.

You might run into trouble doing this near the end of the match as the map gets smaller and your opponents have longer-ranged weapons. If you're handy enough with a pistol, this won't be too much of a problem and the extra lives you have will put any head-to-heads in your favor. 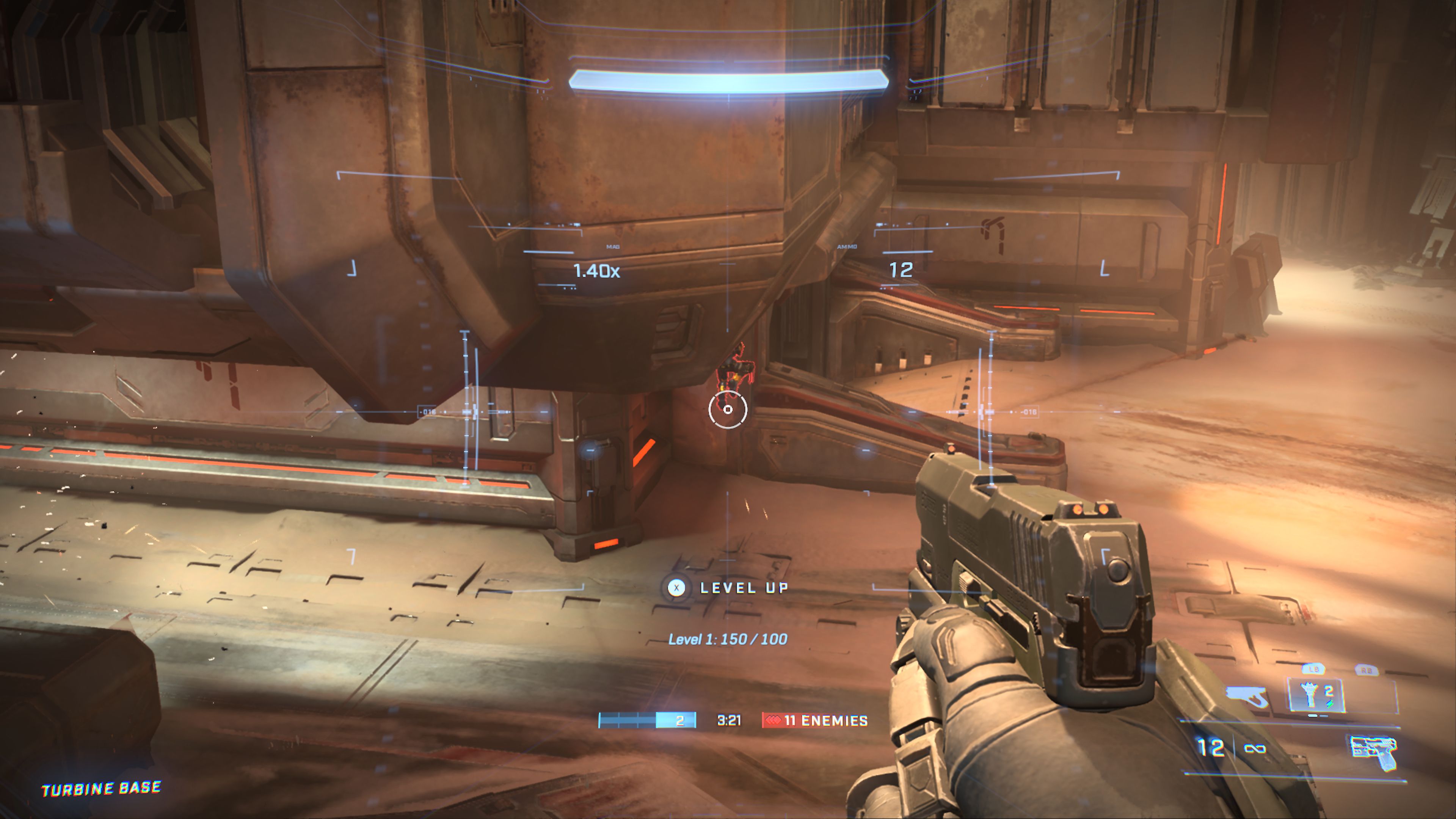 As a free-for-all mode, dirty fighting is encouraged. Catching two or more spartans in a gunfight is the perfect chance to steal some kills. It only takes one headshot to dispose of a spartan with their shields down. Stalking enemies already engaged in a fight is the perfect way to gain the XP from both kills. Or, worst-case scenario, you'll still gain 50XP from assists. As long as you get one shot in, you'll make progress.

The minute you gain access to the Commando Rifle or Battle Rifle, get to the high ground atop the wreckage in the middle. You won't get very many kills by scoping out enemies – since there's a lot of cover in this map – but it's an excellent tactic to finish spartans with their shields down or just whittle down an enemy's health for an assist.

There's a chance that you'll find the Repulsor ability spawn around Breaker. This is an excellent tool to gain the higher ground. Simply jump while looking at the ground, then use the Repulsor to push yourself up, sort of like a double jump. This can help you reach higher ground without needing to go all the way around structures.

The Repulsor can also double as an offensive weapon. There's a hole in the map at the Turbine Base, so if you angle yourself properly you can repulse an enemy straight into that gaping hole. A mining laser will also be going back and forth on the map and the Repulsor can be used to launch enemies straight into it, though this can be much trickier to execute.