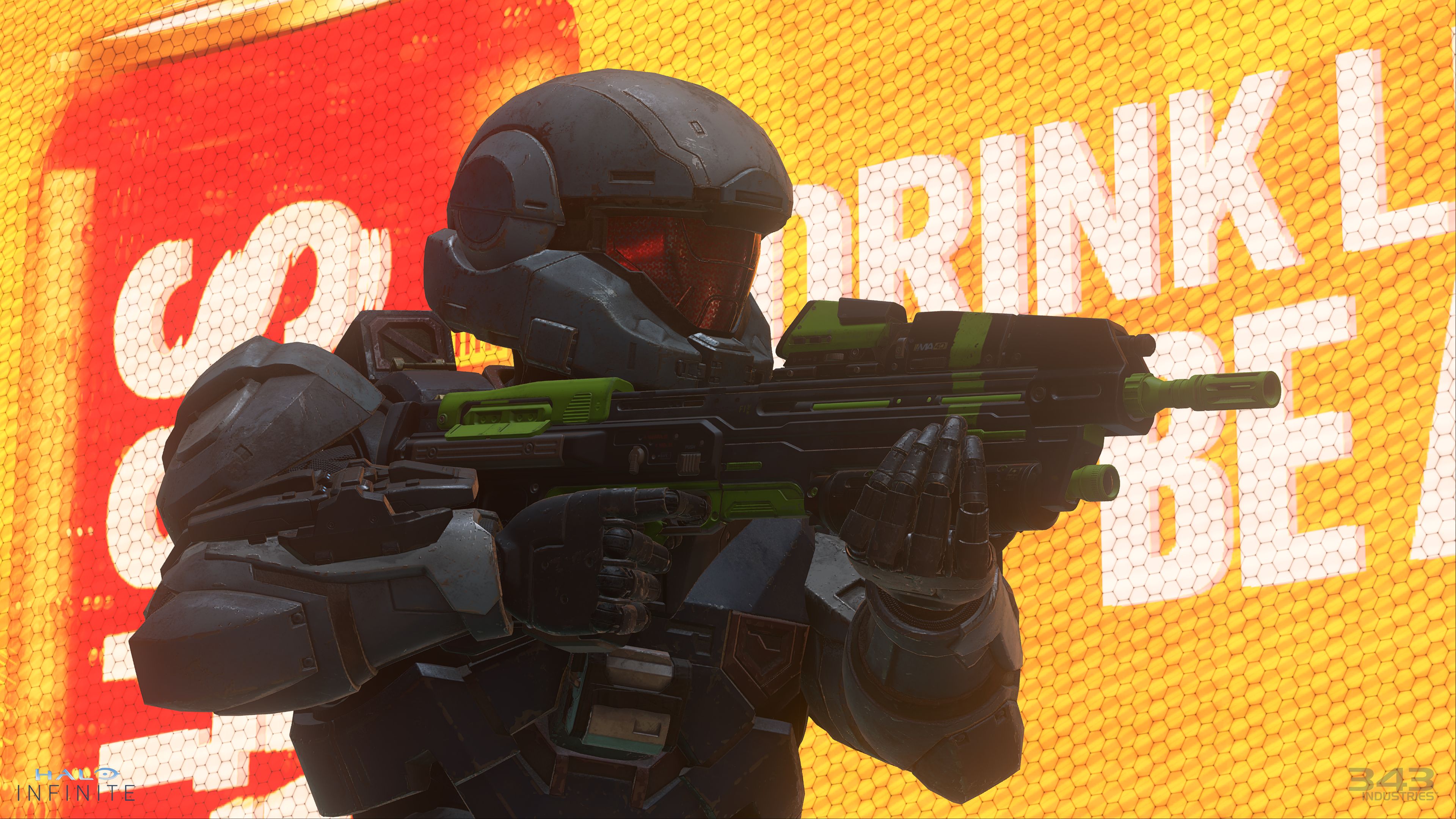 The final game doesn’t launch for a few weeks yet but Halo Infinite’s free-to-play multiplayer is out now and already a major success.

Halo: Combat Evolved is one of the most influential video games of all time. By 2001, GoldenEye 007 had already proven that first person shooters could work on a console but it was Halo which showed they could work online as well. The influence of the original, and the games that followed, can still be seen clearly today, even if Halo itself has fallen out of the online shooter zeitgeist with its last few sequels.

It has now been over six years since the last new game in the franchise and while we’ve only played a portion of the single-player so far, the multiplayer has already been released as a separate free-to-play download. That’s a bold move but exactly what Halo needs to regain its crown.

Having now spent some time with the competitive side of Halo Infinite, its clear that developer 343 understand the job before them. They’ve crafted something that feels special and distinct. It’s not without structural problems, that do currently get in the way, but it’s also a multiplayer game that is a joy to play.

Due to the evolving nature of Halo’s combat since its inception, many players will be curious about what era of Halo this most closely resembles. While this will likely disappoint Halo 3 fans, the closest counterpart is Halo 5. However, that game’s multiplayer was deeply underrated and what made it pop was its sense of snappy immediacy.

Halo Infinite’s combat still has this same rough and tumble, crunchy aspect to it. The guns feel powerful and responsive, all propped up by an audio design that is doing a ton of lifting. It makes for a combat experience that just feels great, and a smart evolution of what came in the last game. The gunplay may not be quite up to the standard of Bungie era Halo but it’s very close, and plays a purposefully different style of game.

Halo Infinite isn’t just a retread of Halo 5. It does have its own distinct identity, that feels like it’s trying to capture elements of Bungie’s original trilogy. For example, abilities and power-ups are much less frequent. Since Halo: Reach, 343 have felt like they’ve been trying to figure out what to do with abilities. They’ve been shuffled around in how they are used in every release since. It’s all moved away from earlier games where every Spartan was equal and could only use, say, active camo if picked up somewhere on the map.

Halo Infinite seems to be paring back from recent games in this regard. Now abilities are found on the map and respawn on a timer. However, they are a little more dynamic than older titles. Now they can be activated whenever the player wants, giving you more flexibility. There is also a fairly wide breadth of these gadgets, from a shielded drop wall, to grapple hook, dodging thrusters, classics like active camo and overshields – as well as a repulsor that pushes enemies and vehicles away from you.

That last one can cause some real hilarity if used ingeniously, often sending players helplessly flying off the map. However, because these items don’t spawn with you, and have to be picked up off the map, they feel rarer and more impactful. These are resources to be fought over in the same way as power weapons.

Speaking of, there is a really diverse set of weapons here, with returning classics but also plenty of new ideas. For the returning weapons, the auto rifle feels as viable as it ever has and the pistol feels like a snappy headshot machine. The rocket launcher is still king of the power weapons, a battle rifle remains the connoisseur’s choice of primary, and a sniper… well, it’s a Halo sniper. It’s a dream to handle.

However, Halo Infinite’s arsenal also shines with its newer additions. The Cindershot is a grenade launcher that is frightening to be hit by, the Heatwave is a bizarro shotgun that can fire pellets both horizontally or vertically, while the Disruptor is a quiet monster – eviscerating shields with electric tick damage. There is also the hilarious new harpoon power weapon, the Skewer. It impales enemies, but also vehicles with an enormous spike. That’s it. And it’s one of the most satisfying kills you can get in the game. 343 have really found a nice toybox here with the weapons, offering a lot of different styles on the fly throughout a match.

Using these guns feels fair for the most part, because it feeds into one of Halo Infinite’s most distinct aspects: a long time-to-kill. This harkens back to older Halos, and it’s an interesting choice in the modern era. In a world where most games are trying to reach seemingly lightning-fast kill times, Halo Infinite has swung hard in the other direction. It’s debatable it’s even too long, with firefights lasting more than several seconds sometimes.

That being said though, it makes the game feel really distinct in its identity. It’s unique in the genre. You have long enough to bring a fight back with smart gunplay. It adds a sense of fairness that allows better players to turn an encounter around. You might take some damage first, but that isn’t the death sentence it is in other games. It feels a little long for some, but once you get into Halo’s groove, it makes the game feel unmistakably Halo. A real sign that 343 aren’t chasing trends but instead crafting something purely of the franchise.

The map pool consists of 10 maps, with many made specifically with one game mode in mind. Maps like Bazaar, Live Fire, and Recharge are very specifically for the arena playlist, which hosts 4v4 matches. On the other hand, Highpower and Deadlock are very obviously designed for Big Team Battle (up to 24v24). Each of the maps feels distinct, and even though there are only a handful of arena maps and a handful of big team battle maps, they have yet to feel repetitive.

Instead, they feel like spaces to master. Just as it’s easy to remember The Pit or Blood Gulch from Halos of old, these are obviously spaces that will gain value with repeated play, as players come to grips with where everything is. It makes it feel like a growing joy to play the maps over and over, rather than a chore.

As for the modes you can play, there is a decent amount, however, this is where some of Halo Infinite’s biggest issues rear their head. When you load into the multiplayer you’ll be met with four options: Quick Play, Bot Bootcamp (where you and three other players play against easier bots), Big Team Battle, and the Ranked Arena. However, these are merely playlists, and three of the four are the same playlist in a different context. Quick Play, Ranked Arena, and Bot Bootcamp pull from more or less the same modes and maps.

The problem here is that there are seven actual game modes: Slayer, Capture the Flag, One Flag Capture the Flag, Total Control, Stockpile, Oddball, and Strongholds. However, there is no way to differentiate the modes outside of their playlists. This means you can’t tailor what you want to play. You are just thrown into a match, and what you get is what you get. This is particularly felt in Ranked. While you might want to just run in and prove your worth in Slayer, in the game’s most competitive playlist, you might get Oddball instead. It adds a strange sense of randomness to the experience, that feels like it maybe should allow a little more player choice.

However, undeniably, Halo Infinite’s biggest issue is its progression. For some reason, progress towards unlocks and cosmetics isn’t behind playing games, but relies entirely on completing challenges in a week. That means you can play for dozens of hours and still only hit level three or four. For a Battle Pass that has 100 levels on it, that’s just untenable.

However, 343 has already committed to adding daily challenges that are centred around simply playing matches, as well as reworking some of the harder, more awkward to complete weekly challenges. Hopefully this goes some way to addressing the issue, which is currently the biggest issue in the game.

For now, there’s also a big emphasis on XP boosts, as well as cool cosmetics being locked behind the in-game shop. Since multiplayer is free-to-play, this is all understandable, but it still just feels bad when the core progression is so utterly slow.

The problem is two-fold though. Because it’s so hard to get more levels, the carrots you want seem so far away that it almost feels futile to try to earn them. That means, right now, it can feel like there is no real reason to chase goals. So many games will have you on several treadmills at once, all designed to keep you playing. A reason to come back – things to earn outside of pure victories in-game. At the moment though, Halo Infinite doesn’t feel like it has that.

However, perhaps the biggest point in Halo Infinite’s favour is that thus far these problems haven’t really mattered. There is just a desire to play more Halo Infinite because it’s fun. The moment to moment is so snappy, and offers a play experience so unique, that it doesn’t currently need structure outside the matches to compel you to play. That’s exceptionally rare in today’s landscape. Playing a multiplayer match purely because it is a joy, and less because you feel you are chasing something, feels like a dying concept.

Halo Infinite’s multiplayer has instantly become a major player in the first person shooter space and feels like it will be for a long time to come. Its free-to-play nature means anyone can try it, and its quality will ensure many will stay. This is the best new first person multiplayer experience released this year and feels very different in cadence than your Call Of Duties or Battlefields. While those feel like technical yet corporate entities, Halo Infinite captures something harder to define. Something purer. A magic that was lost in being a younger person with more time on their hands, and nothing but friends to wreck on Valhalla.

It has big issues when it comes to player choice and its progression systems, but those melt away when you are in a firefight shooting a Needler at another Spartan. 343 has succeeded in a way many might not have thought possible. Halo feels important, perhaps even essential to the genre again. And gosh, that feels great to say.

Related posts:
11/19/2021 News Comments Off on Halo Infinite Multiplayer Beta verdict – shooter of the year
Hot News
One Step From Eden: How To Unlock Every Costume
Final Fantasy 14: Endwalker – Where To Find All Aether Currents In Garlemald
Oddworld Soulstorm: How To Save All Mudokons In The Funicular
Fortnite waiting in queue: Fortnite Chapter 3 servers down with issues
The Epos H6 Pro Open and Closed gaming headsets are great for console players
Recent Posts