Amphibia came to an end a couple of months ago, but this gay idiot is still experiencing continuous brain rot thanks to the Calamity Trio and their epic, self-indulgent swansong. Anne Boonchuy, Marcy Wu, and Sasha Waybright all adopted magical girl powers and flew into the stratosphere before partaking in an epic space battle to rival even the best mecha anime. Gunbuster. Evangelion. Vision of Escaflowne. Magic Knight Rayearth. Madoka Magica, You name it, Amphibia riffs on it. I love it when western cartoons go full anime.

The writers, animators, and production crew came into this finale with a specific story to tell, one that would give each major character room to conclude their individual arcs while leaving the universe in place where it could conceivably go anywhere in the future. Fans can take their ships and headcanons wherever they like, while the final thematic and narrative destination featuring older characters and changed worlds lends it a sense of finality with just the right amount of wiggle room. Things are left open, but this specific book has now closed.

I could sit here all day talking about how wonderful the finale manages to be, but I want to focus on a handful of minutes that depict Amphibia at its most imaginative and extravagant. I’m talking about the fight sequence shortly after our three heroines use the music box to gain magical powers and fulfil a prophecy that for thousands of years has remained unknown. They are destined to save this world, even if it means Anne Boonchuy has to sacrifice her own life in the process. She lives though. Well – kinda, it’s complicated.

But enough about the existential nature of our protagonist’s very state of being in the modern day, let’s talk about cool anime space battles. This sequence is masterful, and feels like a culmination of everything Amphibia has set out to achieve since its inception. A love letter to fans who have come to see Anne, Marcy, and Sasha as characters they can relate to and see themselves in. Whether this be through positive qualities or notable flaws, seeing the three girls finally come together after months of hardship to save the day warms my heart.

All manner of sticks and fauna emanate from Anne’s flaming hair, showing her embrace of a world she once felt would never welcome her, pulling out an ethereal tennis racket before serving forth a ball that explodes into a cluster of cats that represent a familial love she has never once abandoned. Sasha’s attacks represent the confidence she has always had, but with a more mature edge as she dances through enemies and exudes an aura of leadership that was once dominated by selfishness. As she explores into a flaming heron representative of her blades the camera draws out to focus on Marcy, who is busy losing her mind at the anime spectacle unfolding out before. In this moment she is the fans, tearing up and in disbelief that this final battle is even happening at all. But she’s earned it, and we’re right here with her. 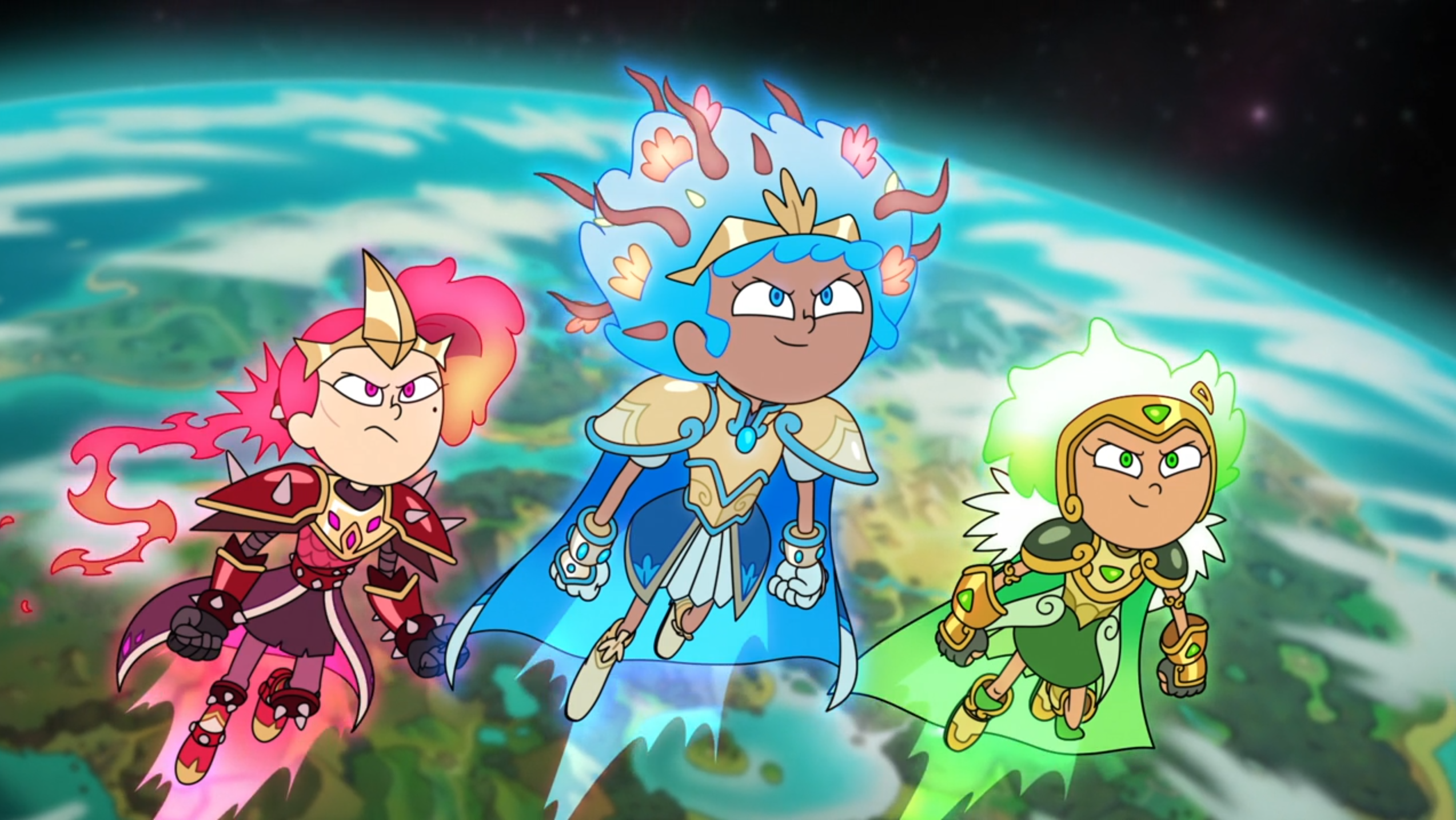 She whips out a D-20, performs a perfect roll, and thanks her friends for fighting by her side. Classic anime protagonist vibes, and Marcy is indulging in a moment that will likely never come around again. Her character arc throughout Amphibia is one defined by secrets kept from her friends, hoping to embark on an eternal adventure in spite of responsibility. In some ways she doesn’t deserve forgiveness, but gains that privilege and grows so much as a person. But she’s still a nerdy teenager who is obviously going to lose her mind when a very real space battle comes around. Her eventual job as a webcomic artist is also perfect.

The trio embrace once all their attacks are executed, smiling in the face of endless debris as they soar through the vacuum of space ahead of their next move. Anne’s sacrifice to follow brings the mood down to a far more sombre level, but until then we’re free to bask in exuberance as the music swells to an eventual crescendo. 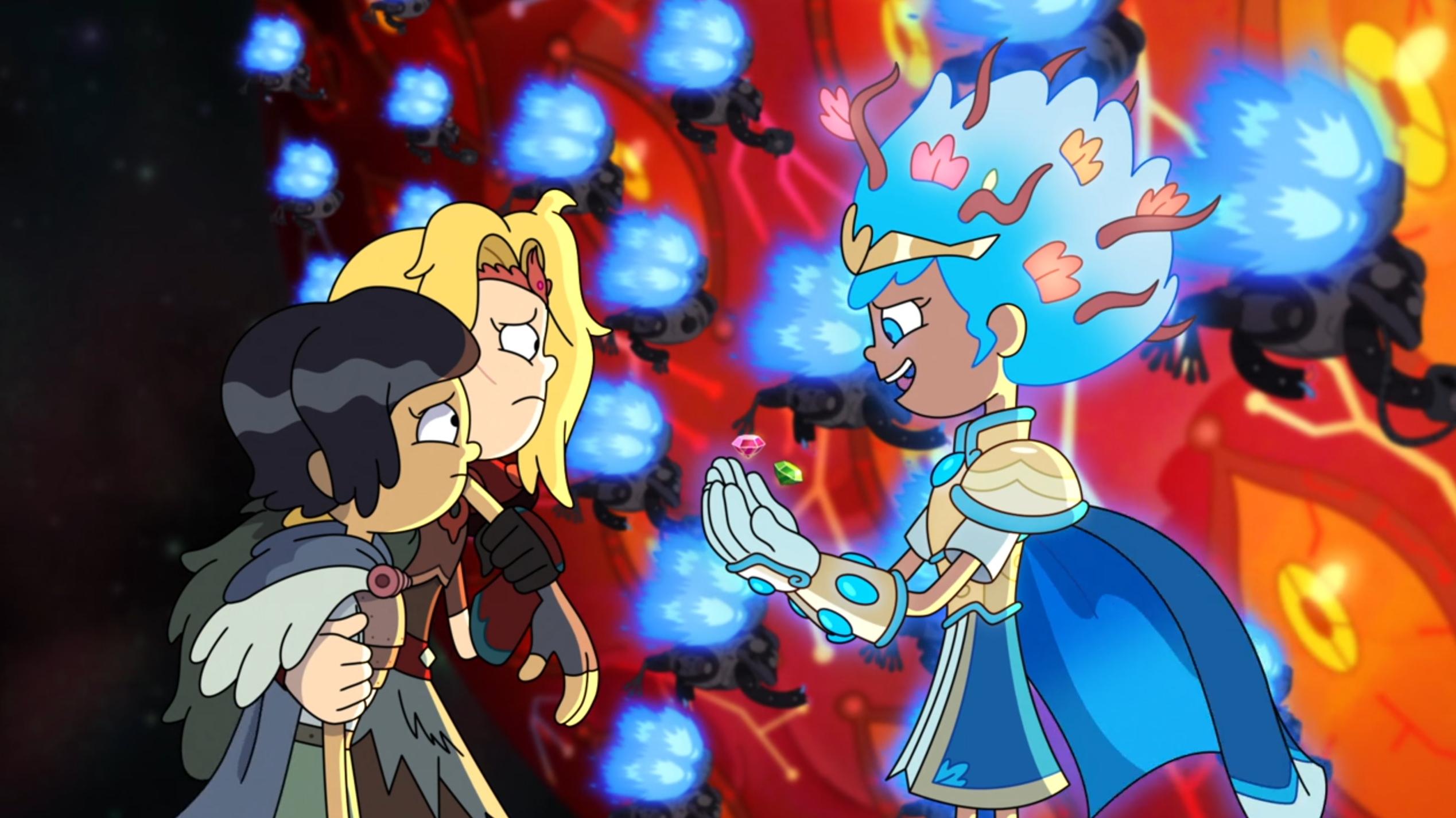 I sound hyperbolic, but I’m just a girl who really loves her cartoons. It’s made even more perfect by the arrangement of ‘No Big Deal’ that erupts as the battle begins. It’s so jazzy and infectious, representing how much these heroes have grown since we last heard them perform it and finally begin to restore broken bonds. Part of me still wishes that Amphibia took some of its more emotional developments more seriously – like Anne’s reaction to Marcy’s death in True Colors – but moments like this more than alleviate such shortcomings. It’s bubbly to such an absurd extent that you can’t help but fall in love with it all.

We’ve reached a point in games and animation where creators who grew up on classic games and anime are now starting to create their own projects, and those influences are bleeding through in so many wonderful ways. Showrunner Matt Braly wears this inspiration on his sleeve when it comes to Amphibia, filling so many frames with playful references and familiar energy that viewers like me can pick up and appreciate each and every time.

The finale’s space battle felt like a perfect distillation of that ethos, and never once sought to compromise itself when it comes to representing the love of its creators on screen whether the unfolding narrative was original, inspired, or a mixture of both in the most immaculate way possible. Amphibia loves anime, and anime loves Amphibia. It ain’t no big deal.