Dungeons & Dragons returns to video games with Baldur’s Gate 3, bringing all the imagination it’s known for. The game is still in Early Access, so there’s some bugs to work out, but the creative powers of D&D are alive and well in the character customization. Many of the D&D races are represented, from classic elves to the rare Githyanki. Praise has been heaped on the character creation tools, which use scans of real people for extra detail. So why are people using these amazing tools to create white male humans?

Baldur’s Gate 3 developer Larian shared a hotfix update on its Steam blog. Also featured was a social experiment using data from character creation. Larian claims to have taken the most popular character creation choices and applied them to a custom build. Considering the D&D world has dwarves, dragonborn, and devil-like tieflings, one might expect an off-putting amalgamation of parts. Instead, we have what Larian calls “the default Vault Dweller.” 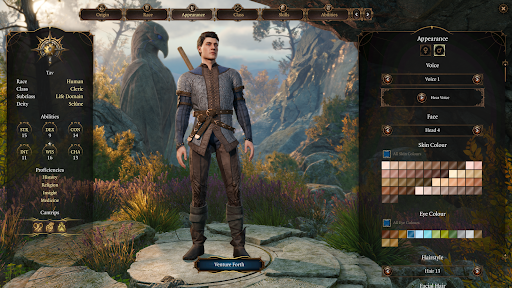 Larian is chastising players in jest, of course, though it does urge players to use some of the more colorful character options by saying “Go crazy. We worked hard on this!”

There are several reasons why the amalgamation of character options turned out so basic. For one, Baldur’s Gate 3 doesn’t have every D&D race. Gnomes, orcs, and popular monstrous races like tabaxi and kenku are nowhere to be found. Some might make it in future updates, but for now most of the options are on the humanoid side.

Another thing to consider is that many people like to play RPGs as characters based on themselves. Since no one is an elf in real life (no matter how long you wear those ears, Jenny), of course we’re going to see a lot of humans being created.

Finally, Baldur’s Gate 3 is still in Early Access. It could be that many players took a default character to jump in, and are saving their more wild creations for future playthroughs with the full version.

Video games are meant to be fun, so by all means play Baldur’s Gate 3 however you like. Even if that means being a basic human cleric. Somebody’s gotta bring the heals.

Related posts:
10/10/2020 News Comments Off on Larian Shares The Most Popular Character Creations In Baldur’s Gate 3, And Y’all Are Basic
Hot News
How To Catch Galarian Articuno In Crown Tundra
League of Legends: Bjergsen Retires After Seven Years With TSM
Sonic Forces: Speed Battle Brings Back Its Spooky Outfits
Necroids Species Pack Brings A Death Cult Of Reanimated Undead To Stellaris
Pokemon Sword And Shield: Seven Free Pikachu Available Now, Here's How To Claim Them
Recent Posts
This website uses cookies to improve your user experience and to provide you with advertisements that are relevant to your interests. By continuing to browse the site you are agreeing to our use of cookies.Ok