Magic the Gathering's card backing is iconic. The five colours on the brown backdrop, the now-outdated 'Deckmaster' logo, it's the kind of design that's recognisable even by people who don't play the game.

And yet, some cards dare to encroach on that sacred space: double-faced cards. Despite all looking similar, double-faced cards are used in very different ways, and knowing the differences between them is essential. 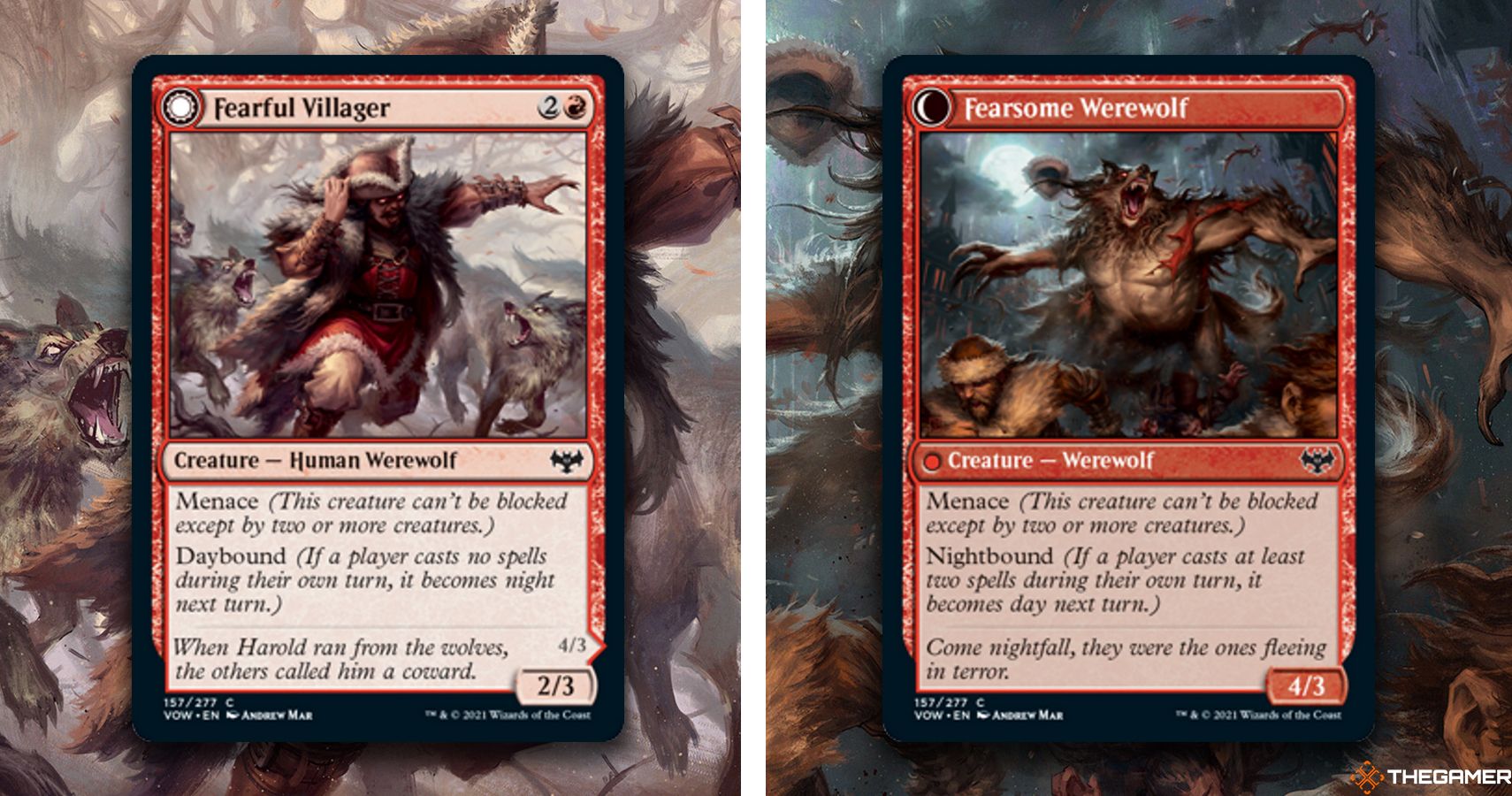 The first double-faced cards to be introduced to Magic came in the original Innistrad set. Wizards of the Coast took a technique used in its Japanese trading card game Duel Masters and printed text on both sides of the card to represent people transforming into monsters and back again (something that happens alarmingly regularly in Innistrad).

Transform is a keyword that just means "turn this card so the other side faces up". While each card has an icon in the top left corner to define if it's the front or the back (such as Innistrad-based sets using a Sun and a Moon, or Ixalan having a compass and a mountain), the front face is always the one with the mana cost.

Transforming cards only count as their front-face when they're anywhere other than the battlefield. If a transforming card is in your hand, library, exile, graveyard, Command zone, or anywhere else, it's only seen as having the properties listed on the front face.

Most cards have how to transform them to their back face written on the card, and it can differ from creature to creature. For example, Nicol Bolas the Ravager will exile himself and return to the battlefield transformed into Nicol Bolas, the Arisen by paying four generic, one blue, one black, and one red mana.

In Innistrad: Midnight Hunt, two new mechanics were introduced that care about transforming. The first is Daybound and Nightbound, which is an attempt to standardise how Werewolves transform by introducing a day/night cycle to the game. All permanents with daybound will be on that face when it is day, and will all transform to their nightbound side when it turns to night be having a player not cast any spells on their turn. Older werewolves weren't errata'd to have daybound and nightbound, but it is expected to be the way they work from now on.

The second way was Disturb, which let you cast a card transformed from your graveyard. In Midnight Hunt they were creatures on both sides and turned into spirits when Disturbed, while in Crimson Vow they started out as spirits and then Disturbed into Enchantments instead. 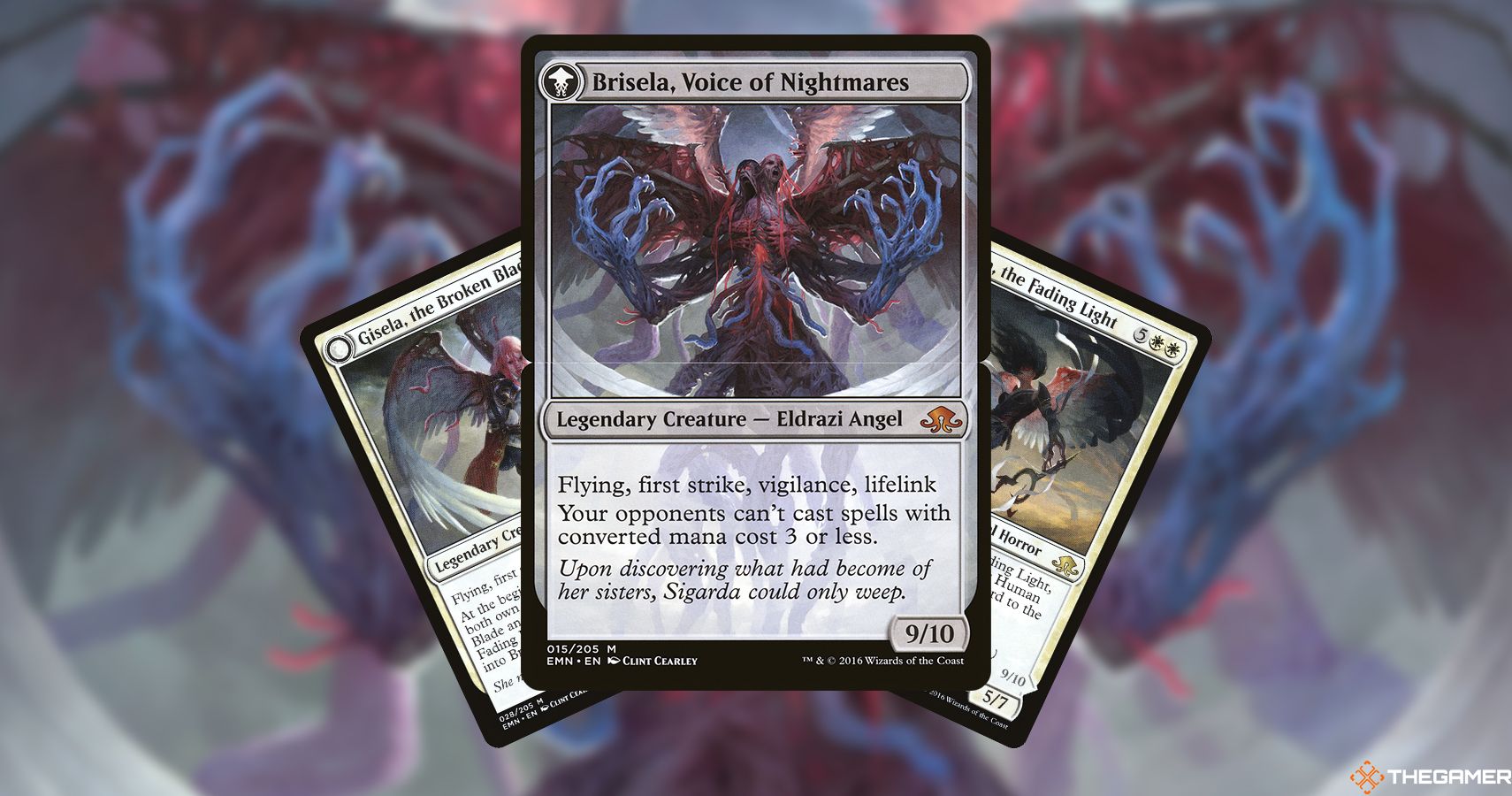 Melding cards aren't considered double-faced cards as far as the game's rules are concerned, but they are cards with two faces, so it's probably still worth mentioning them.

Meld was only used in the set Eldritch Moon, and reflected the corrupting influence the Eldrazi were having over Innistrad. It allows two permanents to 'merge' into a bigger, more horrific entity, like Graf Rats and Midnight Scavengers melding to make Chittering Host. This melded creature is then treated as a single creature that can be enchanted, equipped, and killed like any other, although it will fall apart into two pieces when sent to the graveyard.

Each card in a melded pair will have its normal face and half of a double-sized card on the back, and you must control both halves of it to meld them together. The ways a meld can happen differ. Brisela, Voice of Nightmares is made when Gisela, the Broken Blade and Bruna, the Fading Light are just on the battlefield together, while Hanweir, the Writhing Township is made through an activated ability that melds Hanweir Battlements and Hanweir Garrison together.

Meld cards don't transform, and you can't cast the larger melded side from your hand. As mentioned, they're not even considered double-faced cards like transforming and Modal Double-Faced Cards. 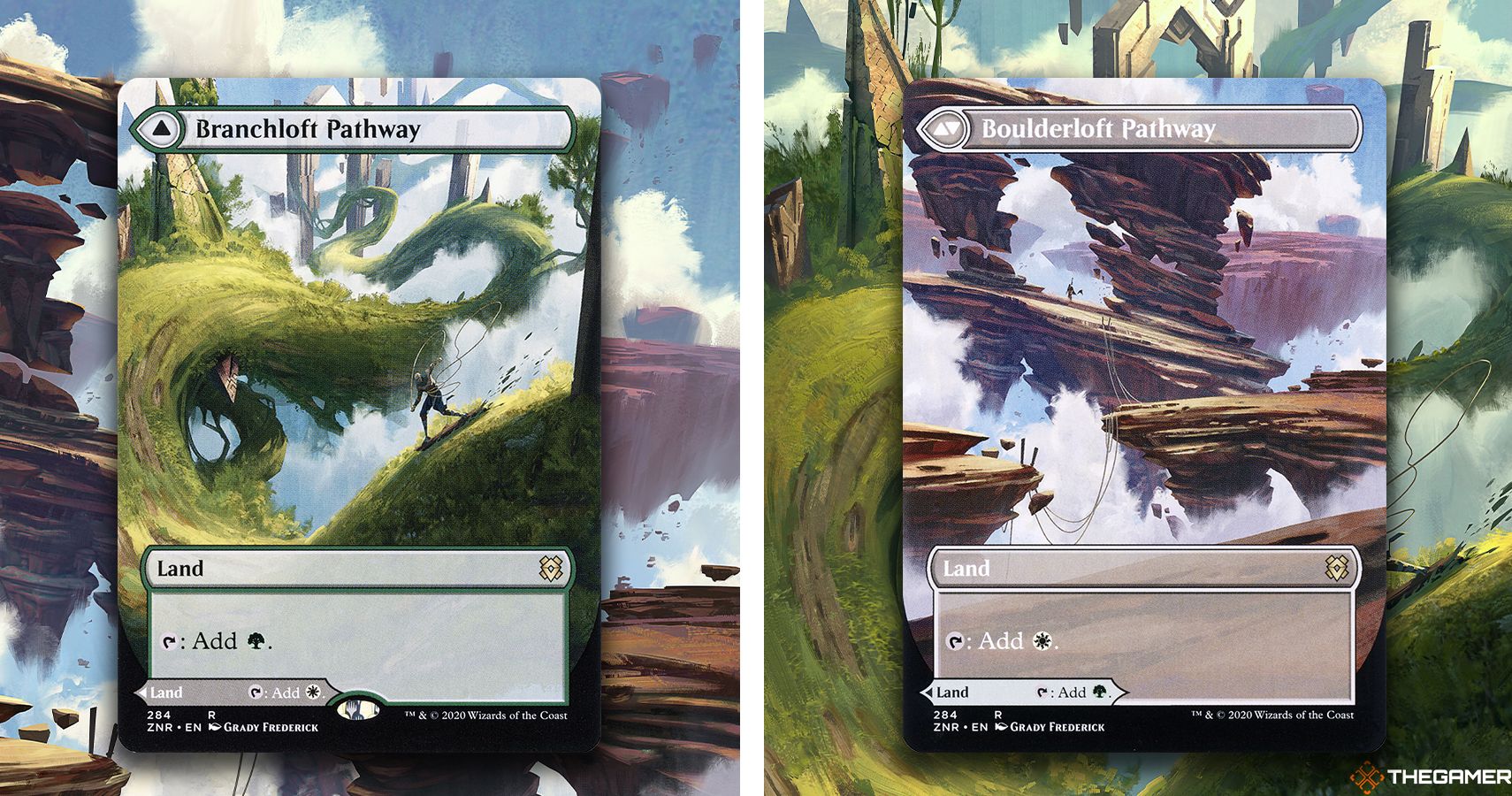 The newest addition to Magic's family of double-sided cards are MDFCS. First introduced in Zendikar Rising, MDFCs differ from transforming cards in that you can play either side from your hand.

While transforming cards are creatures on both sides, MDFCs can be all kinds. In Zendikar Rising they were all lands on at least one side, while in Kaldheim they were used for the legendary creature Gods on one side and a different kind of permanent related to them on the other. In Strixhaven they used a lot of instants and sorceries on one side, and noteworthy students and faculty from the school on the other.

The catch with MDFCs is that there are no ways to transform it once you've played it. Unless you can find a way to bounce that card back to your hand and re-cast the other side, you're stuck with whichever one you played first. If you play an Emeria, Shattered Skyclave early on in the game, you can't then decide you want to cast its other side, Emeria's Call. MDFCs are all about making a choice between what you need now and what you might need later.

Like transforming cards, MDFCs only count as their front face anywhere but the battlefield or the stack. With both sides potentially having a mana cost, it's more important to keep track of the icon in the top left. All MDFCs use one triangle to represent the front face, and two to represent the back.

In Commander, if your Commander is an MDFC, the tax is shared between both sides. If you've already cast Journey to the Oracle from the Command zone in that game, you will then have to pay an additional two mana to cast Jadzi, Oracle of Arcavios or Journey to the Oracle. This is different to Partners, who track the tax independently because they are physically two independent cards. 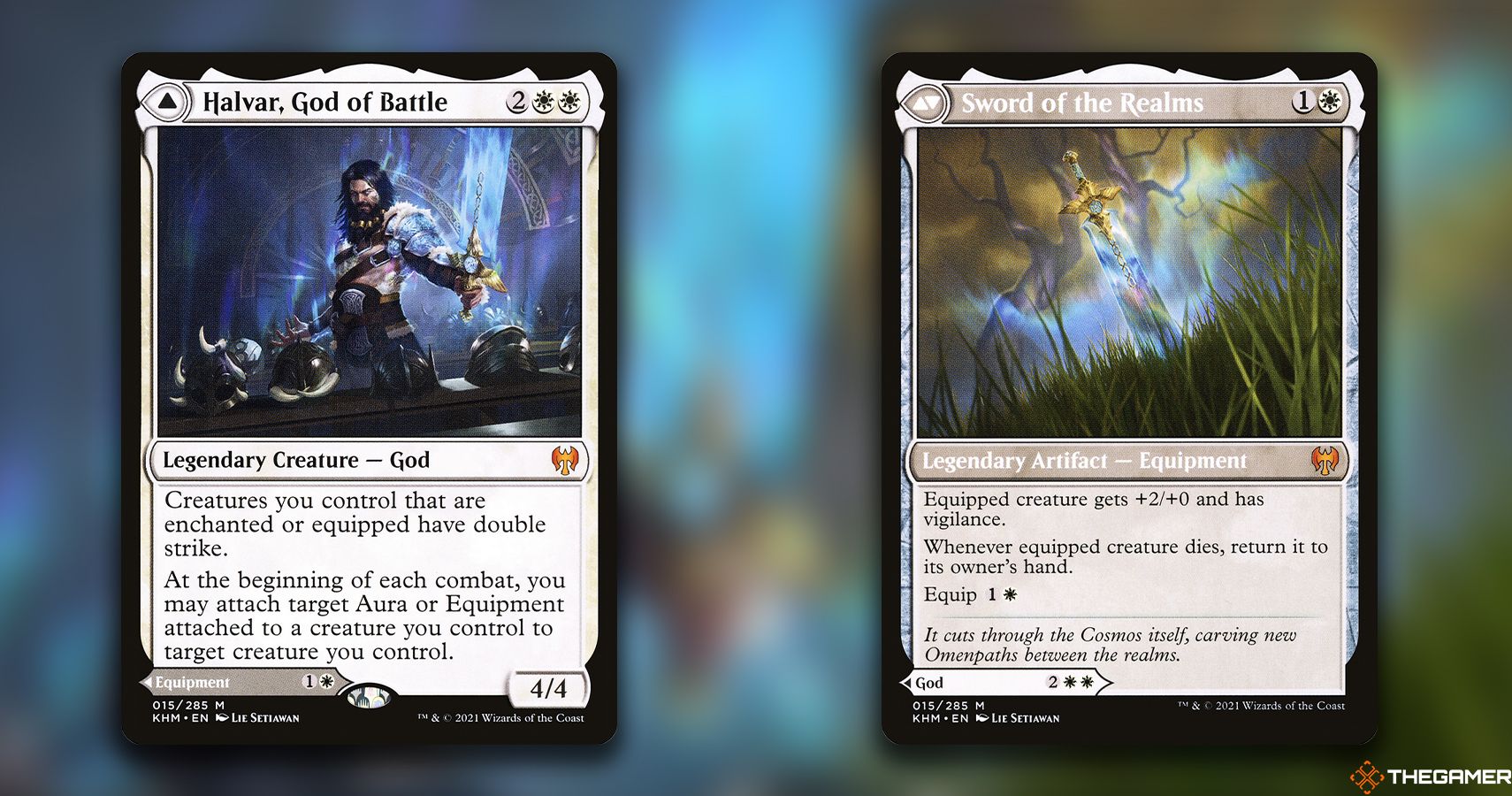 Regardless of if you're playing with transforming cards or MDFCs, there are a few crucial things you remember.

First, because there is information on both sides of the card, you can't play with double-sided cards unsleeved. You have to obstruct your view of one face in some way, whether through sleeves or by using the one-sided tokens included in some booster packs. This is the reason why double-sided cards usually aren't included in preconstructed decks, as they don't come with sleeves and are intended to be played right out of the box.

The other thing to remember is that a card's colour identity is defined by the identity of both faces combined. For formats that care about colour identities like Commander and Brawl, be sure both sides fit entirely within your Commander's identity, otherwise, they are not legal. For instance, Mila, Craft Companion might be mono-white, but its other face, Lukka, Wayward Bonder is mono-red. That means the overall card has a red and white colour identity, so can only be used with Commanders that have red and white in their colour identity (Boros, Mardu, Naya, or Jeskai).

Finally, flickering (exiling and returning to the battlefield) works weirdly for double-faced cards. When one is flickered, it will always return as its front face, with the only exception being permanents with daybound and nightbound, which enter on the side corresponding to if it is currently day or night in the game. The reason this happens is because cards don't retain any knowledge of their past when exiled, and so default back to the untransformed state when they re-enter the battlefield.