As Magic: The Gathering’s Dominaria United preview season rolls into its third day, we enter the usual quiet weekend time. While Thursday and Friday’s previewers were packed, with the debut and Commander deck reveals respectively giving us dozens of new cards, Saturday was a lot different.

Only a handful of cards were revealed, and, surprisingly, all of them can be found in your average Dominaria United Draft Booster. No Commander cards, no Lost Legends, no awkward set symbol confusions, just good ol’ fashioned preview season goodness. And a surprise fourth Planeswalker for the set. 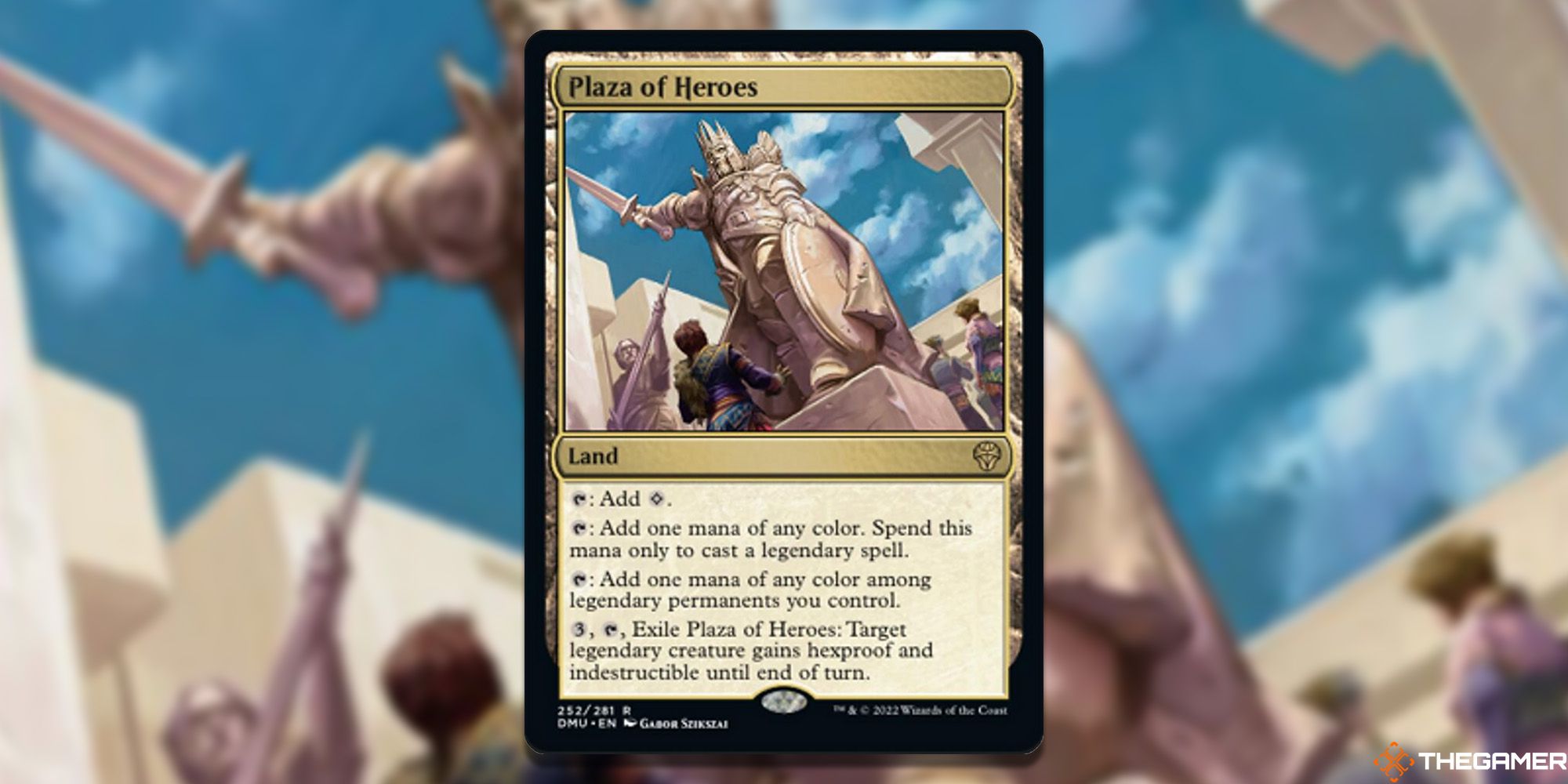 Tap: Add one mana of any colour. Spend this mana only to cast a legendary spell.

Tap: Add one mana of any colour among legendary permanents you control.

It’s incredible looking at this year’s Standard’s manabase and comparing it to last year’s. Not only do we have the New Capenna Triomes and the Innistrad Slow Lands, we now also have this absolute beast of a land that is definitely going to see play in multiple formats.

The most obvious application of this is in Commander, where it has a chance of becoming a new staple on the level of Command Tower. It produces both coloured and colourless mana, and it can even protect your Commander in a pinch. Stock up on this, it’s going to be popular. 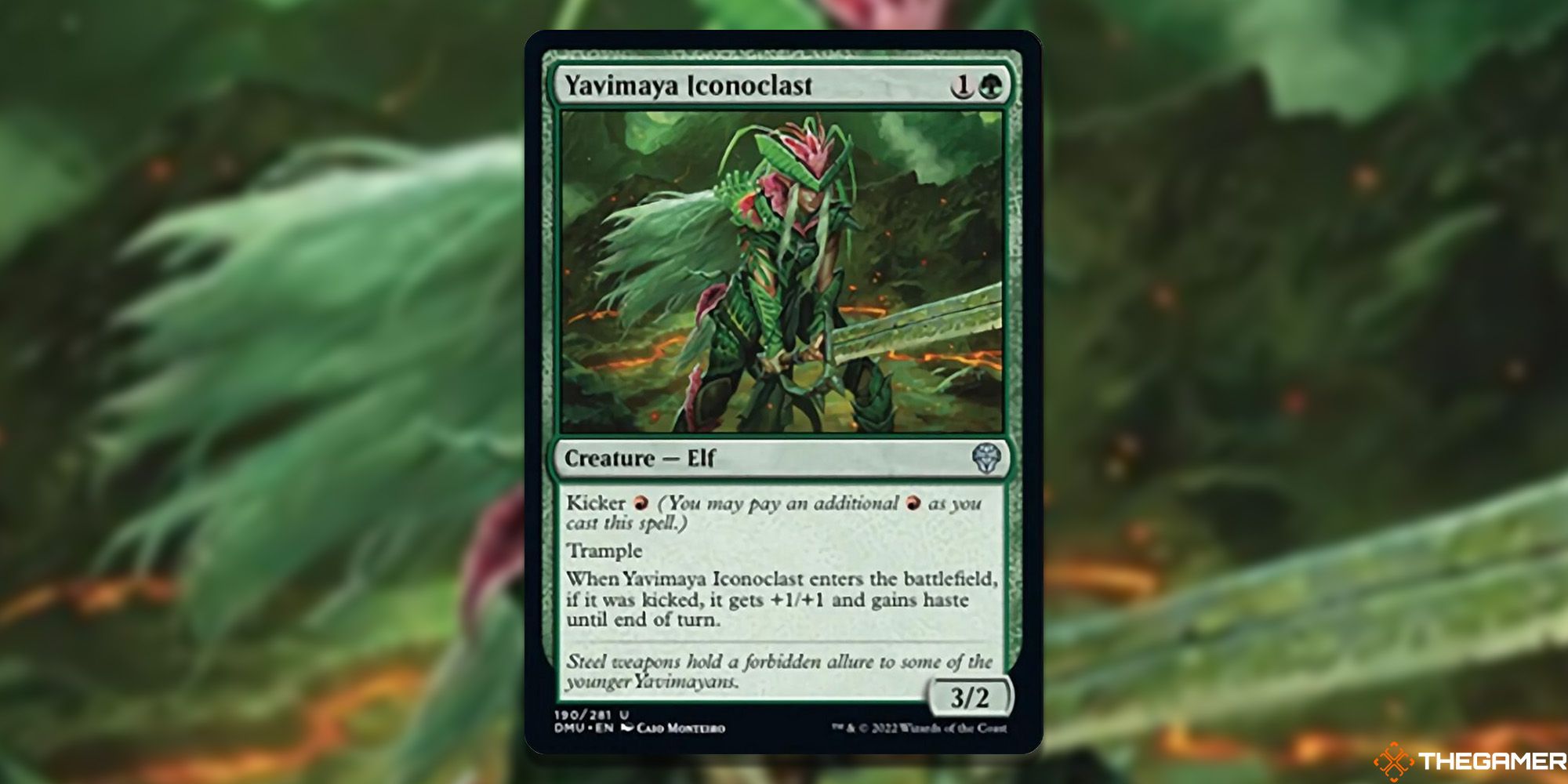 When Yavimaya Iconoclast enters the battlefield, if it was kicked, it gets +1/+1 and gains haste until end of turn.

While we’ve had some confusing applications of kicker in Dominaria United so far, Yavimaya Iconoclast is one of those classic, simple uses that reminds us why the mechanic is such a winner.

On its own, a 3/2 with trample for just two mana is fantastic. But if you’re playing with Gruul colours (red/green), you’ve now got a fantastic turn two or three play that can wallop for a hefty four damage. Stack up a few of these, and Gruul Aggro could be getting some heat in the new Standard. 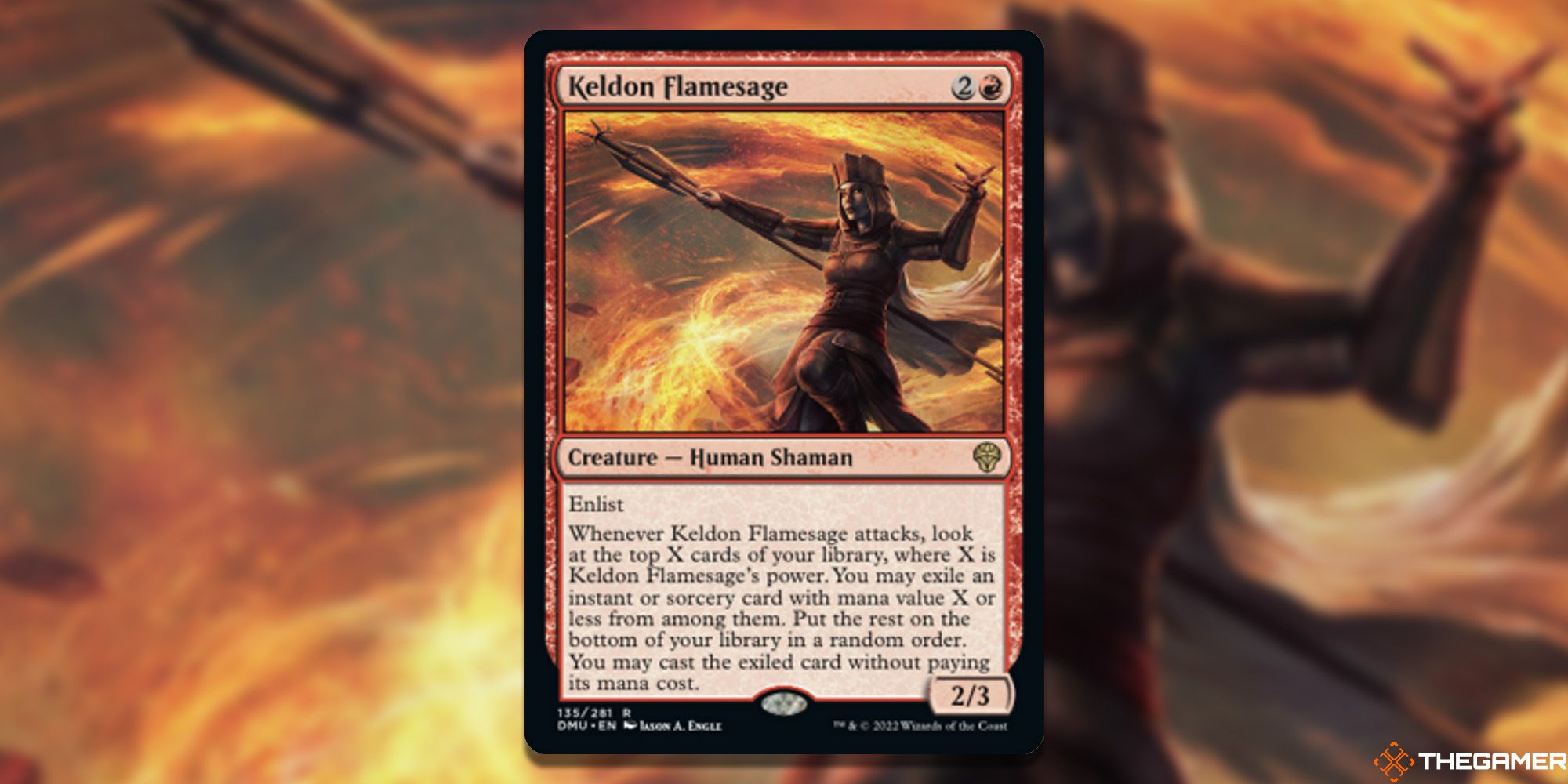 The new enlist mechanic is being put to good use here, as you’re able to combine another creature’s power to Keldon Flamesage’s to sort through even more cards. While attacking does put it in danger, the promise of casting free spells too much of an opportunity to pass up on.

This is also going to likely see some heavy play in Commander. Don’t forget in the last two years we’ve had both Wulfgar of Icewind Dale, and Isshin, Two Heavens As One, which double attack triggers for extra value. A big enough Keldon, a spicy enough spell, and two triggers could make this a new win condition for either deck. 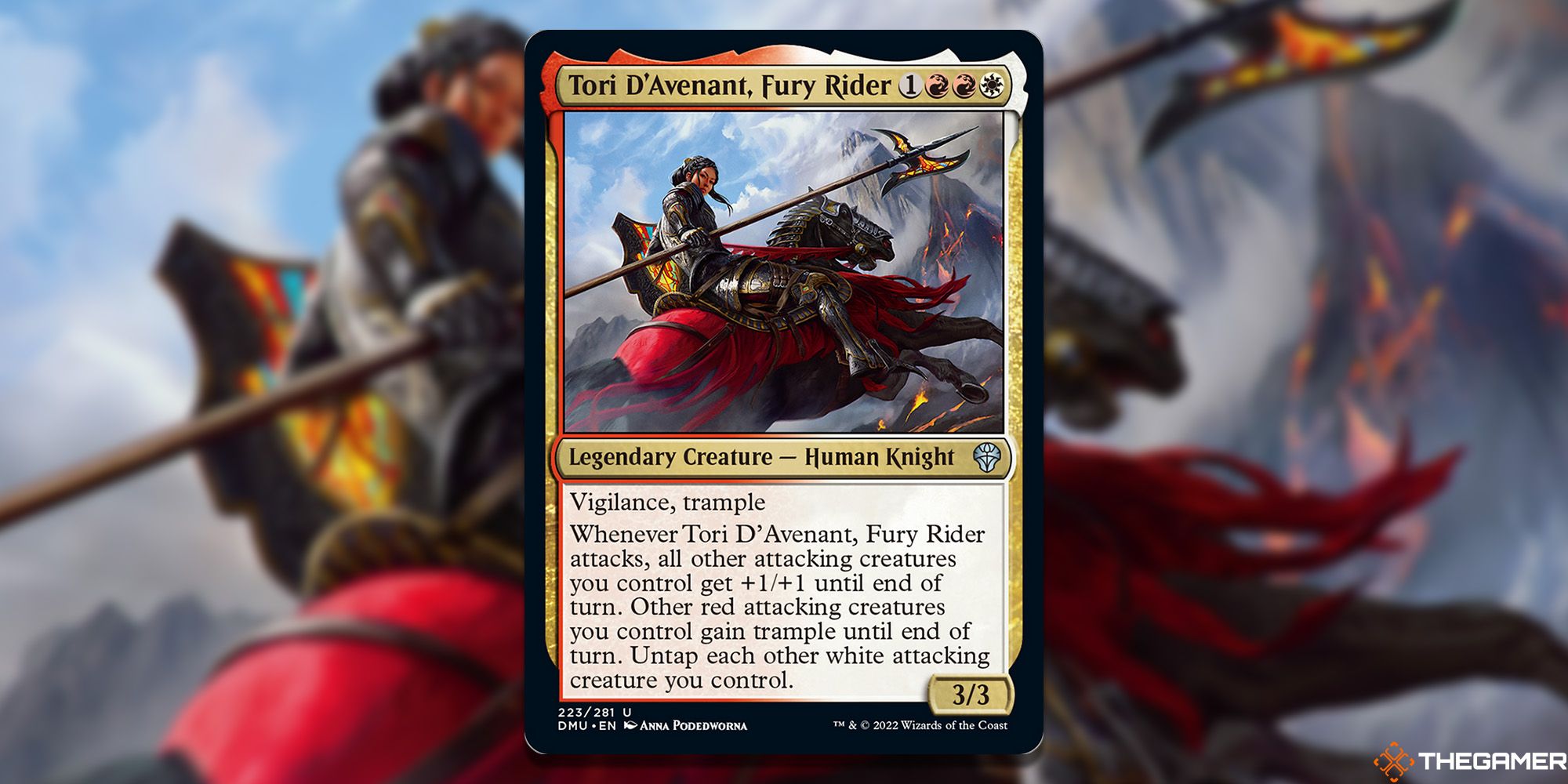 This is a weird card to see hit Standard right now. Any other time, it would’ve been a winner. It buffs both red and white creatures and even untaps the white ones to let them block next turn. It should be good.

However, it’s launching into a Standard format that is, at least partially, defined by the red/white samurai of Kamigawa: Neon Dynasty. A tribe whose entire mechanical space is in attacking alone. A lot of the good red and white creatures you’d want to swing out with are practically useless if Tori attacks with them, and Tori only buffs them if she’s also going in for damage.

It’s also coming in the same set as enlist, a primarily white mechanic. While the temptation would be to attack with everything, have Tori untap the white creatures, and then use them to enlist, it doesn’t work. You can only enlist creatures that aren’t attacking, who remain completely outside of Tori’s purview.

Practically every other format is going to benefit from Tori. Commander (especially, again, with Isshin, Two Heavens As One) and Pioneer in particular will give her a chance, and she may prove herself. But for Standard, she’s too expensive and too incongruous 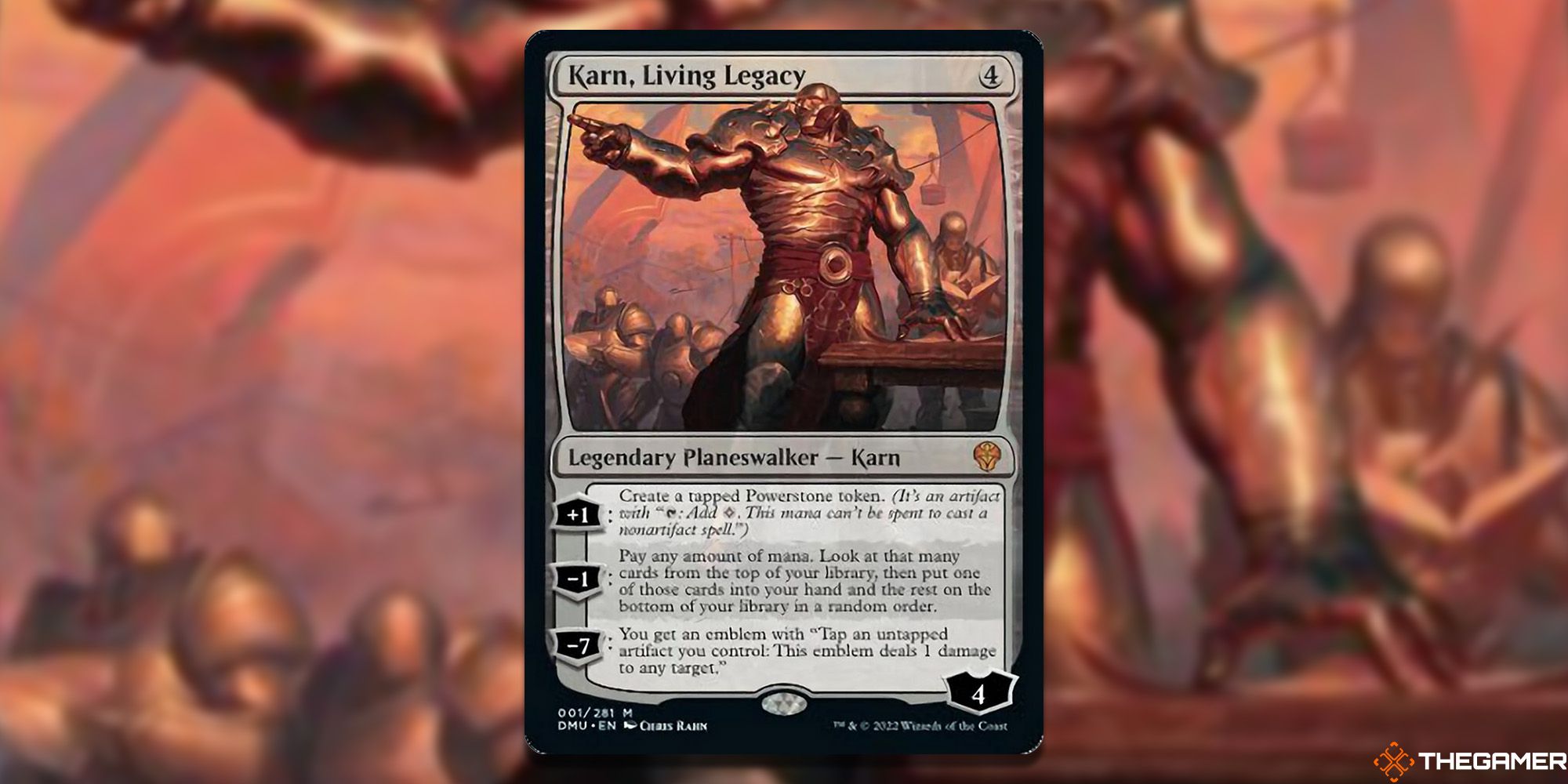 +1: Create a tapped Powerstone token. (it’s an artifact with “tap: add one colourless mana”. This mana can’t be spent to cast a nonartifact spell.”)

-1: Pay any amount of mana. Look at that many cards from the top of your library, then put one of those cards into your hand and the rest on the bottom of your library in a random order.

-7: You get an emblem with “Tap an untapped artifact you control: This emblem deals one damage to any target”.

We really should’ve seen a new Karn planeswalker card coming. After all, he’s the main character of the story, takes pride of place on the main set art, and is one of Dominaria’s most stalwart defenders. And yet to see Karn be revealed on day three of previews feels slightly odd.

Regardless, this take on Karn is interesting. The first ability produces an artifact token that, in certain affinity- or artifact-themed decks could be very powerful indeed. The second ability is could easily allow you to skip straight to your deck’s win condition, and can be triggers as soon as Karn’s entered into play.

The last ability, while difficult to build up to, is a win condition in and of itself. Every single artifact, be it a Treasure token or a Celestus, could be used to ping your opponent. In a Standard and Pioneer meta currently dominated by the red/black Rakdos Midrange decks and their heavy use of Blood tokens, this could be terrifying. In Commander or other eternal formats, you’ve got things like Academy Manufactor that can easily produce enough artifacts to kill your opponent with straight away.

This isn’t the best Karn planeswalker card ever printed – it’s a little smaller than we normally expect from him – but it fills a very interesting strategic role that could see Living Legacy impact multiple formats at the same time.