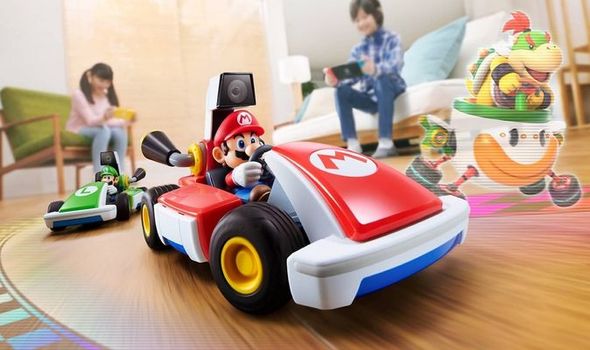 From a bizarre fitness role-playing game starring a body building dragon, to a range of cardboard gaming accessories that you build yourself, Nintendo is a company that never fails to surprise its fans.

A real-life Mario Kart game where you race toy cars around the home using the Nintendo Switch as a controller is the latest in a long line of eyebrow-raising releases from the Kyoto gaming company.

However, when something works as smoothly and seamlessly as Mario Kart Live: Home Circuit (for the most part, at least), perhaps it’s more surprising that this wasn’t attempted sooner.

Available for around £100, Mario Kart Live: Home Circuit comes with either a Mario or Luigi toy Kart, as well as four gates that can be placed around the house in order to create your own courses.

It also comes with two arrow markers and a USB charging cable, and, well, that’s really all there is to it.

Setting the game up is as simple as downloading the free Mario Kart Live app to your Switch console, and then following the straightforward instructions to build a course and start a race.

For something so ingenious, it really is remarkable how quick and easy it is to get started.

Not only is it easy to set up, but Mario Kart Live feels surprisingly responsive to control and play. There are exceptions, which I’ll discuss shortly.

Via the magic of augmented reality, the kart’s on board camera transforms your room into a virtual race course on the Nintendo Switch in real-time.

Discarded socks, old shoes and chair legs suddenly become obstacles in your real-world race courses, while a little AR fairy dust makes it look like you’re racing within an 8-Bit Mario world, construction zones, underwater and even in the snow.

Some courses feature their very own environmental hazards, such as Magikoopas that invert your camera and controls, and Boos that momentarily possess your screen, making it difficult to see where you’re going.

That’s on top of classic Mario Kart power-ups that can give your toy kart a speed boost, slow it down, or make it stop altogether.

With a Grand Prix mode featuring countless cup competitions in 50cc, 100cc, and 150cc difficulty levels, there are times when it really does feel like you’re playing a proper Mario Kart game.

Sadly, the illusion is shattered when you fall foul of one or two unwanted issues. Firstly, in order to really get the most out of Mario Kart Live: Home Circuit, you’ll need plenty of flat, smooth floor space.

Creating a few basic courses within a smaller environment will give new players that initial wow factor, but it doesn’t take long before you start to crave something a bit more substantial.

Having too small a play area and lack of floor space doesn’t just stifle your creativity, but it also results in clumsier races where you’re more likely to crash into obstacles. This in turn makes it difficult to gather any real speed and momentum.

It’s particularly problematic if your teeny courses have any tight turns, because you’re likely to miss a gate or two.

You’ll also need to weigh down your cardboard gates, or risk pushing them out of position when you bash into them. It’s not a criticism, just something you need to be aware of when setting up your courses. 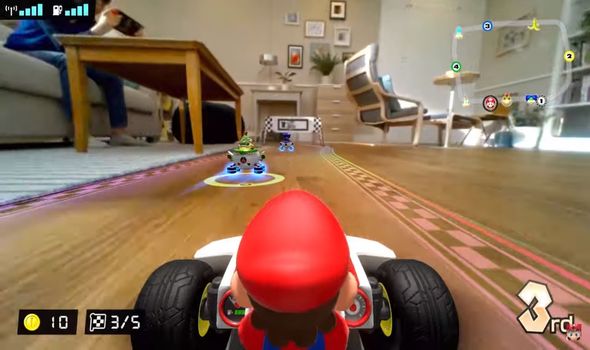 Speaking of setting up courses, creating new circuits does feel like a bit of a chore at times, although thankfully it’s not actually required from race to race.

While it’s not something I’ve been able to experience first hand, there’s also a sense that Mario Kart: Home Circuit would be better with multiple players – just like a traditional Mario Kart game.

Not only does this require another Home Circuit set – one person could buy Mario and the other Luigi – but you’d also need a second Switch.

If you and a friend or sibling both already own a Nintendo Switch, then getting a couple of Home Circuit sets is an attractive, albeit expensive option.

It’s no coincidence that the game launched in October, because Mario Kart Live Home Circuit feels like the perfect Christmas gift for gaming fans.

It doesn’t quite hit the same heights as a regular Mario Kart game, but provided your home meets the correct race requirements, this is another podium finish for Nintendo.

Related posts:
10/27/2020 News Comments Off on Mario Kart Live Home Circuit Nintendo Switch review: Lots of fun, but with one fatal floor
Hot News
5 Hidden Gem Games You Missed In 2020
2019 Was a Major Inflection Point for VR—Here's the Proof – Road to VR
Fallout 76 Steel Dawn: How To Get The Hellstorm Missile Launcher
The VR Game Launch Roundup: Breaking out the Big Guns
Online Roleplaying Community Platform Role Opens For Early Access
Recent Posts
This website uses cookies to improve your user experience and to provide you with advertisements that are relevant to your interests. By continuing to browse the site you are agreeing to our use of cookies.Ok