In Mass Effect 2, you recruit a number of different characters for a suicide mission to take down the Collectors who have been abducting humans for unknown reasons. To ensure your crew is ready, you need to earn their loyalty by completing personal missions for each companion, one of which will be for your token scientist salarian, Mordin.

His mission is called 'Old Blood', which involves rescuing an old colleague of his from some krogan on Tuchanka. However, things are more complicated than they seem, which will be discussed later on in this walkthrough of Mordin’s loyalty mission.

How To Start 'Old Blood' 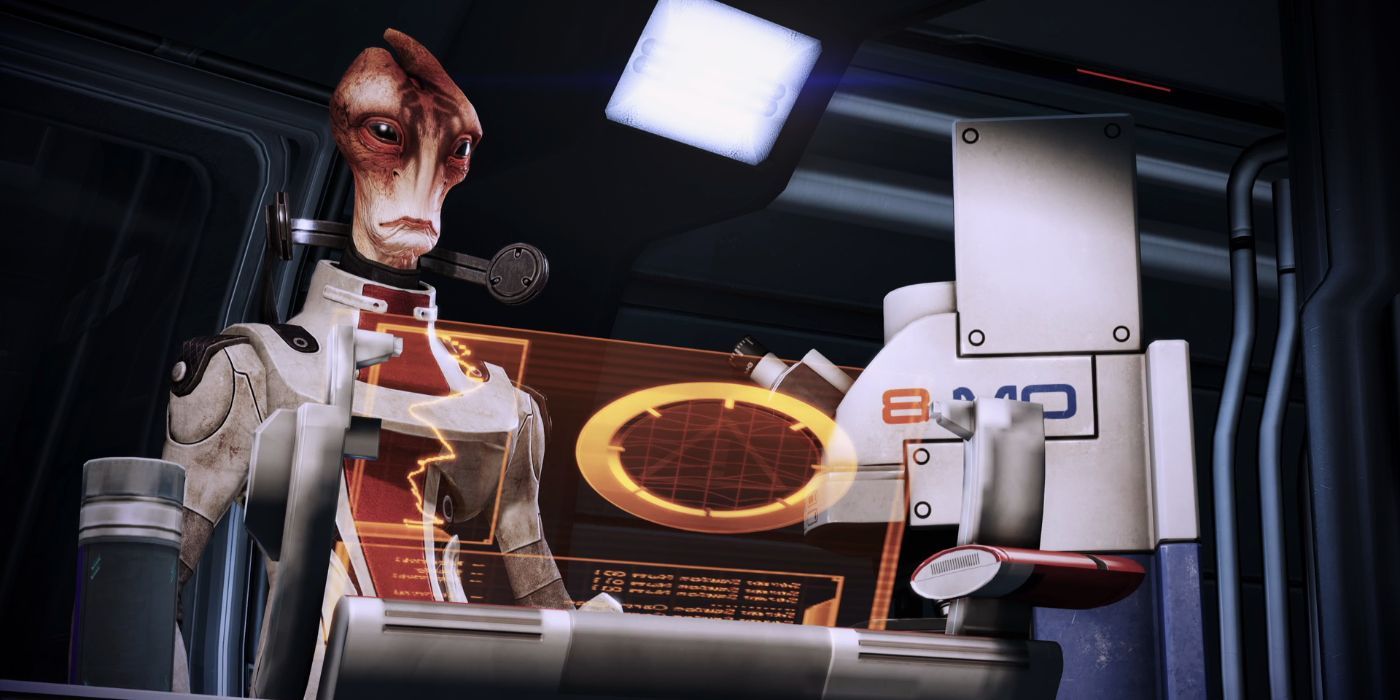 After you complete the 'Horizon' mission, you’ll see this mission pop up in your journal saying “Mordin wants to talk with you”. He can be found in his usual spot in the research lab on deck two of the Normandy.

When you talk to him, Mordin will explain that he was a member of a Salarian STG squad tasked with modifying a new strain of the Genophage after the krogans started adapting to the old one. Regardless of your opinion on the matter, he’ll then tell you that his former protégé, Maelon has been kidnapped by the Blood Pack and was last seen on Tuchanka. Naturally, you're going to want to help your buddy out, right?

After you finish the conversation, head to Tuchanka and talk to the leader of Clan Urdnot (either Wrex or Wreav, depending on if the former survived Virmire in the first game). He’ll point you to the Chief Scout located straight ahead, just past the barren pit. Alternatively, you can just go straight to the Chief Scout if you have already introduced yourself to the clan leader.

Ask the Chief Scout about Maelon and he’ll say that it's likely that rival Clan Weyrloc has him at their base in an abandoned hospital. When you’re done talking, say that you’re ready, and you’ll enter the prep phase.

The Chief Scout also tells you that a scout he sent went missing, starting the 'Tuchanka: Old Blood: Missing Scout' assignment, which you can complete during this loyalty mission.

You’ll be fighting Blood Pack mercenaries during this mission, which consists of barren, vorcha, and a lot of krogans. These guys are hard hitters that pound you into submission. Thankfully the mission plays into Mordin’s strengths as most of the enemies are weak to his incinerate and cryo blast.

As for who to pair with Mordin, it’s good to pick someone that complements his pros and makes up for his cons. We recommend any of the below companions: 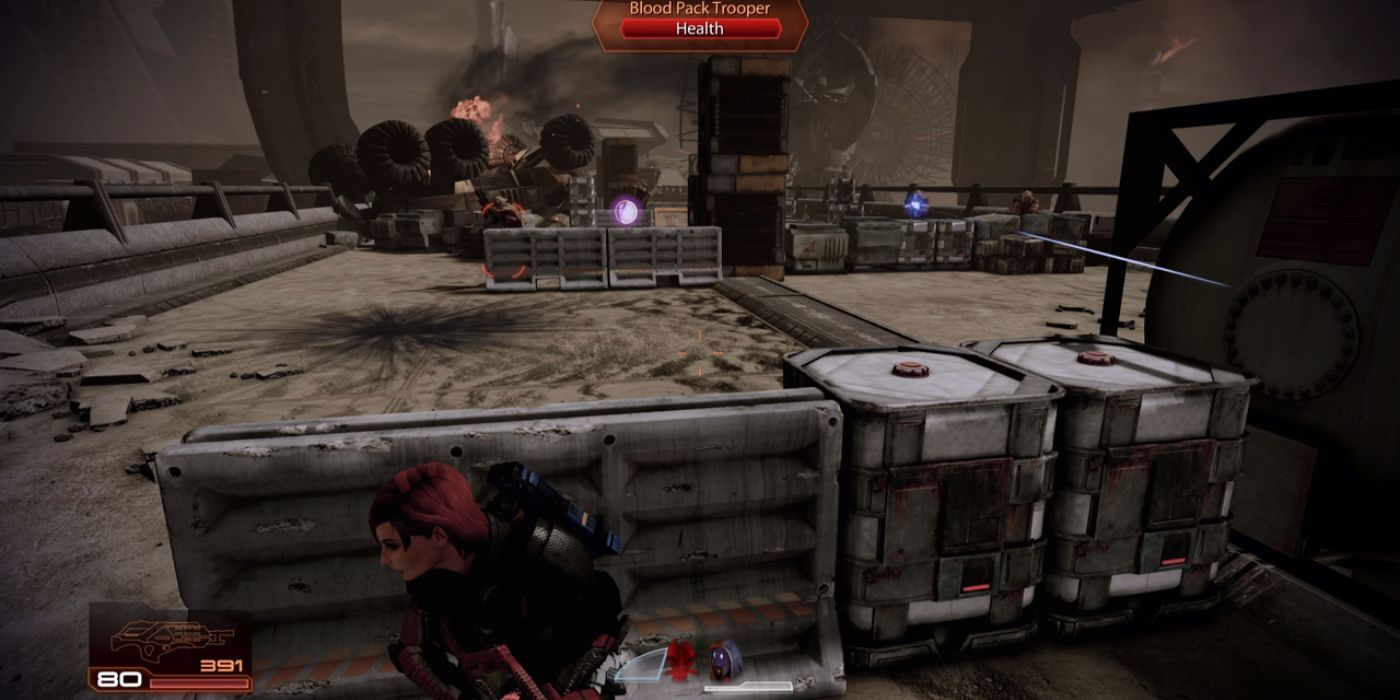 When you arrive, you’ll have to deal with some Tuchanka wildlife. It’s an open area but you’ll eventually approach a bridge where Blood Pack mercenaries will try to stop you.

Both vorcha and krogan can regenerate health quickly, so make use of those fire abilities to stop that.

Once you’re past the bridge, move forward and take a right, where you will see the entrance to the hospital. You’ll also see a crashed vehicle where you can loot some power couplings — get these, so you can give them to the mechanic when you get back to the Urdnot camp.

Open the door and head down the stairs. At the bottom, you’ll find a human body that will trigger a cutscene where Mordin analyses it. After the scene ends, move ahead until you reach a door. 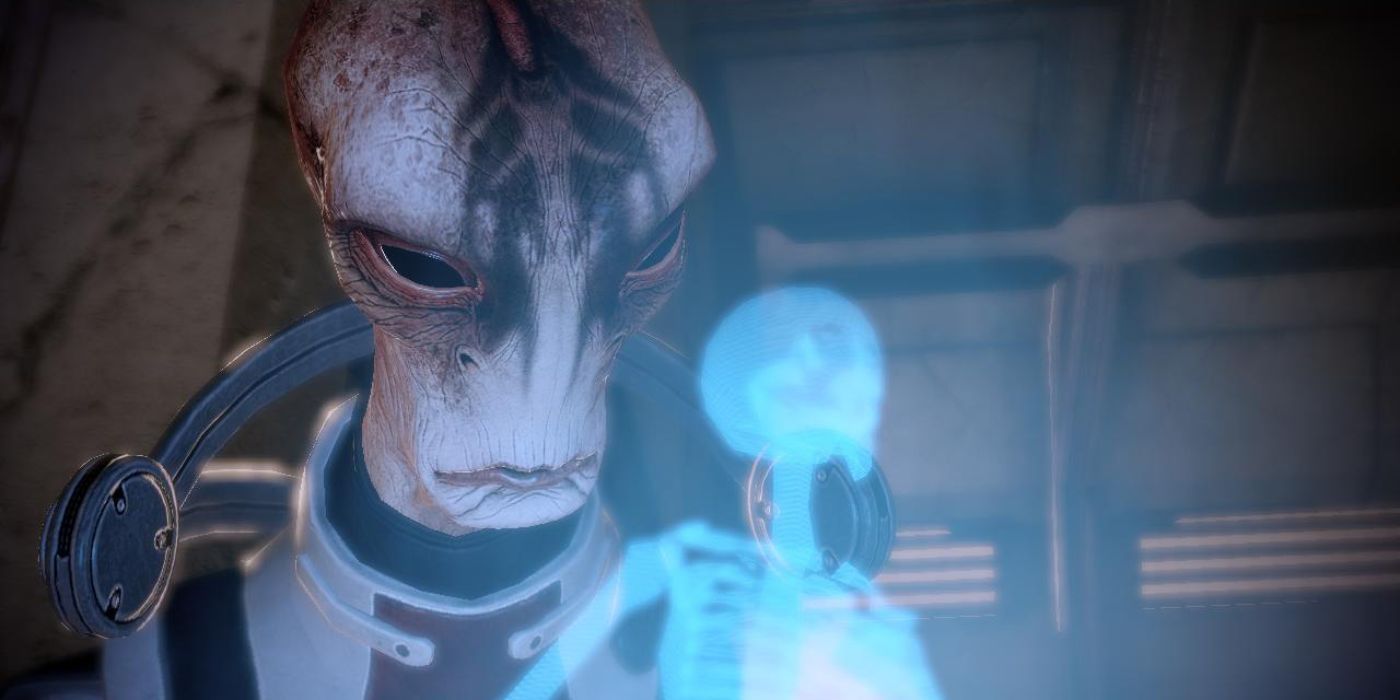 Another cutscene will play when you open the door, where you'll see the speaker for clan Weryloc confront you with two krogans beside him. You can try to convince him to stop what he's doing, but he is will not be deterred and will begin to talk about what the clan will do to the rest of the galaxy once the Genophage is cured.

This is when a renegade interrupt prompt appears that just begs you to press it since it goes on for a solid minute. We recommend pressing it as doing so will have you shoot the gas canister and take the speaker out in one hit. After that, more enemies will come crawling in, and annoyingly, they have an aerial advantage over you. Stick to the cover and keep that Medi-Gel handy. Once your enemies are eliminated, head up the nearby stairway and continue along. 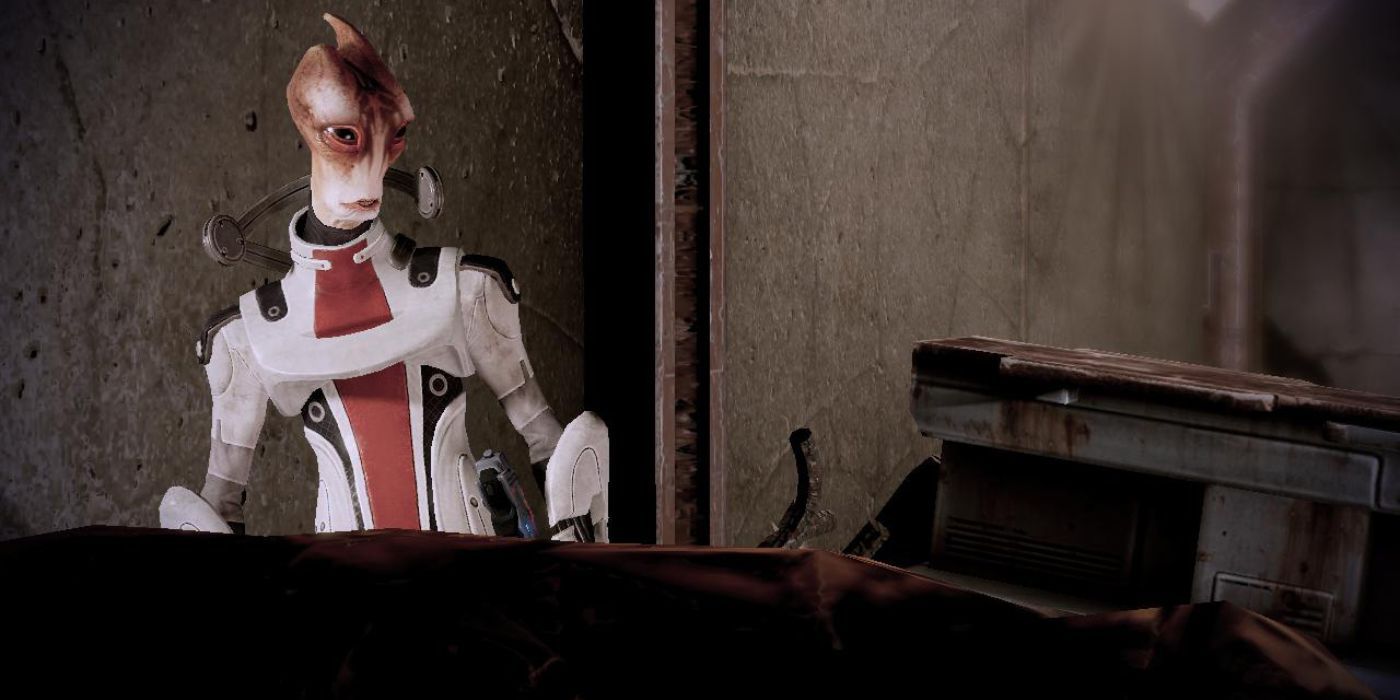 Eventually, you’ll reach a lab where you can interact with a terminal and dead female krogan to get some insight into Mordin’s past and debate with him the ethics of what he’s done.

Once you leave the lab, you’ll find a door on the right that can be bypassed. This is where the missing scout is located for the 'Tuchanka: Old Blood: Missing Scout' assignment. You’ll have to convince him to leave, and after you do so, go straight from the door.

A large room greets you where there are plenty of enemies and gas canisters that you can shoot. Your enemies can hit these canisters as well, so be careful in this area as you can quickly find yourself on the receiving end of an explosion.

Continue down the stairwell, where eventually you will encounter Weyrloc Guld. He is a krogan who uses biotics along with a barrier and armor for increased protection. Keep your distance from him as he thrives in close-quarter combat. Wear down his barrier and armor with a mix of tech and biotic abilities to expose his health to finally take him down.

Finally, head through the door to be in the last area of the mission. 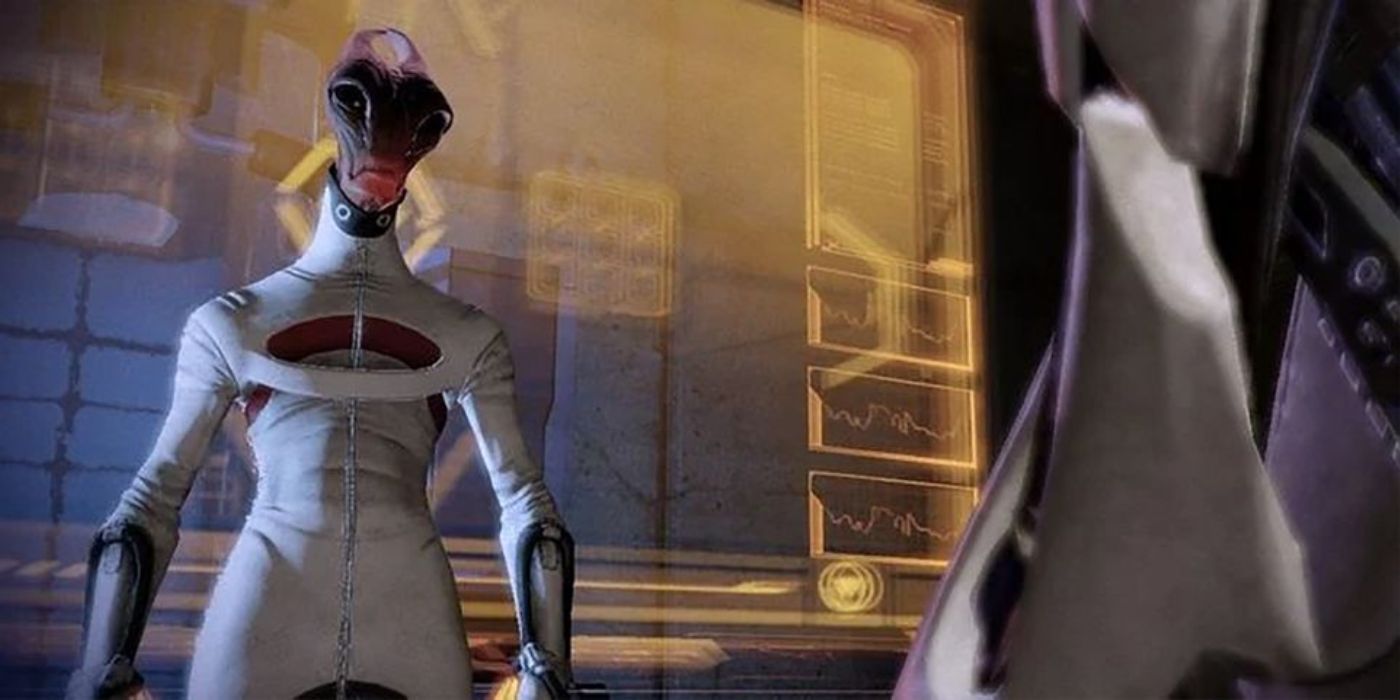 In this room, you will finally encounter Maelon, who is not only alive but surprisingly unharmed, much to Mordin’s confusion. It becomes clear that Maelon wasn’t kidnapped, but that he came here of his own free will to help cure the Genophage.

An argument breaks out and you'll have to decide what to do with Maelon. Mordin will pull a gun on his former protégé, triggering a paragon interrupt prompt to appear. If you want to spare Maelon, hit the corresponding button. After Maelon is dealt with, it’s time to deal with one last thing — the data he got from his experiments.

Should You Save Or Destroy The Data? 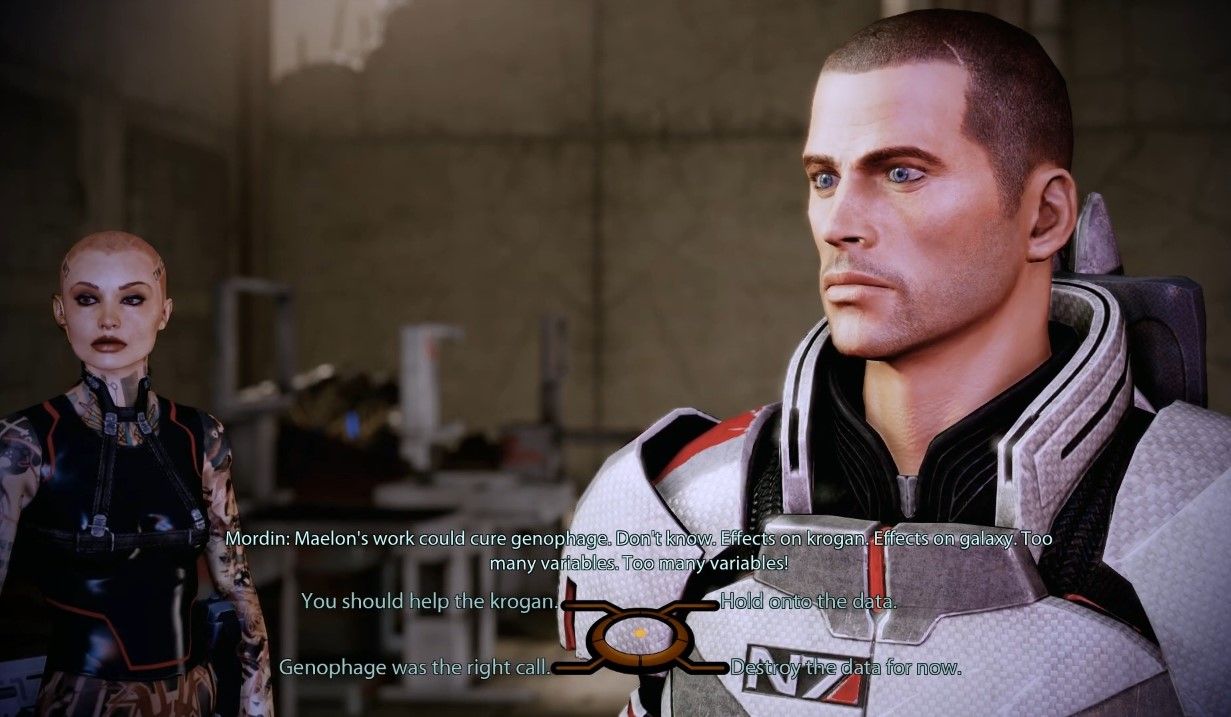 From here you can either keep or destroy Maelon’s findings. This choice does have ramifications for Mass Effect 3 so bear that in mind when deciding what to do. You'll also earn Renegade or Paragon Points based on your choice.

Regardless of your decision, Mordin will now be loyal to you and the suicide mission. In terms of rewards, you’ll get the usual XP and credits, and you’ll get a new outfit for Mordin as well as unlock the neural shock ability for use.