The need to constantly tend to your crops and animals in Minecraft is one of the more tedious parts of the game, requiring you to regularly step away from your other tasks to harvest, plant, breed and slaughter in order to not starve to death. Wouldn’t it be so nice to not have to worry about starvation, without the need to constantly stay on top of your farming and animals? Well, you can, and it is in fact very simple.

This fully-automated chicken farm will constantly supply you with pre-cooked chicken, meaning you will not need to worry about using up your fuel supply, nor will you have to worry about breeding or slaughtering. This machine does it all on its own. It works by taking the eggs that chickens lay and firing them out of a dispenser. When the egg lands, it has a chance of spawning a baby chicken, which will patiently sit underneath a suspended lava source. After 20 minutes, it will grow up to be an adult chicken and will be tall enough to reach the lava, killing it immediately. It will drop cooked chicken due to its fiery death and will collect into a chest.

How To Build The Cooked Chicken Farm

To begin, place your chest wherever you’d like your collection point to be and attach a hopper to the back of it. Place a slab on top of the hopper. This slab is what the chickens will be dying on, and because it is only a half-block, items that sit on top of it can be collected through the block. Place two glass blocks on top of the chest, the dispenser behind the slab, facing into it, then a hopper on top of that dispenser. Don’t bother placing the glass to the sides of the slab just yet. The hopper is where the chickens will be standing, so box it in with some glass so they aren’t able to run away. Place some more glass around where the lava will be (directly in front of the hopper), then place lava by right-clicking on the top of the slab with the bucket. 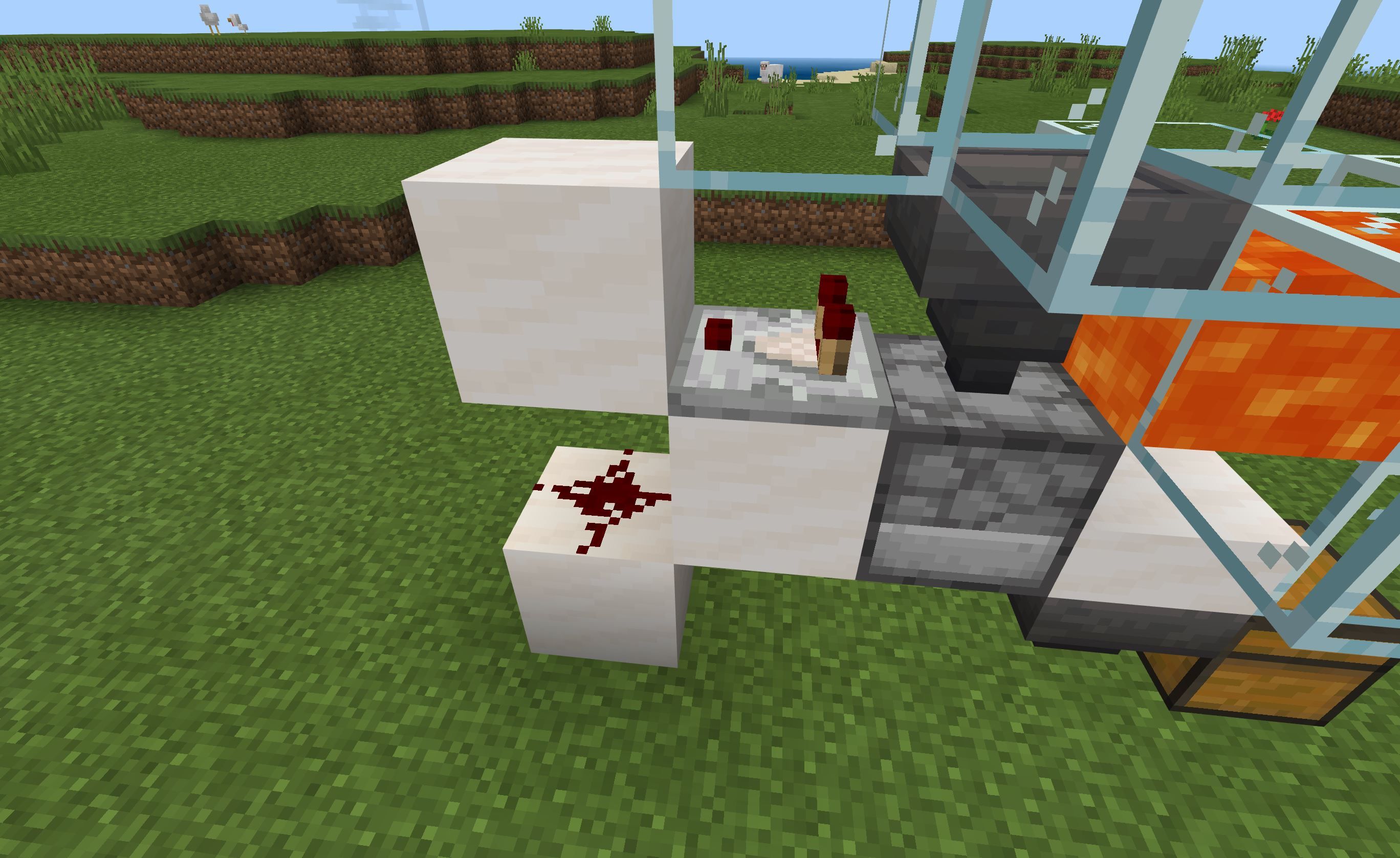 Now for the hard part: luring some chickens up into the hole. You may want to place some slabs on top of the glass blocks in order to make the hole deeper, so that once the chickens fall in, they can’t escape. Alternatively, you can place the fence post early and then throw eggs into the hole until you get at least two chickens, then breed them. Regardless, once you have chickens in the hole, block off the top of it with a fence post. This will leave a space open to allow you to breed the chickens with seeds. The more chickens in the hole, the more cooked chicken you will accumulate. Whenever an egg is fired, there is a random chance that baby chickens will spawn on the slab. Because there is no where for them to run, they will stand perfectly still in the center of the slab. Twenty minutes later, they will grow into an adult and get cooked by the lava above them. To finish the build, place the two glass blocks to the sides of the slab to prevent baby chickens from running away. Related posts:
09/28/2020 News Comments Off on Minecraft: How To Build A Fully Automated Cooked Chicken Farm
Hot News
Assassin’s Creed Valhalla Crosses Over With Popular Manga (And You Can Read It For Free)
Washington Justice Re-sign Decay After Strong Finish In 2020
Kafei & Anju From Majora’s Mask Are Still My Favorite Zelda Couple
Ubisoft Shares Next Gen Features For Watch Dogs Legion, Far Cry 6, And More
Valorant First Strike streaming schedule and open qualifier bracket
Recent Posts
This website uses cookies to improve your user experience and to provide you with advertisements that are relevant to your interests. By continuing to browse the site you are agreeing to our use of cookies.Ok