One of the most popular card games throughout the world is that of Yu-Gi-Oh! It’s hard to not see the appeal as the game not only invites every player to collect cards and form their own unique decks but also to then test those decks against their friends. It combines some of the best aspects of fan-favorite series like Pokemon, except instead of adorable creatures, players find their favorite duel monsters.

Yu-Gi-Oh Legacy Of The Duelist Link Evolution is often regarded as an incredible Yu-Gi-Oh game by fans thanks to its huge list of cards and duels from the anime that players can relive. Just as some of those classic duels weren’t easy for the participants, the same is true for players who make their way through the game’s numerous campaigns. 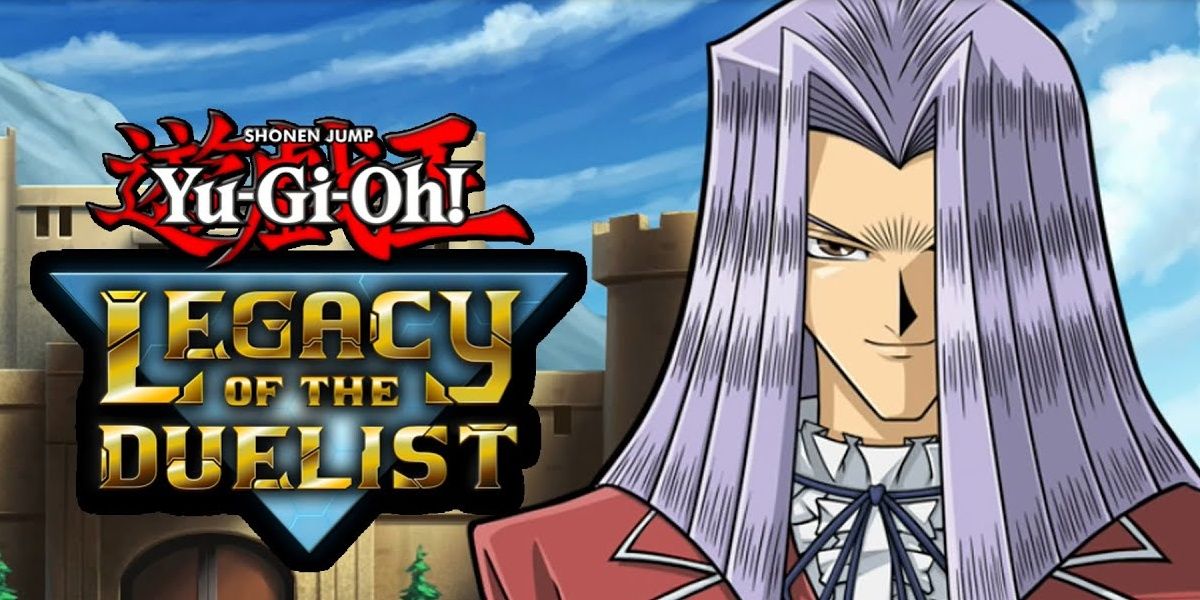 While some had no problem with this duel in their playthrough, that is often because they had everything they needed for victory from the start. Pegasus is an opponent that utilizes a deck that isn’t overly troublesome, but that doesn’t mean he doesn’t have some tricky cards.

His toons aren’t much of a problem, but his Relinquished monster can be a pain. This duel practically forces the player to summon Yugi’s Magician Of Black Chaos, a card that can be dealt with quickly if a player doesn’t have a plan to deal with Relinquished. 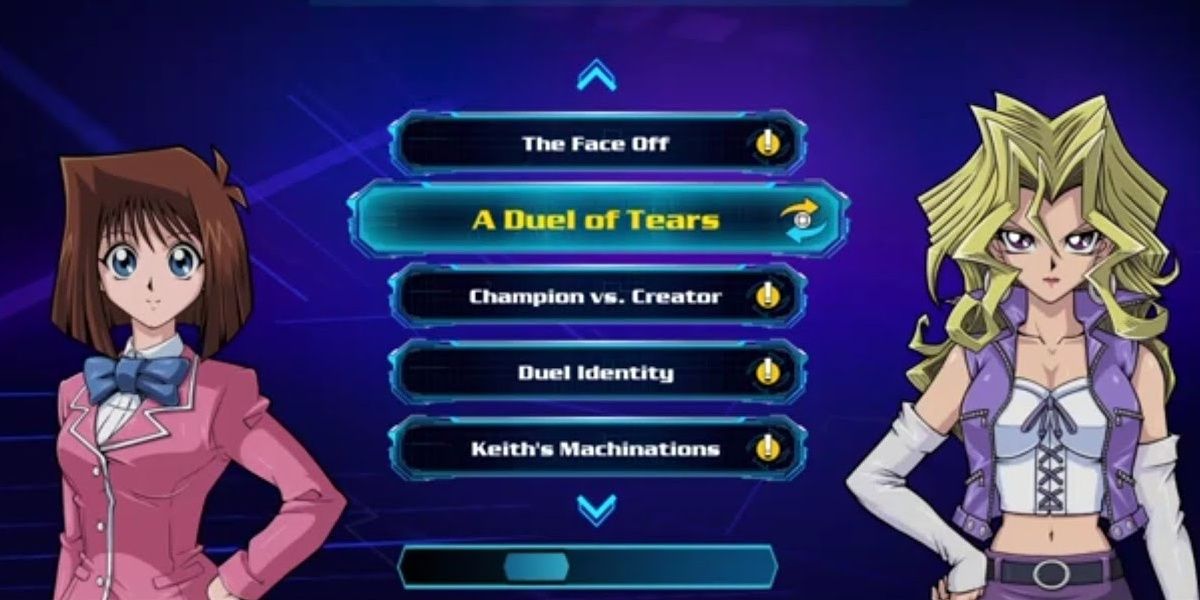 When playing through this duel in its original form, it’s entirely possible that players managed to completely steamroll Mai before she was able to do anything. When players finally got around to playing the game's reverse duels, it’s entirely likely that this duel was a nightmare.

The game's RNG already seems to heavily favor the AI, but throw in a deck that allows Tea to get a monster with upwards of 4000-6000 attack out on her first turn, and things get irritating. The player's only real hope is to get the Harpie’s Feather Duster, but that game RNG isn’t going to be in your favor. 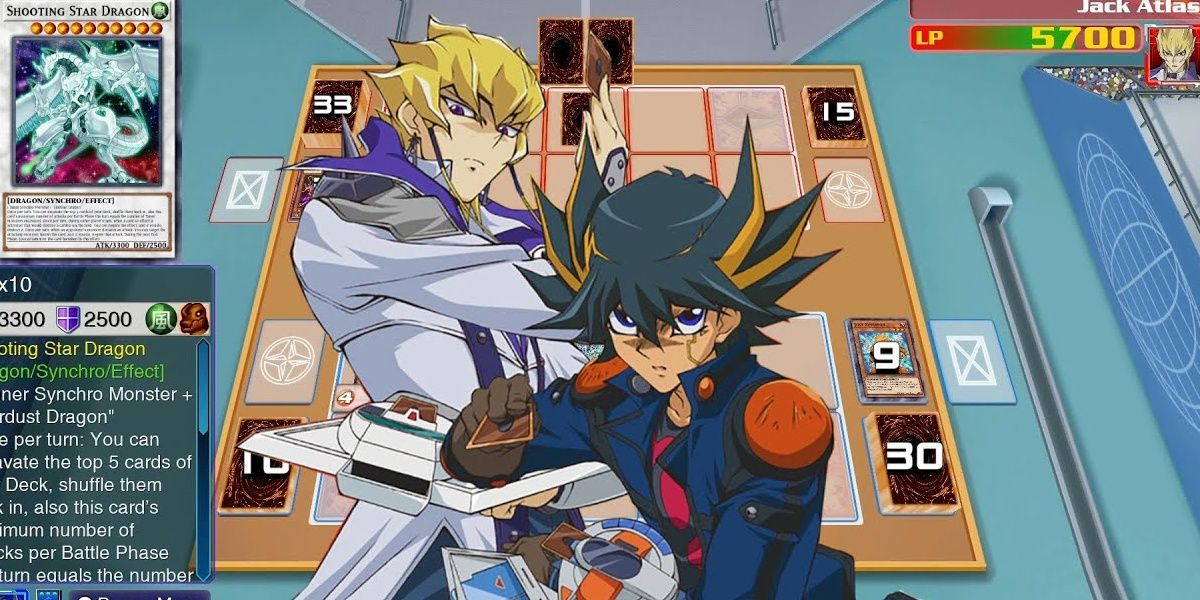 While the pair meet a few times throughout the playthrough of the game, it’s their first reverse duel that seems to challenge the most players. While neither player’s decks could be described as bad, Yusei seems to have a much better overall build.

Occasionally, Yusei is able to synchro summon multiple tough cards in the same turn, and things are only made more hopeless if it’s his first turn. His Scrap-Iron Scarecrow trap card is an effective way to block the player's attempts at destroying his monsters as well. 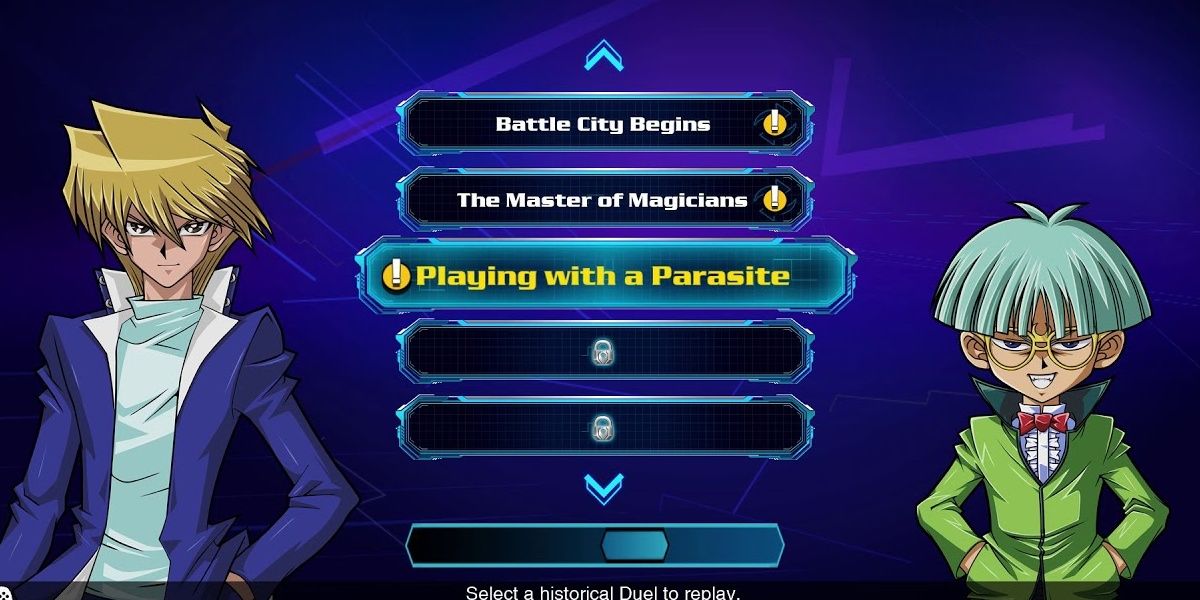 While many duelists in-game decks tend to get better the further into the story players go, Weevil’s decks seem to remain awful. His strategy really doesn’t seem to change much in this duel when compared to his other earlier in the story. Find a way to summon what is widely regarded as one of the worst cards in the game, or find a way to win with garbage cards.

Players were likely pulling their hair out as they replayed the duel over and over. When they finally manage to summon something halfway decent, like Insect Queen, it’s not unlikely for Joey to retaliate with a perfect coin toss from Time Wizard. 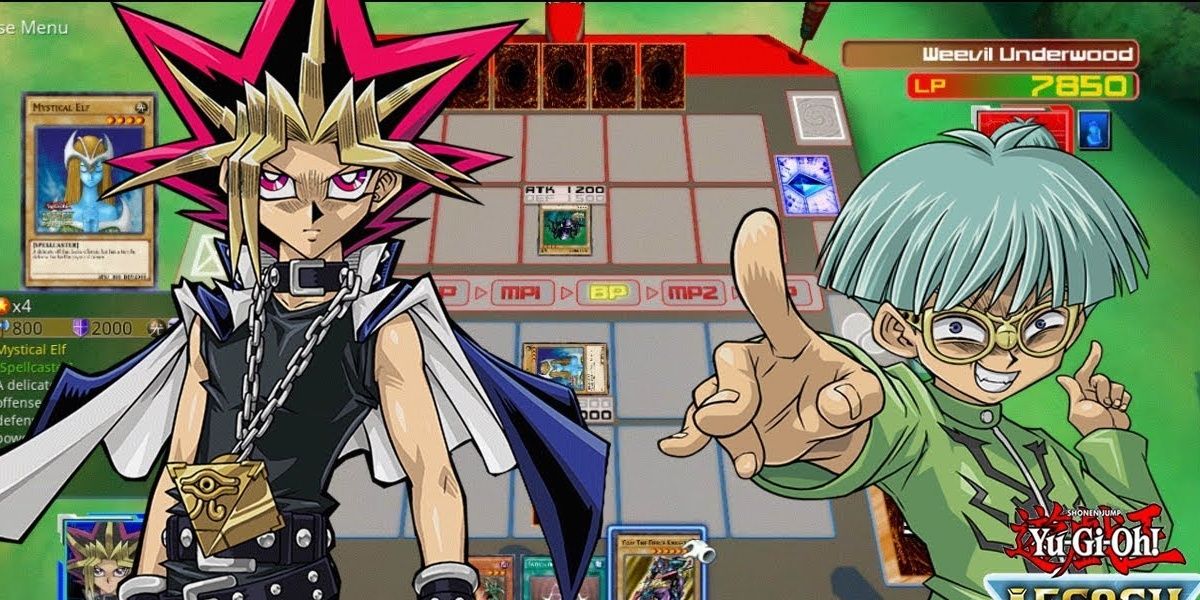 Anyone familiar with Weevil and his most infamous cards knows exactly why playing as the spectacled-villain can be so difficult. While Yami Yugi doesn’t exactly have a spectacular deck in this duel, Weevil’s deck doesn’t even come close to his in terms of viability.

One of the only ways to win this duel is to simply get lucky by having a majority of the cards you need at the start, drawing whatever other cards almost immediately, and praying that Yugi manages to obtain a pile of useless cards while you slowly summon your Great Moth. 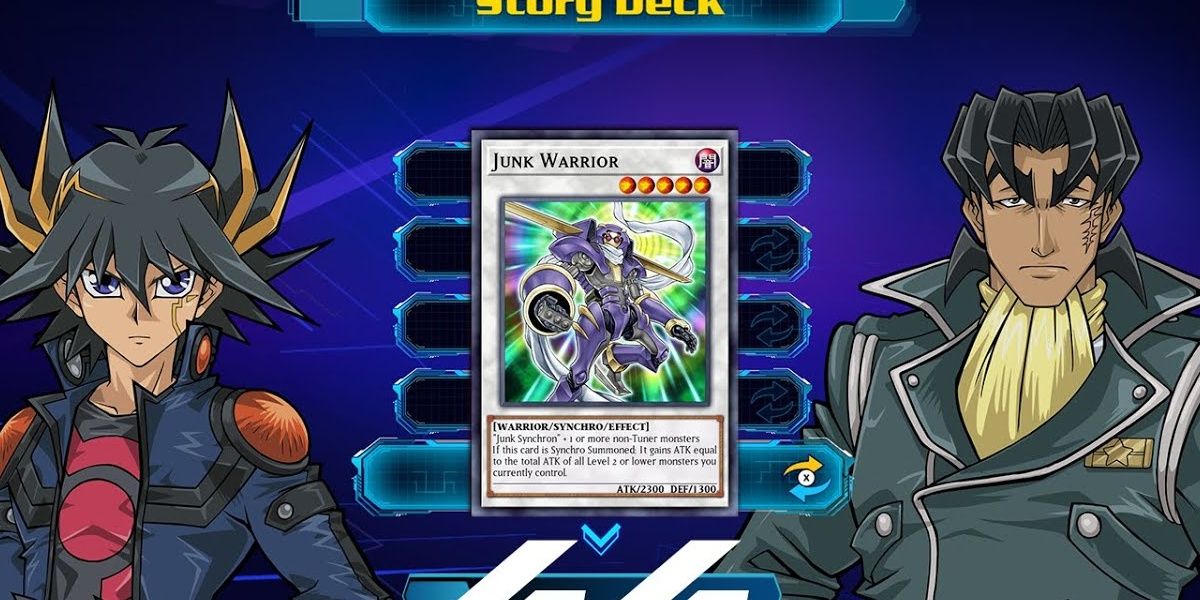 Dueling against Trudge is one of the easier duels in the entire game, so it shouldn’t be all that surprising that when the roles are reversed, things can get difficult. The biggest problem that many players face is the fact that Trudge’s deck is filled with weak cards.

Yusei doesn’t have the greatest deck-build in the game at this point, but he certainly has a much better one than Trudge. There are a lot of players that only manage to actually beat this duel by slowly forcing Yusei to deck out. 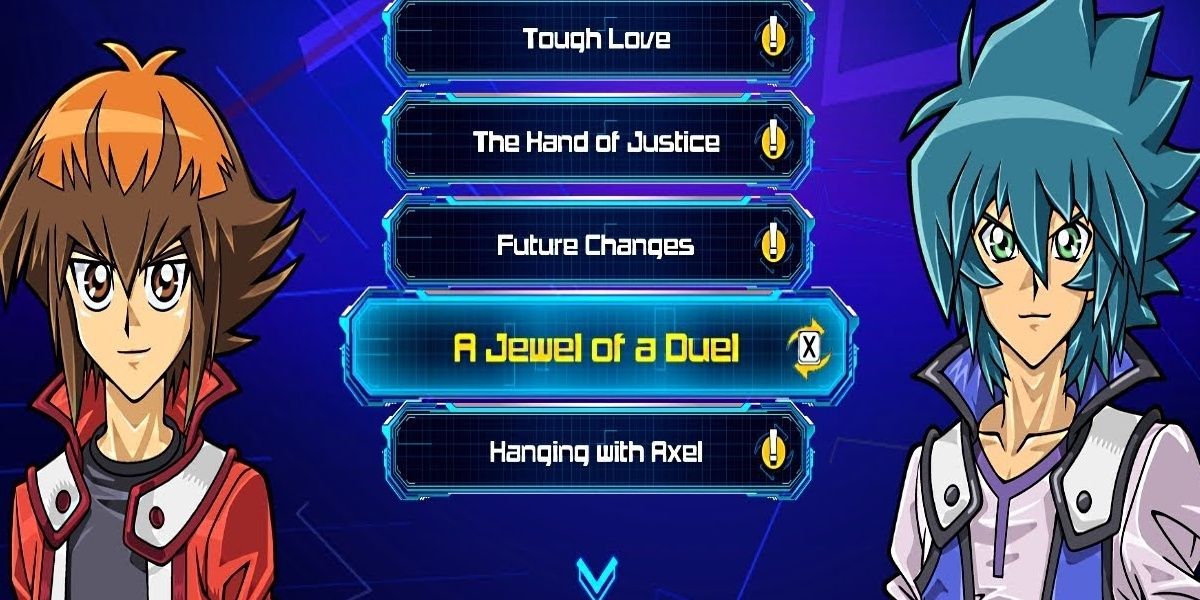 Jaden may be a fan-favorite protagonist from the Yu-Gi-Oh series but in the second half of the GX campaign, his decks are often quite lacking. While Jesse has a relatively strong deck when placed in the right hands, especially against a deck like Jadens, he’s not that hard to duel against.

It’s Jaden’s poor deck builds that really make the second half of the GX campaign feel like it takes forever. Most of his duels boil down to him needing the same combination of cards to keep a fusion version of his Elemental HERO Neos on the field in order to actually destroy any monsters. This duel may end up forcing players to try again, and again to beat a simple deck. 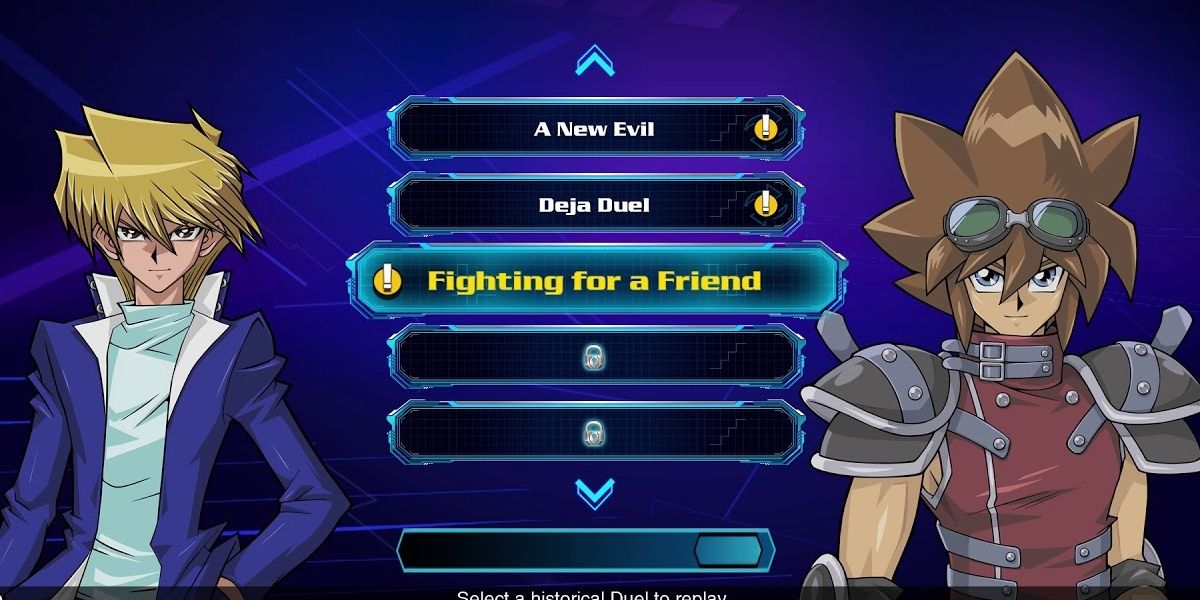 While Joey’s decks in the game are often far from being objectively bad, they’re also pretty far from being the best in the game. He arguably faces his biggest challenge when he’s up against Valon near the end of the first campaign.

Many players report getting stuck on this duel for far too long thanks to Valon’s extremely powerful deck. If the odds are really in Valons favor, his cards can reach dangerous attack levels upwards of 5000 attack with little to do with Joey’s lackluster deck. 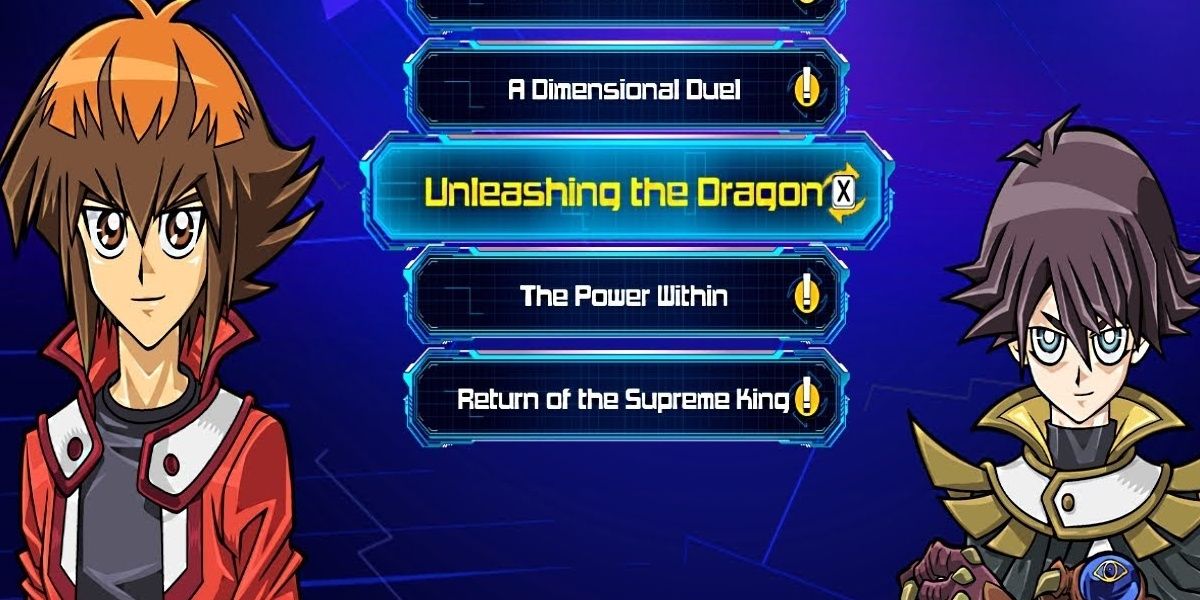 The thing that really makes this duel difficult comes from what can be some brutal RNG and a deck that requires some very specific hands to be successful. When many of the game's story duels are intended to be beaten much in the same way that they are in the anime, things can get very difficult.

Jaden’s less than desirable deck can make it difficult to do much against the powerhouse deck Marcel utilizes. Jaden’s various Chrysalis monsters and admittedly weaker Elemental HEROS make most turns pointless without a specific series of cards. 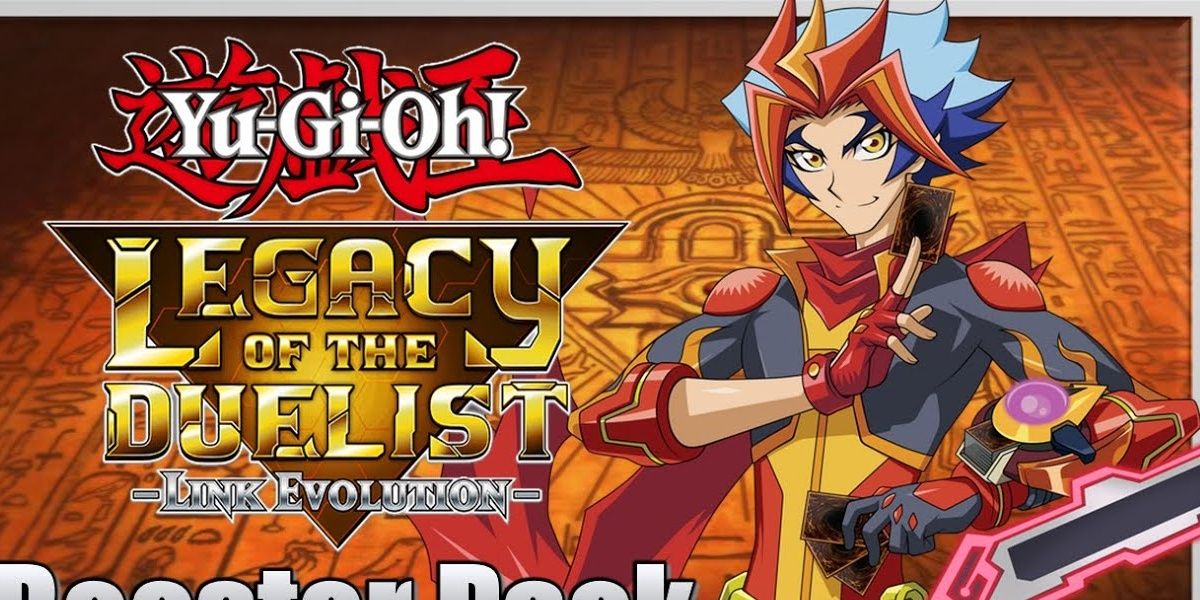 It’s possible that many players recreated and put their own spin on Soulburners deck just because of how effective it can be. Windy’s deck isn’t all that bad, and against most other opponents, it would likely be fine, it’s the Soulburners deck strength that’s the problem.

There are plenty of ways that Windy’s deck could be better, but since it’s not, players often find themselves without any real options against Soul Burner. The key to victory is a lot of luck, hoping that Soulburner can’t get what he needs, and ending the duel as quickly as possible.