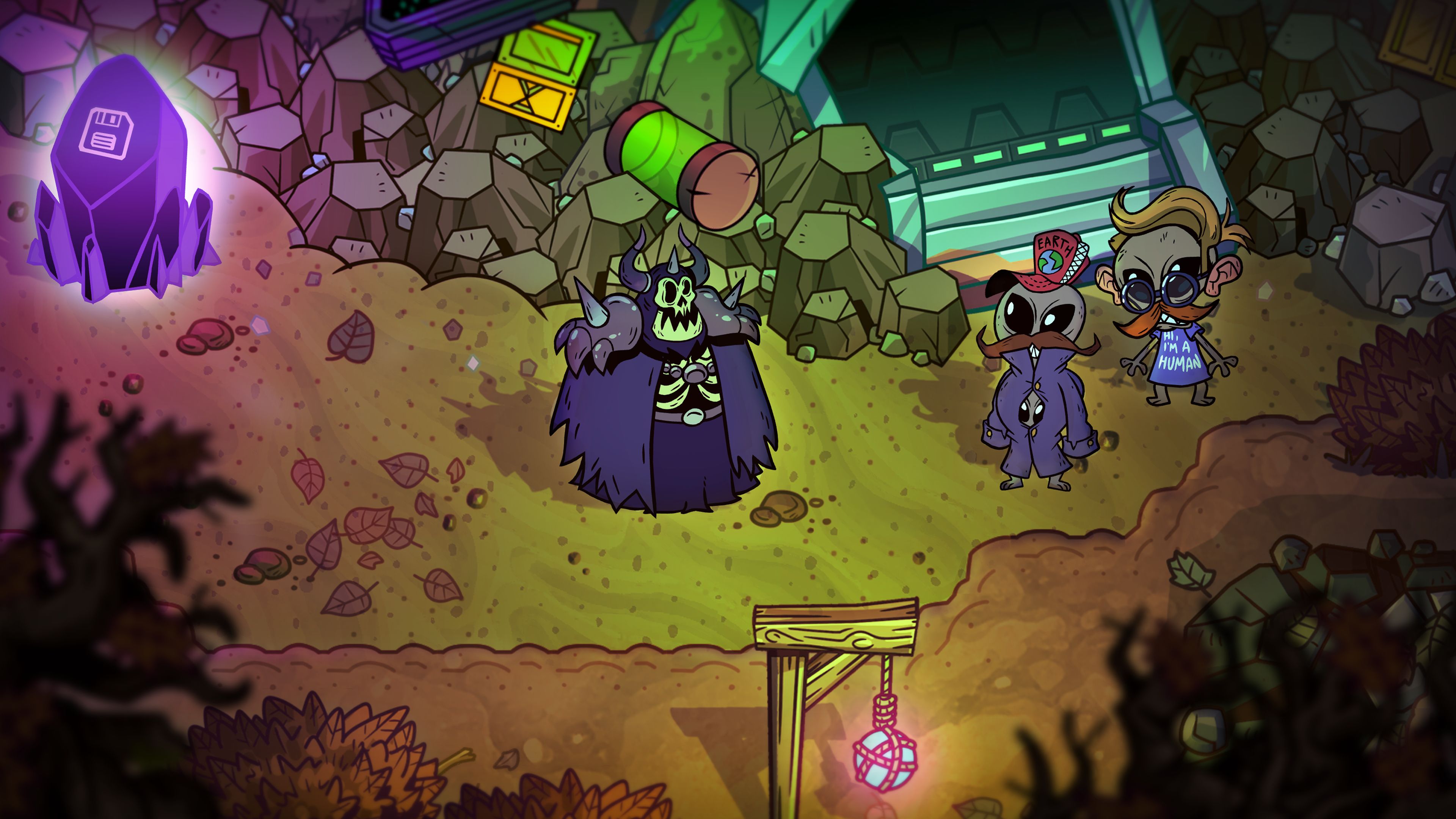 The makers of Guacamelee return with a new action RPG where you get to play as over a dozen different characters, from a slug to a necromancer.

Attempting to deconstruct the role-playing genre has become a popular pastime for many indie developers. Games like Loop Hero are obsessed with creating a more concentrated, often more abstract, experience, that gets to the heart of why the genre is so enjoyable and why its design elements have changed so little over the years. Nobody Saves The World’s key conceit is to focus the constant need to level up and complete side quests on just one goal: unlocking a new form for your hero and then using that to look forward to unlocking the next one after that.

Few recent games dangle a carrot with quite so much verve as Nobody Saves The World, with developer Drinkbox Studios clearly aware of how the desire to unlock something new is always far more rewarding than actually getting it. And so it is that the game’s main gimmick is that you can transform into one of over 15 different forms, from a rat or tortoise to a mermaid or a magician. Each form has their own unique abilities and are far more than just a visual change, such that you’re rarely disappointed about obtaining a new one.

An action role-player vaguely in the style of Diablo, the central appeal of Nobody Saves The World is to unlock all the different forms and so long as there’s always another one to look forwards to it remains compelling. The further you get though, the more you start to realise that the underlying gameplay and structure is just a means to an end and there’s far too much anticipation and not enough payoff.

The story set-up for Nobody Saves The World is very brief, as you awake in a small Zelda style village as a sort of featureless, dead-eyed clone. Who or what you are is a mystery since, in classic role-playing game tradition, you have amnesia, although there’s very little storytelling for the rest of the game and the couple of lines of text that the various non-player characters are given is only sporadically amusing.

The Zelda comparisons linger for a little while, not least because the initial set piece is a parody of the opening to A Link To The Past. In it, you quickly gain possession of a magic wand, which allows you to transform into a rat (which can fit through small spaces), a ranger (who can fire arrows), and a guard (a generic knight). The guard is the obvious one to start with, as his sword attacks work very similarly to the top-down Zeldas, but as you level up he also learns new moves like an area of effect stomp and a shield bash.

Levelling up the rat you find it’s a lot more useful than it first seems, with a basic bite attack and another that regains a small amount of health. The moves also confer poison damage, if you land enough attacks, with the game subsequently introducing other status attacks like stun and burn. Poison is also labelled as a ‘dark’ attack and can be used to break wards on enemies that are otherwise immune to damage, with, again, other ward types introduced as you continue.

Many of the forms can only be unlocked once one or more previous ones have been levelled up to a certain point, which means you have to end up playing as all the forms for a fair amount of time, which reveals that even seemingly useless characters like the horse or ghost are actually a good deal of fun, with their own unique twists (the horse can only attack things behind it, for example).

Each form has its own signature attack and passive ability, but they can also be mixed and matched with abilities from the other forms to create a character that’s able to perform all manner of different status attacks and special moves. It’s a great system, that’s cleverly thought out and very flexible, but it does have one important flaw: the combat it enables is extremely dull and repetitive.

Despite all the excellent work with the abilities and different characters the combat doesn’t involve anything more complicated than keeping your finger down on the attack button. Crowd control is important but beyond making sure you don’t get cornered, and dodging the occasional projectile, there really isn’t much tactics necessary at all; not given the very limited artificial intelligence of the enemies. This is underlined by the horribly dull boss battles, which are always anticlimactic and are usually just a slightly bigger version of a monster you’ve fought a dozen times before.

It doesn’t help that the game’s art style isn’t at all suited to this kind of action. In isolation it’s quite a fun cartoon style but everything looks like 2D cut-outs and there’s no sense of physicality when you hit anything. Very quickly you start to play the game on autopilot, because as long as you’re at an appropriately high level the combat is actually very easy. Except if you get caught out in a dungeon you realise that you’ve got to restart the whole thing again, like some kind of half-hearted roguelike.

The mechanisms within Nobody Saves The World are great but the combat and structure do nothing to support them. If anything, the game world is too large and it’ll take a good 20 to 30 hours to see everything, even though your enthusiasm will barely last a quarter of that. The game is in desperate need of more story elements or some proper puzzles, or even just some genuine variety in the dungeon designs (like the roguelike elements, there’s a very half-hearted attempt at randomising the layouts, which makes them all seem very samey).

Few games get everything right, but it is unusual to come across one where the internal mechanics are so compelling and yet the way they’re taken advantage of by the gameplay is so lacklustre. Nobody Saves The World may be more fun in co-op but since it’s online-only with no matchmaking we haven’t been able to test that – and given the visual mess the game can be in single-player we can only imagine how much more confusing it’d be with two players.

Nobody Saves The World has a number of interesting elements but in the end they’re largely wasted on a repetitive and frequently boring experience. The degree to which it manages to hide this, by repeatedly convincing you that the next unlock is worth slogging on for, is impressive but it’s really just hiding the fact that the gameplay is every bit as hollow as the main character.

Related posts:
01/18/2022 News Comments Off on Nobody Saves The World review – change yourself, change the world
Hot News
It’s Time For Oblivion’s Shivering Isles To Make A Comeback
MultiVersus Dataminers Have Gained Access To A New Original Character
Why 5G and the edge could be the keys to the metaverse
lisinopril 5mg half life
Would Better Call Saul Be Even Better If It Wasn’t A Prequel?
Recent Posts